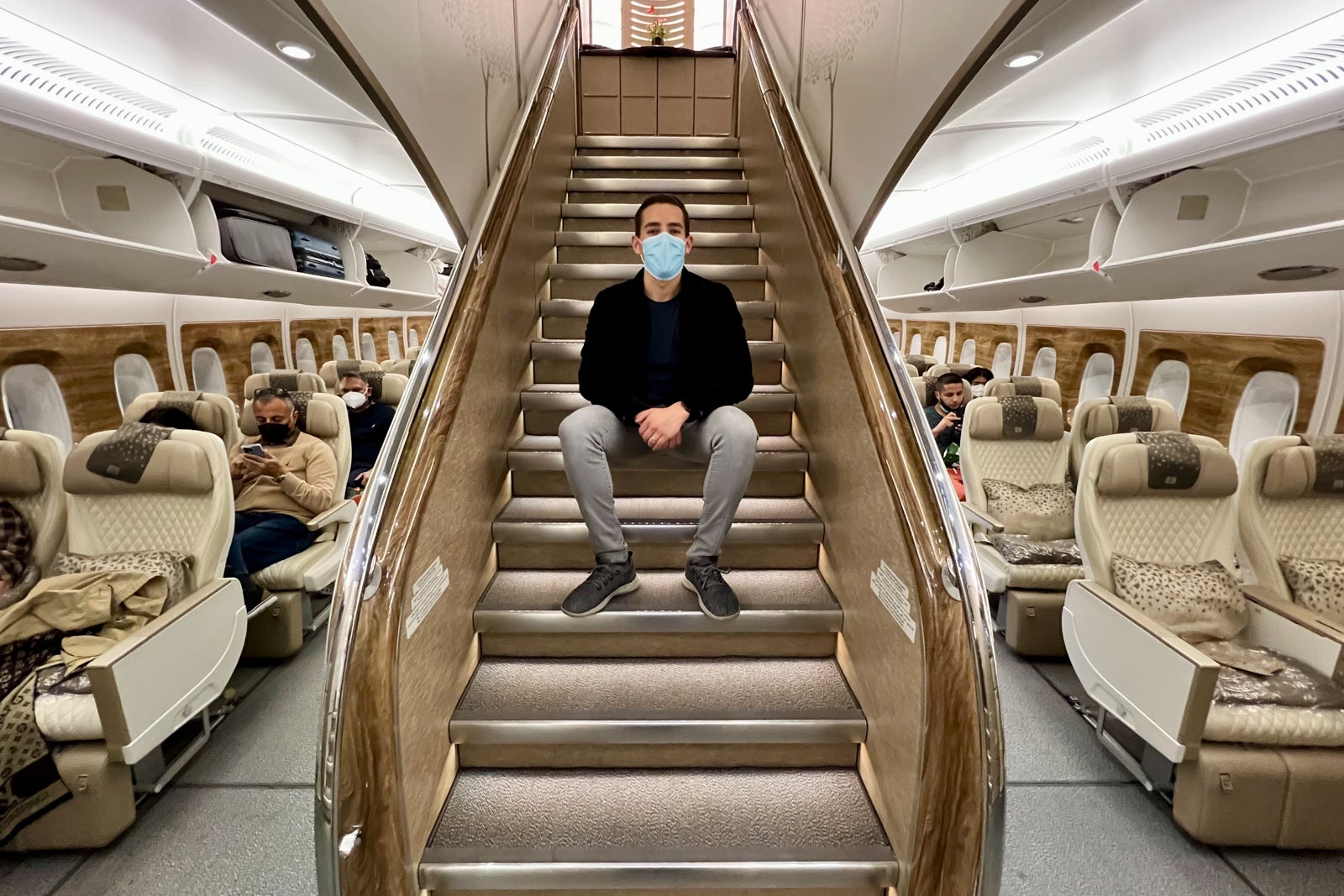 It’s hard to believe that another year is in the books. For so many, myself included, it feels like we’re living in the shadow of 2019, well before the pandemic upended our lives.

After receiving my two Pfizer vaccines earlier this year, one of my first priorities was making time to create new travel memories, both by visiting some old favorites and discovering some new ones too.

As I reflect on the year, I’m proud of all the ground I covered, even if my “travel stats” aren’t what they once used to be. Like in years past, I'll highlight some top stories from 2021, and what’s on the horizon for next year.

1. The year of premium economy

This year, airlines continued to expand their premium economy offerings. With business-class products getting fancier (and fares getting more expensive), a market has emerged for a product that sits between coach and biz.

Airlines have been quick to answer that call with premium economy, but each carrier is thinking about this new offering in a very different way.

Here in the U.S., Delta has most recently led the charge to retrofit a large swath of its Airbus A330 and Boeing 767 fleets with premium economy, promising that all European routes next summer will feature this new cabin.

Personally, I managed to snag first-look tours at both of these newly retrofitted jets in Atlanta just days after the planes left the factory.

And on my most recent work trip, I flew to Dubai in Emirates' brand-new premium economy cabin, which is shaping up to be one of, if not the, nicest in the world.

It was a big year on a personal level. As many of my longtime followers know, I got married in August.

As one of TPG‘s most prolific travelers, I couldn't not take an epic honeymoon. And that’s exactly what my wife and I did – we spent three weeks on the road visiting three incredible destinations (Italy, Tanzania and the Seychelles) with top-notch flights and opulent five-star resorts.

Highlights included back-to-back stays at two incredible Four Seasons properties, as well as an Emirates first-class flight to Milan and an ultra-long-haul hop from Doha to New York in Qatar's legendary Qsuite.

3. A trifecta for JetBlue

Of the U.S. airlines, JetBlue had arguably the biggest year — and I was there to experience it all.

It started in January after the New York-based carrier took delivery of its new domestic workhorse, the Airbus A220. I got a first look at this flyer-friendly jet, and then fly it a few months later on its inaugural revenue flight from Boston to Tampa.

Weeks later, the airline was back in the news for its dramatically overhauled and much-improved Mint business-class product, which it begin outfitting on a subset of its newest Airbus A321 aircraft.

I was there once again, with my former colleague Zach Honig, on the inaugural flight to experience what's easily the best domestic business-class experience.

Finally, the airline ended the year with its biggest expansion yet: its first transatlantic flights to London. I was honeymooning during that inaugural but managed to try JetBlue's new service a few weeks later in the carrier's extra-spacious Mint Studio.

The experience was so good that the airline earned this year's TPG award for the best new business-class product.

4. A perfectly timed trip to the Holy Land

Speaking of returning to old destinations, I was eager to visit Israel as soon as the country reopened its borders this fall. Thankfully, I jumped at the opportunity before the omicron variant shut down the country once again.

While much of my reopening coverage isn't currently applicable, this trip reminded me of the importance of taking advantage of travel opportunities when they pop up. Had I not taken my trip, I would’ve missed out on the short window to visit one of my favorite countries.

To get there, I flew on American Airlines' new flagship long-haul route from New York, which offers an inconsistent experience for those flying in the pointy end of the plane.

During my trip, I arranged a visit to El Al's headquarters (the flag carrier of Israel), which included a tour of the airline's newest Boeing 787-8 Dreamliner, which I'm eyeing for my next visit to the Holy Land.

I formally sit on the aviation team at TPG. When I’m not in the air, I’m usually reporting on all-things airlines (with stories on travel and technology mixed in, too).

This year was especially big in the domestic aviation market, with the launch of three new carriers: Avelo, Breeze and Aha!.

The first airline to launch this year, Avelo, is the brainchild of former Allegiant Air executive Andrew Levy. His new ultra-low-cost carrier commenced operations in Burbank on the West Coast, and just recently launched its first tranche of new routes from its second base, in New Haven, Connecticut, on the East Coast.

The biggest launch of the year goes to Breeze Airways, the new start-up carrier from serial airline entrepreneur David Neeleman, perhaps most famous in the U.S. for founding JetBlue.

His airline has since expanded in small- and medium-size markets and even recently took delivery of its first Airbus A220, which is equipped with a whopping 36 first-class recliners.

Finally, there’s Aha!, a new leisure brand from long-time regional operator ExpressJet Airlines. This was the only inaugural I couldn’t make in person, but you’ll find the airline’s 50-seat Embraer 145 regional jets hopping around the West Coast from its Reno/Tahoe (RNO) base.

Earlier this year, United announced an innovative new partnership with Landline, a bus company that allows the airline to offer one-stop service to Breckenridge and Fort Collins in Colorado, with flights to Denver and onward bus connections to these two destinations.

I couldn’t wait to give the service a try, and that opportunity came in May during a trip out west. I was the only passenger on the 35-seat luxury motor coach, and I even got to experience United‘s exclusive check-in area in downtown Breckenridge when I arrived.

The service was incredibly seamless that I’d consider using it again this winter. I received my boarding passes during the online check-in process, and my checked bags (and skis) were automatically transferred to the bus, which boarded from a dedicated airside gate in Denver's Concourse A.

This year was also big for airport lounges.

It started with the much-anticipated opening of the new American Express Centurion Lounge in Denver and followed shortly thereafter with an expansion in Las Vegas, and two new outposts in LaGuardia‘s new Terminal B and London Heathrow's Terminal 3.

Capital One's first lounge opened in Dallas/Fort Worth (DFW) in November, which sets a high bar for any future airport lounges.

My 2021 highlights didn’t just include new airlines, planes or lounges.

In June, I visited the new Resorts World hotel complex in Las Vegas, along with two of my TPG colleagues, Summer Hull and Scott Mayerowitz.

Resorts World Las Vegas is a 3,500-room hotel complex, with three Hilton hotels all under one roof. We put everything to the test, from the rooms to the pools to the amenities. I can even confirm that the blackjack dealers were extra generous during our stay.

My travel tech got a big upgrade this year, starting with the new iPhone 13 Pro Max.

I've been using Apple's latest flagship device as my go-to for capturing all my airplane content. The phone's larger battery and improved cameras have made the upgrade well worth it.

I recently started using AirTags to track my gear, and I've been impressed by how accurate the trackers are in airports and hotels.

Finally, I added a new portable power pack made by Anker to my backpack this year, and I haven't run out of battery when I'm on the go yet. You can find my full list of travel-themed accessories in this year's holiday gift guide.

Elite status: This year, most major loyalty programs reduced the elite qualification metrics to earn (or retain) status. In terms of airlines, I requalified for American Executive Platinum and United Premier 1K, as well as JetBlue Mosaic. For hotels, I earned World of Hyatt Globalist status and Marriott Bonvoy Platinum.

While 2021 turned out to be a big year for me, it’ll be interesting to see where I land next year. With the surge in the omicron variant, international travel could be off-limits for the first few months of 2022.

Hopefully, the pandemic will subside early next year, as I'd love to try some of United's new European routes, including to Palma de Mallorca, Spain, and Bergen, Norway. I'm also planning to fly Delta's new long-haul route from Boston to Tel Aviv when it launches in May.

Related stories
Bask Bank raises the mileage earning rate on its AAdvantage savings account — what you need to know
Targeted Premier 1K members eligible for bonus miles when checking in and checking a bag on the United app
Current airline elite status match and challenge options you should know about
Business-class deals are back: This month’s Flying Blue promo awards
Featured image by (Photo by Zach Griff/The Points Guy)
Editorial disclaimer: Opinions expressed here are the author’s alone, not those of any bank, credit card issuer, airline or hotel chain, and have not been reviewed, approved or otherwise endorsed by any of these entities.