The ultimate guide to Qatar Qsuite 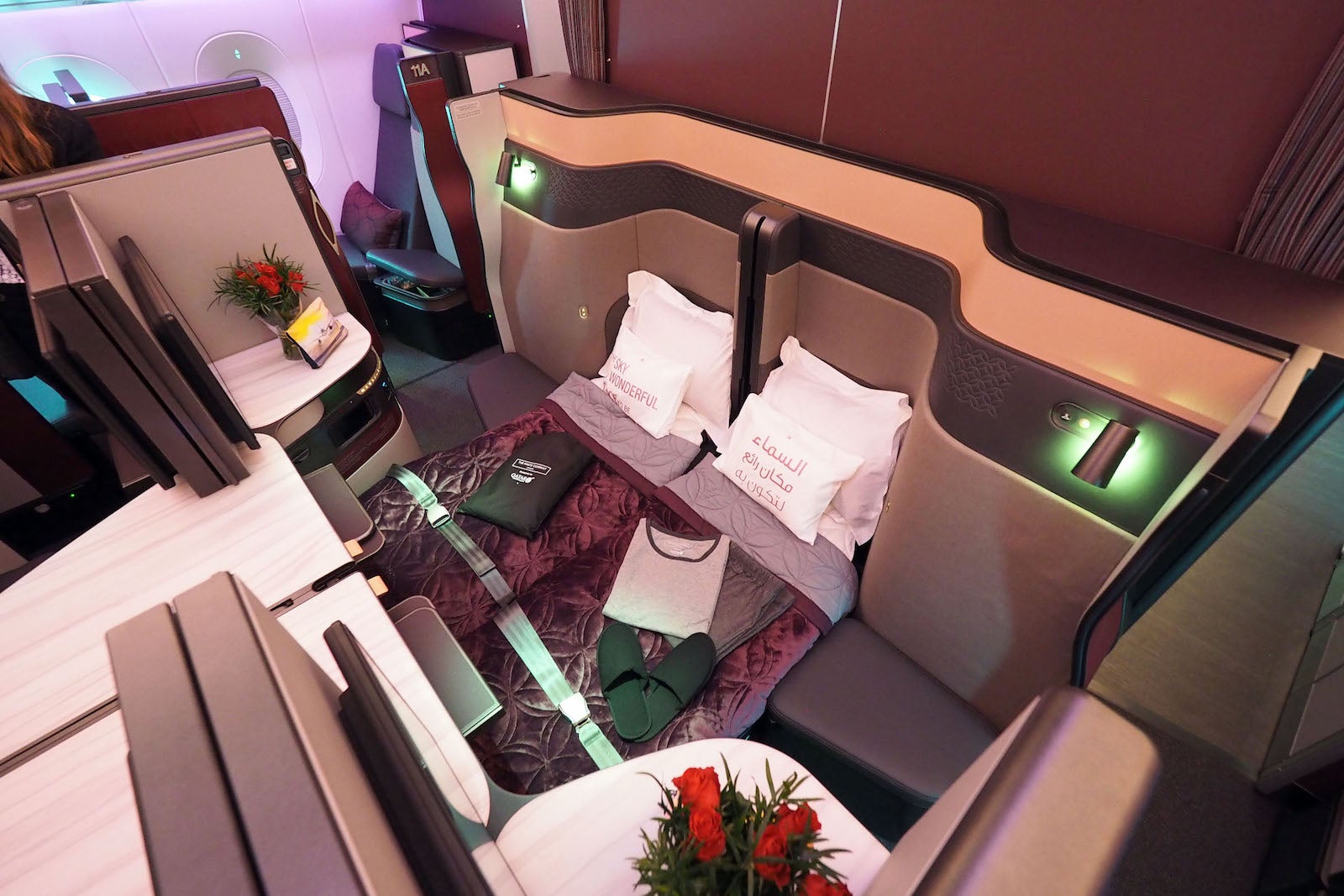 Editor’s note: This guide is regularly updated with the most current information.

Qatar Airways has boasted some of the world’s best business-class seats and service for the last decade. However, the airline raised the bar with the unveiling of its revolutionary Qsuite in March 2017. These were the first suite-style business-class seats, complete with closing doors and layouts that could be configured into four-person family or work areas and even double beds.

What was even more astonishing was the speed with which the airline rolled out the suites aboard its fleet. The first flight with them went into service in June 2017, just three months after the unveiling.

Since then, Qatar Airways has put the Qsuite into service on many of its flagship routes, such as those between its hub at Hamad International Airport (DOH) in Doha, Qatar, and New York's John F. Kennedy International Airport (JFK), Heathrow Airport (LHR) in London and Paris-Charles de Gaulle Airport (CDG), among other destinations. Here’s why you’ll want to experience the Qsuite and how you can book it using miles.

Qatar Qsuite appears on versions of four different aircraft types: select Boeing 777-200LRs, 777-300ERs, Airbus A350-900s and all of Qatar Airways’ A350-1000s. What might be confusing for flyers, though, is that Qatar Airways also flies 777s and A350-900s with older seat types. Luckily, we have a guide that explains how to tell if your flight has the new suites on them, and we’ll get into the specific routes and flight numbers they’re currently on below.

Let’s get down to what makes these suites so special. Like many of the other best business-class seats out there, they are arranged in a staggered 1–2–1 pattern.

If you’re confused by the configuration, you’re not alone. But check out your flight’s seat map either on SeatGuru or our sister site ExpertFlyer (owned by TPG’s parent company, Red Ventures) and you can easily figure out what your seat will be like.

This is what the A350-900s with the old reverse-herringbone seats look like:

And finally, this is what the seating configuration will look like if Qsuite is aboard your flight:

Certain blocs of Qsuites in the center section can be combined into a few configurations. The seats that are set close together can become a double bed for couples or families traveling together.

There are also quad blocs in the center section where four seats can be opened up to create a coworking or leisure space for groups traveling together.

In addition, Qsuite has technological bells and whistles like light-up “Do Not Disturb” signs and 21.5-inch entertainment monitors with touch screen controls and over 4,000 menu options.

The media panels have universal power ports, USB ports, HDMI and contactless NFC capabilities so you can stream preselected playlists from the Qatar Airways app on your smartphone over the system.

Which routes can you currently fly in Qsuite? Many routes were suspended or altered during the pandemic, but these are the available routes with flights operating to/from Qatar:

A caveat for all of these: The airline swaps out aircraft from time to time. So when booking, be sure to verify the seat map for your flight carefully. Then keep checking on it before your actual travel dates to make sure your plane hasn’t been swapped out for a model with different seats.

Because of its membership in Oneworld, you have a few choices for using airline miles to book awards on Qatar Airways. Here are the four top ones with sample mileage requirements between Doha and various destinations.

Have you been stocking up on AAdvantage miles all these years? Now could be your chance to put them to use.

After Qatar Airways adopted Avios as its loyalty currency, British Airways matched its award pricing and lowered fuel surcharges. You will find identical award pricing and similar taxes and fees if you book with either Avios program.

This program devalued in June 2018, but might still be worth looking into for Qsuite awards. There isn't a published award chart for partner awards, but you can price out your tickets on Asia Miles' website.

One major downside to booking with Asia Miles is high taxes and fees. On a one-way flight from New York to Doha, you will pay $509 in addition to the miles you spend.

Searching for and booking awards

We have several posts on this topic, including How to Search and Book Qatar Airways’ Qsuite With Miles. However, as a refresher, the best way to search for Oneworld award availability is through the British Airways or Qantas websites.

If you're booking with American AAdvantage, you can also search on American's website. However, it's worth double-checking your results with the British Airways or Qantas website, as American's website sometimes fails to show all available award space.

If you find a flight on British Airways' website that isn't bookable on American's website, call American’s AAdvantage desk to book it. If you plan to use Asia Miles, you can search availability through Asia Miles’ own award search engine instead.

Keep a few things in mind before going on a mad dash searching for awards on all these routes. From my own personal experience, Qatar Airways awards tend to show up either far in advance or close in, but generally not in the few months out when most of us like to plan our trips.

The airline also tends to release more award space on newly-announced routes or when it swaps out aircraft on a route, so keep up on the news here on TPG to help you snag a seat on the route that you want.

Finally, be persistent. If you have dates and redemptions in mind, just search every few days and see what might come up. You might be surprised to find award seats released on some of the flights you’re looking for.

So as not to end on a down note, though award space can be scarce, it is still available — even on premier routes like between Doha and New York and Doha and London. Here are a few sample awards I found to whet your appetite.

And one in the opposite direction:

It may be more difficult to find space to the U.S., but now that all North American routes are flying Qsuites your chances improve.

Qatar Airways’ Qsuite offers some of the best (if not the best) business-class seats in the world. Closing doors, fluid configurations and top-notch service all make a flight in them nothing short of memorable. Luckily, it’s also possible to book them with a number of different types of partner airline miles. With a little tenacity and savvy, you can book your own award and enjoy this truly unique experience for yourself.

Featured image by (QSuite. Photo by Zach Honig/TPG)
Editorial disclaimer: Opinions expressed here are the author’s alone, not those of any bank, credit card issuer, airline or hotel chain, and have not been reviewed, approved or otherwise endorsed by any of these entities.