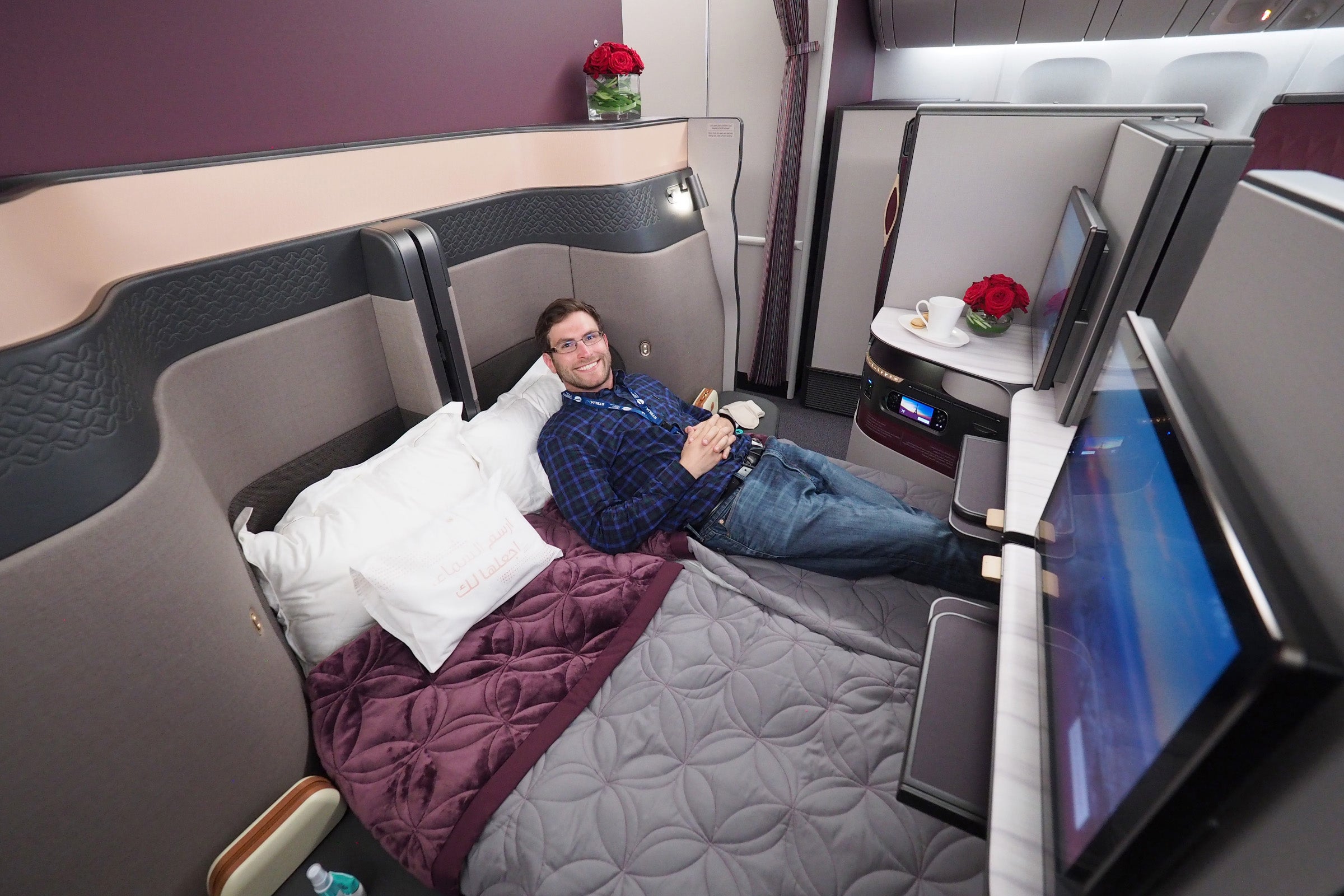 Suite Spot: Ranking the World's Best Business-Class Products
This post contains references to products from one or more of our advertisers. We may receive compensation when you click on links to those products. Terms apply to the offers listed on this page. For an explanation of our Advertising Policy, visit this page.

The race for the world's best first-class may be getting a bit more attention — following some pretty incredible launches from Emirates and Singapore — but as those carriers focus most of their efforts on the pointy end of the plane, other airlines are investing significant sums in business class, instead.

In fact, some of these products are so spacious, private and otherwise impressive that they're easily more appealing than the seats you would have found up in first class just a few years back. In my opinion, the best of these new options incorporate a sliding privacy door, or a wall high enough to add comparable privacy.

Now, some business-class seats offer loads of appeal without a high wall or integrated door — such as Singapore's new A380 biz, which sports what's essentially a double bed at every row — but those products, including the new Delta One Suite on the A350, Qatar Airways' Qsuite and the Apex suite available on several carriers are without a doubt some of the industry's top picks.

You'll generally have a similarly great experience flying any of those three aforementioned suites, but since it's more fun to crown a winner, here it goes...

Of course, whenever an airline throws around the term "suite" when describing its new business class, a sliding door is probably what comes to mind. If elevated privacy is key, you're going to want to pick one of two products to offer this industry-leading amenity: Qatar's Qsuite and the new Delta One Suite, which is available exclusively on the airline's A350s.

Qatar's door slides all the way shut, while Delta's stops short about an inch before the wall. The Apex suite, meanwhile, doesn't offer a door, but the divider wall and staggered configuration makes window seats especially private.

While I've only experienced Delta's A350 while traveling within the US, TPG got to fly the product to Asia, and found it to be comfortable both as a seat and a bed. The Apex suite is also quite comfy, but some may find the window seats to be a bit cramped.

Qatar's Qsuite is by far the most versatile, thanks to its unique design. You can set up a side-by-side double bed, and even combine two rear-facing suites with two positioned toward the front, forming what's called a "quad."

While Qatar's Qsuite is only available on a handful of planes right now and the Delta One Suite can only be found on the airline's Airbus A350s, there are several carriers and aircraft flying the Apex suite, including:

You'll also find far more award availability for the Apex suite — Korean Air's in particular — than you will for the other two products. The airline's Apex-equipped 747s and Dreamliners are offered somewhat inconsistently, but you can often find the product on flights between Seoul (ICN) and Atlanta (ATL), Honolulu (HNL) and San Francisco (SFO). Flights between the mainland US and Korea start at 62,500 Korean Air miles each way. Korean Air is a transfer partner of both Chase Ultimate Rewards and Starwood Preferred Guest.

Japan Airlines offers Apex on its 777-300ERs and 787-9s, which fly between Tokyo (NRT/HND) and Boston (BOS), Dallas (DFW), Los Angeles (LAX), New York (JFK) and San Francisco (SFO). Availability can be hit or miss, depending on the route, but you can book any of these flights for just 60,000 AAdvantage miles each way.

Oman Air doesn't fly to the US, but you can fly the airline's Apex suite between Muscat (MCT) and Paris (CDG), Frankfurt (FRA) and Bangkok (BKK).

Meanwhile, there's occasionally decent award space on Qatar's retrofitted 777-300ERs, currently flying on US routes between Doha (DOH) and New York (JFK), Washington, D.C. (IAD) and soon Chicago (ORD), along with the Airbus A350-1000 and the latest version of the A350-900. You can book these flights for 70,000 AAdvantage miles each way.

Delta only offers its suite on the A350, and routes remain fairly limited. The carrier releases awards on almost all flights, but you'll pay a small fortune to redeem — 375,000 Skymiles one-way to Tokyo, anyone?

So which is best?

I recently declared Qatar's Qsuite to be the world's best business-class product, and after even more careful consideration, there's really no question — this is the product to beat.

So, Qsuite is Number 1. After that, my vote goes to the Delta One Suite, since I really do love having a sliding door — it just makes such a difference when it comes to privacy. Rounding out the Top 3 is definitely the Apex suite, with Japan Airlines' version coming in first, primarily thanks to a gigantic 23-inch in-flight entertainment screen, followed by Oman Air's, due to the slick design, with Korean Air's model finishing out just a hair behind. I think they're all pretty fantastic, though.