The ultimate guide to Delta One Suites 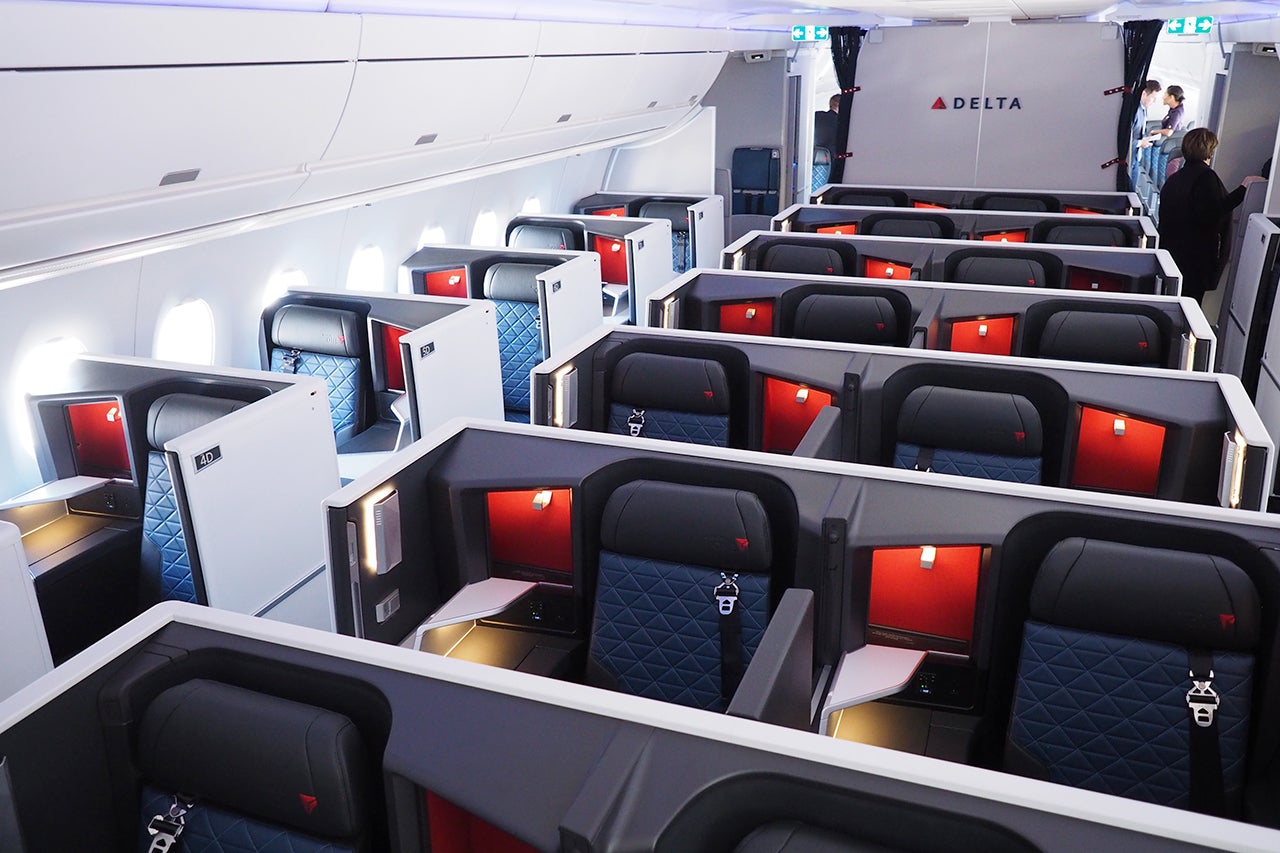 Delta made global headlines as the first airline in the world to unveil an all-suites business-class cabin, where each seat had its own closing door for privacy. Before the debut of the first Airbus A350 with Delta One suites in October 2017, however, Qatar Airways beat Delta to the punch with its own all-suites business class known as Qsuite, which began flying a few months before. Since then, full enclosed business-class products have become more popular with airlines including British Airways and Virgin Atlantic, ANA and more.

Delta put the suites in its new Airbus A350s and A330-900neos, then began retrofitting a modified version of the suite on other long-haul jets in its fleet including the Boeing 777, which has since been retired entirely from Delta's fleet because of the coronavirus pandemic. It's also been working on a retrofit program for its Boeing 767-400ER aircraft which are currently flying on the most-premium transcontinental domestic routes as well as several transatlantic flights from a couple of the airline's hubs.

Throughout the pandemic, numerous countries have maintained strict travel restrictions, making international travel unpredictable and flights subject to frequent aircraft and schedule changes. As we look to an end to the pandemic, though, we could soon start to see airlines reestablishing their international schedules with more regularity and predictability in terms of aircraft serving a given route.

For now, though, let's take a look at where you'll find the Delta One Suites, the aircraft they’re on, and how you can use miles to book them.

Delta's Airbus A350 aircraft are being delivered new with 32 Delta One Suites while the new A330-900neos have 29 Delta One Suites. Retrofitted 767s have 34 suites (compared with 40 old Delta One seats). On all of them, Delta One is in a single cabin at the front of the aircraft, so your experience should be pretty similar from plane to plane.

We've compiled a list of the routes Delta is flying with Delta One Suites aboard at the time of publication.

Note that many of these routes are still not operating "regularly" as they were before the pandemic, and there are others that operated before the pandemic that are still suspended altogether. Delta's begun to slowly add international flights back into its schedule, but we won't see a more complete reinstatement of its international route network until countries begin lifting travel restrictions.

Seattle is the de facto hub for Delta's Airbus A330-900neo. You can find the aircraft scheduled on the following routes:

Last but not least, you can find a doorless version of Delta One Suites on certain retrofit Boeing 767-400 aircraft. The first retrofit aircraft took off on July 17, 2019. Here are the routes that you'll find this aircraft type scheduled now:

Further Reading: 8 reasons Delta One is my new go-to way to fly to Asia

The suites themselves are fairly comparable across the A350 and A330-900neo though there are design differences on the newer iterations of the suite on the A330-900neos that those with a keen eye will notice.

Delta One on the retrofit 767-400 doesn't feature sliding doors at each seat, but they offer more privacy than their counterparts on the 767-300 and have finishes that bring them in line with the new A350s and A330-900neos.

On all of the jets, the suites are arranged in a staggered 1–2–1 configuration. Their footprint is basically the same as the Delta One business-class seats on the rest of the fleet. The suites on the sides of the cabin alternate between being closer to the aisle and closer to the window. Those in the center of the cabin shift either right or left of the preceding row to maximize seat pitch.

Passengers can illuminate "Do Not Disturb" indicators, adjust their own lighting and take advantage of numerous personal stowage areas.

Business-class passengers can enjoy hallmark Delta amenities including Tumi kits with Le Labo skincare products, over-ear headphones and Westin Heavenly In-Flight Bedding. Menus created by celebrity chefs like Linton Hopkins and wines chosen by the airline’s sommelier are all presented with the airline’s Alessi glassware, plates and cutlery. Though note that in-flight service and amenity offerings during the pandemic may be altered.

Though we have found a few incredible award deals on flights featuring Delta One Suites, even on long-haul routes, finding low-level awards can be challenging, if not impossible. All the more so since Delta stopped publishing award charts and switched to a dynamic pricing model for award tickets.

Luckily, Delta.com does have a few useful award-search tools that make the process easier. Be sure to use the flexible-dates calendar to look for awards five weeks at a time. And if you’re just searching routes where you know an A330-900neo, A350, or 767 with the suites is in service, select the option for nonstop flights so you can narrow down your query quickly.

Now for the good news: It’s not hard to tell when low-level award availability exists. The bad news? For the most part, Delta prices flights in suites at exorbitant levels, ranging from 280,000 to 505,000 miles each way. Yes, you read that correctly.

However, there are dates when you’ll see noticeably less-expensive awards. Those are your "saver-level" ones, and ones that should (mostly) be bookable using partner currencies like Air France-KLM Flying Blue miles or Virgin Atlantic Flying Club miles.

If you want to use miles to book Delta One Suites, you’ve got a few choices.

Or consider applying for one of Delta's cobranded credit cards (terms apply):

Virgin Atlantic shocked those of us in the points-and-miles world when it announced a massive devaluation to its partner award chart for Delta flights. After clawing back some of the announced changes, Virgin Atlantic Flying Club remains a solid choice for booking Delta One awards between the U.S. and Europe, especially if you can take advantage of frequent transfer bonuses from its credit card partners.

However, the same doesn't ring true on Delta One flights between the U.S. and Asia or within the U.S. Whereas a one-way Delta One flight between Atlanta (ATL) and Tokyo (HND) used to cost 60,000 Virgin Points, now it'll cost you 165,000. If you're booking a round-trip flight, that is a whopping 175% increase.

While searching for awards on Virgin Atlantic's site is pretty straightforward, the award availability it displays generally does not match up to what you'll see on Delta.com. So if you plan to use these miles for a ticket, you're better off just searching right on VirginAtlantic.com or calling their Flying Club customer-service desk.

If you are considering booking a Delta One flight through Virgin Atlantic, remember the program is a transfer partner of American Express Membership Rewards, Citi ThankYou Rewards and Chase Ultimate Rewards, so it's relatively easy to boost your balance. Not only that, but both Amex and Citi offer occasional transfer bonuses, meaning you'll need even fewer points than normal to book awards.

Two major caveats, though. First, you’ll only be able to use these miles to book saver-level awards on Delta, so expect extremely limited availability. Second, you will typically pay more taxes and surcharges on these tickets than using Delta SkyMiles.

Delta changed the game with its all-suites business class. Closing doors (on the A350s and A330-900neos), up-to-the-minute tech and signature soft amenities all ensure a comfortable and memorable flight on the airline's newest Delta One products.

However, the exorbitant award pricing of many flights with these suites means they’re out of reach for most flyers looking to redeem miles to book them at all but the most inconvenient of times. We can only hope that Delta will begin releasing more saver-level and partner award availability as flyers return to the skies that more travelers can experience the next evolution in business class.