Articles
Ethan Steinberg has been a frequent flier for as long as he can remember. He went from studying abroad in Paris to moving to Shanghai after graduating college, where he covered all things travel in the Asia-Pacific region for TPG.
April 24, 2019
•
7 min read 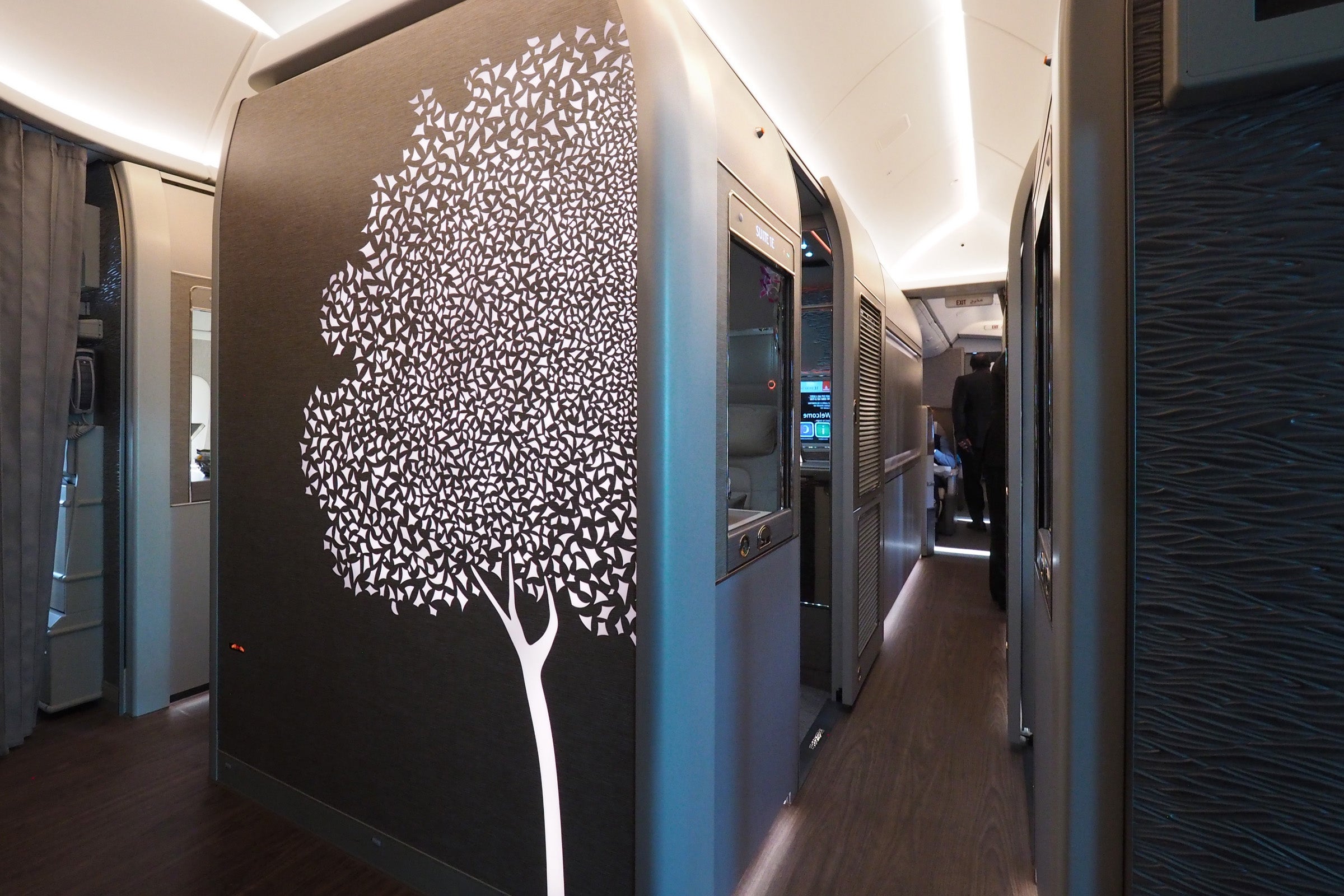 Emirates first class has always been a head-turning product, but the airline upped its game again last year when it unveiled a completely redesigned first class suite on select 777-300ER aircraft. This new seat improves just about every element of the passenger experience, with floor to ceiling doors for complete privacy.

The seat itself offers an unparalleled amount of technological control, from lighting and temperature options to the virtual windows shown below that give the middle seats the best view in the house.

While TPG was able to try out the new product not too long after it launched, this new seat is currently only available on a select number of newly-delivered 777-300ER aircraft. Emirates has 157 777s in its fleet (including 12 freighters and 10 777-200s), so it's safe to say that this new and improved experience is not the norm on an Emirates flight. Still, the carrier has continued to take delivery of new aircraft featuring these seats and will begin retrofitting its existing 777s at some point to feature them as well.

Today we'll take a look at what routes you can expect to find these seats on, and how to go about booking them using points and miles.

Where to Find the New 777 Suites

At the time of writing, Emirates has nine aircraft in its fleet featuring the new seats. An easy tell, especially if you're digging through the fleet details online, is to look for 777 aircraft that only have six seats in first class as opposed to eight. Since Emirates doesn't publish a comprehensive list of which routes have the new product, the easiest thing to do is find the planes that have it and follow their movement.

Here are the current tail numbers of Emirates' aircraft with the new suites:

Note that some of these routes below still alternate between the new and old configuration, and some have multiple daily frequencies from Dubai (DXB) with only one flight typically getting the new product. My suggestion: double-check ExpertFlyer to make sure you're seeing the six-seat layout.

Here are the routes that typically feature the new suites consistently (though again, nothing is guaranteed), including three new additions:

That being said, there are many other routes that have received (or are scheduled to get) the new suites on more than a one-off basis. For example, the carrier's daily nonstop flights (EK211/212) to and from Houston (IAH) are slated to be operated by the new 777-300ER through May 21, 2019 before reverting back to the standard A380. Meanwhile, flights EK59/60 to and from Hamburg (HAM) are showing the new suites from May 31 through June 30 before switching back to the older 777-300ER and its eight-seat, first class layout thereafter.

Again, if you're booked in first class on an older 777-300ER on virtually any route in the Emirates' network, you should keep an eye on the seat map to see if you magically switch from an eight-seat cabin to a six-seat one.

Booking Emirates first class awards is much harder than it used to be. Award rates have gone up and most programs now include aggressive fuel surcharges, although you might be able to minimize them with some creative routing. You can also check out this general guide for booking Emirates awards.

In addition, the new first class suites have generally been off-limits for award tickets in advance. After all, with only six first class seats (compared with 14 on the A380), there's much less wiggle room for Emirates to give away a seat or two for "free" using miles. However, the carrier has started releasing last-minute award space within a day or two of departure, like Friday's flight from Brussels to Dubai, which amazingly has two first class award seats at the time of writing:

Just keep in mind that this availability is far from guaranteed. That Friday flight is currently selling four first class seats, so it's not surprising that the carrier is willing to make a couple available for award tickets. On days that are F1 or F2, there are typically no awards to book.

Since most travelers can't wait until the day before their trip to book flights, your best bet is to book another award that works for you and change your ticket should first class award space opens up. Whether you book through JAL or Emirates (see below), you can expect to pay about $25 to change your award.

In order to maximize your time in first class and enjoy all that Emirates has to offer, you'll probably want to book one of the longer routes such as Dubai to Europe or Tokyo (or perhaps to the Maldives starting June 1) to kick off your vacation the right way. Your best bets for booking these routes are either JAL Mileage Bank or Emirates Skywards, and the one-way award costs are shown below:

If you are able to find round-trip award space (highly unlikely, but just for the sake of comparison), JAL is likely your best bet, since a round-trip flight will almost always price at a lower rate than a one-way itinerary. You can use the carrier's online mileage calculator on this page to determine the total distance (and thus the award rate) for your trip.

Unfortunately, you can't book most of these flights with Alaska Mileage Plan, since the program's routing rules only allow award tickets between certain regions on Emirates.

The rollout of Emirates' new 777 first class product has been relatively slow, and for the moment, these planes are mostly being used on short- to medium-haul flights. We'll continue to update this guide as Emirates takes delivery of more aircraft and expands the routes on which it offers its newest suites, so make sure to check back if you have a specific trip in mind.