Flying in style: The best programs for booking Emirates awards 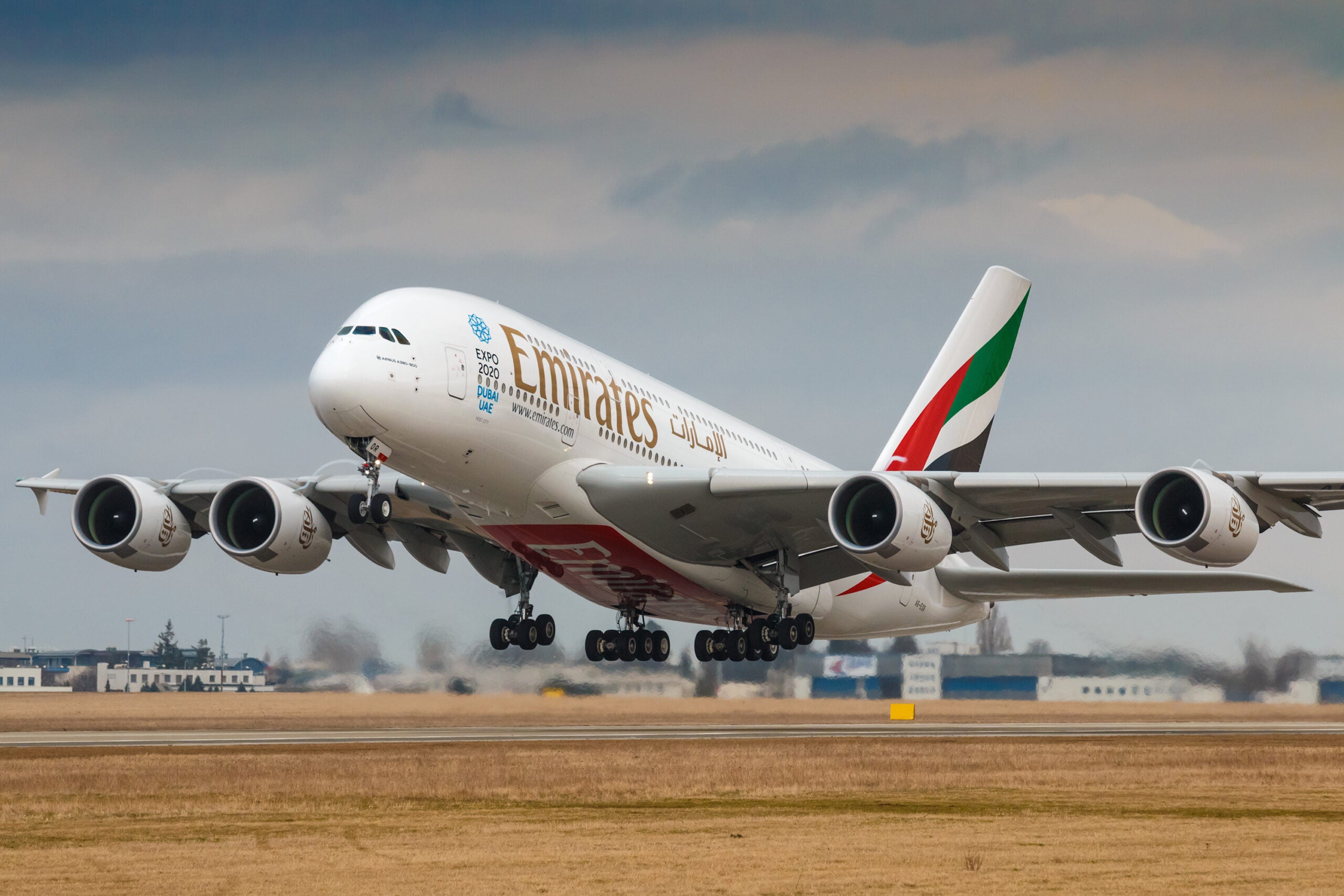 Emirates is among the most sought-after carriers when it comes to award flights — and specifically premium-cabin redemptions. Thanks to great products like the fully enclosed suites available on a handful of 777-300ERs and unique amenities such as the A380's onboard showers and bars, many points and miles enthusiasts make it a priority to redeem their hard-earned rewards with the Dubai-based carrier.

While you can no longer book Emirates awards with Alaska miles, there still are several other options for transferring points and locking in these redemptions. It's also easy to boost your Emirates Skywards miles balance directly with a cobranded Emirates card.

So, buckle up and let's get to it. Here are the best ways to book Emirates awards.

While Emirates has a reputation for gold-studded opulence, not every seat in their fleet is created equal. It might even surprise you to learn that Emirates really drops the ball with a few of their business class configurations. Many 777s feature either angle-flat seats or a 2-3-2 layout with middle seats in international business class. The horror! This post will include information on awards in every class of travel, but due to Emirates’ renowned premium-cabin service, we’ll focus on first-class redemptions.

Although Emirates is in the process of rolling out a premium economy product, it will be a while until we're able to book it — using miles or cash. Until more of Emirates’ aircraft feature premium economy, the airline will be offering the seats as a complimentary upgrade for Emirates Skywards elites and full-fare economy customers.

One of the main highlights of the A380 is Emirates' world-famous in-flight shower. You can fly this product on more than 30 routes, including Dubai (DXB) to New York-JFK and Los Angeles (LAX) and a fifth-freedom route between Sydney (SYD) to Christchurch (CHC). There are 14 fully enclosed suites in the first-class cabin. Each one includes a mini-bar, a huge screen for enjoying the (very comprehensive) in-flight entertainment, and even a pop-up makeup mirror.

The first-class cabin on most Emirates 777-300ERs is slightly smaller than that of the A380, with just eight closed suites. While the configuration is different, the suites themselves are very similar and you can expect comparable service on board. You can fly the 777-300ER on various international routes and even fifth-freedom flights like New York-JFK to Milan (MXP) and Newark (EWR) to Athens (ATH).

However, if you’re lucky, you’ll catch a ride on a 777 with the carrier’s newer first-class cabin, which features just six suites in a 1-1-1 configuration and extras like virtual windows for the seats in the middle of the cabin. It’s currently available on flights from Dubai to just a handful of destinations in the Middle East, Europe and Asia.

That’s not to say you couldn’t use miles (and the strategies discussed below) to book business or economy awards on Emirates. But first-class awards will often get you the most value for your points — and obviously the best onboard experience.

For more information, see the following flight reviews and posts:

Emirates was historically overlooked was because the airline tacked on massive fuel surcharges to premium cabin awards, especially those departing from the U.S. A one-way Emirates first class award from JFK to Dubai (DXB) used to come with over $800 in taxes, but in a surprising move, Emirates massively reduced fuel surcharges on all of its award tickets last year.

That same ticket now only carries a $150 "YQ" (the industry notation for fuel surcharges) and just $162 in total taxes. That's a reduction of over 80%, and given how easy it is to earn Emirates miles, it makes Skywards a much more compelling booking option. This is especially good news considering that Skywards will soon be the only way to book first-class awards.

This change is also significant because it means you can book Emirates first class with points earned on some of the most popular travel rewards cards, including the Chase Sapphire Preferred Card and The Platinum Card® from American Express.

Alternatively, you can quickly rack up Skywards miles with one of Emirates' U.S. credit cards. Barclays' Emirates Skywards cards offer up to 60,000 bonus Skywards Miles after meeting minimum spend requirements — worth $720 according to TPG valuations — and numerous unique perks like instant elite status for a year, with the ability to hold on to it after hitting a certain spending threshold. The cards also unlock access to Emirates Business Class lounges.

With this in mind, let's take a look at some of the best awards you can book directly with Emirates. Emirates' fifth-freedom flight from New York to Milan (MXP) is a popular option, as the Middle Eastern carrier offers a level of service miles above anything else you'll find on that route. You can book a one-way first-class award for just 85,000 miles and $60 in taxes, a steal for a flight that normally sells for $7,500 or more.

Of course, the eight-hour overnight flight to Europe goes by all too fast, and it might not leave you enough time to eat, shower, and enjoy the onboard bar. If you're looking for a longer flight, you can fly from JFK to Dubai for 136,250 miles and $181 in taxes. Emirates uses a distance-based award chart, meaning that flights from the central U.S. or West Coast will be slightly more expensive.

Here's Emirates' full award chart for flights from the East Coast to Dubai (prices are one-way):

Meanwhile, here's the award chart for when you're departing from the central U.S. or West Coast:

If you can earn JAL miles, the Japan Airlines Mileage Bank program can offer a compelling value proposition. This is especially true now that Emirates has slashed fuel surcharges across the board.

Before we dive into specific redemptions, it's necessary to mention that JAL miles are incredibly difficult to earn. Short of crediting paid Oneworld flights to your JAL Mileage Bank account, your only option is to transfer points from Marriott. JAL follows the same 3:1 transfer ratio as most other Marriott partners. You'll also get a 5,000-mile bonus for every 60,000 Marriott points transferred.

Related: When does it make sense to transfer Marriott points to airlines?

Marriott points are relatively easy to earn, either by staying at Marriott hotels or signing up for one of Marriott's many cobranded credit cards. For instance, the Marriott Bonvoy Brilliant® American Express® Card is currently offering a welcome offer of 95,000 Marriott Bonvoy bonus points after you use your new card to make $5,000 in eligible purchases within the first three months of card membership.

JAL uses distance-based award charts and charges you based on the total distance of all your segments. Here's the first-class award chart (no longer applicable beginning Sept. 1, 2021):

Meanwhile, the flight from JFK to Dubai covers just under 7,000 miles, meaning you could book a first-class award for only 120,000 JAL miles. This would require you to transfer about 300,000 Marriott points, making it less attractive. The shorter JFK-Milan route would only cost 65,000 JAL miles or 165,000 Marriott points when you account for the transfer bonus.

Australian flag carrier Qantas is an interesting option for booking Emirates awards. Now that Skywards partners with all the transferable points currencies, it isn't quite as compelling (not that it was ever a shining star), but if you already have miles with Qantas from flying with Oneworld airlines, this may be worth considering.

Qantas also has a distance-based award chart, though unfortunately, it was slightly devalued in September 2020. Here’s the chart for one-way partner redemptions:

Putting those redemption rates in perspective, though, it’s often cheaper to book awards directly through Emirates if you have any other transferable points in your wallet.

These various programs and transfer options are a lot to decipher. To make things easier, here’s a chart comparing round-trip redemption rates across all programs for flights between New York-JFK and Milan, one of Emirates’ fifth freedom routes. Note that taxes and fees should be roughly comparable between programs, or at least close enough that they wouldn't' sway you to book with one airline over the other.

And here’s a chart comparing round-trip redemption rates for flights between New York-JFK and Dubai:

Although Emirates recently lost a major partner, there still are various ways to redeem your points and miles for award flights on the carrier. The best option for you ultimately depends on your personal situation.

Often, when airlines make changes to their frequent flyer programs, it's bad news. However, Emirates' decision to massively reduce fuel surcharges on nearly all award tickets is one of the best things they could have possibly done. This move, combined with how easy it is to transfer points to Emirates, makes Skywards a much more compelling choice for those looking to book an Emirates award. Meanwhile, Qantas' latest award chart changes were mostly negative.

One thing is for sure: if you really have your heart set on a once-in-a-lifetime trip in the Jennifer Aniston cabin, you might just have to pay up to make it happen. Soon, the only way to book Emirates first-class awards will be directly through Skywards.