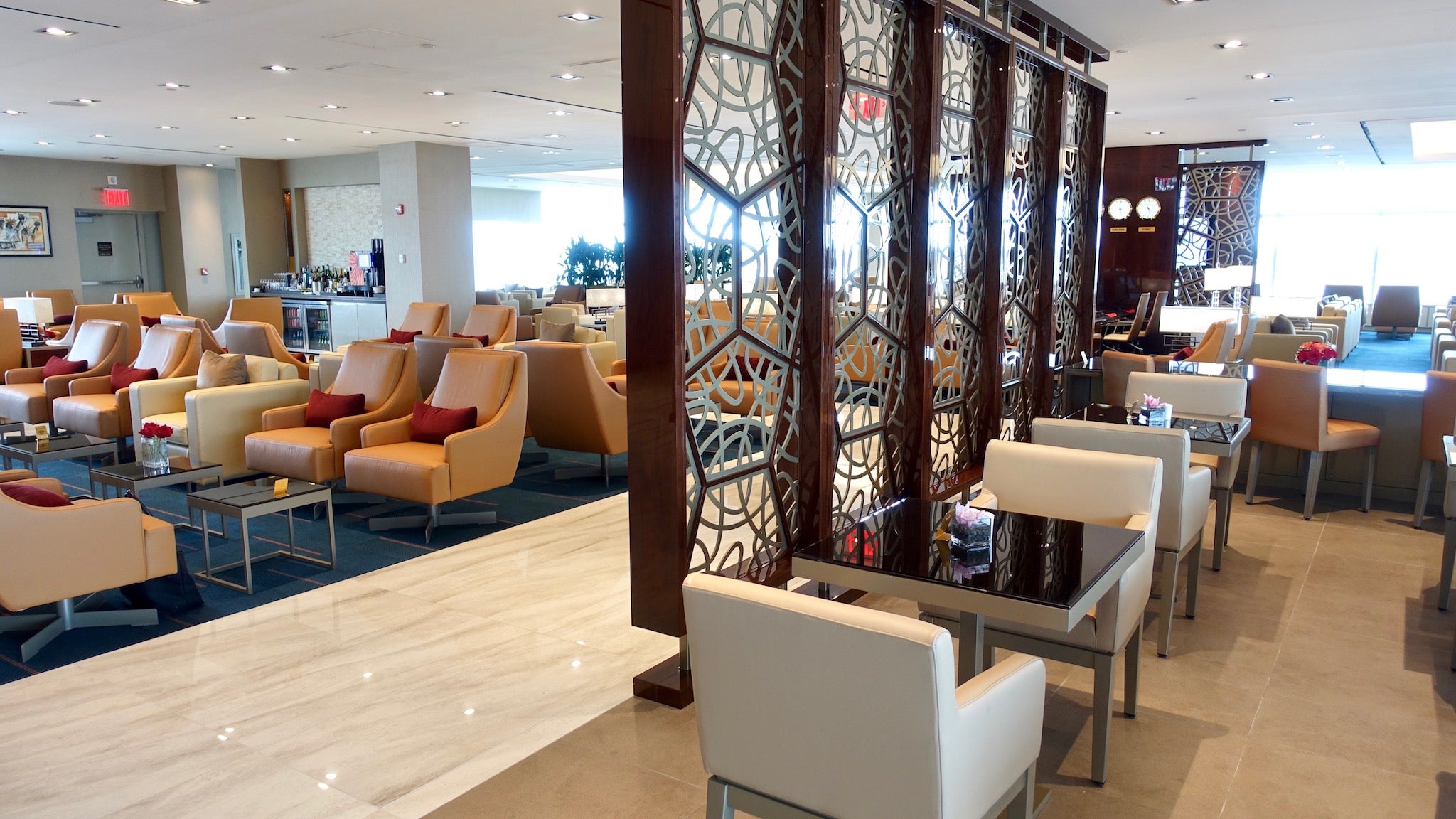 After being closed for nearly a year, Emirates has reopened the doors to its business and first-class lounge at New York’s JFK Airport this week with a completely new look. Given how spectacular fellow Emirati carrier Etihad's lounge at JFK is, we couldn't wait to see how Emirates' would measure up.

The lounge is located in the same space as its former version in Terminal 4, where Emirates’ three daily flights to its hub in Dubai (DXB) and one daily fifth freedom flight to Milan (MXP) depart from, above gate A5.

The reimagined JFK space sports Emirates' latest lounge design and looks practically identical to the recently updated lounge in Singapore (SIN) and the one at Los Angeles (LAX). While it doesn't boast the palatial fountains or soaring ceilings you'll find in Emirates’ flagship first-class lounge in Dubai (DXB), the aesthetic is elegant and inviting.

At around 13,000 square feet, this is carrier's largest lounge in the US. It features seating for up to 216 people, which should be ample considering that Emirates' A380s have 90 premium-cabin seats each and there are only two A380 flights that depart at similar times.

The lounge has a fairly open layout, and like Emirates' other global lounges, doesn't have a separate section for first-class passengers. Although comfortable, there isn't much variety in terms of the types of seating offered.

There aren't any loungers, but there are seats with footrests along the length of the lounge facing the windows. The windows offer sweeping views of the two runways at the east end of JFK (4L/22R and 4R/22L) so these seats aren't just good for resting, but also perfect for AvGeeks looking to do some plane spotting.

One of the most important features of a lounge nowadays is the availability of power outlets — United's new Polaris lounge at Newark (EWR) has 570 of them! Unfortunately though, it seems like Emirates largely missed the memo.

All of the side tables in the main seating area have built in power outlets (both US and UAE) and USB ports, which is fantastic, but there aren't actually that many of these tables when considering how many seats there are. And there isn't a single outlet in the dining area (more on that soon), either.

Although no passenger ever goes hungry on board an Emirates flight, dining is a definitely a focal point of the lounge. Unlike many international business and first-class lounges, including Etihad's lounge at JFK, there isn't à la carte dining — but at least the buffet is terrific.

If you've visited an Emirates lounge before, you might be familiar with the infamous domed food displays, like what you'd find at the carrier's LAX lounge. Well, those have gone away with the new design — cold dishes are now in more conventional cases.

All of Emirates' lounges in the US are now catered by the same company and feature the same menus, which rotate on the first of every month. In July, the evening hot food options ranged from a tagine chicken with vegetable couscous, to pan seared salmon on vegetable risotto to peppered beef fillets with potatoes.

Other hot dishes included roasted lamb with Indian spices, ravioli and a creamy mushroom soup. It goes without saying that Emirates tries really hard to give travelers plenty of options and to cater to those with dietary restrictions, including vegetarianism.

Last, but definitely not least, were the desserts...

All of the food was fresh and incredibly tasty. And depending how you plate your food, you might forget that it came from a buffet.

Unlike the in-flight bars aboard Emirates' A380s, the ones in the lounge are self-serve.

There's one in the dining area...

... and another in the main seating area.

They're stocked with a solid selection of beers, wines and spirits, but you'll need to wait until you're on your flight if you want a glass of Dom Perignon — on the ground, you'll have Veuve Clicquot — still a nice offering.

In the center of the lounge is a business center with four computers and a printer. And perhaps the best feature of the lounge is that guests flying out of gate A6 can board their aircraft directly from the lounge, completely bypassing the herd of passengers at the boarding gate one floor below.

Immediately to the right of the reception area is a hallway that leads to the showers and restrooms. Unlike the original lounge, there are also separate male and female prayer rooms now.

There are three single shower suites — one of which is accessible for disabled passengers — that are complete with a sink and toilet. They aren't especially glamorous, but they'll do the trick. First-class passengers will probably want to wait until they're on board to take a shower, though.

The primary restrooms are more nicely appointed than the shower rooms, and they're very well lit thanks to their large frosted windows.

As is the case with the rest of Emirates' lounges around the world, access is fairly restricted. It's currently only accessible to Emirates business- and first-class passengers, and Gold and Platinum Skywards elite members, who can bring in guests as well (Golds get to bring one guest, while Platinums can bring one adult and two children under 17). Day passes are available for $100 for adults and $50 for children 12 and under, but you can only purchase one if you're traveling with the carrier.

Although the new lounge opened a couple months behind schedule, the wait was worth it. The new space is a drastic improvement over its predecessor. As with its onboard offerings, Emirates does a good job of maintaining a consistent look across its network of lounges. Overall, the space is very nice and feels luxurious, but it's still less swanky than the Etihad lounge lounge that lies just a few steps away. Emirates' lounge is significantly larger than the 7,000 square-foot Etihad lounge, but it also serves more passengers. This is no doubt a great international business-class lounge, but it may leave first-class passengers wanting more.

All images by Benji Stawski / The Points Guy.