How I Became an AvGeek in a Week: Learning to Recognize Airplanes at DCA 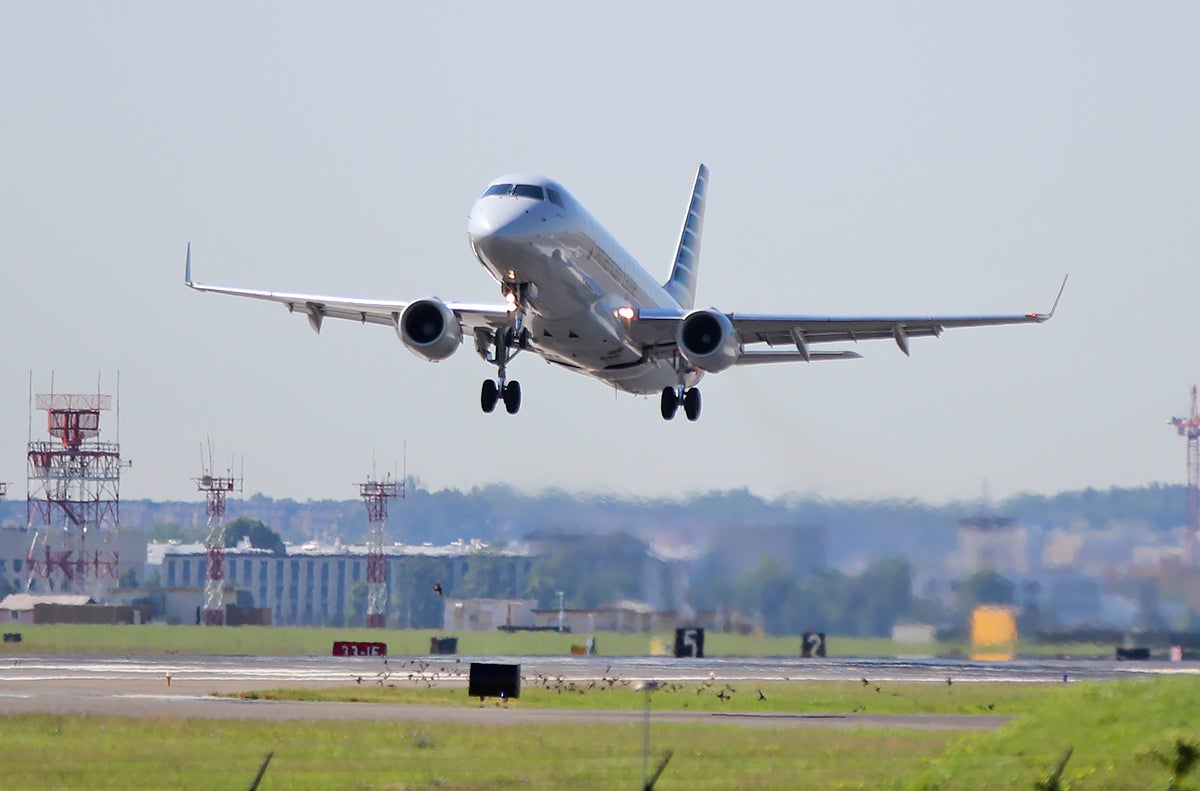 After two days of plane spotting at West Coast mega-hubs SFO and LAX, I had a modest understanding of a few spotters' secrets. I knew, for example, that a single exit door was the difference between a 777-200 and 777-300 and that an A350's cockpit windows look like a bandit mask. I had learned to distinguish the largest Boeings from the largest Airbuses, seen up close the enormous A380, watched my fair share of 747s come and go. In the first and second episode of the intern project I had embarked on — becoming an AvGeek in a week starting from scratch — I had built some decent knowledge of the big jets.

But the widebodies, the large twin-aisle airplanes that cross oceans, are by no means a majority of traffic in the US, or anywhere else. For sheer numbers, the skies belong to the small jets, the 50- to 150-seaters that take care of most people's run of the mill flying. And I knew nothing about those — all the airplane knowledge I had amassed in two days only applied to the largest craft in the sky.

That was why, on the third day of my education as plane spotter, I found myself on the banks of the Potomac River, in view of the runways at Washington, DC's Ronald Reagan National Airport (DCA). My Lyft pulled into the parking lot at Gravelly Point Park at around 7am on a sunny Sunday morning, right as traffic was beginning to pick up on the nearby George Washington Memorial Parkway. Thankfully Gravelly Point Park was the picture of calm. As I set up my equipment near the park's southern edge a family arrived for their own morning of spotting planes. But why had any of us decided to do it here?

On paper DCA is hardly a plane-spotting destination. It's too small to spot big jets — though just right for spotting Capitol Hill bigwigs — and completely lacks the diversity of aircraft that you might find at hubs like nearby Dulles. And the largest plane found at DCA, a United 757-300, only ever flies two routes.

Instead, DCA is swarming with smaller jets like the Boeing 737 and A320. These popular city-hoppers are the workhorses of America's domestic air fleet, moving more passengers than any others. If you've ever flown on a plane, it was likely aboard of them. If you've ever seen a plane, chances are it was one of them. And if you've ever spotted planes, well, almost everything you ever see is one of them.

But with plane spotting, what you see is only half the equation, because where you see it can make all the difference. For DCA, that where is Gravelly Point.

Gravelly Point park sits at the far end of Runway 19, DCA's longest and often busiest. From the park you can see a steady stream of arrivals reaching the end of the nerve-wracking "River Visual" approach, which snakes along the Potomac and must be flown carefully, and manually, to avoid the prohibited airspace over the close-by White House.

When I was there, planes were taking off over Gravelly Point, not landing, as the direction the runway is used changes with the wind. The reason Gravelly Point should be included in any true AvGeek's plane spotting vacation is how close you are to the action, either with takeoffs or landings. Soon after I arrived, a parade of jets began soaring over my head. But there was no time to be jet-lagged, I told my exhausted, Pacific-Daylight-Time-thinking self. There were planes to be seen!

Shooting at Gravelly Point really helped me learn how to plane-spot in less than ideal conditions. This is because of the park's unique line-of-sight: I was looking directly at the planes instead of to their side, meaning that the normal giveaways I had been using —number and placement of exit doors as well as the operator's livery — would be useless. For these smaller, short-haul planes I would need an entirely new strategy.

Over the course of my morning at Gravelly Point I found that winglets, fuselage size and nose shape were the most important indicators for front-facing plane spotting. There were mostly five different plane families at DCA:

And with each family came a different set of clues, which I studied in depth with The Points Guy staff members who taught me the essentials of plane recognition.

1. Engines The engines are to the rear of the fuselage, a common trait among regional jets. Looking at this image, I am pretty sure that what I've spotted is a Bombardier CRJ or Embraer ERJ.

2. T-tail The T-tail is further evidence of a regional jet, although from a distance this could also be an MD-80 or Boeing 717, neither of which are regional jets but still feature a similar engine/tail design.

3. Winglets Outward-angled winglets at the end of the wing knock the Embraer ERJ, MD-80 and Boeing 717 out of contention, as none of those feature any type of winglet whatsoever. That leaves the Bombardier CRJ as the only possibility.

1. Engines and T-tail This jet's rear-mounted engines and t-tail mean it's probably a regional jet. And from this angle I can tell that it has far too small a profile to be an MD80 or Boeing 717. But I'll need more clues than that.

2. No winglets There isn't a winglet to be seen, ruling out the Bombardier CRJ once and for all. The Embraer ERJ doesn't feature any winglets (except for the relatively rare 145XR model, which flies only with United, and this one is clearly an American Airlines machine — the livery is obvious.)

3. Nose shape A rather long and steeply angled nose confirms my suspicions that this is an ERJ.

1. Engines The engines are located underneath the wings, meaning that this cannot be a Bombardier CRJ or smaller Embraer ERJ regional jet. They also appear perfectly circular, unlike the Boeing 737's engines which look somewhat squished.

2. Winglets This jet features outward-angled winglets, so it's not likely to be an Airbus, which features the same general shape (more on that later).

3. American Eagle livery Like other regional carriers American Eagle's fleet consists exclusively of Embraer ERJs and E-Jets, and Bombardier CRJs. I know from the engine placement and tail shape that this is not a CRJ or an ERJ; therefore it must be an E-Jet.

1. Engine Placement The engines are mounted under the wings, and they're also rather circular in design, excluding the possibility of this being a Boeing 737. Already I've narrowed the possibilities down to a Bombardier E-Jet or an A320-family craft.

2. Nose Shape It's hard to tell for sure from this angle, but this jet's nose appears to be on the fatter side. This would be a dead giveaway of an Airbus, though I can't call it conclusively just yet.

3. Wingtip Fences The presence of wingtip fences are definitive proof that I'm looking at an Airbus. These angular wing extensions are found across the Airbus family and on almost no other jet in the skies today. Even so, there are a handful of Airbuses that employ a different design. The new A350 features raked winglets, and some A320s feature "sharklets" that are similar in design to other winglets (at least to my untrained eye).

1. Engine The non-circular engine intake is enough for me to be sure that I'm looking at a Boeing 737 — it's the only commonly seen plane that employs such a design.

2. Split-Scimitar winglets And in case I needed another sign that this was indeed a 737, Boeing's split-scimitar winglets, a relatively new winglet type found only on the 737 Next Generation, would confirm it. They're also found on the new 737 MAX, but I needed not worry about those: at the time of my plane-spotting journey this summer, there were none yet flying in the United States.

As you can see and I as quickly learned, there's a whole lot more to plane spotting than looking up at the sky in wonderment (though that's fun, too!). Getting the hang of this hobby takes some real time and dedication, not to mention a stubborn willingness to learn the tiny differences between one craft and the next. And after a morning at Gravelly Point Park, I was confident that I had made strides towards learning them. I would still need some schooling from the diehards at the TPG office, but halfway through my adventure, I could say that I wasn't an absolute beginner anymore. And I was ready for the next stop on my AvGeek journey — not just any airport, but Saint Maarten, the number one bucket list item for people who have been bitten by this particular bug. Not bad, I thought, for an intern project.