Articles
Emily McNutt is The Points Guy's Global News Editor and is based in London.
Follow
Oct. 04, 2017
•
11 min read 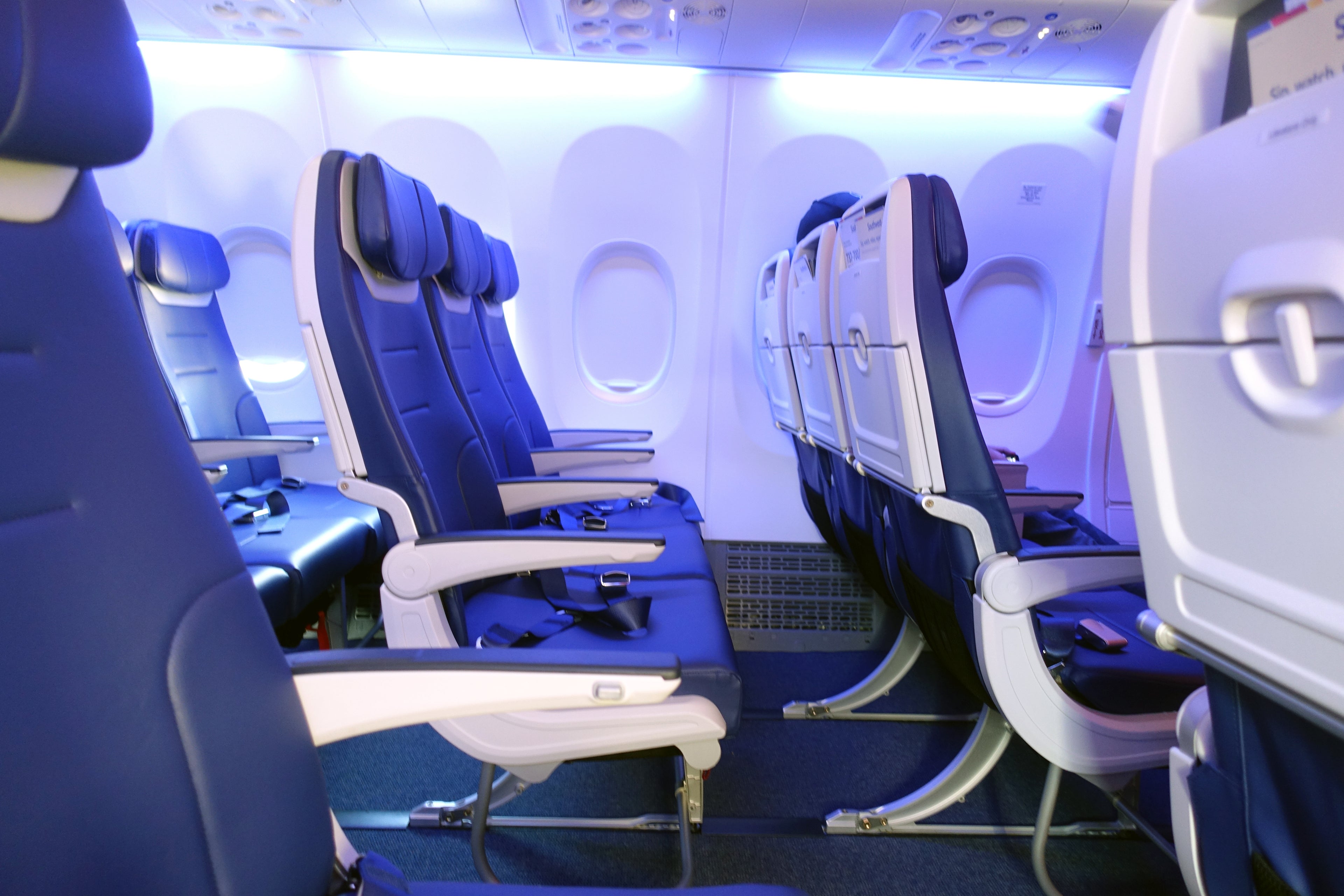 Southwest made history Sunday, welcoming the Boeing 737 MAX 8 to its fleet. While the day didn't go exactly as planned, as the aircraft ended up being swapped in for an older 737, the first flight went off without a hitch. The 60-minute hop between Dallas Love Field (DAL) and Houston Hobby (HOU) was a great introduction to the MAX and the comfortable product it offers passengers.

Prior to the flight, I'd heard about the new benefits of the MAX — a quieter and more fuel-efficient ride — but I was excited to see for myself what all the talk was about. I ended up booking three flights, which were all part of the Texas Triangle, the original route Southwest operated when it launched service in 1971 — Dallas Love Field (DAL) to Houston Hobby (HOU); HOU to San Antonio (SAT); and SAT back to DAL. Albeit short, each of the three flights would offer me the opportunity to experience it from wheels up to touchdown three separate times.

This review, including the booking section, will focus just on Southwest Flight 1, prior to the aircraft being swapped out of service due to mechanical issues. For more coverage of the first Southwest 737 MAX 8 flight, check out the following posts:

When Southwest first announced it was going to make the inaugural 737 MAX 8 service along the nostalgic Texas Triangle route, AvGeeks were quick to pounce on tickets and before long, there was no availability on flight WN1. Unfortunately, I didn't act quickly enough to snag one of those tickets, but I did manage to get WN2 and WN3 — Houston to San Antonio and SAT to Dallas Love Field — to fly the rest of the triangle.

Luckily, less than a week before Oct. 1, TPG reader Colin S. wrote in to let us know he had a ticket on WN1 that he wasn't going to use, so we coordinated when he would be refunding the ticket so we could pounce on the coveted open seat — and it worked. Thanks, Colin!

When the seat became available, there were no more Wanna Get Away or Business Select fares, so I booked the Anytime fare class. The ticket itself cost me $225, but because I wanted to make sure I got an early boarding position for a window seat, I also purchased the EarlyBird ticket option for an additional $15. In all, the ticket cost me $240.

Because I was booking directly through Southwest, I paid for the ticket with my Platinum Card from American Express so I'd earn 5x points on the airfare purchase. The $240 ticket netted me a total of 1,200 Membership Rewards points, worth nearly $23 based on TPG's most recent valuations. The short flight also yielded me a total of 1,961 Rapid Rewards points, which are worth around $29.

Because WN1 was the inaugural flight for the 737 MAX 8, this wasn't the typical gate situation. You can read more about what the experience was like in this post, but to sum up, it basically featured a photo booth, Southwest-branded trinkets and a brief introduction to the MAX by Southwest CEO Gary Kelly.

Because I'd purchased EarlyBird, Southwest automatically checked me in for a preferred boarding position. I ended up with B10, which wasn't too bad. A Southwest employee found me in line when I was waiting to board and asked if I wanted a commemorative boarding pass, which indicated that this was the 737 MAX 8 inaugural flight.

Because a majority of the passengers on this flight were Southwest employees, frequent flyers or AvGeeks who'd flown with the carrier before, the boarding process was straightforward and passengers didn't get overwhelmed in the shuffle of the open boarding process. Once we were on board, flight attendants gave away 25,000 Rapid Rewards points to two passengers.

One surprising announcement during the boarding process indicated that only 143 of the 175 seats were filled — I was confused by this, especially given how desirable a flight this was. Perhaps the company was expecting more employees to attend so it didn't open up more revenue seats, but I was a little bummed that more AvGeeks weren't able to get a spot on the plane when there were seats available.

The cabin on the 737 MAX 8 was aesthetically pleasing; this was evident as soon as I stepped on board and was bathed in fluorescent blue-and-pink mood lighting and boarding music.

Both the lighting and music are features that Southwest never offered on its older 737 variants. I found the mood lighting to be nice and the music to be calm and welcoming. As flight attendants were giving away the Rapid Rewards points before takeoff, the lights switched to a reddish-pink color, with green over the emergency exits.

The cabin itself was pretty standard in size for a 737. Like Southwest's newer 737-800s, there were 175 seats with a single central aisle, arranged in a 3-3 configuration.

Each of the seats had a generous 32 inches of pitch. Southwest boasts that it has the widest seats of any 737 variant, at 17.6 inches.

I found the seats to be spacious and comfortable. Because they were "pre-reclined," meaning they were shaped more like a "C" than an "L," they were comfortable without me even having to recline. And because each one had 32 inches of pitch, seats were pretty spacious as far as legroom was concerned — I'm 5' 7", and found it to be comfortable.

My only complaint with the seating on the 737 MAX 8 was the much narrower than usual armrest — having the widest seats on a 737 apparently came at a price and I often found my elbow slipping off it and into the empty seat next to me. I can imagine that'll happen quite often and would be irritating for passengers on a full flight.

My window seat, 20A, was just a few rows behind the exit row.

Gary Kelly took a seat in the rear of the cabin, two rows behind me by the aisle. Like everyone else, Kelly was very enthusiastic about the flight.

In the air, Kelly went to the front galley to make an announcement on the PA system, speaking highly of the 737 MAX and thanking everyone — both passengers and employees — for our excitement and for being present for the first flight. He then gave away an Apple Watch.

I was really looking forward to trying out the 737 MAX 8, especially because it'd been billed as a very quiet product — it proved to be true right away, being quite silent during taxiing and takeoff. The whisper-decibel ride lasted the entire flight.

Each of the seats had a tray table that extended. I didn't have any issues with legroom, even when when my tray was down and pulled out all the way.

Overall, the cabin and the passenger experience was much more comfortable than on older 737 variants. With spacious seats, mood lighting and new boarding music, Southwest gives passengers something to look forward to with this latest addition to its fleet.

Because this flight was just an hour long, there wasn't much in the way of food and beverage service. Before takeoff, flight attendants came around and took orders for the drinks they served once we were in the air. After these were served, the FAs came around again with small bags of pretzels.

Because this and its HOU-SAT and SAT-DAL routes served as the inaugural flights for the MAX, Southwest offered free Wi-Fi for all three legs of the journey — normally, the carrier charges $8 for all-day Wi-Fi service. But when I tested it out on the first route, I found it to be almost nonfunctional, perhaps because so many people were trying to use it at the same time. When I attempted to run a speed test, it simply failed — that's how unbearably slow it was.

As far as in-flight entertainment on the MAX, passengers should expect to fend for themselves. The seat-backs had no built-in IFE systems, though Southwest did offer both Wi-Fi and the option to stream complimentary live TV.

Seats on the MAX didn't have power outlets installed, which is unfortunate: With no IFE screens, passengers are required to use their own devices. But without outlets, they also have to worry about those devices' batteries dying during the flight.

Overall, the 737 MAX 8 with Southwest is a comfortable and welcome product. As the airline continues to expand its routes, the MAX gives it the ability to go farther than previous planes, and, because it's much more fuel-efficient, Southwest will pay less in fuel, hopefully resulting in lower fares for customers. The future of Southwest looks bright, and the 737 MAX 8 is helping to lead the company in the right direction.

Have you flown on Southwest's 737 MAX 8 yet? Tell us about your experience, below.