Articles
Emily McNutt is The Points Guy's Global News Editor and is based in London.
Follow
Oct. 01, 2017
•
5 min read 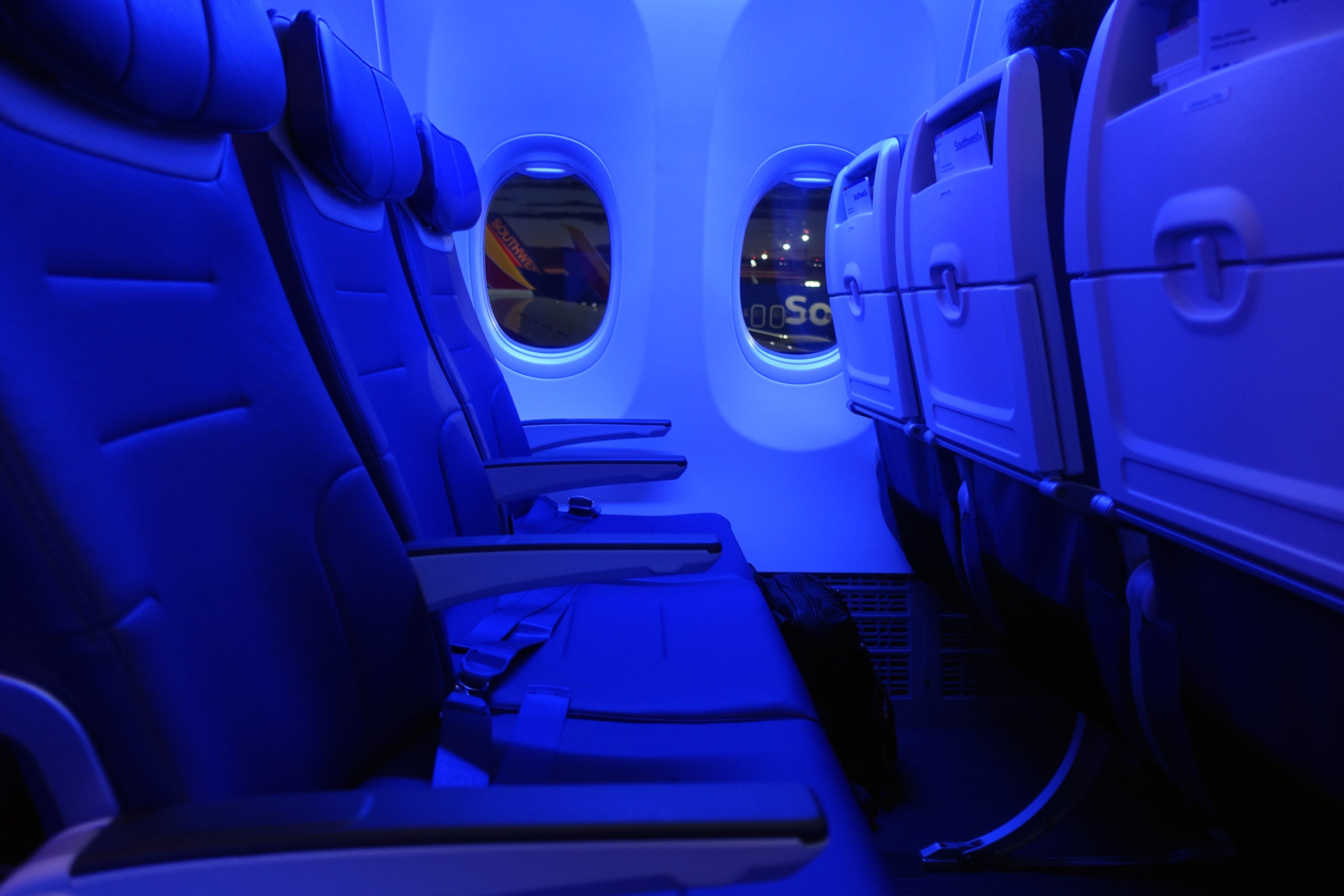 A Look at the First Southwest Revenue Flight of the Boeing 737 MAX 8
This post contains references to products from one or more of our advertisers. We may receive compensation when you click on links to those products. Terms apply to the offers listed on this page. For an explanation of our Advertising Policy, visit this page.

On Sunday I was scheduled to fly on three of the very first Southwest revenue flights utilizing the airline's brand new 737 MAX 8. Unfortunately only one of the flights took place, as a technical issue prevented the plane from departing Houston Hobby (HOU) on its second flight. But before the aircraft (N8707P) cut our journey short (along with its own), WN1 from Dallas Love Field (DAL) to Houston Hobby went off without a hitch, and passengers got an idea just how comfortable the hard product is.

I arrived at the gate for WN1 around 5:15am and, to my surprise, there were already a good number of people sitting at the gate area. You could tell they weren’t on this flight by chance, with many people sporting Boeing or 737 MAX 8 shirts and hats.

At the gate was also a photo booth, complete with a green screen.

Southwest employees encouraged passengers to get their photo taken with the 737 MAX. Options for a backdrop included the cockpit, the fuselage or the engine. All photos could either be printed or emailed, and each was captioned “To the MAX.” Both passengers and Southwest employees lined up for their pictures up until boarding time.

Employees also set up a booth with some Southwest-branded trinkets — luggage tags, sunglasses, a pen and headphones. A gate agent informed passengers that the trinkets weren’t a free-for-all, but instead prizes for giveaways. However, the giveaways never happened and people ended up taking whatever they wanted.

Boarding was set to begin at 6:30am, and there was much excitement around the gate area as the time approached.

There was word that Southwest CEO Gary Kelly would be on the flight, and just about 5 minutes before boarding was set to begin, Kelly made his way to the desk. Kelly welcomed and thanked everyone for being on board the inaugural flight. He gave some facts about the MAX and what it meant for the company — especially how the fuel efficiency of the MAX could take Southwest to new destinations. Of course, someone mentioned Hawaii, a long-awaited announcement from the carrier.

There was certainly plenty of excitement from both the passengers and employees. However, while there was certainly a buzz in the air, there was a feeling there could have been more celebration. I talked to one gentleman who asked where the Champagne was. That being said, the above-and-beyond friendly nature of the gate agents, AvGeeks and employees was enough to keep up the level of excitement — even at 6:30am.

Whereas I normally use my phone to board, this process turned out to be a bit different. A Southwest employee came up to me and gave me a paper boarding pass to remember the flight by. It had "737 MAX 8 inaugural flight" written in the bottom left corner.

Gary Kelly stood at the forward of the cabin and personally greeted every passenger as they entered the plane — a handshake, the opportunity to take a selfie and discuss the new aircraft.

That hospitality from Kelly didn’t end at all during the flight. Kelly made his presence known, welcoming everyone on board when we reached a cruising altitude. He’s a very likable figure, having full conversations with passengers and posing for countless pictures. Kelly took a seat in row 22 — an aisle seat.

Just before takeoff, flight attendants randomly drew two winners who walked away with 25,000 Rapid Rewards points each. Then, while we were in the air, Kelly made his way to the front of the cabin and gave away an Apple Watch.

The flight itself was noticeably different and more pleasant than on the 737 MAX 8’s predecessors. Specifically, I noticed how quiet the ride was — it’s much more enjoyable than on other aircraft.

I’ll go into more detail on the flight experience and cabin itself in a separate post, but overall, it was a great experience, and will be much more comfortable for new routes as Southwest (hopefully) expands to longer-haul routes. *cough, Hawaii, cough*

Stay tuned for a full review of the experience, as well as a post that goes more into the hard product itself.