Business Suits Me: Emirates (777-300ER) in Biz From Singapore to Accra via Dubai 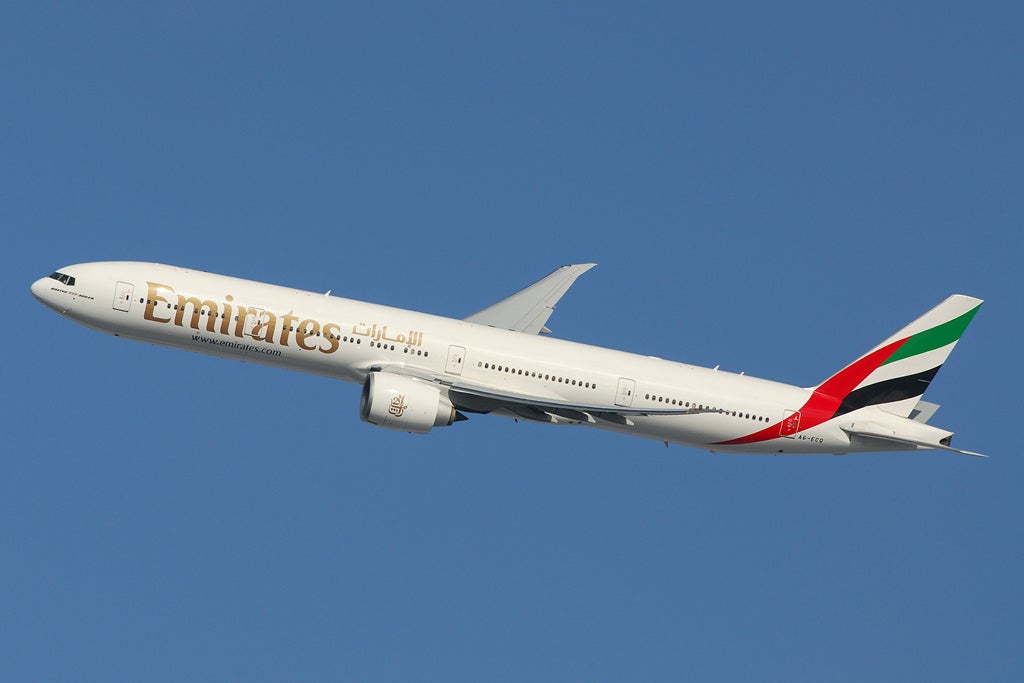 Since joining The Points Guy team in February, I've been thrown headfirst into the exciting world of points, miles, AvGeekery and travel. Naturally, when the opportunity to join a TPG-hosted PeaceJam conference in Accra, Ghana, presented itself, I jumped at it.

I already knew that my trip to Accra was going to be memorable, since PeaceJam works to provide educational opportunities and to support learning initiatives for young Ghanaians, but as an added bonus I also got to partake in the Emirates business-class experience — something that I'd been hearing about since I started at TPG — for the first time.

Before I knew that I'd be going to PeaceJam in Accra, I'd booked a trip to visit family in Singapore just before the PeaceJam conference, so I'd be coming from Singapore (SIN) to meet the team in Accra. Emirates proved to be the most convenient option, as it operated four nonstop flights between SIN and Dubai (DXB) daily, as well as a one-stop option via Colombo, Sri Lanka (CMB).

Fortunately, the latter option was available with miles, so it was settled — I'd be flying from Singapore (SIN) to Colombo (CMB) to Dubai (DXB) to Accra (ACC), all in business class on board Emirates' Boeing 777-300ER. Here's what my first experience with the carrier was like, focusing on the Dubai to Accra portion of the journey.

Like I mentioned above, the SIN-CMB-DXB-ACC flight was available with miles through the Skywards program. This particular flight cost a total of 103,750 miles and about $423 in taxes and fees. Since TPG values Emirates Skywards miles at 1.2 cents apiece, we spent about $1,245 worth of Skywards points, which were left over in TPG's account from a previous redemption. Considering the cash prices of these tickets have consistently hovered around $6,000 one-way, we saved a huge amount of money using Skywards points.

If we had booked an Emirates flight that originated or ended in the US, our first place to search for award availability would have been Alaska Airlines. But Alaska doesn't allow award bookings for itineraries that both start and end outside the US. Instead, we could have booked through Korean Air's SkyPass program or Japan Airlines' Mileage Bank program, which are two decent options for booking premium-class award tickets on Emirates. However, both programs have family restrictions that would make using them impossible in this case with a non-relative's miles.

I took a 25-minute taxi ride from my hotel in downtown Singapore and arrived at the airport about two hours before my flight was scheduled to depart. Unsurprisingly, it wasn't very crowded, and check-in could not have been easier. I didn’t bother to check-in online, since I had a bag to check. So, I simply showed up at the first- and business-class counters at Changi Airport, went straight to the check-in agent, said goodbye to my bags and went through security. No trouble at all.

Unfortunately, I had a tight connection in Dubai (DXB) which involved a terminal change, so I wouldn't be able to check out Emirates' lounge at its home airport. But, on the bright side, the airline has a nice large lounge in Singapore, at which I spent a good amount of time.

The lounge was spacious and fairly empty, which wasn't all that surprising, given the time of the flight. The passengers who were there had taken up positions around the various TVs to watch Germany crash out of the FIFA World Cup.

The food selection was extensive, with a fully stocked self-serve bar to match. I wanted to sleep as much as possible on this flight, so I stuck to water.

Fast-forward nine hours and past a brief stop in Colombo where we dropped off some passengers and picked up others, and I stood at my gate in a very busy DXB airport waiting to board my nonstop flight to Accra. You had to really weave through the crowds and, as I discovered, Dubai is a silent airport, meaning there were no PA announcements, so you had to stay sharp in terms of timing and where you were headed. I arrived at my gate right as the business-class cabin was boarding.

My 777-300ER featured a three-class configuration, with 354 seats in total — eight first-class suites, 42 business-class seats and 304 in economy. Each first class suite was fully enclosed and is considered by TPG to be one of the best products in the sky — maybe I'll have to try one of those on my next Emirates flight! The economy cabin was arranged in the dreaded 3-4-3 configuration which meant that seats measured a paltry 17-inches wide and offered 32 inches of pitch.

This cabin only had two rows of seats, but it was still fairly dense since Emirates chose a 2-3-2 configuration for business class on this aircraft. Yep, this meant that there was a middle seat — gasp! The nature of the seats meant that if you did find yourself in that middle seat, you would need to climb over one of your neighbors if they had their seats extended all the way (which wasn't all the way flat, either, by the way). The same was true of the window seats as well, which would require you to climb over anyone sleeping in an aisle seat. This configuration didn't offer much privacy, especially for aisle seats. If privacy is what you seek, definitely go for a window seat.

I assumed my position in an aisle seat in the center section — mercifully, no one was seated in the middle seat for this flight. My seat (and all others in business class) measured 20.5 inches wide and offered 60 inches of pitch. Another downside of this product is that the seats don't actually extend to a fully flat position, but rather are angle-flat when fully extended.

The seat was spacious, and the seatback IFE screen was large. There was not, however, all that much storage, especially around the seat. My phone only just fit on the side counter, and the cup holders were shallow. Everything else had to be put away in my bag in the overhead bins.

While the seat didn't provide much storage, it sure was comfortable — I found it to be perfect for lounging as if you were in a recliner in your living room.

The flight was seven hours and 30 minutes, so I definitely had time to catch some shut-eye — I did sleep well even though the seat was an angle-flat design. The provided bedding was great — it wasn't too bulky but it definitely added another dimension of comfort to the seat.

The food and beverage service began as soon as I sat down in my seat — flight attendants swooped in, offering either Laurent-Perrier Brut or orange juice. I opted for the former, naturally.

The meal service is where things started to get really good on this flight, particularly the lunch offering.

Shortly after takeoff, we opened with a breakfast — there was a choice between the "continental breakfast" consisting of juice, fresh fruit, yogurt and a variety of breads, croissants and pastries; or the "express breakfast" which was simply a pastry with tea or coffee. Wanting the full Emirates experience, I chose the continental breakfast and had yogurt, fruit and a sweet roll — all of which was tasty, but not especially exciting or memorable.

Lunch was what really set the service apart, however. The meal consisted of an appetizer and a main course, all of which was served with a salad of moghrabieh (a type of Lebanese cous cous) and feta salad along with bread.

Appetizer choices included mushroom soup, a traditional Arabic mezze and salmon gravlax. I went for the gravlax, which was not too salty and incredibly fresh thanks to the cucumber and lemon — it was amazing!

I ordered the lamb shank, which was also great. The meat fell away as I cut into it (a good sign for any lamb shank), and the accompanying potato gratin was not too heavy.

There were four choices for dessert: chocolate mango tart, passion fruit tart, fresh fruit or a cheese board, all of which were served with a couple of chocolates. I could barely muster enough appetite for dessert at this point, so I went for fresh fruit, which was basic but fresh and juicy.

An amenity kit was notably missing from this flight, but I did appreciate the eye mask and bottle of water in the seatback pocket. The headphones were noise-canceling, and featured some of Emirates' signature bling.

The movie selection was comprehensive, offering a range of recent releases and a host of other Hollywood, Bollywood and Middle Eastern movies. There was definitely no shortage of good entertainment, there was even live sports programming available — in theory I could have watched a World Cup match from the flight, though none were being played while I was flying. I watched one movie ("Blade Runner 2049") before taking a nap.

Although I liked the tablet controller and TV combination, it took a bit of getting used to. Once I did get the hang of it, though, the system was seamless and fast, much better than the traditional remotes you find on most planes.

While the lavatory was fairly typical in terms of the space itself, it featured a his-and-hers Bulgari set, which was certainly a nice touch.

Emirates does offer Wi-Fi on its 777-300ERs, but I didn't even attempt to connect as I was very tired from the redeye flight from Singapore and wanted to maximize my sleeping time.

This was a memorable flight for me. The food was great and the seat comfortable, even though it didn't extend to a fully flat position. The cabin temperature was good and not too dry (I’ve been burned before after sleeping with my mouth wide open!). The only real drawbacks were the lack of privacy on the aisle seats and the sparse storage around the seat. Overall, it's a product I would recommend — I certainly won't hesitate to fly Emirates again.