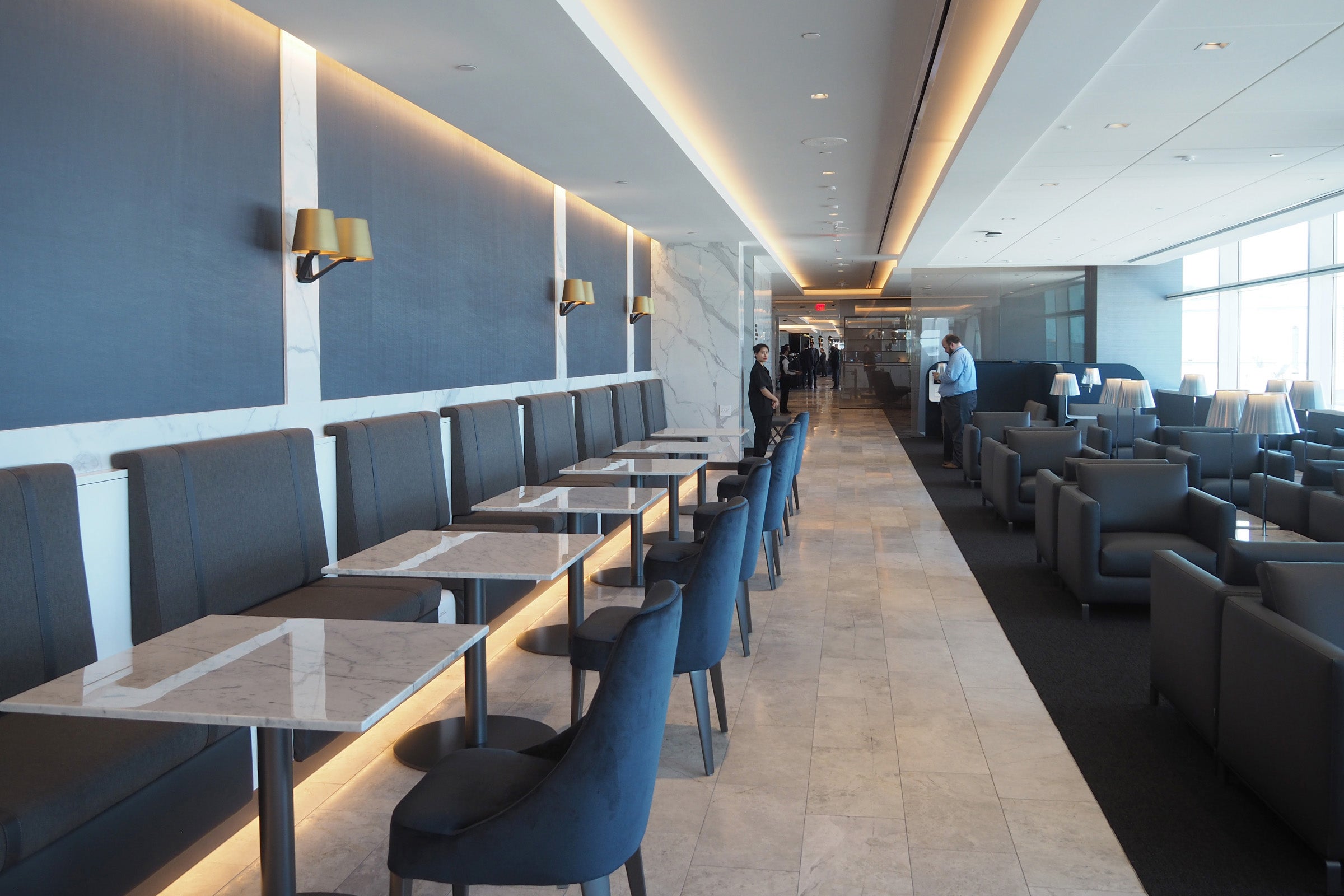 For frequent flyers who love nothing more than the cool, refreshing feel of one of those little blue United pillows, this week didn't seem like it could get any better. But wait, there's more!

On Wednesday, I got to tour United's latest (and second-ever) Polaris Lounge, located near the "G" gates at San Francisco International Airport (SFO). MileagePlus members will get a sneak peek on Friday, but long-haul business and first-class passengers traveling on a Star Alliance carrier will have access beginning on Monday, April 30 (see "Access" at the bottom of this post for more details on who can get in).

The Polaris Lounge is located near the Gucci store, not far from gate G92, so it's a short walk from United's international flights. It's open from 6:30am until 1:00am every day.

Even after United opens all of its planned Polaris Lounges, the SFO location will remain the largest, at a whopping 28,120 square feet — excluding the substantial back-of-house areas, such as kitchens, passageways and more.

According to the airline, there are 19 different types of seating in the lounge. I didn't count, but I'd believe it given how many options there are throughout both floors.

There are 440 seats in total, and those small cube-style seats above are by far my favorite. They're exceptionally wide and remind me of the old Singapore Airlines business-class seats, though they're even larger than that.

And there are even more power outlets and USB charging ports than there are seats — 492 of each, spread between both levels.

And since I'm sure someone will ask... yes, I checked — the books are real.

While you can request a drink from an attendant downstairs, you'll need to head up the escalator for most of the fun stuff.

I followed United CEO Oscar Munoz up the stairs, immediately following the ribbon-cutting.

Elevators are available as well, if that's more your speed.

While the downstairs area is nice, the second level is the real show-stopper.

While it's not quite as large as Emirates' frighteningly huge Dubai hangouts, the SFO Polaris Lounge still feels like it goes on and on and on — it took me nearly three minutes to walk from one end to the other.

There are tables and chairs throughout, both near the dining areas and just in random spots along the halls.

As for the dining areas, there's a dedicated room and then something United's calling "The Studio," which will have a mix of buffet items and sushi when it isn't being used for special events.

The lounge even has a pair of fancy-schmancy binoculars, just like Emirates' new first class suite (although they're ever-so-slightly more useful here).

You can see plenty of planes even without those "field glasses," though. What's better than sipping Champagne as you watch 787s pull in and out of the gates? It's an AvGeek's dream!

Upstairs, you'll find a bank of single restrooms, but most of the R&R amenities are back down the escalator.

Eight shower suites are up for grabs — my favorite is behind the first door on the left, since it's a bit larger than the rest.

Each shower suite has Cowshed products and Saks Fifth Avenue towels. You can also hand over slacks, shirts and other items for pressing while you freshen up.

The relaxation area is located around the corner.

You can help yourself to one of five daybeds, each with its own semi-private room.

There are noise machines to help drown out the ambient sound, along with eye masks and Saks pillows and throw blankets.

My favorite area is back up the escalator, though — the dining room!

Although I haven't had a chance to try it myself, this area reminds me a bit of AA's Flagship First Dining.

Personally I think I like the modern look of that AA space over this one, although both are exceptionally posh for US airlines.

Waiters in the dining room are available to take your order off the a-la-carte menu.

Or you can head to the next room and grab something from the sizable buffet.

There seemed to be a heavy focus on Asian dishes, which makes sense given that many of United's flights (and its partners) are headed to destinations in China, Taiwan and Japan.

The sushi was the only thing that didn't look all that appetizing — apparently it's provided by an outside vendor, so I imagine it was prepared at least a couple hours in advance. There was even some sushi inspired by the Golden State... can you name it? Rhymes with Schmalifornia Roll.

And, of course, you gotta save room for dessert...

While I was bummed that I didn't have any time to try the food, I was even more upset to miss out on the fancy cocktails those Sodexo bartenders were whipping up.

There's plenty to choose from on the booze front, including some liquor and wine options that put United's in-flight Polaris catering to shame.

The Polaris Old Fashioned would've been my first pick.

There are also eight beers on tap, from all around the world.

Seven of them hail from California, paying homage to SFO's backyard.

Nothing beats the look of the Paper Plane, though — how cool is that!

As with the Chicago location, Polaris Lounge access is restricted to passengers traveling in the following cabins:

First-class passengers may also bring a guest, but access is restricted to long-haul intercontinental travel — if you’re flying between the US and Canada, Mexico, Central America or the Caribbean, you won’t have access, unfortunately. Note that United will soon retire first class, but other carriers, such as Lufthansa, will continue to offer first-class service from SFO.

This particular location replaces the former EVA and Singapore Airlines lounges, with hours to accommodate those late-night departures — in the summer, the Polaris Lounge will be open from 6:30am until 1:00am daily. Passengers flying any Star Alliance carrier will have access to the Polaris Lounge when traveling business or first class. Star Alliance Gold customers in economy will have access to the United Club, instead.

You can come in even if you're just arriving on an eligible flight — United will eventually close the separate Arrivals Lounge at SFO, but there will be a procedure in place for passengers coming into SFO to make their way through security and into the lounge even if they don't have a same-day connecting flight.

Even if you aren't a United fan, it's hard not to be impressed by this new lounge. Not only are the amenities top-notch, at 28,000 square feet, this is an absolutely gigantic space.

I'm glad to see United finally step up its Polaris game — the airline has committed to rolling out an average of one new or refurbished plane featuring the new business-class seats every 10 days from now through 2020. Polaris Lounges are rolling out at a much more reasonable rate, too, with Houston (IAH), Newark (EWR) and Los Angeles (LAX) all set to open over the next few months.