An Update on United Polaris Business Class, One Year After Launch 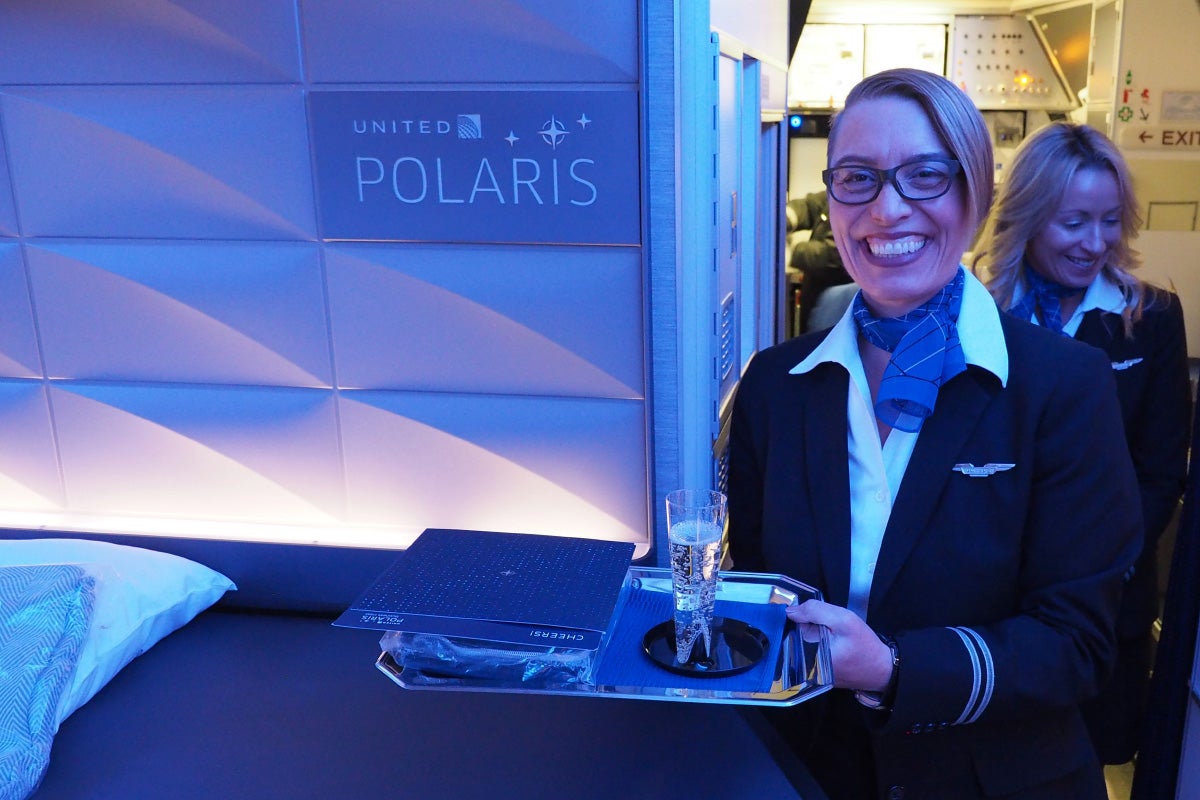 It's been exactly one year since United launched its brand-new business-class product, Polaris. While only the soft product was available on the December 1 launch date, including updated catering and amenities in international business and first class, along with the new Polaris Lounge in Chicago (ORD), the new seat began to roll out a few months later.

That didn't stop United from advertising the complete experience right away — O'Hare was plastered with Polaris ads showing the new seats, and the Polaris branding was present throughout the system. I even saw a Polaris ad as I walked down the jet bridge in Des Moines (DSM), a city that will surely never see a long-haul United flight.

Within weeks, Polaris was everywhere, and nowhere all at the same time. It caused a lot of confusion, frustrating United newcomers and the airline's most loyal elites alike.

Take this television ad, for example:

Naturally, customers who saw that ad or any of the airport marketing would expect a seat like this:

Instead, most ended up flying in United's much older seats, including the ultra-dense 2-4-2 arrangement below — and still do today.

By now, several hundred thousand passengers have had a chance to fly in the new business-class seat — a huge step up from the older models — but with only a small portion of the fleet offering this improved 1-2-1 design, you're still much more likely to end up with a far less desirable "hard" product, albeit with the same service you'd get on the newer planes.

The Polaris "soft" product is fantastic, though — especially the Saks Fifth Avenue bedding. I'm also a big fan of the pajamas, although they're only available on United's longest flights, such as those to Asia. The amenity kits are an improvement, too, though I do prefer Delta's Tumi kits.

In addition to those updated kits, the full Polaris experience promises:

You need all three in order to get the full Polaris experience, and for now, it's incredibly rare for those stars to align. In fact, the only way it'll happen is if you somehow land a long-haul flight departing Chicago (ORD) on one of 14 777-300ERs or a retrofitted 767-300. Sadly, scoring that combo is far easier said than done.

While United clearly has some catching up to do in order to bring its product offering in line with initial marketing, it'll be interesting to see how Delta advertises its new Suite product, which is currently only available on a couple Airbus A350s, and will expand slow beginning over the next few months. Eventually, it'll make its way to many more Delta planes, just as United's new seats will become more commonplace across its own long-haul fleet, but for now both airlines offer their latest business class on a very small number of aircraft. American's experience is even more fragmented.

I've managed to fly in the new seat a handful of times now, but if I didn't know exactly which planes to look out for, it'd be unlikely I'd ever end up in the "real" Polaris. And United doesn't make it easy to tell what you'll get. For example, each day the airline flies both a new 777-300ER and a much older 777-200 — most likely delivered in the last century — between Newark and Tel Aviv.

Here's what you see when searching for a flight between those two premium-heavy markets:

Can you tell which offers the new seats? I can't... until I click the "details" tab to expand, which is only available when searching on United's site directly.

Still, I'd have to know that the 777-300ER is the plane with the better seats — there's no "actually, this one really does have Polaris" indicator on United's site. Both products are branded "United Polaris business." Ugh. Otherwise, the only way you can differentiate the two is by clicking to view the seat map, but even then you'd still need to know what to look out for — in this case, blue seats arranged in a 1-2-1 configuration, rather than yellow seats in 2-2-2.

If you're searching on Google Flights or through an online travel agency, you'll likely see some combination of "777" or "Boeing 777" — even if you knew to look for the -300ER, you often wouldn't see it during a search.

Those are entirely different planes, offering a far different experience both in business class and economy, but there's absolutely no indication through third-party sites. Useless.

Of course, the issue is that with the exception of flights operated only with the 777-300ER, refreshed planes will only be assigned to specific flights a couple days before departure — if United indicates that certain routes may offer the new seat, many customers could end up disappointed.

Currently, just 16 planes have the new Polaris seats, including the 14 777-300ERs United's already added to its fleet, along with one 767-300ER that underwent a retrofit this summer, with tail number N644UA, and a second that will resume service any day now.

Those new 777s operate the following routes, in addition to the occasional one-off:

And the first refreshed 767 is all over the place — last month, it flew the following routes, with an entirely random schedule:

The 777s have 60 Polaris seats and the 767s have 30, though one is reserved as a pilot crew rest on the smaller plane. Assuming each aircraft operates one flight per day, that's fewer than 1,000 passengers getting the full Polaris experience each day.

That said, the retrofits are moving forward, albeit at a slower pace than some may have hoped. A second 767 — N649UA — just returned to the US, while another — N648UA — is just about through the process and should re-enter service this month. A fourth, N656UA, arrived in Hong Kong for its retrofit a couple weeks ago and should be flying passengers again early next year.

United has also begin retrofitting its three-cabin 777-200s, removing the first-class cabin and replacing all of the seats in the plane. The business-class cabin will be outfitted with 50 1-2-1 Polaris seats, while economy will get 17-inch-wide seats in a 3-4-3 configuration, just like on the 777-300ER. That's great news for business passengers who land one of those retrofitted planes, but coach passengers will have an arguably less desirable experience. Economy will remain in a 2-3-2 configuration on the 767s, though, which now offer the most comfortable coach experience of any planes in United's fleet.

The first refreshed 777-200, most likely N784UA, has spent the past few weeks in Hong Kong, and should enter service early next year. At that point you'll need to look at the seat map — not the 777 model number — in order to determine whether or not you'll have the new seats. And until the retrofit process is complete for each sub-fleet, the updated planes most likely won't be assigned to a particular flight until a couple days before departure — so you'll need to wait until the last minute if you want to be sure to snag one of these refreshed planes. And, of course, substitutions are still possible.

United expects to have all 14 of its former three-cabin 767-300s retrofitted by the end of 2018, with all 767-300s complete by 2019. The refreshed 777-200s should all be flying by 2020. I've also heard some rumblings about a planned Dreamliner refresh, but nothing's been confirmed on that front — officially, United is "still evaluating [its] options" when it comes to the 787-8 and -9, but my guess is those will eventually get a version of the new seat as well. I wouldn't expect any 767-400ER retrofits, however, since those could end up being replaced before the airline gets around to refreshing them.

I love United's Polaris Lounge, but I've only been twice. How's that possible, considering I've flown long-haul on United more than a dozen times this year? Well, unfortunately there's only one Polaris Lounge worldwide — yes, still. One year after launch, Chicago O'Hare still sports the one and only Polaris Lounge. I'm similarly displeased, though Newark's Classified Restaurant has helped tide me over for now.

The next lounge will open sometime in 2018 — it's unclear which will come first, but my money's on United's largest US hubs, including Houston, Newark and San Francisco. Additionally, an expansion of the Chicago lounge is underway, which should help address overcrowding there.

United offers a handy "Polaris Tracker," which roughly outlines lounge opening and fleet plans — but, even here, there are many moving targets. Ideally, all of the lounges will open in 2018, but given the delays so far I wouldn't be surprised to see a straggler or two. The official word from United: "Construction is underway at additional United Polaris lounge locations, which will open in 2018," and a recent email listed a "Summer 2018" target for the Newark lounge specifically. I'm keeping my fingers crossed!

There are many moving pieces with a broad product overhaul such as this, and I've only touched on a few components here. For example, there have been service and amenity changes as well — United removed the second pillow in business class, and replaced other items, like pre-departure beverage cups and sundae bowls — but the experience largely looks the same as it did on December 1, at least on older aircraft.

The new seats really are a huge step up — they're hardly the best in the industry, but aside from the new Delta One Suite, which is only available on a couple of Airbus A350s at the moment, the new Polaris seat is my top pick from a US carrier, especially on the smaller 767. And I'll go out of my way to fly in the new seat, adding a couple hours to the trip if necessary — I just wish they were available on more planes.