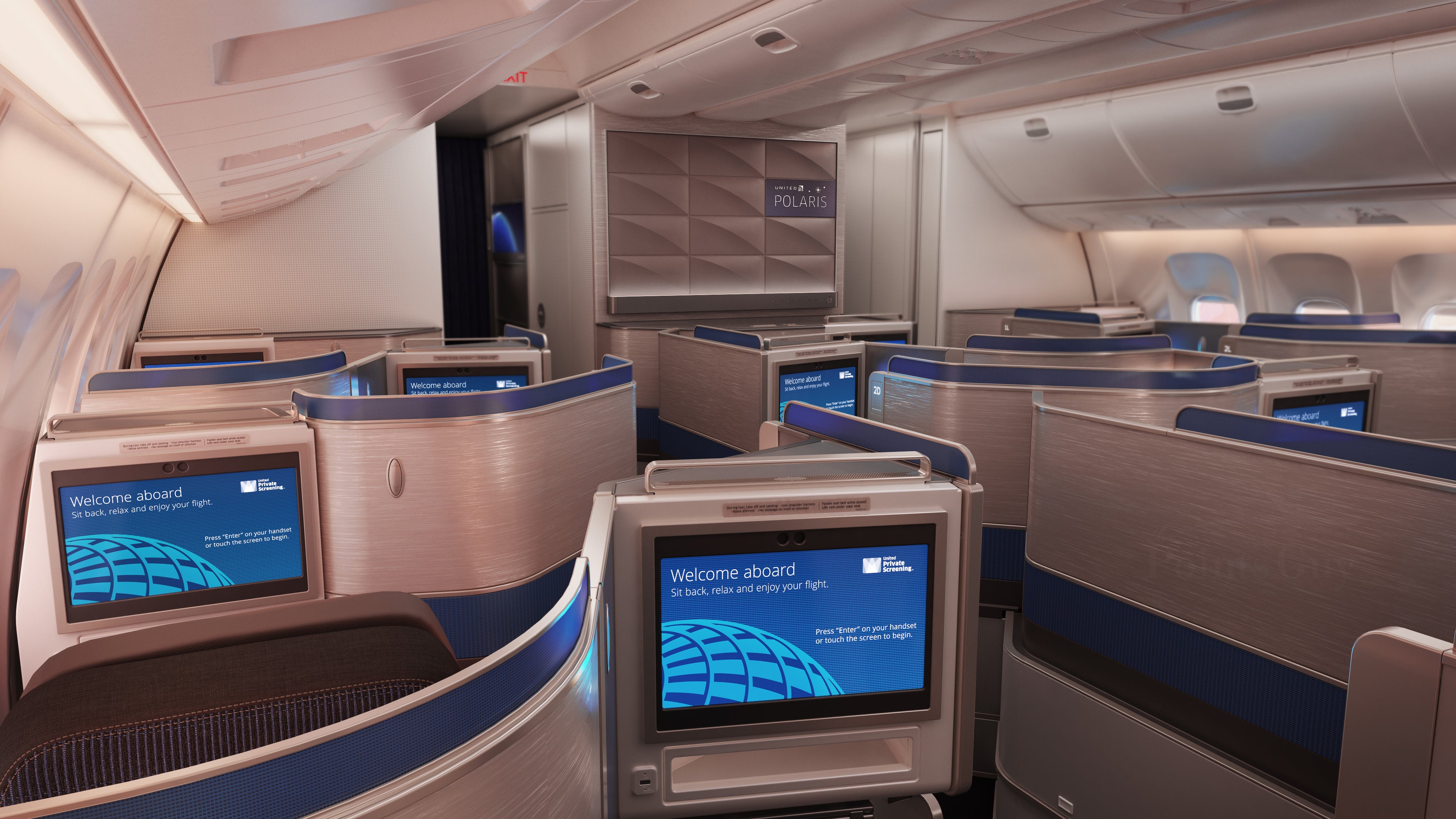 If you've flown United within the past few months, chances are you've seen the airline's Polaris branding — in the terminals, on the jetways, and, if you're fortunate enough to land a seat in the forward section of a 777-300ER (77W), in United's new business-class cabin itself.

But while the airline has ordered four more 77Ws, that brings United's total to just 18 of this aircraft type — for one of the world's largest carriers, that isn't many planes. Fortunately, the carrier is adding its much-improved business-class seats to its existing aircraft, too, starting with select 777-200s and 767-300s, commonly used on flights to Europe, South America and Hawaii. So even if you aren't scheduled to fly on a route operated by the 777-300ER, there's still a chance you'll get to experience the new seats.

And now, exclusively on TPG, United's sharing the first images of the new seats currently being installed on its first retrofitted 767-300 in Hong Kong:

From the renderings, these seats look a bit narrower than those installed on the 777-300ER — the side table appears longer and not quite as wide, for example. Still, there's no question that they'll be a huge step up from what United's flying on the 767 today.

United currently operates two versions of the 767-300 — one has a first-class cabin with six seats, and 26 business-class seats in a dense 2-2-2 configuration...

... while the other has only a business-class cabin (plus economy), with a total of 30 seats in a more spacious 2-1-2 configuration.

As United's currently working to eliminate international first class, that first config is being replaced with an all-business arrangement, with the airline's brand-new (and far-superior) Polaris seats. United operates a total of 14 767-300s with a separate first-class cabin, and those are the aircraft currently being updated now (the 767-400s will remain 2-1-2 for the time being).

Incredibly, United can fit the same number of Polaris seats as it offered with the older 2-1-2 arrangement, without making any cuts to the economy cabin, which will still offer 184 seats in total.

Meanwhile, the new Polaris seats are far more private and modern — the improvements are night and day, especially compared to the 2-2-2 business class United's still flying on a few of its 767-300s.

Just as with the 77W, some seats are more private than others — based on the seat map and renderings, I'd opt for window seats in odd-numbered rows on the 767, for example, since they're positioned farther from the aisle.

Now, while this 1-1-1 arrangement is fantastic for solo travelers, it's not ideal if you're traveling with a companion. Why's that? Well, on the 777-300ER, seats are arranged in 1-2-1 configuration, and alternating center seats are quite close together, such as where TPG and United CEO Oscar Munoz are sitting below:

Given the narrower 767 cabin, it isn't possible to have two seats positioned side-by-side, so it'll be challenging at best to chat with a companion while seated during a flight. That alone isn't a reason to avoid the Polaris config, in my opinion, since the seats are far superior overall, though it could prove challenging if you're flying with small children.

This is an obvious win for travelers — United's removing international 3-cabin first class and replacing its outdated 2-2-2 business class seats with its far superior 1-1-1 Polaris product. Of course, since these new planes are rolling out fairly slowly, it'll be anyone's guess whether or not you land a Polaris seat if you're booked on the 763, especially since the new configuration offers the same number of seats as United's 2-cabin 767-300s, which is probably what you'll see assigned to your flight until a couple days before departure.

These three-cabin 767s operate service to many of the carrier's key Europe (and select South America and Hawaii) destinations, so you can reasonably expect to see this arrangement pop up between any of the following cities:

They'll also likely operate domestic hub-to-hub routes, between Chicago (ORD), Houston (IAH), Newark (EWR) and Washington, D.C. (IAD), giving US flyers an opportunity to experience the Polaris seats (but not service) for a fraction of the price.

Have you managed to fly one of these refreshed 767-300s? Please send along your pictures to tips@thepointsguy.com and/or share your impressions below.