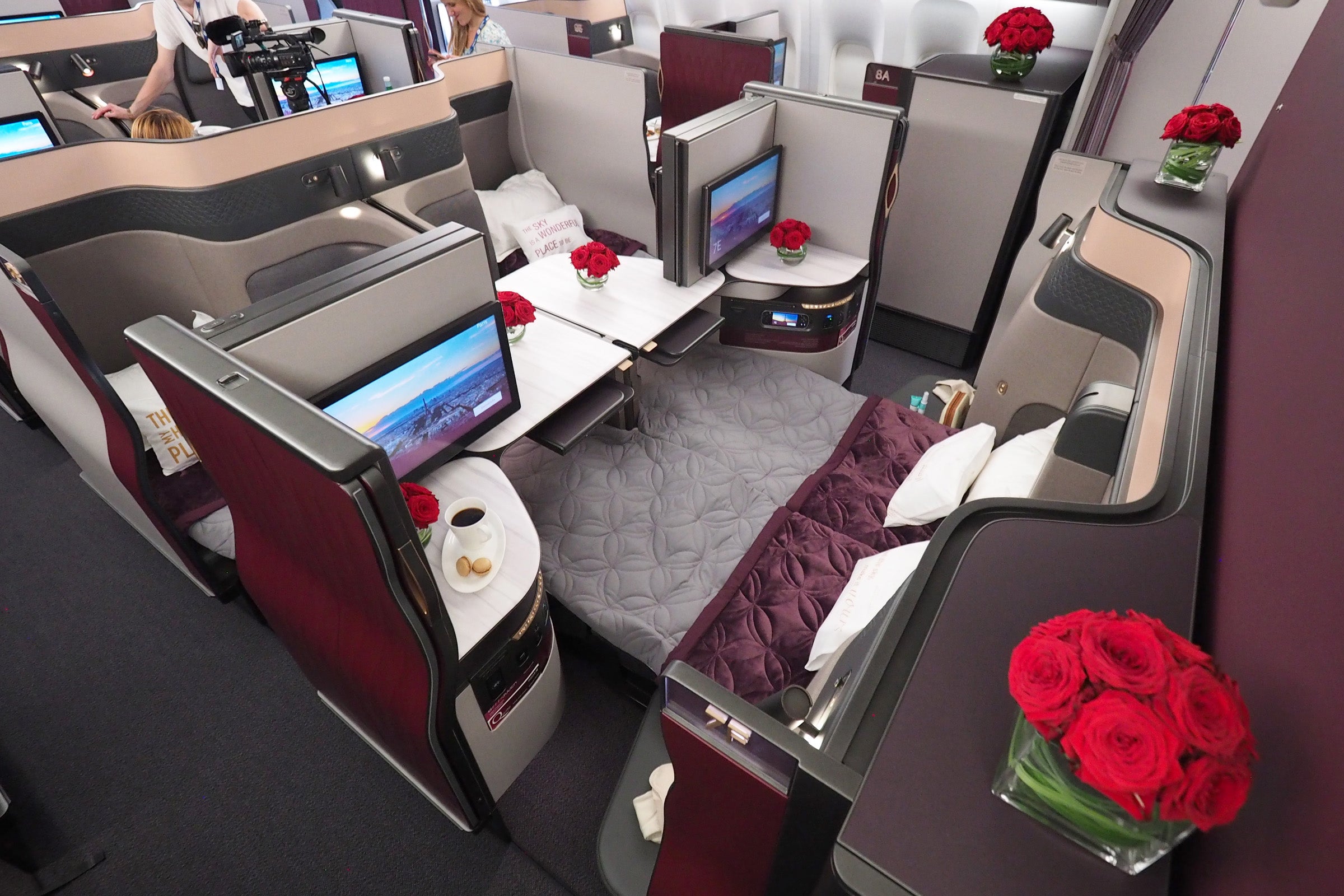 While some travelers may argue that the glory days of air travel are behind us, we at The Points Guy believe that we’re actually in a Golden Age of Travel. Sure, seats in economy may have never been tighter, but inflation-adjusted airfares have never been lower. Flights to both Hawaii and Europe are now regularly in the $300s and sometimes even cheaper.

And there's one thing that certainly didn't exist back in the yesteryear of travel: double beds in the sky. While there were sleeping berths on transatlantic flights in the 1950s, it wasn't until Singapore Airlines introduced its A380 Singapore Suites in 2007 that flyers could (comfortably) sleep next to each other in a double bed on a commercial aircraft.

Couples traveling together have a few excellent options to choose from, and TPG has reviewed them all. Here’s our list of the best double beds in the sky with video tours, reviews for each of them and how you can book each one for yourself.

The middle seats in Qatar's Qsuite are innovatively designed as staggered quads — with all of the dividers open, all four passengers are able to see each other. When all of the dividers are closed, they become four private mini-suites. Couples traveling together will want to choose the two seats staggered toward the middle (seats E and F). While there's a wall that typically separates these seats, that wall fully retracts to create a spacious double bed.

For the planes that don't have Qsuite yet, Qatar has an aggressive retrofit schedule. The airline plans to have Qsuite on all long-haul aircraft except the 787 Dreamliner by the "middle-end" of 2019 (although that's coming from Qatar's CEO, who's known to be a bit overly optimistic). For now, you can find the Qsuite on US routes from New York's Kennedy, Washington DC (IAD), Houston (IAH) and Chicago (ORD).

Which seats: While the row numbers may vary between aircraft, there's one constant: the adjoining seats are seats E and F.

Booking: With an ever-growing list of routes that have the new product, the cheapest option changes often. For US routes with Qsuite, the cheapest nonstop price we're seeing is $6,085 one-way from New York's Kennedy or $5,383 round-trip from Washington, DC to Doha.

Points: Qatar's decision to code Qsuite as business class instead of first class is excellent for points and miles travelers, allowing us to fly one of the most luxurious products in the sky for business class rates.

The most relevant mileage program for US-based flyers — and one of the better options overall — is American Airlines AAdvantage. You can use 42,500 miles one-way from European gateways to Doha or beyond into the Middle East or Indian subcontinent. From the US to the Middle East/Indian subcontinent, an award will set you back a very reasonable 70,000 miles. AAdvantage is a 1:1 transfer partner of Starwood Preferred Guest (2 day transfer time), but you can also transfer miles to AA via Marriott's Hotel + Air packages.

You can get even cheaper Qsuite awards using Japan Airlines' Mileage Bank. While one-way awards are similar in pricing to AAdvantage (42,000 one-way to Europe and 63,000 one-way to the US East Coast), round-trip awards are significantly cheaper. For example, you can fly round-trip from London-Doha-London for 63,000 miles or New York City-Doha-NYC for 85,000 miles round-trip. Like AA, Japan's Mileage Bank is a 1:1 transfer partner of only Starwood Preferred Guest (4 day transfer time). You can also transfer miles to Mileage Bank via Marriott's Hotel + Air packages, although JAL is part of the worst transfer package option. Finally, keep in mind that JAL is raising prices on many of its premium cabin redemptions in November.

While the classic Singapore Suites are still one of the top first class options, Singapore made its Singapore Suites even more sweet with a completely revolutionized product, which started flying in December 2017. TPG checked it out for himself in February 2018 and was absolutely blown away.

The classic suites are found on most Singapore Airlines A380 routes. Most notably for US-based flyers, Singapore flies an A380 daily between New York's Kennedy (JFK) and Frankfurt, Germany (FRA).

With the new suite debuting only half a year ago, you can't find it on many routes. So far, Singapore's new Suites are flying from Singapore (SIN) to Sydney (SYD), Hong Kong (HKG) and London Heathrow (LHR). Starting August 1, you can also try out the new product on Singapore's A380 flights to Shanghai (PVG) and Zurich (ZRH).

Which seats: The classic A380 Singapore Suites are laid out in a 1-2-1 arrangement. On this aircraft type, you're going to need to select seats 2C/2D or 3C/3D to get the double bed. The new Singapore Suites are arranged as six suites in a 1-1 configuration. You'll want to select suites 1A/2A or 1F/2F in order to get adjourning suites.

Booking: Considering how amazing the new suites are, you can book them for a relatively reasonable price. A one-way nonstop flight from Hong Kong (HKG) to Singapore (SIN) in the new suite starts at $2,113, and a round-trip is just $3,263 on the same route. The only Singapore Suites option from the US — nonstop flights between JFK-FRA using the classic suites — start at $9,813 round-trip.

Points: The only way of booking Singapore first class awards is through Singapore's own KrisFlyer program. The good news is that it's not hard to collect these miles. KrisFlyer is a 1:1 transfer partner of every major mileage program: American Express Membership Rewards (under 24 hours), Chase Ultimate Rewards (same day transfer), Citi ThankYou Points (1 day transfer) and Starwood Preferred Guest (4 days). You can also transfer miles to KrisFlyer via Marriott's Hotel + Air packages, but it's a poor transfer option.

Singapore Suite award rates on these routes are:

While the new A380 Singapore Suites justifiably got a lot of attention, Singapore also improved its A380 business class cabin. One of the improvements: the ability to fully drop the middle seat divider to create a quasi-double bed.

I say "quasi-double bed" as the two passengers aren't truly able to lay side-by-side. Instead, because of the sharp angle of the footwell, it's more of a head-to-head arrangement.

The only exception here are the bulkhead seats, which have a large footwell directly ahead of the seat, allowing couples to lay side-by-side.

The new A380 business class seats are only flying from Singapore (SIN) to Sydney (SYD), Hong Kong (HKG) and London Heathrow (LHR). Starting August 1, you can also try them out on Singapore's A380 flights to Shanghai (PVG) and Zurich (ZRH).

Which Seats: On the new A380, the dividers between all middle seats (D and F) can be lowered. But, you'll want to pick the bulkhead seats 11D/11F and 91D/91F for the most comfortable double-bed experience.

Booking: If you want to try these for yourself, you can fly them intra-Asia for a bargain. A one-way nonstop flight from Hong Kong (HKG) to Singapore (SIN) in the new seats starts at $1,227, and a round-trip from SIN-HKG starts at just $1,360.

Points: Since Singapore Airlines award availability almost never makes its way to partners, your best way of booking Singapore business class awards is through Singapore's own KrisFlyer program. The good news is that it's not hard to collect these miles. KrisFlyer is a 1:1 transfer partner of every major mileage program: American Express Membership Rewards (under 24 hours), Chase Ultimate Rewards (same day transfer), Citi ThankYou Points (1 day transfer) and Starwood Preferred Guest (4 days). You can also transfer miles to KrisFlyer via Marriott's Hotel + Air packages, but it's a poor transfer option.

Award rates on these routes are:

The product first debuted in late 2014, and TPG made sure to book the very first flight out of New York’s Kennedy (JFK) on the new product. It made for quite the memorable Thanksgiving...

Which Seat: There's only one Residence on the Etihad A380 and it's listed on the seat map as seat 1A.

Points: Technically, you can book the product with points. But you can only redeem Etihad Guest Miles, and rates currently start at 3,022,222 miles one-way, plus $30 in taxes and fees. Etihad Guest is a 1:1 transfer partner of American Express Membership Rewards (instant transfer), Citi ThankYou Points (7-day transfer) and Starwood Preferred Guest (8 days). You can also transfer miles to Etihad via Marriott’s Hotel + Air packages but Etihad Guest isn’t the best option available… and there are much better uses of your points.