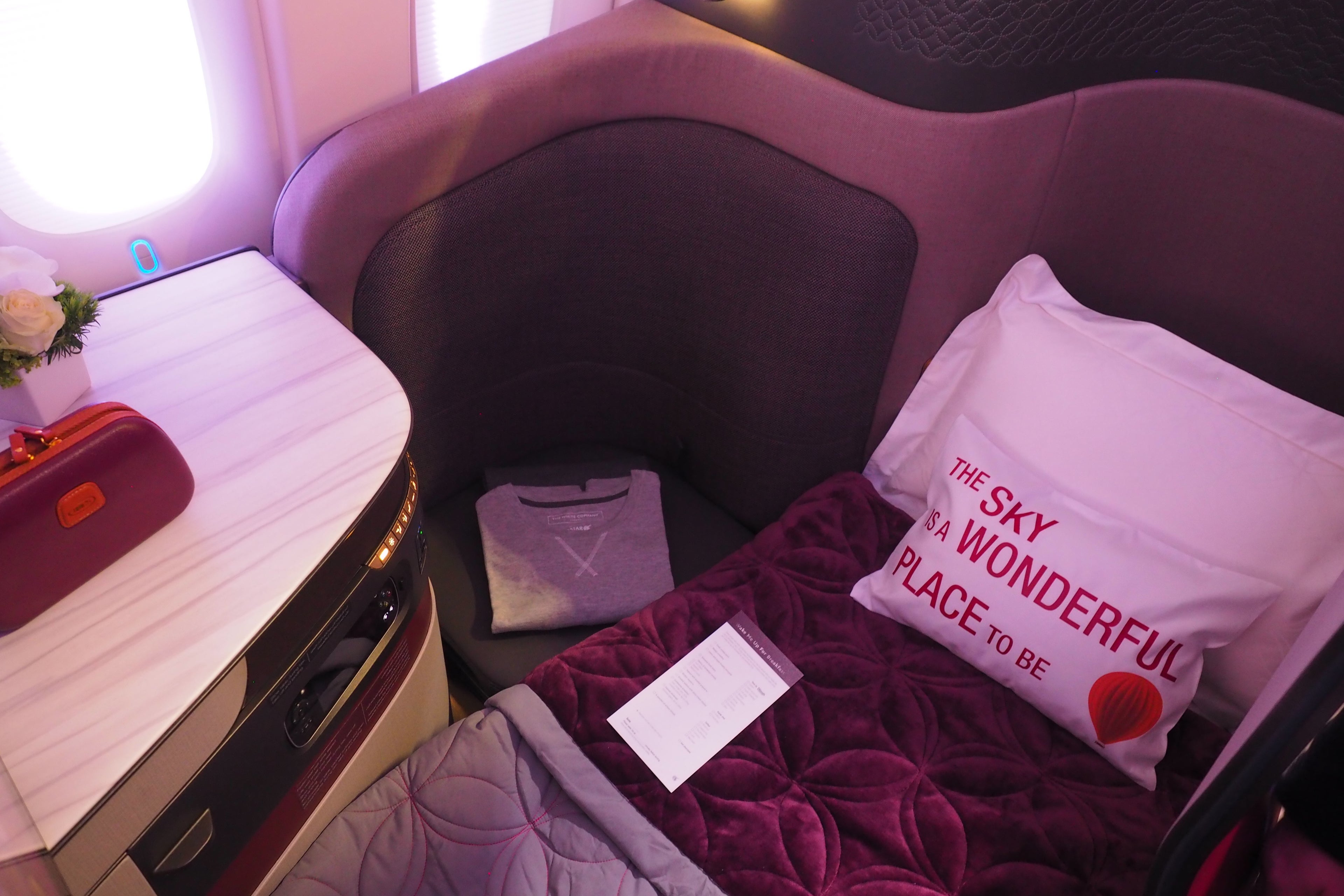 Qatar Unveils New "Qsuite" Business-Class Product
This post contains references to products from one or more of our advertisers. We may receive compensation when you click on links to those products. Terms apply to the offers listed on this page. For an explanation of our Advertising Policy, visit this page.

After much fanfare over the past few weeks, Qatar unveiled its new business-class product at ITB Berlin this morning. Named the Qsuite, the 1-2-1 arranged seats promise to deliver "First in Business Class". Qatar is known to make grand proclamations, so we were curious to find out if it could back up its promises with a truly special product — this time it certainly has.

After getting the chance to fully test out the new seat, here's TPG's first take on the new product:

Before the product was unveiled, a video showed off the new Qsuite product for the gathered media.

Qatar Airways Group Chief Executive, His Excellency Mr. Akbar Al Baker led the ceremony. He highlighted the design features and noted that what we were about to see is "globally patented" — meaning none of Qatar's competitors can copy it.

One thing that we noticed right away was the spaciousness of the new seat. It seems Qatar has found the right balance between providing sufficient footwell space while not compromising seat width.

All Qsuite seats recline into a fully-flat 79-inch (6 foot 7 inches) bed. The table located next to the bed is large and provides a storage shelf under the surface.

The storage bins located next to each seat can also be used as a stool.

Half of the middle seats have the ability to turn into a "double bed" with the removal of a privacy divider that would otherwise be in place.

Many business class products feature lie-flat seats that are plenty long when fully reclined, but the foot wells are so small that they prevent taller passengers from being comfortable. Not so with this product — TPG's 79-inch height and size 14 shoes were all able to fit fine in the Qsuite.

One of the truly revolutionary parts of this product is the "quad design". With a few easy steps, cabin crew can open up panels to convert two pairs of middle seats into a four-person mini-room. The airline designed this feature to allow families, friends or business groups be able to travel comfortably while still being able to interact.

Qatar showed a mock-up representing just how much work you'll be able to do while mid-flight thanks to the quad-design.

During the press conference, Al Baker revealed that the first route to feature the new product will be its Doha (DOH) to London (LHR) flight — the first one should happen in June, though the exact inaugural date hasn't been revealed. The first aircraft to receive the new Qsuite product with be the Boeing 777 with an "aggressive" reconfiguration scheduled to roll out Qsuite to all of Qatar's Boeing 777 and A350-900 aircraft. The airline's Airbus A350-1000 aircraft will be delivered with the Qsuite product already on board.

While the soft product was only partially on display in the model seats, the press conference revealed more details. The in-flight entertainment promises to be industry-leading, with "more than 3,000 entertainment options" organized into a new easier-to-browse interface.

For those passengers whose first priority is to sleep, you'll have newly-designed pajamas, "full turndown service" and the ability to activate a "do not disturb" indication. Ambient lighting will be individualized for each passenger "based on their mood". Overall, Qatar is promising "an experience that redefines your expectations".

And a 360° tour of the new business class cabin:

What's Next for Qatar

Qatar CEO Al Baker teased even more developments coming down the pipeline. Next to be announced will be "Best in class in-flight connectivity." And, since the QSuite product we saw today won't fit properly on the Boeing 787 Dreamliner or the Airbus A380, the carrier is already working on a redesign for those aircraft.

When asked again if Qatar Airways will introduce a premium-economy product, Al Baker again said no, but — as the airline "Want[s] to be the best in the world in everything we do" — a redesign of its current economy seat is planned, although no further details are provided at this time.

For even more Qatar Airways and ITB Berlin coverage, make sure to follow TPG on Snapchat and Instagram.