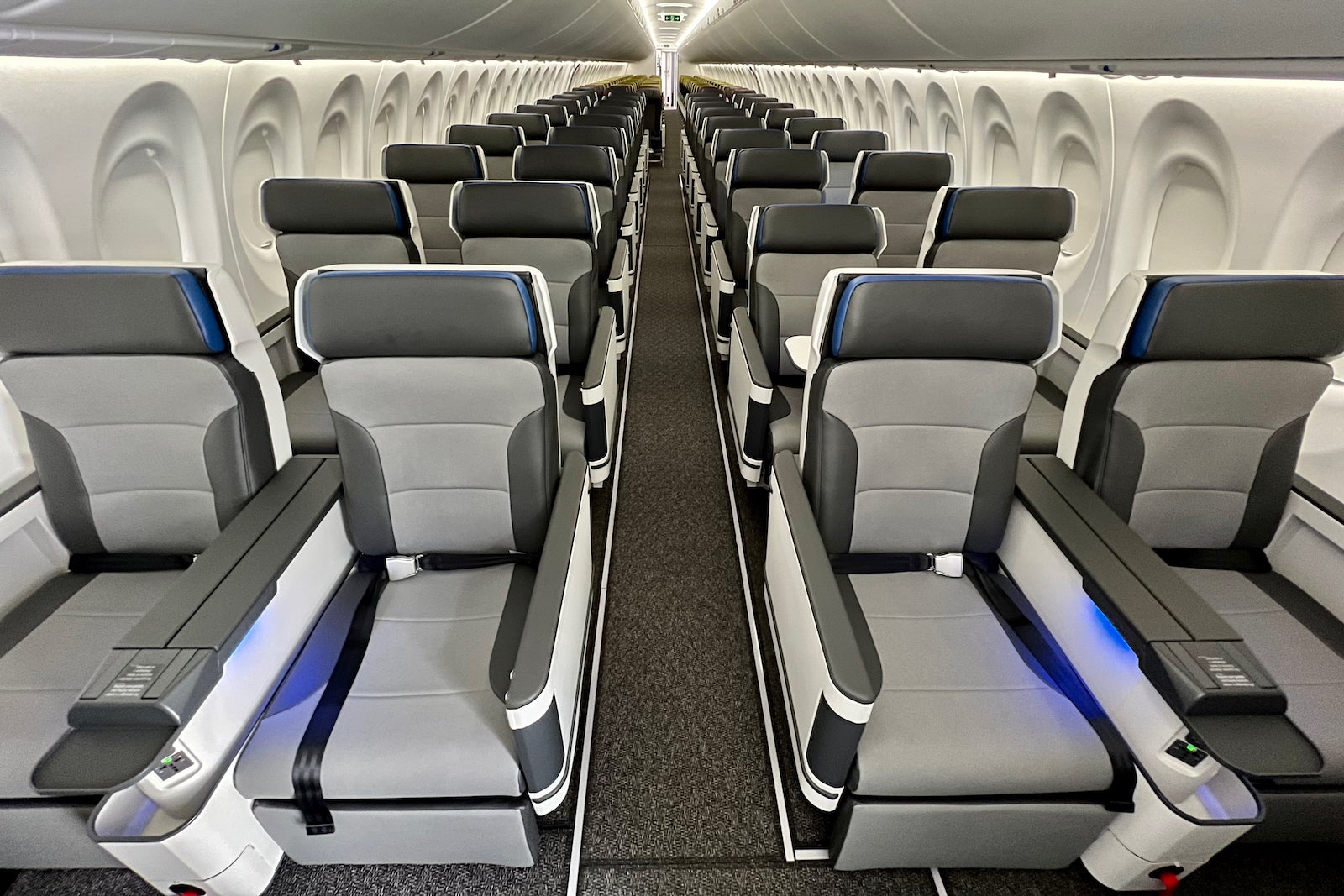 You may have never heard of Breeze Airways before. But after seeing this plane, you might want to add them to your list.

Breeze, one of America’s newest startup carriers, first took to the skies in May, with a small fleet of used Embraer 190 family aircraft. The airline is the brainchild of serial airline entrepreneur David Neeleman, who’s perhaps best known for launching JetBlue in the U.S.

His latest project, Breeze, is about to enter a massive growth phase, as the airline unveiled its first of 80 new Airbus A220-300s on Tuesday at the planemaker’s assembly line in Mobile, Alabama.

While the plane itself is big news for Breeze — it's likely to enter revenue service in 2022 — it’s also a show-stopper from a passenger experience perspective: it sports a whopping nine-row first-class cabin with 36 recliners that span nearly half to the plane’s fuselage.

Once inside, it’s immediately clear that this is one of the most premium-heavy cabin configurations in the skies. Domestically, it rivals United’s “high-J” Boeing 767-300ER, which features a 16-row Polaris cabin with 46 pods, and American's Airbus A321T — that carrier's high-end transcon workhorse.

There are three other A220 operators in North America. Air Canada and Delta offer a first-class cabin, but both have just 12 recliners on their A220-300s — 24 fewer than Breeze will have.

The third operator, JetBlue, outfits its A220-300 in a 140-seat all-economy configuration.

Breeze selected the Safran Z600 for its first-class recliner. Each row is arranged in a 2-2 configuration, with 39 inches of pitch and 20.5 inches of width.

There’s a footrest at each seat, too — a nifty feature that you don’t usually see in domestic first-class products.

A large tray table folds out from the center armrest, with a built-in cupholder and tablet stand as well.

Behind each seat is a literature pocket, phone stand and coat hook. You’ll find a water bottle storage compartment underneath the forward seats.

Each first-class recliner has access to a universal power outlet, as well as a USB-A and USB-C charging port.

Notably there’s no privacy divider between these seats, and some flyers might complain that they also lack in-seat storage. Other than the literature pocket and a small nook between the seats, you’ll need to keep you items stowed in your carry-on bags.

There are two manual buttons built into each armrest — one controls the recline, and the other controls the legrest.

As part of the unveiling, Breeze is introducing a third fare bucket, dubbed “Nicest,” which includes a first-class seat assignment, additional checked bag and free Wi-Fi.

While you might be on the hook for a $200 (or more) upcharge for domestic first class on the legacy carriers, Breeze will significantly undercut the competition. Neeleman estimates that he’ll charge around $25 to $50 extra for the “Nicest” fare — a phenomenal deal for one of these recliners.

Interestingly, there’s no cabin divider set up between the biz and coach cabins — and the airline isn’t planning to install one, according to Neeleman.

Right behind Row 9 is where you’ll find the 90 coach seats. The first two rows, 10 and 11, are in an extra-legroom configuration with 33 inches of pitch, while the regular coach seats have between 30 and 31 inches of pitch.

The exit row has fixed armrests and generous legroom, but due to the exit door, the windows aren’t nearly as large as the others.

The second row of extra legroom seats, Row 11, has 33 inches of pitch, but the windows aren’t perfectly aligned for easy shoulder-level viewing.

All coach seats are based on the Safran Z110i model with 18.8 inches of width.

They’re lined in leather and have red and yellow accents. A Breeze executive noted that these finishes are just temporary, with new ones being installed in the coming months that will feature another shade of blue.

Coach is arranged in an A220-standard 2-3 configuration, with one fewer middle seat per row than you typically find on larger single-aisle jets.

Each coach seat features both a USB-A and a fast-charging USB-C port.

Additionally, the headrests can be raised and lowered, and the wings can be angled for added comfort.

As for amenities, all of Breeze’s A220s will feature satellite-based internet connectivity. The airline hasn’t yet selected a provider, but expects a decision to be announced in the “coming weeks.”

So far, Neeleman has confirmed that there will be a free messaging option, and customers purchasing the “Nicest” fare will be entitled to a complimentary full-flight access pass.

Breeze isn’t installing seat-back entertainment, but it will offer streaming options to your mobile device.

There are three lavatories on the Breeze A220, one at the front for first-class flyers, and two at the back for coach passengers.

In addition to the swanky cabin configuration, the A220 has some other flyer-friendly features, including large overhead bins with room for one rollaboard per passenger, oversized windows (measuring 11 inches wide by 16 inches tall), roughly 20-inch wide aisles and snazzy mood lighting.

Breeze’s Airbus A220 will soon become the swankiest commercial jet in the domestic skies.

With a massive, 36-seat first-class cabin, nearly half of the plane is outfitted with fancy recliners.

The 90-seat economy cabin looks quite comfortable too, thanks to the leather seats, a favorable 2-3 configuration, larger overhead bins and easy access to power outlets.

Once you see it for yourself, you might be hoping that Breeze and its new A220 lands in your closest airport.