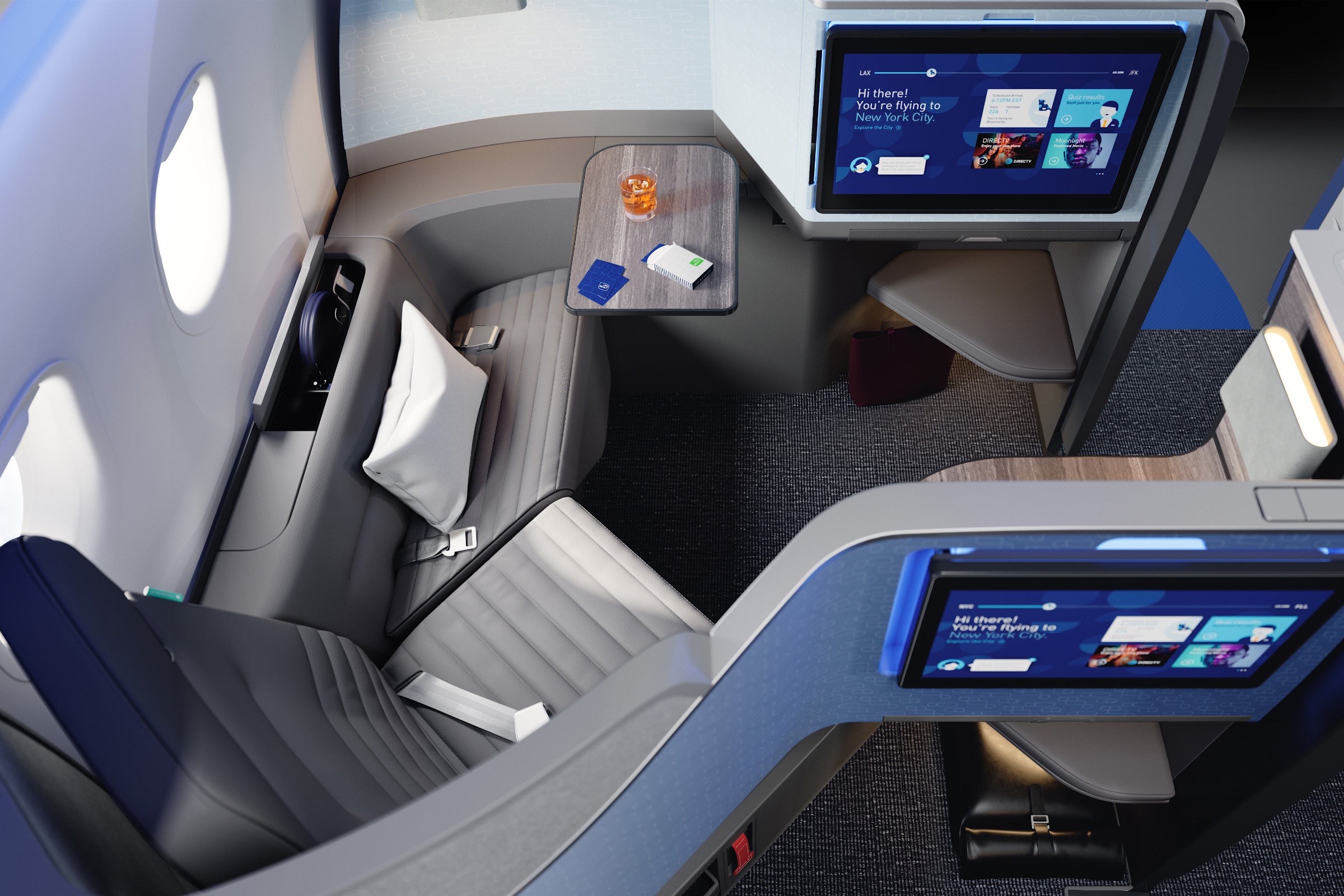 It's almost here! After five years of research and development, JetBlue is finally ready to show off its next-generation business-class product, launching soon on flights to Europe and within the U.S.

Each new business-class seat will offer a sliding door, and every cabin will feature two versions of the new product.

First, the airline's extra-spacious Mint Studios will be positioned at the bulkhead row, with two windows each, more personal space, a belted side seat (for guests to join for a chat or meal) and a larger 22-inch display, as seen in the rendering below.

Mint Studios will be sold at a slight premium, though the airline hasn't detailed pricing just yet. I'd expect a modest up-charge at booking or after purchase — similar to the airline's Even More Space economy offering, today.

The remaining seats will be branded as Mint Suites. While window alignment varies, they're otherwise identical — all suites are ADA compliant, and include doors that slide completely shut.

Suites also include 17-inch displays that tilt down for easy viewing when reclined (more on that below); several storage areas, including a large slide-out drawer below the display, a bottle compartment to the side of the seat and bag storage underneath the ottoman; and integrated Qi power for wireless device charging by the window, compatible with the latest iPhone models and Android smartphones.

The airline's new product clearly offers more privacy than the 2-2 seats available in odd rows today, and possibly even the current Mint "suites" in rows 2 and 4 — though we'll have to give it a try before issuing a final verdict.

Notably, JetBlue is able to fit the same number of seats into a similar space — 16 "new" suites occupy the same footprint as 16 of the airline's current staggered seats, opening up the door to possible A321 retrofits down the line.

Like most of you, I can't wait to experience the new Mint on a plane — I had an opportunity to check out a near-final version at the airline's New York-JFK maintenance hangar in the meantime though.

While it wasn't quite as polished as the finished product seen up top, I was able to get a sense of the space, seat and overall layout.

JetBlue's new suite is based on the Thompson Vantage Solo, though the design adds more privacy, thanks to an extended dividing wall and sliding door. Notably, the current Mint seat is based on Thompson's original Vantage design, and the new version, while more private, comes along with an almost identical footprint.

JetBlue added its own touches throughout, including a Tuft & Needle mattress embedded in the seat, wireless charging by the window and fun design elements, such as the "jetblue" written in Morse code below.

The airline also added a notch within the side table, as a second spot to store your device, along with a cord organizer by one of the two universal AC outlets, a "do not disturb" indicator (that glows blue instead of red from the aisle) and a "cement" LED sconce.

JetBlue's design team clearly shares my frustration when it comes to viewing angles, too. Now, you can tilt the display down so you can see it when the seat's reclined or in bed mode — a much-welcome boost. (Note that the display below, like many other design elements, is not yet final.)

I also love that there's a dedicated spot for your laptop — I'm always jamming mine into the magazine holder or seat-back pocket, and who knows what else ends up in there (read: dirty diapers and other... hazardous waste).

Personally, I'm most excited about the sliding door, which you can see in action below. The mock-up I saw doesn't close completely, but the final version will.

As with the carrier's existing product, customers flying in the new suites will get to experience the "soft product" improvements JetBlue rolled out toward the end of last year, including improved catering, new bedding, amenity kits and more.

How to fly the new Mint

Initially, JetBlue's new Mint product will be available on the airline's latest A320-series planes, including the Airbus A321LR, which will operate transatlantic flights and offer a total of 24 Mint seats, and the A321LD, a subset of the airline's A321neo fleet, with 16 seats in business class.

While JetBlue's map is always evolving, as of now, you can generally find Mint on the following routes, though certain flights — such as those to the Caribbean — only offer business class on certain days.

JetBlue is expected to launch service to London with the A321LR later this year, and all of those flights will offer the new Mint Studio and Mint Suite. You'll actually find the new product flying domestically first, though — the carrier's set to begin service with the A321LD between New York-JFK and Los Angeles (LAX) as soon as June 2021.

We don't yet know which JFK-LAX flights will offer the new product, but we'll be sure to let you know just as soon as we do. Either way, that's great news for budget-conscious travelers — JetBlue consistently offers transcon Mint flights starting at $529 each way, though premium-cabin redemptions aren't quite as appealing, at 47,900 points and up.

I'm very excited to see that JetBlue will still be rolling out the new Mint this year, despite various pandemic-related setbacks. Mint Studio looks especially exciting, with a slick design and lots of extra space, but the new Mint Suite feels like a notable upgrade as well — especially when compared to the airline's current paired (2-2) business-class seats.

Most of all, I love that the JetBlue team took customer and flight attendant feedback to heart, and implemented some much-welcome improvements, including doors and aisle access for every passenger, a real integrated mattress, clever storage compartments and a display you can actually see clearly from the bed.

Related stories
Here are the best Black Friday travel deals of 2022
Great deal: Book business class tickets at premium economy prices with this Avianca LifeMiles sale
Holiday gift guide: TPG’s 22 travel-friendly picks for 2022
Vail Resorts lift-ticket sales capped; buy your Epic Pass by Dec. 4
Featured image by (Rendering courtesy of JetBlue)
Editorial disclaimer: Opinions expressed here are the author’s alone, not those of any bank, credit card issuer, airline or hotel chain, and have not been reviewed, approved or otherwise endorsed by any of these entities.