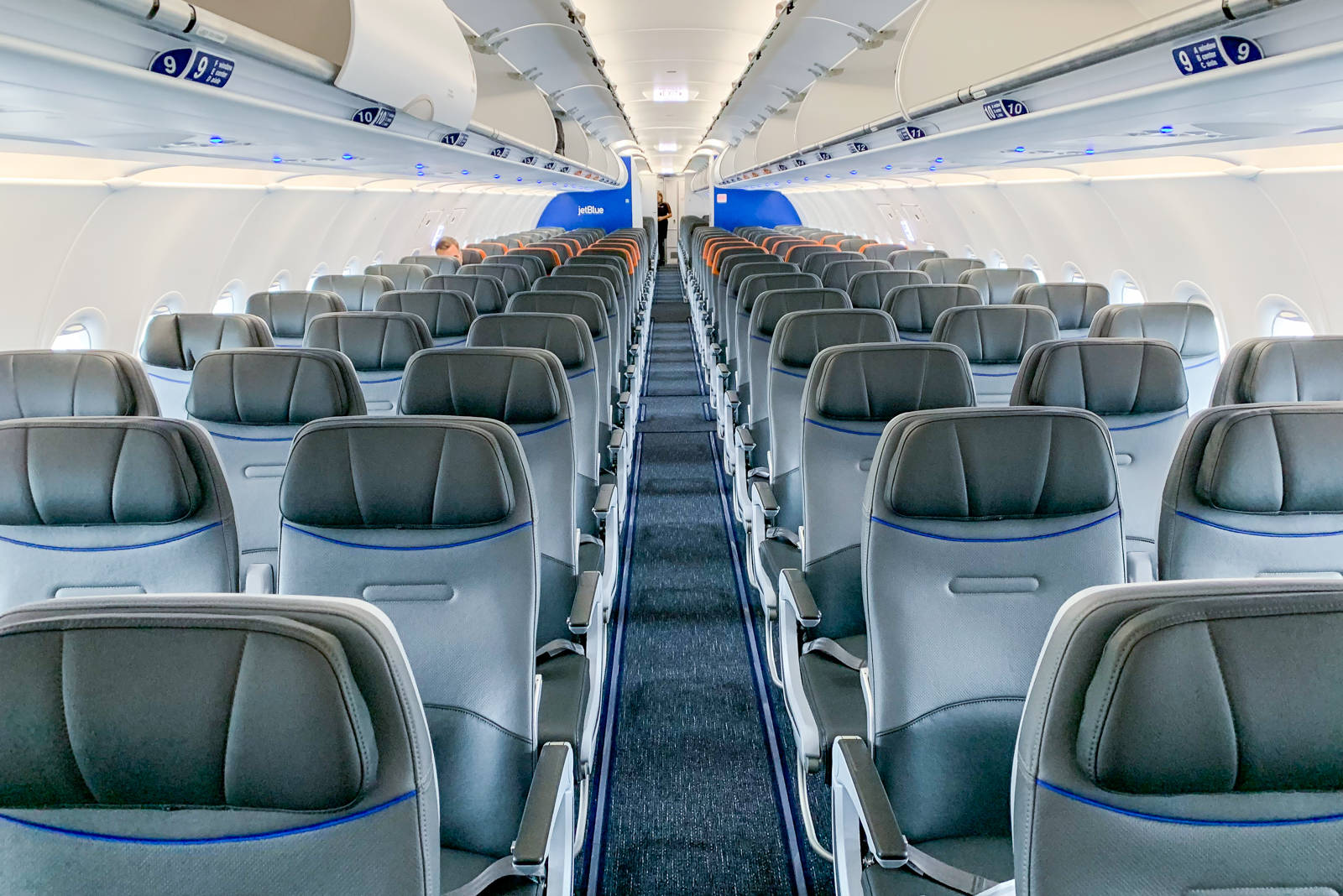 Airlines sometimes give us surprises, and this Monday night, JetBlue gave us a surprise that I was really excited about. It scheduled the brand-new Airbus A321neo on its first commercial flight, two weeks before the plane's official debut.

Naturally, I was excited by the opportunity to get a first-hand look aboard, since JetBlue has been tight-lipped about what it'd look like inside. Aside from promising that the plane would feature a similar interior to the 'Phase 2' retrofit program for the carrier's Airbus A320s, we didn't know much else until Tuesday morning's flight to Orlando. We had not been warned in advance by the airline, and bought a ticket as soon as we randomly spotted, the day before, the A321neo on a scheduled flight.

The A321neo is a re-engined, modernized version of the A321 that is currently JetBlue's flagship. Thanks to the new engines, it can fly longer than standard A321s, and it also sports other technical refinements.

The gate area at Gate 14 at New York-JFK's Terminal 5 was packed with families headed to Disney World, though there was definitely a buzz about the new airplane once the gate agents announced the significance of the flight. I couldn't wait to hop onboard and check out the three-month-old bird, delivered on June 29th.

Like most JetBlue planes, the A321neo is configured in all-economy class, with 200 seats arranged in a 3-3 layout. This version does not have JetBlue's Mint premium class, winner of the 2018 TPG Award for best domestic business class.

The first thing I noticed was how fresh and clean the plane was. As you'd expect, everything was in pristine condition.

The overhead bins are the same size as the carrier's legacy A320s, which I find to be plenty large for standard rollaboards.

Between the two cabins is a small galley, featuring a pantry and lavatory. The pantry is reminiscent of the carrier's Mint-equipped A321s, though this one doesn't have as much storage space (and doesn't offer as varied a beverage selection.)

The Collins Aerospace Meridian seats are the same as those being installed as part of the carrier's "Phase 2" retrofit program for the A320s. The seats are slimline and feature an above-average 18.7 inches at their widest. The armrests are quite narrow, but they all move up and down (except for those adjacent to the window).

Thankfully JetBlue installed fully adjustable headrests that should help improve the sleeping experience on this aircraft. Sleep will be very important on this plane because the A321neo will be flying the carrier's longest route, a roughly 7-hour flight from New York-JFK to Guayaquil, Ecuador.

I found the multiple seat-back pockets to be quite useful for storing water bottles and other loose items.

The tray table measured 15.5 inches wide and 8.5 inches long, which just barely fit my 13 inch MacBook Pro. At least the tray table slid back and forth for easy egress.

There are four lavatories on this aircraft. Aside from the bathroom behind row 23, there's one in the front of the plane and two in the back galley. The ones in the back are quite small, so I'd definitely recommend trying to use the forward or mid-cabin lavatory.

Best Seats on the A321neo

The best seats in the plane are definitely those in Even More Space. I'd avoid Row 1 if you aren't a fan of the bulkhead, and I'd also steer clear of Row 16 since those seats don't recline.

Among the regular Core seats, I found those in the aft mini-cabin to be much quieter than the larger main cabin. If you don't mind being one of the last people off the plane, it may make sense to choose a seat in the back.

The best Core seat is 25A. This window seat has unlimited legroom since it's missing a seat in front of it.

If Seat 25A is taken, you can score some free extra-legroom by choosing a Core seat in the exit row 24. Just beware that you'll need to store all your belongings in the overhead bin.

The rest of the core seats are pretty similar, except for Row 15, which doesn't recline.

The highlight of the plane's in-flight entertainment was the crisp, 10.1 inch HD screen. There were 157 on-demand movies with plenty of new releases like A Star is Born, Free Solo and On the Basis of Sex. There were 53 TV shows titles on offer as well. Interestingly, JetBlue loaded complete seasons of some shows and opted for single episodes for others.

Ever since JetBlue's first flight in 2000, the carrier has offered live TV. With the A321neo, JetBlue has taken live TV to the next level. Each seat features 100+ channels of DIRECTV with a built-in DVR mode that lets you pause and restart programming.

Av-Geeks will be thrilled to know that JetBlue ditched its old looping airshows, in favor of a fully customizable one with multiple views and plenty of statistics.

JetBlue has also bid farewell to the (often dirty) armrest remotes in favor of a fully touchscreen experience. If you're missing the remote, don't fret. The A321neo features a nifty feature which allows you to use your phone as a remote by wirelessly connecting it to the TV system.

The feature was really cool and easy to use, and didn't take much time to setup.

If you're looking to connect to the internet, JetBlue has you covered with free gate-to-gate high speed Fly-Fi, the airline's name for Wi-Fi. The new system connects to the ViaSat-2 satellite, which makes for a faster connection with coverage in more areas like the Caribbean, Latin America and even parts of South America.

There's also enough power to keep all your devices charged. There are two power outlets for every three seats in Core and one power outlet per seat in Even More Space. Each power outlet also features a USB port. If you need more juice, each screen has a USB port as well.

Regardless, the best in-flight entertainment I saw was on our taxi out to runway 22R at New York-JFK, when we had a water salute to the new plane.

JetBlue's A321neo puts the carrier in a position of success for the next few years. The seats are far more modern than on its predecessor, all while retaining the industry-leading pitch that JetBlue is known for. There are even some surprises, like the mid-cabin pantry and the ability to use your phone as a TV remote.

There's plenty of content to keep you entertained, including tons of on-demand movies, full seasons of TV shows, 100+ channels of live TV and high-speed Wi-Fi.

With comfortable seats and endless entertainment, you may not want to step off the A321neo. Or you can do what I did and fly the exact same plane right back to where you started.