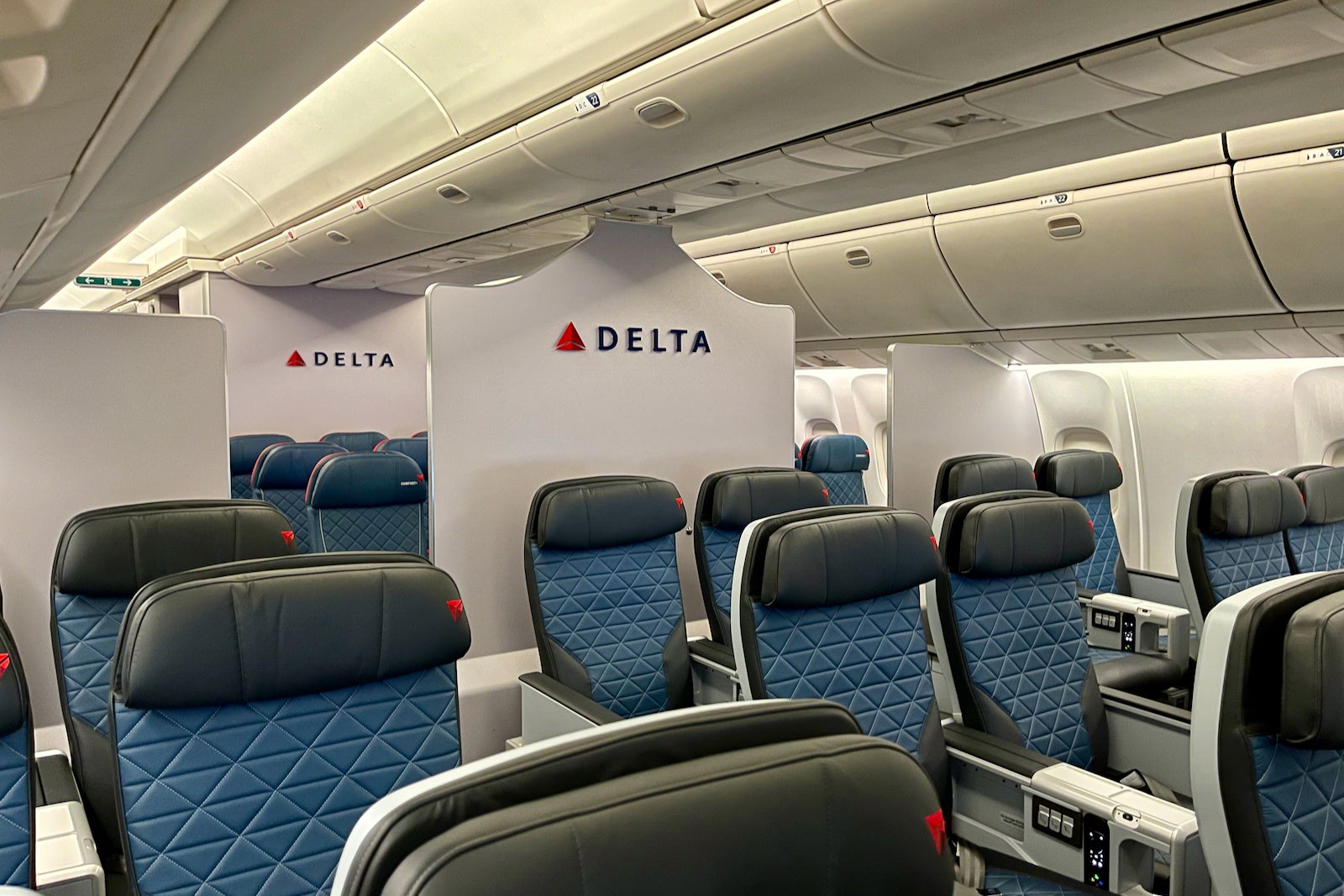 In addition to new deliveries, the Atlanta-based carrier is retrofitting a major swath of its international fleet, starting with 19 of its Boeing 767-300s.

These Boeing widebodies are getting a brand-new Premium Select cabin, along with a host of other enhancements, including modernized finishes in both the Delta One and coach cabins.

The first plane to undergo the reconfiguration, a Boeing 767-300 registered N178DZ, was modified in Kansas City, Missouri and recently re-entered service.

I’ve been tracking the specific jet since it started flying again in late June, and I finally had the opportunity to check it out in Atlanta during an exclusive tour.

Premium economy is the big bet

As airlines around the world keep revolutionizing their business-class cabins, a new market has emerged for a product that fits between a private lie-flat pod and a standard coach seat.

With spacious seats, a quieter cabin and an elevated onboard experience, premium economy is designed to bridge the gap between business class and coach.

Delta’s take on the cabin, dubbed Premium Select, first debuted on the carrier’s flagship Airbus A350.

Since then, its footprint has expanded to the Airbus A330neo and Boeing 767-400.

Now, you’ll find it on the Boeing 767-300 fleet, too. Delta clearly believes that there’s a market for the product, so it makes sense that its footprint is expanding further.

Premium Select on Boeing 767-300 is outfitted in a spacious 2-2-2 configuration, meaning that there are no middle seats.

While the seat itself is reminiscent of the airline's domestic first-class recliner, it sports a bunch of added bells and whistles that'll make it more comfortable for long-haul flying.

For one, each seat has both a leg rest and a footrest.

This includes the bulkhead row as well, which is a nice touch since some other airlines modify the bulkhead seats with either less recline or a less comfortable leg rest.

Just note that the last row of Premium Select is missing windows.

There's also plenty of storage at each recliner, including a dedicated water bottle holder, a deep pocket for a tablet or book and a larger-than-normal seat-back pocket.

The bi-fold tray table comfortably fit my 10.5-inch iPad Pro and is large enough for most laptop computers.

Each seat has its own universal power outlet as well, with a separate USB-A port. Hopefully, Delta will soon decide to install the newer USB-C standard across its fleet, which should help charge the latest devices at a faster rate.

The manual seat controls and entertainment remote are located on the inner edge of the armrest. You'll find a 10-inch high-definition touchscreen loaded with Delta's latest entertainment software at each seat as well.

There's another major improvement that Delta added to its retrofit program that might not immediately catch the eye.

From nose to tail, the airline installed new seat cushions in all cabins.

These new memory foam cushions are noticeably more comfortable than the slimline seats you'll find on many other airlines. While I only had a few minutes to put it to the test, it was immediately clear that there was much more padding at each seat.

This will be a game-changer if you're flying on this jet on a long-haul route.

Delta One gets a fresh cover

Delta One, the airline's business-class cabin, also got an upgrade, but not necessarily the one you're hoping for.

Delta's 767-300s feature the first-generation Thompson Vantage seat, which is woefully outdated at this point compared to the pods and suites that Delta offers on its newer jets.

Sadly, Delta didn't decide to install its new suites product on this plane. If it's any consolation, the airline is planning to retire this fleet entirely by 2025, so it's only a few more years until this jet and biz seat is going to the boneyard.

Though the "bones" of the business-class product haven't changed, there are all-new finishes that are a noticeable step up from the worn leather you'll find on the non-retrofitted 767s.

Seriously, the cabin looks much sleeker and more inviting than before.

But it's not just the finishes. Each Delta One pod also has a new memory foam cushion which should help make it easier to get comfortable and fall asleep.

Another welcome addition to the reconfigured 767s is an espresso machine. Going forward, you'll be able to order espresso-based drinks when flying in Delta One on this plane.

As mentioned, other elements of the pods remain unchanged. The screens are still just 10.1 inches (but they are loaded with the latest inflight entertainment software).

The tray tables haven't gotten any larger, either.

The 26-seat Delta One cabin is outfitted in a staggered 1-2-1 configuration, meaning that some seats are better than others.

Solo flyers should definitely choose an odd-numbered window pod for the added privacy since the seat itself is flush with the window and further from the aisle.

Just be sure to avoid the window seats in row 6 since they have misaligned windows.

The new Premium Select cabin comes at the expense of economy seats.

The legacy configuration had 35 Comfort+ and 165 main cabin seats, while the 767-300s equipped with Premium Select sport just 21 Comfort+ seats and 151 main cabin ones. In total, the new configuration for the Boeing 767, internally referred to as “76K,” has 10 fewer seats on the plane.

These seats are identical to those in coach, except that they sport additional legroom and can be easily identified by their red-trimmed finish.

The armrests in the bulkhead row 30 are immovable, but otherwise, all the extra-legroom seats are identical.

You'll find the remaining 151 coach seats right behind the three rows of Comfort+.

The 2-3-2 configuration is one of the most comfortable you'll find on a wide-body jet. There's just one middle seat per row, so the odds of getting a window or aisle are much higher on this plane.

For one, there are power outlets located at each row: there's one for each pair of seats along the window, and two outlets for each of the three center seats. (In the legacy configuration, power outlets weren't available in coach.)

In addition to more juice for your devices, the cushions at each economy seat got a major improvement. Like the rest of the plane, they're now made of a much more comfortable memory foam padding that's noticeably thicker than every other coach seat I've tried in recent memory.

More enhancements bring the plane to the 21st century

It's no secret that Delta's legacy 767-300s are the most dated planes in its international fleet.

That changes with this reconfiguration progress. Instead of just installing Premium Select and calling it a day, Delta told TPG that it tried to modernize every aspect of the onboard experience on this jet.

The first thing you'll notice when boarding is a refreshed galley and entry area with the Delta logo emblazoned on a striking blue backdrop.

Once you're seated, it won't take long to appreciate the mood lighting that Delta added to the 767-300. With unique scenes for various phases of flight — including meal service, cruise, overnight and wake up. The carrier's goal is to use the lighting to help ease jetlag and boost comfort.

Another major improvement is the enhanced lavatories. Though the number of bathrooms doesn't change with the reconfiguration — two for biz and four for premium economy and coach — the finishes have been modernized with mood lighting, as well as foot pedals for touchless access to flushing the toilet and opening the garbage.

Delta didn't forget about its flight attendants either. The airline added two new jumpseats at the back galley to help in case of turbulence in the middle of the flight.

Previously, there were just two jumpseats in the back galley, so flight attendants would need to rush to the front of the plane to get seated should the captain instruct them to buckle up.

Now, if they're working in the back, there'll be room for two more.

Delta's first retrofitted Boeing 767-300 is now in service, and it's a welcome improvement compared to the legacy configuration.

The brand-new Premium Select cabin is great for those looking for a more exclusive product priced between coach and business.

While it's disappointing that the Delta One biz cabin didn't get a major product overhaul, the finishes have been updated with comfier (and visually appealing) cushions.

The same is true for the economy cabin. The plush memory foam cushions and power outlets at each row should make it easier to relax in the back.

Along with fancy mood lighting, a new welcome area and refreshed lavatories, Delta's reconfiguration program takes the 767 fleet into the 21st century.