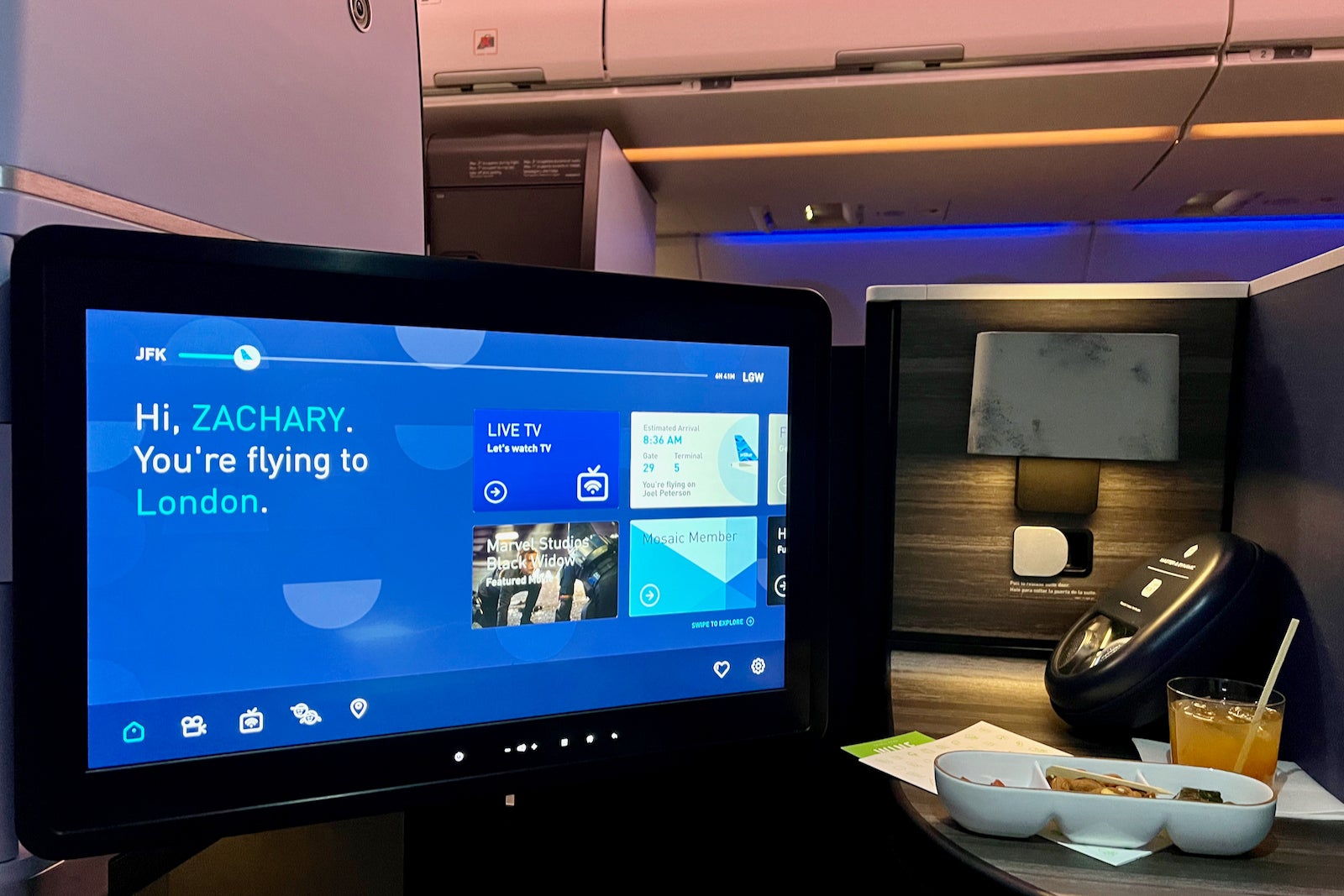 Despite the pandemic, it’s quite easy to crown a winner for the best new airline business-class product.

Sure, we’ve seen some recent innovations from the U.S. “Big 3” airlines. American recently launched a new cabin on its 787-8 Dreamliner. Delta continues to retrofit its existing long-haul fleet with Premium Select and refreshed biz seats, while United is charging ahead with its fleetwide Polaris rollout.

But while the incumbents are making iterative updates to their jets, JetBlue is busy disrupting the industry once again — this time on one of the world’s busiest routes.

And in doing so, it's taking home some hardware, as it's the winner of the 2021 TPG Award for the best new business-class cabin in the sky.

While the new flights are historic for the carrier, they’re also poised to give the competition a run for its money — and that starts from the minute you step onboard.

Unlike the incumbents, JetBlue isn’t flying a wide-body jet to London. Rather, it’s going with the single-aisle Airbus A321LR, or long-range.

With just 138 seats, this plane has a boutique feel, both in the Mint business-class cabin and “Core” economy cabins.

But it’s not necessarily the size of the plane or the number of passengers that's disrupting the status quo; it’s about the actual seats themselves, especially those in the pointy end of the cabin.

When JetBlue first unveiled its next-generation Mint cabin in February, the airline surprised observers by installing two separate business-class experiences: there’s the Mint Suite along with the Mint Studio.

Though the Suite itself is quite comfortable, the JetBlue product team really deserves kudos for what they did with the bulkhead Row 1.

Of course, the team could’ve just installed another row of Mint Suites, but they found themselves with an issue — what would they do with all the extra space in the first row?

Well, the solution — the JetBlue Mint Studio — is this year’s winner of the TPG Award for the best new airline business-class product.

The Studio is a mini-apartment in the sky. For one, the sleeping surface is the largest of any U.S. carrier. Additionally, thanks to a built-in mattress pad from Tuft & Needle (that's actually noticeable), it's quite comfortable, too.

Once you’re settled into the Studio and close the sliding door, it won’t be hard to catch some Zs.

There’s even a buddy seat for you to share with a friend or colleague. With a second tray table, you won’t even feel too cramped when eating or working side-by-side.

Other Studio enhancements include a folding closet with a coat hook and a shoe compartment, a larger 22-inch TV, additional storage compartments and an oversized footwell.

The innovation doesn't stop with the seat itself

The airline’s new partnership with Delicious Hospitality Group brings restaurant-quality, tapas-style meals to the business-class cabin — along with a wine list and cocktails that are shaken at your seat, a uniquely first-class touch.

Once in flight, you’ll receive some additional amenities as a Studio passenger, including pajamas, slippers and an essentials kit with playing cards, a lint roller, chapstick and more.

Aside from the product itself, JetBlue is also innovating on pricing. For one, round-trip Mint fares start at $1,999. Compared to the $10,000 that some airlines charged on the New York to London route before the pandemic, the transatlantic Mint experience is doing what it first did in the transcontinental market — undercutting the competition on price yet doing so with a better product.

Once you’re booked in Mint, you can upgrade to a Studio seat for $299. Of course, that pricing might not be worth it on a short redeye to Europe, but it could definitely make sense on the long return journey.

Plus, the carrier’s Mosaic elite members can redeem 12,500 TrueBlue points for the seat upgrade, a lucrative 2.4 cent per point redemption value.

Between the industry-leading hard product, incredible meal service and attractive pricing, JetBlue hit a home run with its latest Mint cabin. Eight years since first unveiling the original Mint product, the airline continues to outdo itself — this time, in another continent.

For that, JetBlue deserves the award for the best new business-class hard product.