Inside Delta's retrofitted Airbus A330 with fancy cabin upgrades 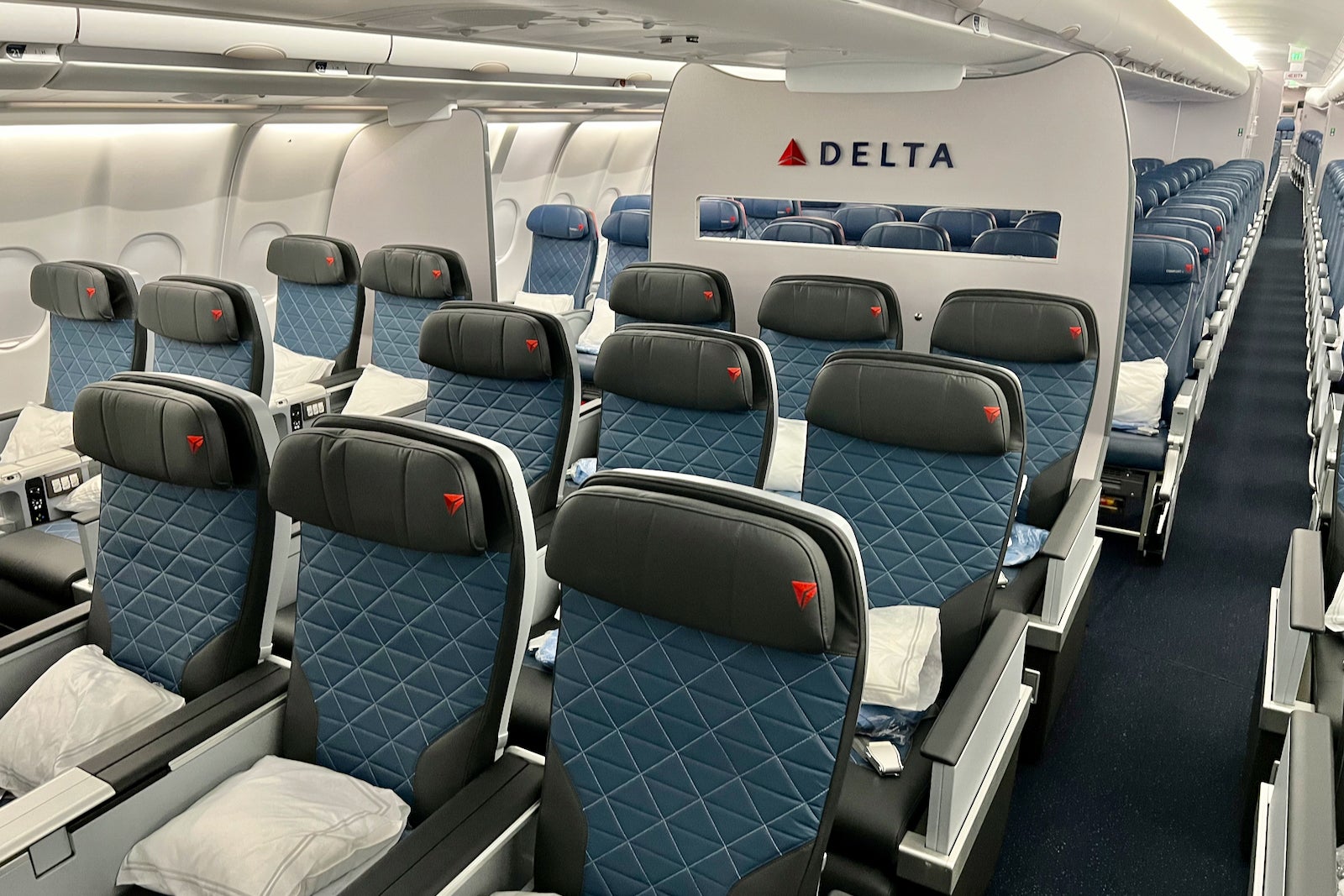 When you're ready to cross the pond again, you might find yourself on a newly retrofitted Delta jet.

Earlier this year, the Atlanta-based carrier embarked on a two-year-long cabin modification program for the backbone of its transatlantic fleet, its 42 Airbus A330-200 and -300s. The onboard upgrades include a new premium economy cabin, along with some other passenger-friendly enhancements to the biz and coach cabins. (Delta's newer A330-900neos already feature a premium economy cabin and aren't included in this retrofit program.)

The A330 retrofits are the second major upgrade coming to Delta's wide-body fleet in the coming months, joining a similar project for the airline's Boeing 767-300s.

Thus far, only a handful of Airbus A330s have been retrofitted, with fleetwide completion still on track for mid-2022. Ever since the first A330 was upgraded this summer, I've been eager to see the improvements in person.

That opportunity came on Tuesday, Oct. 12, when an Airbus A330-300, registered N829NW, was parked in Atlanta overnight between long-haul flights. With some aircraft downtime, I quickly flew down to the carrier's mega-hub for an exclusive one-hour tour.

Premium Select shines on the A330

Delta's take on premium economy, Premium Select, is now being added to the Airbus A330-200 and -300 fleets.

You'll find the new Premium Select cabin spread across three rows, 20 to 22, in a 2-3-2 configuration.

The seats themselves will likely look familiar to anyone who's flown in Delta's premium economy cabin before. Delta uses the same hard product across its fleet, though this 21-seat layout is one of the most intimate and private in the sky.

Plus, with curtains separating the cabin from biz and a bulkhead behind the last row, flying in Premium Select on the Airbus A330 should offer a much quieter environment than in coach. Additionally, with just one middle seat per row, odds are that you'll end up in a window or aisle.

The premium economy recliners largely resemble the airline's domestic first-class product, with a few additional bells and whistles for added comfort during a long-haul flight.

According to Ashley Garris, Delta's manager of onboard brand experience, "the approach of one-size-fits-all doesn't really work when people are traveling. Customers do want different things in their experience, and Delta Premium Select gives them another option... a nice comfortable experience that's still elevated and still truly Delta."

Garris continued to describe many of the additional amenities when booking premium economy.

Each seat — including those at the bulkhead row 20 — features a leg rest and footrest. With seven inches of recline, I had no trouble getting comfortable for a few minutes during my tour.

There's a storage compartment built into the armrest of each seat, perfect for keeping a small iPad, cellphone or book. In addition, you'll find a water bottle holder right next to the manual seat controls.

Seats measure 18.5 inches wide and offer 38 inches of pitch, and each offers a universal power outlet and USB-A port.

Each Premium Select recliner is equipped with a 13.3-inch high-definition seat-back monitor powered by Delta Studio, the airline's inflight entertainment software. The monitor swivels up and down, giving you a perfect viewing angle regardless of whether you're reclined.

All in all, the Premium Select cabin is a welcome upgrade to the A330 fleet. Priced between coach and Delta One, it could definitely make sense to splurge for the bump on shorter international routes.

Coach is getting more comfortable

The new Premium Select cabin is largely coming at the expense of extra-legroom Comfort+ seats. In the previous cabin configuration, Delta had 40 Comfort+ seats on the A330-300. That's down to just 24 after the retrofits.

Including premium economy, the number of premium seats on the aircraft isn't decreasing, but if you're a Medallion entitled to complimentary Comfort+ upgrades, this change in distribution might sting.

Asked about the move, Garris explained that "we've had great feedback [about Premium Select], and that's why we're committed to rolling out four cabins on all our international widebodies."

Either way, there's some welcome news for non-elites in coach. From nose to tail, the airline installed new seat cushions in all cabins, and they're especially noticeable in the economy section.

These new cushions are much more comfortable than the slimline seats you’ll find on many other airlines. While I only had a few minutes to put it to the test, it was immediately clear that there was much more padding at each seat.

In fact, these are similar seat cushions to the ones you'll now find on the retrofitted Boeing 767-300 — hopefully, this means Delta will continue investing in the economy product, instead of copying its competitors' transition to slimline seats.

There's juice for everyone

In addition to upgraded seat cushions, Delta is giving every economy passenger access to a power port. Previously, most coach seats only had access to USB charging ports.

In the main cabin, there's now one power outlet for each of two seats along the sides of the plane and two outlets in the center section of each row. Plus, each seat has access to a USB-A port located underneath the nine-inch seat-back screen.

These universal outlets accept plugs from most countries.

Relaxing in Delta One will be better than ever

Delta's Airbus A330-200s and -300s don't feature the airline's top-notch Delta One Suites cabin in the pointy end of the plane.

Instead, they're outfitted with reverse herringbone seats, arranged in a 1-2-1 configuration with direct aisle access for each passenger. Though these pods aren't as private as the Suites on the A350 and A330-900neo, they're still quite comfortable and much better than the outdated product you'll find on the 767s.

While the A330 retrofit program leaves the "bones" of the cabin intact, the airline added new seat cushions to the business-class pods. They've been updated in the latest Delta pattern and will offer more padding for relaxing and sleeping.

Combined with the Westin Heavenly bedding that Delta provisions for each biz passenger, catching some shut-eye in Delta One on the A330 shouldn't be too hard.

Additionally, when it's time to wake up in Delta One, you'll enjoy a revamped selection of caffeinated drinks thanks to the new espresso machine the airline installed during the retrofits.

In addition to new amenities across all four of the plane's cabins, several other enhancements were packaged into the latest retrofit program.

Perhaps most noticeable is the LED mood lights that Delta added to the A330. With unique scenes for various phases of flight — including meal service, cruise, overnight and wake up — the carrier's goal is to use the lighting to help ease jetlag and boost comfort. I only had a few minutes to play with the overhead lights, but the carrier confirmed that the A330 will have the same color spectrum as what you'll find on the retrofitted Boeing 767-300.

Additionally, the carrier revamped all eight lavatories on this jet. They now all feature one-touch sinks, along with modernized wall paneling and flooring.

And finally, as you enter and exit the plane, your eyes may be drawn to the new welcome area next to Door 2L.

The blue diamond-shaped pattern on the wall helps make the shiny metal Delta logo stand out.

From the moment you step on board, you'll instantly notice the slew of improvements that Delta installed on its retrofitted Airbus A330s.

Headlining the interior upgrade program is the new Premium Select cabin. With 21 recliners that feature leg rests and footrests, premium economy is bound to be a popular option for those looking for more comfort without breaking the bank for a lie-flat upgrade.

Coach seats and Delta One pods get new cushions, providing more comfort when it's time to sleep or cozy up with a movie.

All in all, along with the other interior enhancements like refreshed lavatories and new mood lighting, you're bound to enjoy your next flight on Delta's Airbus A330 as much as I enjoyed my tour.