First look: How JetBlue's first A321LR stacks up against the Mint-equipped neo 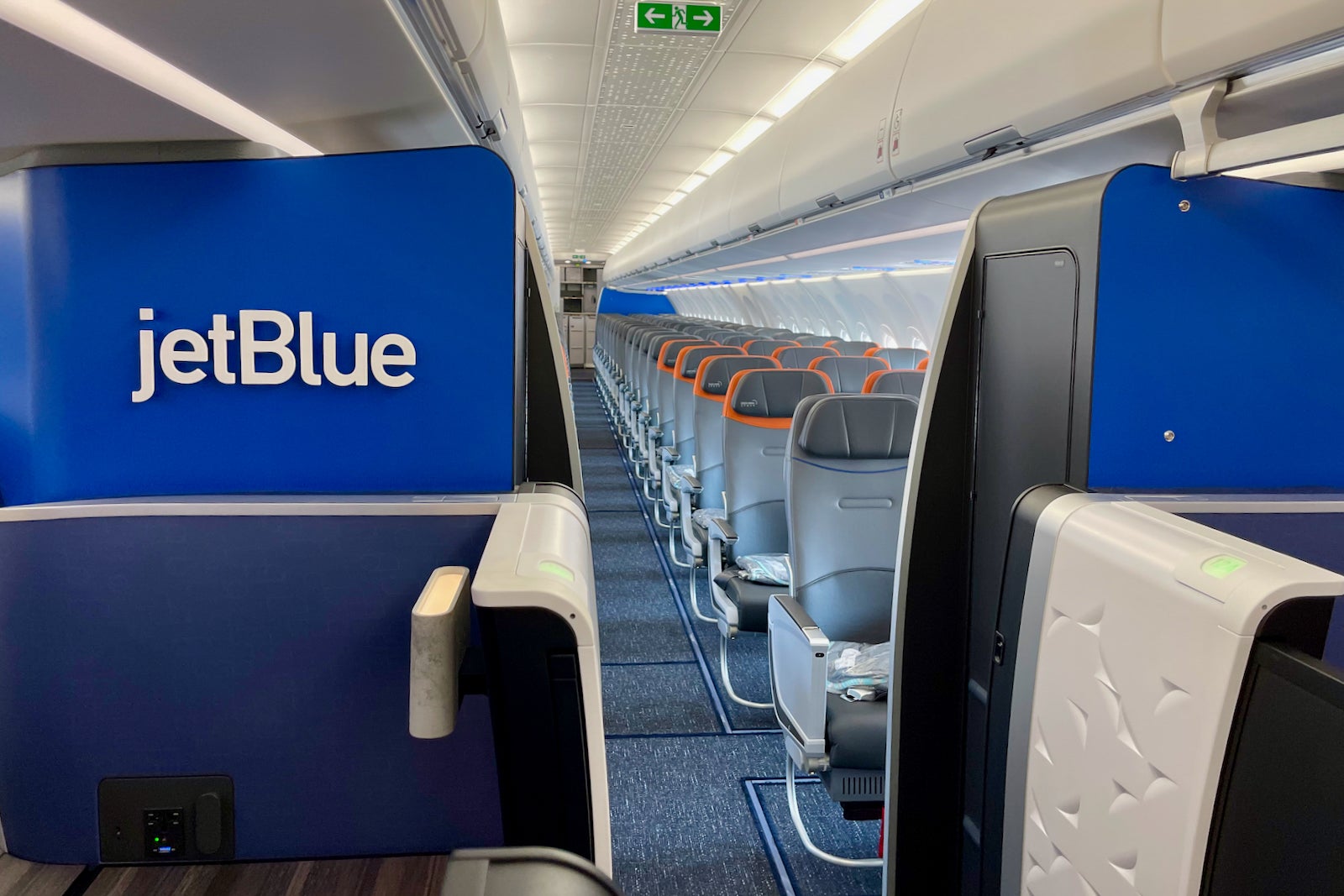 JetBlue is on a tear.

Despite the pandemic, 2021 has been a blockbuster year for the New York-based airline.

It started in January with the unveiling of the carrier’s new domestic workhorse, the modern Airbus A220. In February, JetBlue took delivery of its first aircraft with a new Mint business-class cabin, the Airbus A321LD, designed to fly premium transcontinental hops between New York and Los Angeles.

Now, the carrier is gearing up for perhaps its biggest launch yet: transatlantic flights between the East Coast and London. To hop the pond, JetBlue will deploy its newest jet: the Airbus A321LR, or “long range.”

On Wednesday, TPG got a first look at JetBlue’s first A321LR, registered N4022J, which just arrived in late April from the Airbus production facility in Hamburg, Germany.

Though the A321LR features the same Mint biz and coach seats that you’ll find on the “LD,” there are a number of notable differences between the two planes.

The first thing you’ll notice about JetBlue’s newest jet, the A321LR, is the size of the business-class cabin.

For the London routes, JetBlue is banking on carrying a high proportion of business and deep-pocketed leisure travelers.

To that end, the carrier outfitted the A321LR with a whopping 24 Mint business-class suites, two of which are dubbed Studios, located at the bulkhead.

In the Mint Studio, you’ll find additional storage space, a buddy seat, a second tray table and a larger, 22-inch personal television. You can read more about the Mint Studio product in my full review from the inaugural A321LD flight.

Once you walk past the two Studios, you’ll find an 11-row Mint suite cabin, which spans all the way to the middle of the plane’s fuselage.

Pictures alone can’t describe how large the Mint cabin is — it’ll be interesting to see how long it takes to provide meal service on this single-aisle jet during the short red-eye to London.

The A321LR is also outfitted with 114 coach seats, spread across 19 rows in a single-cabin 3-3 configuration.

The first row of coach is a bulkhead. Though it’s not sold as extra-legroom Even More Space, you’ll find some additional legroom here. Just note that all bags will need to be stored in the overhead during taxi, takeoff and landing. Additionally, the armrests are fixed, and TVs are built into the wall in front of you.

The next four rows are labeled as Even More Space, offering an additional 3 to 6 inches of legroom.

The rest of the plane is JetBlue’s standard “Core” product, but I’d avoid Row 23 due to missing windows.

Despite having fewer seats, you’ll still find four lavatories on the A321LR, the same as the A321LD.

What's different, however, is their location: there are two restrooms at the front of the Mint cabin, as well as two at the rear behind coach on the A321LR.

With just one aisle, getting to and from the bathroom during meal service could require a game of human Tetris.

Plus, flight attendants likely won’t appreciate when lines form during meal service, because the lavatories are located in the forward and rear galleys.

JetBlue’s newest A321s feature a walk-up pantry, with free inflight snacks. The A321LR is no exception, but like the cabin itself, the pantry is intimate.

Once the aisle is clear and the seatbelt sign is off, you can head to the rear of the aircraft to grab a snack or can of soda. It just remains to be seen if the pantry will actually be open by the time JetBlue inaugurates the A321LR. For now, all pantries remain closed fleetwide as an anti-coronavirus measure.

The A321LR is JetBlue’s first plane to feature a crew rest.

Until now, the carrier hasn’t needed one for its domestic and short-haul international network. But now that it’ll operate transatlantic flights, JetBlue needs to provide a space for pilots and flight attendants to rest between shifts.

In Mint, suite 12A is reserved for relief pilots. There will be a thick curtain around the seat to help filter out noise and ambient light.

In core, seats A through C in the last row — Row 31 — will be reserved for flight attendants.

JetBlue’s A321LR is also the first jet in the world to feature Airbus’ new Airspace cabin.

The Airspace cabin is also outfitted with new, larger overhead bins that should hopefully make gate-checked bags a thing of the past.

Additionally, the fuselage along the sidewalls has been redesigned for additional space at shoulder level. I, unfortunately, wasn’t able to put this to the test during our 30-minute first-look tour.

Savvy flyers will notice a few other nifty enhancements on the A321LR.

For one, every coach seat is outfitted with in-seat power, as well as a newer USB-C port. Most existing JetBlue jets feature a legacy USB-A port instead of the newer USB-C standard, which is used with the latest devices.

Another enhancement on the A321LR is the swanky passenger service unit above coach seats. Though you’ll find all the traditional buttons (think: reading light, air vents and flight attendants call button), it’s more modernized than the legacy ones.

Finally, the window shades on the A321LR are larger than those on the A321LD. I didn’t have time to measure the window itself, but it also appeared to be about the same size as those on JetBlue’s other Airbus A321 jets.

Despite the pandemic, 2021 is a big year for JetBlue. In addition to hopping the pond for the first time in its history, the carrier introduced three brand-new aircraft types.

Of course, the devil is in the details: can JetBlue pull off its signature inflight service, both in Mint and in coach, during a six-hour red-eye jaunt between New York and London with just a single-aisle plane?

Only time will tell, literally and figuratively.