Take a look inside JetBlue's swanky new Airbus A220 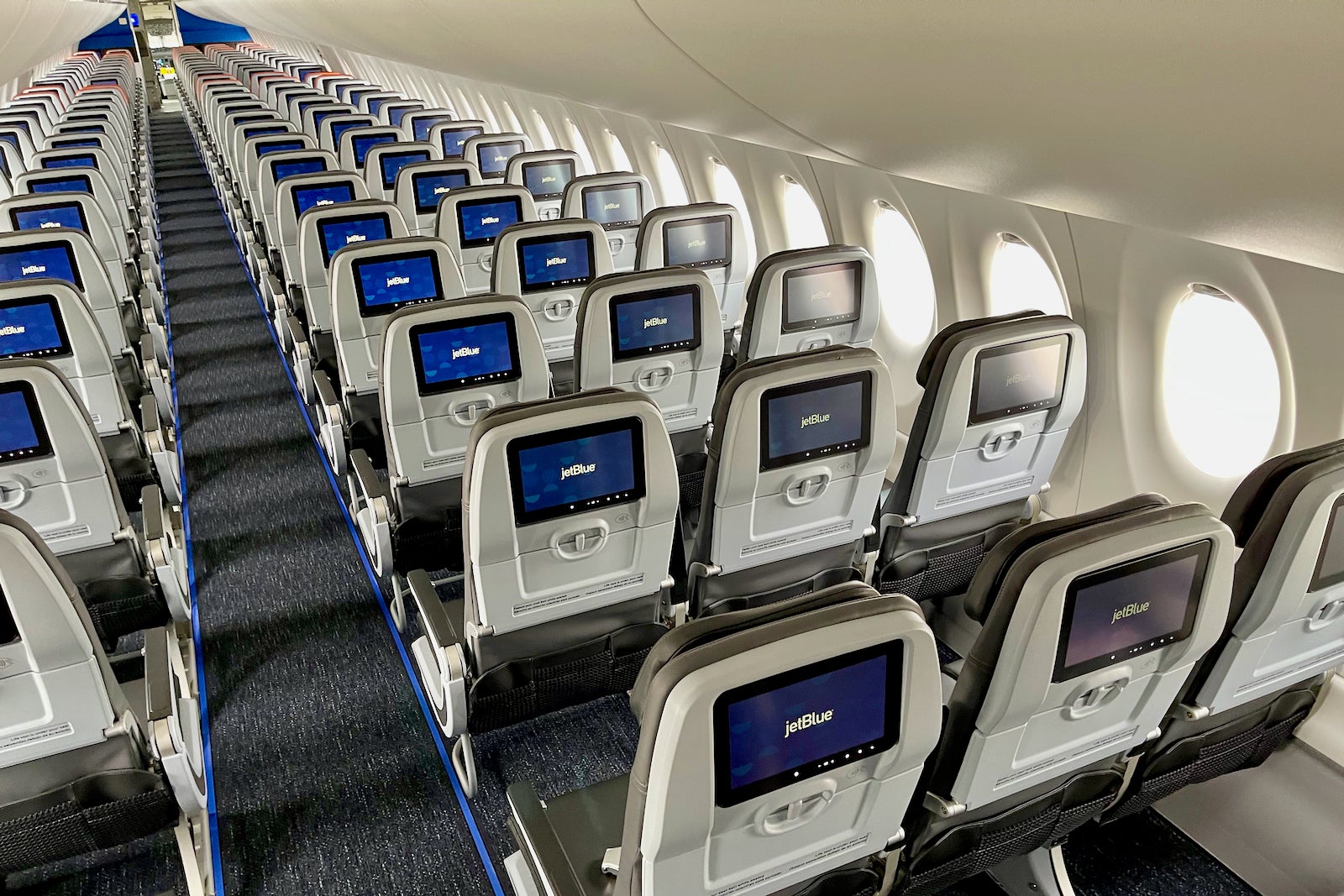 Take a look inside JetBlue's swanky new Airbus A220
This post contains references to products from one or more of our advertisers. We may receive compensation when you click on links to those products. Terms apply to the offers listed on this page. For an explanation of our Advertising Policy, visit this page.

JetBlue is starting the new year with a treat for domestic flyers — welcoming the first of 70 Airbus A220s to the fleet.

Set to replace the aging Embraer 190s, these fuel-efficient, flyer-friendly aircraft are slated to become the future of JetBlue's domestic backbone along with the existing fleet of over 200 Airbus A320s and A321s.

On Tuesday, JetBlue unveiled the plane's interior for the first time. Long story short, there's lots to love, but let's take a look inside to see why.

The Airbus A220 (formerly known as the Bombardier C-Series) quickly became a fan-favorite for its spacious 2-3 seating configuration.

JetBlue's Airbus A220-300 is outfitted in an all-coach configuration with 140 seats spread across 28 rows.

The 2-3 arrangement affords flyers with a better shot at avoiding the dreaded middle seat compared to a traditional 3-3 configuration on the Airbus A320 or A321. For JetBlue, however, the A220 is replacing the Embraer 190, which sports a 2-2 configuration without any middle seats.

Those who end up sitting in the middle on the A220 will likely miss the E190. Everyone else has a lot to look forward to.

As for its new Airbus A321neo, JetBlue chose the Collins Meridian seat for the "bones" of the seat, but customized the rest of the experience.

The seats themselves are quite comfortable, especially for shorter segments, like the plane's inaugural route from Boston (BOS) to Fort Lauderdale (FLL) in mid-June. JetBlue has teased that the A220 could fly on some coast-to-coast hops, but it remains to be seen which routes it might fly.

The 28 rows are split with 30 Even More Space seats and the remaining 110 as standard Core seats. Roughly 27% of the A220's seats are dedicated to extra-legroom seating, a roughly 10% boost compared to the soon-to-be-retired Embraer 190.

Even More Space seats span the first four rows of the aircraft, as well as the exit row 12 and row 13. Seat pitch is 35 inches, and all extra-legroom seats recline, even those in the exit row.

Coach is outfitted with an industry-leading 32 inches of pitch. Just be sure not to select the last row since it doesn't recline.

At 18.6 inches wide, the A220 sports the widest seat across all of JetBlue's economy cabins — and it was noticeable. I had plenty of room to wiggle around when sitting.

One of the most noticeable innovations in the passenger experience on the A220, according to Mariya Stoyanova, director of product development, is the added seatback cushioning and headrest padding made from a new, softer vegan leather material, dubbed Ultraleather. I, unfortunately, couldn't put it to the test during my 30-minute tour, but I'll have a deeper look after the plane's inaugural flight.

Top-notch onboard entertainment and amenities

JetBlue has long offered one of the best onboard experiences in the domestic skies, and the A220 is poised to become the most advanced, tech-forward jet in the airline's fleet.

Each seat is outfitted with a 10.1-inch touchscreen seatback monitor, perfect for watching live DirecTV or on-demand content from HBO, Showtime and more.

Aside from the content itself, the screen's 1080p resolution is easily the sharpest in the fleet.

Some of the other nifty inflight entertainment features include support for picture-in-picture, a new 3D flight map and the ability to pair the screen to a phone to use as a remote or game controller.

Each seat supports near-field communication (NFC), which can enable contactless payments for in-seat purchases. JetBlue won't be activating the readers just yet, according to Stoyanova, who told TPG that the carrier hasn't finalized plans for using the NFC readers.

In addition to the personal entertainment monitors, every JetBlue flight offers free gate-to-gate Wi-Fi, including those operated by the A220.

The carrier opted to install the faster ViaSat 2 satellite receivers onboard, which boosts internet coverage, speed and reliability compared to the older JetBlue planes.

As for the seat's amenities, the tray table measures 16.5 inches wide and 8.5 inches long — roughly industry standard for the A220.

JetBlue added its customized seat-back storage holders to the A220, which feature three individual mesh pockets, each capable of holding a water bottle and other loose items.

Finally, each row is equipped with shared power outlets. There's one outlet for every two seats on the port side and two outlets for every three seats on the starboard side.

In addition to a universal power outlet, there's also a USB-C port at each outlet, perfect for charging the latest devices like the iPhone 12 Pro.

Though outlets are shared, each monitor has a standard USB-A port to power older handheld devices.

Let's start with the bad news for aviation enthusiasts. JetBlue didn't install windows in the A220 lavatories.

There are three bathrooms on JetBlue's A220, one larger one at the front, and two significantly tighter ones at the rear of the aircraft.

None feature windows like you'll find on Delta's A220s, but they do sport a subway-tile mosaic in a nod to the carrier's New York roots.

Speaking of windows, one of the many reasons flyers love the A220 is its large windows. In JetBlue's configuration, only rows 12 and 13 have misaligned windows. The rest are ready for the perfect Wing View Wednesday shot.

Another popular A220 feature is the large overhead bins, which should help reduce the number of gate-checked carry-on bags.

I'd avoid sitting at the bulkhead due to the restricted legroom. However, if you end up in row 1 and you can read Morse code, you'll have plenty of time to decipher the hidden message emblazoned over the bulkheads. (Spoiler alert: it spells out JetBlue.)

Though the plane is a big improvement for passengers, the cabin crew might not be as excited. Both the forward and rear galleys are noticeably smaller and tighter than on the larger Airbus A320 and A321.

The A220 is just the beginning

The A220 is the latest chapter in JetBlue's fleet modernization strategy. The New York-based carrier plans to take delivery of seven new planes by year's end, representing just 10% of its entire A220 order book.

Except for the added middle seat, the aircraft is a notable improvement compared to the Embraer 190 it replaces. With wider seats, oversized windows, larger overhead bins and a slew of tech updates, JetBlue's A220 is sure to impress flyers.

But JetBlue isn't stopping there; 2021 is set to be a massive year for the airline.

After the A220 inaugural, all eyes turn across the pond to London, where JetBlue plans to land for the first time later this year. To make the transatlantic journey, the carrier will take delivery of brand-new Airbus A321LRs, featuring a redesigned Mint business-class cabin.

For now, though, some lucky domestic flyers will have a brand-new jet waiting for them.