Articles
David Slotnick is a senior aviation business reporter at TPG. He covers anything and everything to do with the business of running an airline.
Follow
May 19, 2021
•
9 min read 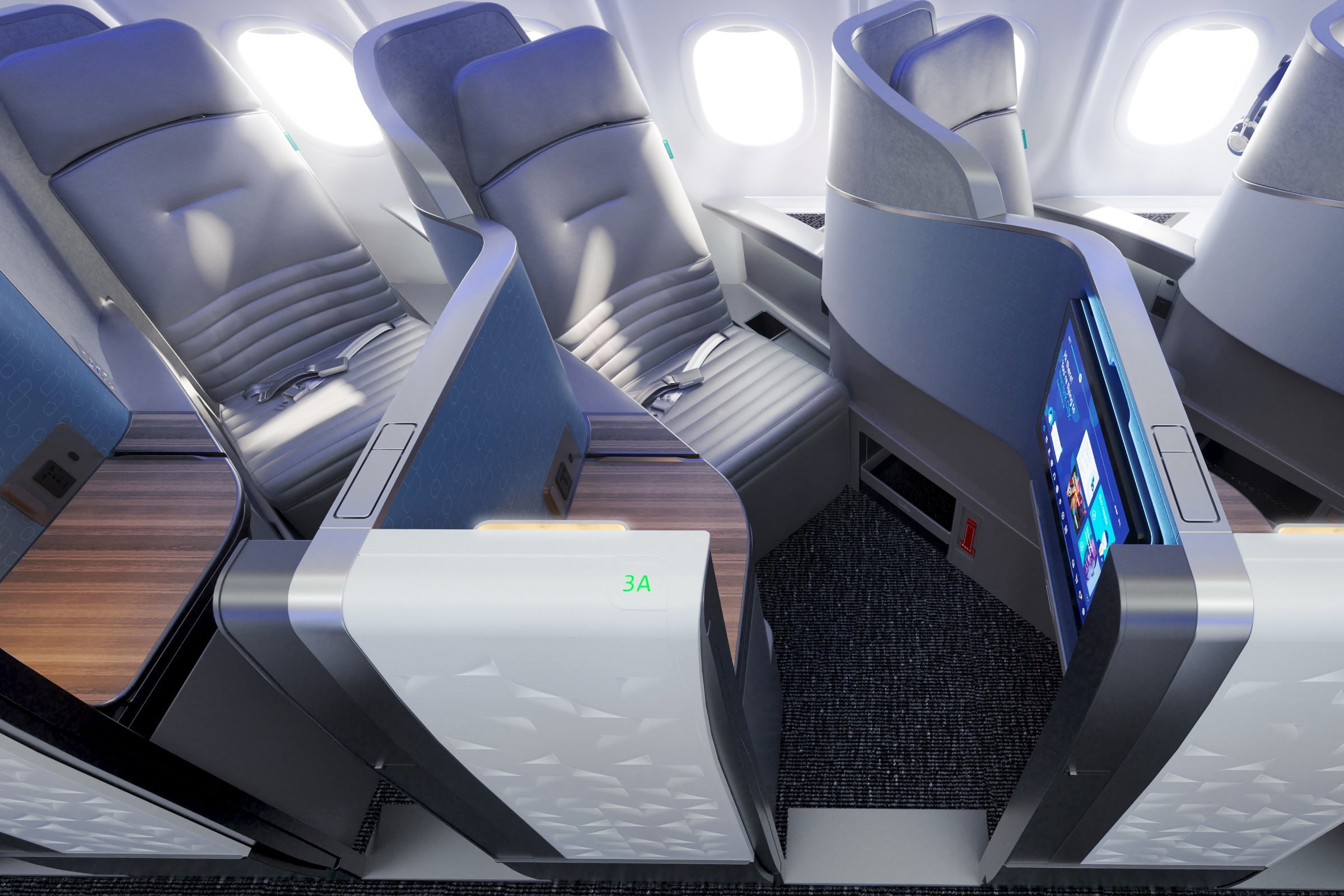 JetBlue announces long-awaited flights to London
This post contains references to products from one or more of our advertisers. We may receive compensation when you click on links to those products. Terms apply to the offers listed on this page. For an explanation of our Advertising Policy, visit this page.

/strong> This story was updated to include details of the Plaza Premium lounges.

New York-based JetBlue on Wednesday announced the long-awaited details of its planned service between the U.S. East Coast and London.

JetBlue will begin flying from New York-JFK Airport to London's Heathrow on Aug. 11, and to London's Gatwick airport on Sept. 29. Both routes go on sale today. Currently, COVID-related travel restrictions remain in place for travel between the U.S. and the U.K., though there's increasing hope they could ease by summer.

The airline's highly anticipated service between Boston Logan Airport and London, however, is delayed. Service on that route is now set to start in summer 2022.

That's a relatively late departure from New York, but it also means a shorter wait between landing and hotel check-in times for jetlagged vacationers.

Meanwhile, the flight to Gatwick, JetBlue Flight 43, is scheduled to depart daily at 7:50 p.m., arriving at 7:55 a.m., offering an earlier arrival for those looking to attend meetings or make use of a full first day on the ground. The return departs Gatwick at noon, arriving to JFK at 3:33 p.m.

JetBlue will operate out of Terminal 2 at Heathrow, and the North terminal at Gatwick.

Times for next year's Boston flights were not announced. JetBlue's planned London service from its New England hub was pushed back because of pandemic-related aircraft delivery delays, JetBlue's head of revenue and planning Scott Laurence told TPG.

"As we went through the COVID crisis, we tried to make a number of decisions that would allow us to be responsible in terms of our cash balance and our balance sheet," Laurence said. Part of those efforts included deferring deliveries of some aircraft, including the brand new Airbus A321LRs that JetBlue plans to use on the London routes.

"As we move forward through this year we're only going to be taking three [321LR] aircraft, and that supports two trans-Atlantic routes," he said. "We wanted to give customers the choice between Heathrow and Gatwick, we wanted to build the appropriate base at Gatwick as we went forward, and so we focused our service on New York. It's the right place for us to recover and the right place for us to launch."

"But Boston is definitely coming, we're excited about that for summer 2022," he added.

With the new transatlantic service, JetBlue is entering a heavily served, hyper-competitive — and valuable — market dominated by entrenched carriers such as American and British Airways (in a joint venture), Delta and Virgin Atlantic (also in a joint venture), and United.

While crossing the ocean has been historically treacherous for low-cost carriers, JetBlue is embracing the higher-yielding premium service model that is crucial to offsetting the high costs of long-haul flying.

Those A321LR aircraft will feature JetBlue's brand new Mint Suite and Mint Studio business class products, a significant upgrade over the already stellar Mint product flying on JetBlue's transcontinental routes. The new products were recently introduced on JetBlue's A321neo, which will begin flying between New York and Los Angeles (LAX) this summer — you can check out a full tour here.

The 22 Mint Suites feature seats in a 1-1 Herringbone layout, with seats angled slightly in towards the aisle. Each suite is fully enclosed and has a sliding door that closes all the way, and features a 17-inch screen, plenty of storage spaces, and an integrated wireless phone charger.

The two Mint Studios at the front of the cabin have a ton of extra space, two windows, a belted side seat (so a travel companion can come and chat, or so you can move around a bit), and a 22-inch screen. The Studios will have a price premium over the Suite.

Regardless of which type of seat, Mint passengers are in for a treat — all of the seats have an integrated cooling mattress-topper from Tuft & Needle, offering a good night's sleep, along with premium meals and drinks.

The experience in economy — or "Core," as JetBlue has branded it — will also feature a premium experience over the airline's domestic product, the carrier says.

The 117 Core seats — 24 of which are "Even More Space" extra legroom seats — all feature adjustable headrests with what the airline describes as "shoulder-friendly sidewalls." Core seats feature 10.1-inch screens, USB and standard AC power ports, and organized seat pockets.

Passengers in every cabin have access to free high-speed Wi-Fi and live TV.

Passengers can use the seat-back screens to order a custom meal, with a choice of one of three mains, which feature a protein or vegetable and a base like rice, and two out of three hot and cold side options.

For lunch or dinner, passengers choose a main and base:

Along with two of the following three sides:

As part of the launch, JetBlue announced introductory fares for the New York-London flights, giving a sense of what pricing will normally look like.

Core pricing will start at $599 roundtrip from New York to London — a competitive fare, though nowhere near as low as could be found pre-pandemic, when pricing pressure exerted by Norwegian Airlines periodically drove the lowest coach fares below the $400 mark. Mint, meanwhile, will start at $1,979 roundtrip. Although transatlantic pricing has historically been possible to find for under $2,000 roundtrip, it's a rarity. At press time, the cheapest available nonstop in business class from New York to London was over $2,500 roundtrip — and that's a fairly low price, historically.

For Londoners looking to fly to the States, however, the introductory business class prices are stellar.

It's not immediately clear what the normal pricing will be. However, during a late-April call with investors, Laurence said the airline was looking to disrupt the trans-Atlantic business class market by offering a more affordable price to travelers paying their own way, rather than the high prices which have historically been paid by travelers' expense accounts.

It was a business model he reiterated to TPG this week.

More: Vaccinated Americans are raring to travel, survey shows, and are booking up summer vacations

"If you look at the published fares that have historically been there and where they've been, I think they're frankly extortionate," he said. "The concept here is to disrupt with people that are paying with their own money," he went on, "the concept of the best experience at the lowest price."

"We can make sure that the customers see some level of value and they can actually afford to pay out of their own pocket," he added.

One thing conspicuously absent from JetBlue's announcement: any information about lounge access for business-class passengers.

At the moment, there is no lounge access available. But there may be something in place by the time the flights actually launch.

"We're working through the details right now," Laurence told TPG. "While we don't have anything to announce with this, I will tell you that it's our intention to make sure that we're competitive across the board."

"We're finalizing it as we speak," he said.

Notably, both London airports have Priority Pass lounges: the Plaza Premium Lounge at Heathrow, and the Club Aspire Lounge at Gatwick. That latter is temporarily closed due to the pandemic, though it's scheduled to reopen on May 21, according to Priority Pass. Passengers flying into Heathrow can also access the Plaza Premium Arrivals Lounge with Priority Pass, although it's also temporarily closed due to the pandemic.

While there have been reports that Plaza Premium is removing some of its locations from the Priority Pass program, there is no word as to whether the Heathrow locations are among those on the chopping block. The Arrivals lounge only joined the Priority Pass network in 2020.

There are currently no lounge options in JetBlue's Terminal 5 at JFK.

Editor's note: This story was updated to include details of the Plaza Premium lounges.

Related stories
Chasing American Airlines elite status? Here are 14 ways to earn Loyalty Points
Fly to Greece from multiple US cities for less than $700
American Airlines restores free 24-hour hold option
Holiday airfare is rising: What to know if you haven’t booked yet
Editorial disclaimer: Opinions expressed here are the author’s alone, not those of any bank, credit card issuer, airline or hotel chain, and have not been reviewed, approved or otherwise endorsed by any of these entities.