It's Really Happening: JetBlue to Fly Between Boston/NYC and London 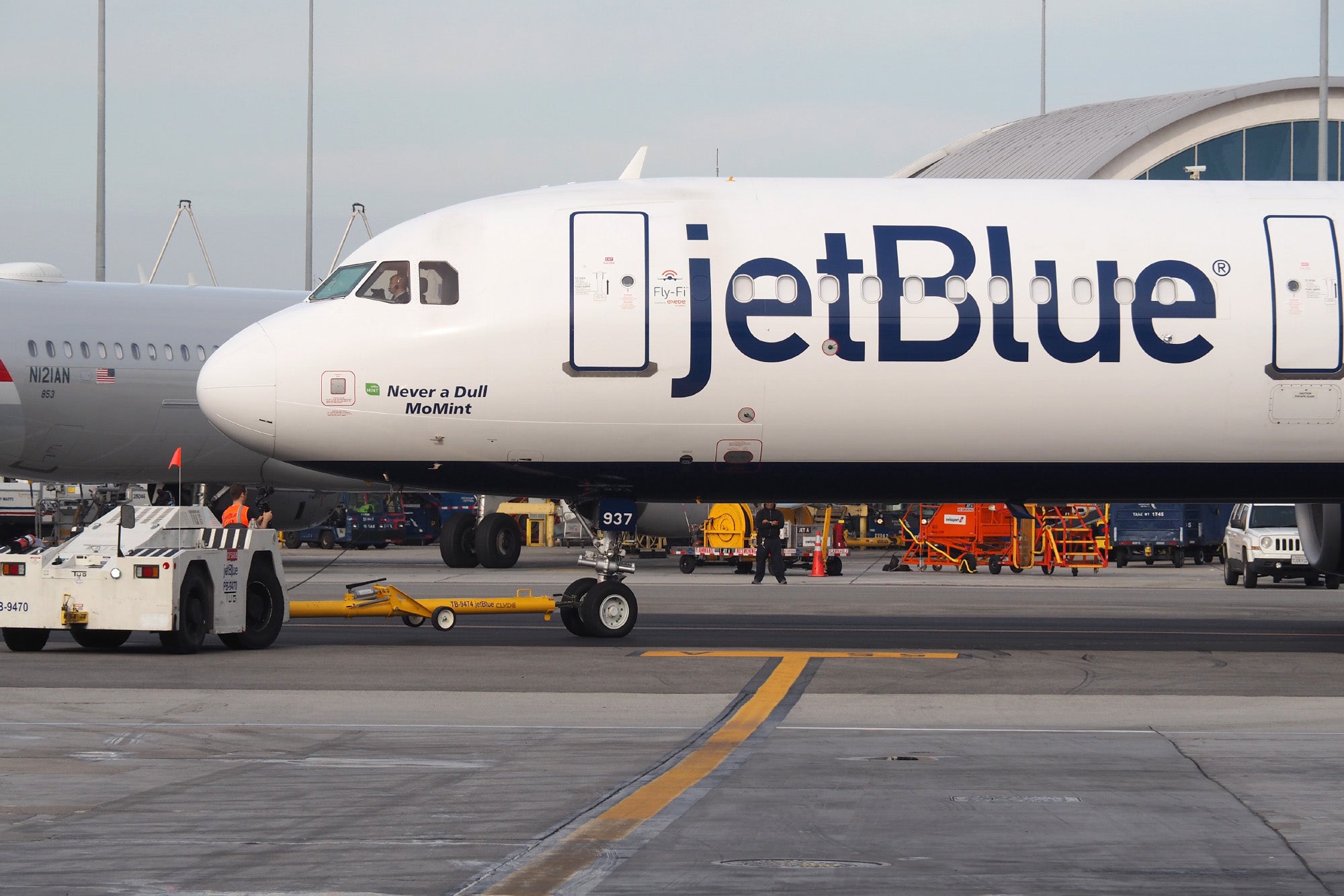 It's Really Happening: JetBlue to Fly Between Boston/NYC and London
This post contains references to products from one or more of our advertisers. We may receive compensation when you click on links to those products. Terms apply to the offers listed on this page. For an explanation of our Advertising Policy, visit this page.

The wait for JetBlue transatlantic flights is finally over! Or, depending on how you look at it, it's only just begun ....

Come 2021, JetBlue will begin flying between the East Coast and Europe in what's arguably the carrier's most significant announcement — aside from the launch of Mint, perhaps — since it first began operations some 20 years ago.

JetBlue hosted an event at its Long Island City, New York, headquarters to celebrate the launch today. I also had a chance this week to chat with the carrier's CEO, Robin Hayes, who shared some (light) details about the company's plans for the next decade and beyond, starting with the new flights between Boston (BOS) and New York-JFK and a to-be-named airport in London on an Airbus A321LR.

First, I asked why JetBlue picked London as its first transatlantic destination. With Brexit looming, the UK's absurdly high taxes and fees and recent struggles by Norwegian and Primera Air — which bet big on the US-London market and failed — it might not seem like the ideal time to introduce service on that route.

Hayes didn't seem even a little bit concerned, saying: "It’s the largest market that we don’t serve, out of both New York and Boston. It’s also a market that suffers very, very high fares, particularly in premium, so it is ripe for the JetBlue treatment of coming in and offering a much lower fare and a much better product and service to go with it."

As for the timing, Hayes explained: "2021 is really driven by the availability of the A321neo long-range airplane with Airbus. We are initially converting 13 of our deliveries from 2021 into long-range. We also have to get ETOPS certification concluded by then as well."

While even bargain-basement fares couldn't save Primera, Hayes is counting on JetBlue's reputation to help it succeed. That's something low-cost carriers have struggled to build in a climate of operational issues and dizzying fare wars.

"We are an established airline," Hayes said. "We have an extremely strong presence in both New York and Boston. We have a very loyal customer base. We see, time and time again, JetBlue going into new markets and being successful because of our ability to offer a great product and lower fares. You don’t have to choose between great service and competitive fares — JetBlue brings you both."

There are plenty of established airlines already on those routes.

JetBlue would become the seventh airline to fly between New York and London, competing with the 28 daily flights that already exist.

American Airlines and its partner British Airways dominate with 48% of the roughly 60,000 weekly seats, according an analysis of Diio Mi schedule data by airline expert Seth Kaplan.

The Oneworld alliance also controls half of the 15,000 weekly seats between Boston and London.

Hayes knows the competition well. Before joining JetBlue a decade ago, he was the British Airways executive in charge of operations in North and South America, though BA's market share has shifted drastically since then.

Even though JetBlue's strong route network could funnel transatlantic passengers through Boston and New York, Hayes isn't counting on connecting traffic in order for the new flights to be a success.

"Our networks both in New York and Boston are strong, so I’m sure we’ll have some connectivity, but the business case is always predicated on point-to-point," he said. "Eighty five to 90% of our traffic is point-to-point, and when we look at London, it is a huge market but it’s constrained in premium by very high fares. So the ability to drastically cut the fare, offer a superior product and stimulate the market is a great opportunity to us."

If customers do want to connect from elsewhere in the US, there currently are plenty of options, including these nonstop flights through Boston:

And these through JFK:

As for other US cities? The Airbus A321LR has a range of 4,600 miles, and while JetBlue's other major East Coast markets of Orlando (MCO) and Fort Lauderdale (FLL) technically both fall within that limitation, their point-to-point distance of roughly 4,300 and 4,400 miles, respectively, is likely a bit too close to the aircraft's range for comfort — especially during the strong winter headwinds. Hayes said JetBlue is focusing exclusively on Boston and New York for now.

And while Hayes was clear that the launch isn’t dependent on onward traffic, he did mention that JetBlue has strong partnerships beyond the US, adding: "I’m sure that those partnerships will be strengthened further by the addition of these flights."

Hayes declined to share more details in advance of the official announcement. That said, he was clear that JetBlue doesn't need "any partner traffic for this to work."

Of course, there's a huge opportunity when it comes to point-to-point business class, given the sky-high fares legacy carriers command for lie-flat seats today. Midweek fares typically approach $9,000 round-trip for nonstop options — an absurd rate that JetBlue is eager to disrupt.

While Hayes would not comment on what pricing he has in mind — and any suggestion would be premature today, given that flights won't launch for a couple of years — he did reference JetBlue's impact on transcon-flight pricing, implying that we could see a similar strategy and effect with transatlantic flights.

"Transcon Mint, [in] 2014 we came on, we offered a lead-in fare of $599," he said. "Average fares between the Northeast and California in premium are [now] about half what they were before we started flying. When I look at the published fares between New York, Boston and London, they’re even higher than they were for the legacy airlines between New York and Boston and California, so we think that gives us an even bigger opportunity to cut fares than we did when we started flying Mint to California."

Lower fares will certainly make JetBlue attractive to small businesses. But what about customers who aren't so price-sensitive, such as bankers and other executives who might be happy to pay a cool nine grand for a round-trip if they are motivated by personal incentives, such as frequent-flyer miles and loyalty perks?

I suggested an overhaul of TrueBlue might be helpful, including revamped elite tiers. Hayes seemed confident in the program's current iteration, however.

"We want to make sure our loyalty program is competitive, but TrueBlue and our Mosaic program bring some really unique benefits to customers," he said. "For example, the fact that you can earn and burn on any JetBlue flight, I think, is something that’s going to be extremely attractive for a European operation. The ability for Mosaics to waive change fees is something that business travelers appreciate very much. We’re always looking at it, but already today we have a very strong offering with our TrueBlue Mosaic program. It is different than the legacy airlines, but in many ways I think it’s better."

The product itself will be a key factor as well, of course. And while the current Mint seat could be competitive in the transatlantic market — especially the even-row closed-door suites — JetBlue says it's planning to introduce a brand-new product to coincide with this launch.

While Hayes wouldn't confirm the number of next-gen Mint seats each A321LR might offer, he did note that the cabin will be larger than the 16-seat version available today, due to the lack of a second set of exit doors forward of the wing.

"We are reimagining the Mint experience," he said. "Our intent is to create an experience like flying on a private airplane, but for a fraction of the price. Of course, the service will be delivered by our award-winning JetBlue crew members. Our No. 1 compliment from customers in Mint is [about] the JetBlue crew member that serves them, and that’s obviously going to continue."

The ground experience will be a factor, too. American Airlines offers transatlantic business-class passengers access to the Flagship Lounge, and United flyers can visit the Polaris Lounge, a world-class predeparture hangout at Newark (EWR). JetBlue doesn't offer any lounge access at all, and there isn't even a third-party option at JFK, since the Airspace Lounge closed a few months ago.

While a lounge is clearly an important amenity for frequent business travelers, Hayes wouldn't commit to a new lounge network, simply saying, "We have a good understanding of what the market needs. JetBlue always tries to find a way of doing it differently, giving customers something that’s unique."

Hayes was also mum on details when it comes to what a transatlantic experience would be on JetBlue's economy offering, Core, but did suggest that the airline's more popular amenities would make their way across the Atlantic, too:

"In Core, JetBlue today is known for live TV, free broadband Wi-Fi, [and] the most legroom in coach, and that is a very important part of our JetBlue experience," he said. "We’re confident that we’re going to put a premium cabin and a Core cabin that will offer customers the best experience flying across the Atlantic — and again, at a fraction of what they’re paying today in the front."

Many carriers also offer full hot meals in all cabins on transatlantic flights — and since we're talking about JetBlue here, that could include the potential for some fun British touches.

“We’ll have to figure out a way of doing great fish and chips,” Hayes added, chuckling.