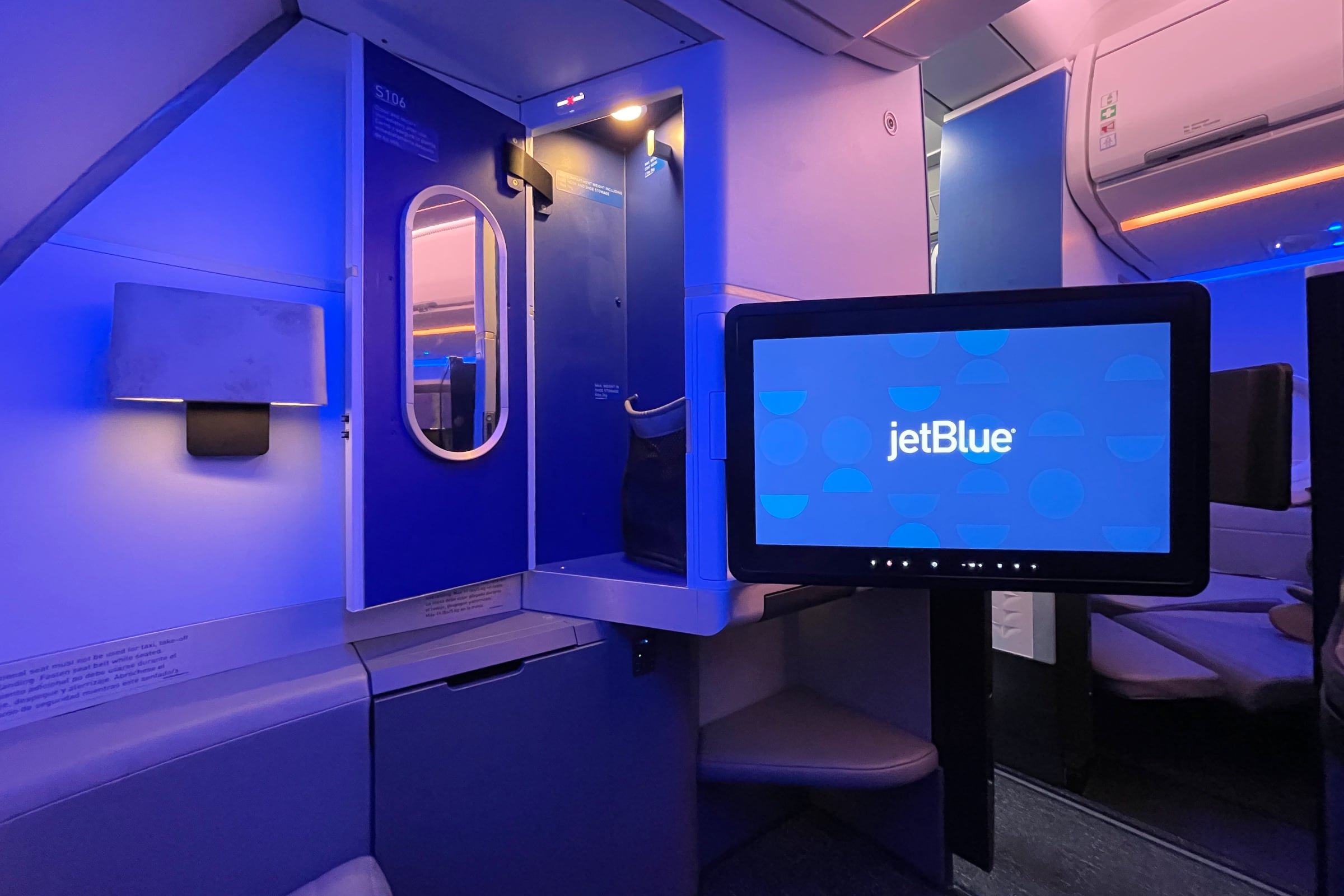 Well, it's official — I think I just found my new favorite narrow-body airplane. I just had an opportunity to tour JetBlue's first Airbus A321neo with the new Mint business-class cabin, and let me just say, this thing is a stunner.

I've been waiting for this day since long before the airline shared an early look at the new product, and renderings of what it should look like on the first plane. Well, now that it's here, I have to say — I am truly impressed.

JetBlue will eventually operate two versions of the latest Mint-equipped A321, in addition to the all-economy A321neo planes already flying for the carrier today. One, the A321LR, will offer 24 Mint suites, and will fly travelers between the East Coast and Europe.

The airline will also operate a version with 16 Mint suites on flights within the U.S., including the carrier's launch route for the plane of New York-JFK to Los Angeles (LAX), where this variant should begin flying as early as June.

Customers could also eventually find this version flying between the U.S. and short- and medium-haul international destinations, including cities in South America and the Caribbean.

At the front of each biz-equipped A321neo, you'll find two Mint Studios — a special version of the carrier's suite that includes more personal space, a larger entertainment display and a seat that a travel companion can use to join you for a meal during the flight.

The studios really are quite a bit more spacious. While JetBlue hasn't decided how they'll be priced, I wouldn't hesitate to spend, say, $100 more on an extra-long flight.

All of the suites have a decent amount of storage, but studios add a large closet up front, complete with a storage pocket and a mirror.

There's also a larger display — 22 inches, compared with 17 in other rows.

Studios also have the benefit of being at the very front of the cabin, so you'll likely have extra attention from the flight attendants, given that the galley is just a few steps away.

Studio flyers can also have a buddy join them in the adjoined belted seat — another Mint passenger can sit there after takeoff, and join for a meeting or meal.

As with all suites, the studios offer a door that slides completely closed, and the monitor pops out and can be tilted down, making it easy to watch a movie or TV show with the seat in bed mode.

Each suite includes a 17-inch TV, capable of displaying 1080p content — a step up from what you'll find on many other airlines.

While the suites almost look cramped in pictures and renderings, I found them to be more spacious in person.

Seats are angled towards the aisle, but they still offer a fair amount of privacy — you'd need to go out of your way to make eye contact with another passenger, especially with the seat reclined.

Of course, if privacy is what you're after, you can always just slide the suite door shut.

You really do have quite a bit of privacy with the door closed. Still, it doesn't span all the way from the floor to the ceiling, as with Emirates' latest suite — passengers walking down the aisle can easily glance over the divider, but it definitely makes for a cozier space.

There's also a fair amount of storage throughout the cabin, including extra-large overhead bins, a standard feature on the A321neo.

Each suite also includes a slide-out drawer under the display, which I found to be large enough for my 13-inch laptop.

There's also a dedicated shoe compartment, plus storage for a smaller bag under the ottoman.

All suites also include Qi wireless charging pads by the windows, along with another small storage compartment.

We'll be comparing the new suites with JetBlue's tried-and-true current product soon, but I did want to touch on a few elements of the new experience here — some of the upgrades are so significant, they're worth noting twice.

First, the sliding door. While Delta One suites include a sliding door on the Airbus A350 air A330-900neo, you're unlikely to find that product regularly flying with the U.S. JetBlue will be the only airline to consistently offer sliding doors on domestic and regional flights, and unlike with the previous product, every Mint seat includes a door here.

One cabin, two products. Each biz-equipped A321neo offers two special Mint Studios at the bulkhead row, offering extra space, a larger display and a buddy seat for a friend to join you for a chat or a meal. It's unclear how much more you'll pay for the privilege of sitting there, but it could be worth a small fare bump, for sure.

It's not just about good looks — there's a real focus on comfort, too. Every Mint seat is actually constructed around an integrated Tuft & Needle mattress. While we haven't had a chance to try it in the air yet, I was able to tell the difference during a quick suite visit.

JetBlue offers the best domestic "soft product." Although American, Delta and United all have very solid international offerings, including special bedding and multi-course meals, the domestic experience can be a bit inconsistent. With JetBlue Mint, you'll always get premium pillows and blankets, amenity kits and upgraded meals. It's definitely a step above the rest.

How to fly the new Mint

Initially, JetBlue's new Mint product will be available on the Airbus A321LR, operating flights to Europe, and the regional-focused A321LD. These two A321neo versions will offer 24 and 16 Mint suites, respectively.

JetBlue is constantly updating its route map, and while it's likely to look a bit different by the time many more new A321s join the fleet, the graphic below will give you an idea of where to find Mint as of now.

The A321LD is expected to begin flying domestic passengers as soon as June 2021, when it launches on the carrier's existing route between New York-JFK and Los Angeles (LAX). Meanwhile, the A321LR should begin flying later this year, with JetBlue's inaugural service between the East Coast and London.

As for how much it'll cost — JetBlue has yet to confirm which flights will have the new product at launch, but the airline frequently publishes transcon Mint fares as low as $529 each way. You can also book Mint with TrueBlue points, though pricing is a bit less attractive for premium-cabin redemptions, at 47,900 points and up.

JetBlue's latest Airbus A321neo easily offers the most appealing business-class product you'll find on flights operating within the United States. Sure, there are more spacious and luxurious products flying internationally — ANA's The Room and Qatar Airways' Qsuite, for example — but JetBlue's latest offering is without a doubt one of the most appealing products you'll find flying within the U.S.

The A321neo is a notable step up in the economy cabin, as well — flyers have access to the airline's latest in-flight entertainment system, 18.4-inch seats and a fun walk-up snack bar, located just in front of the Even More Space seats.

Related stories
Here are the best Black Friday travel deals of 2022
Great deal: Book business class tickets at premium economy prices with this Avianca LifeMiles sale
Holiday gift guide: TPG’s 22 travel-friendly picks for 2022
Vail Resorts lift-ticket sales capped; buy your Epic Pass by Dec. 4
Featured image by (Photo by Zach Honig/The Points Guy)
Editorial disclaimer: Opinions expressed here are the author’s alone, not those of any bank, credit card issuer, airline or hotel chain, and have not been reviewed, approved or otherwise endorsed by any of these entities.