Dated, But Did the Job: JetBlue Even More Space on the A320 From San Juan to New York

Articles
Nick Ellis joined The Points Guy in 2016 as an intern and is now Reviews Editor, primarily responsible for arranging, writing (some of), editing and publishing reviews of hotels and airport lounges along with helping manage, write and edit travel content.
Follow
Feb. 02, 2019
•
10 min read 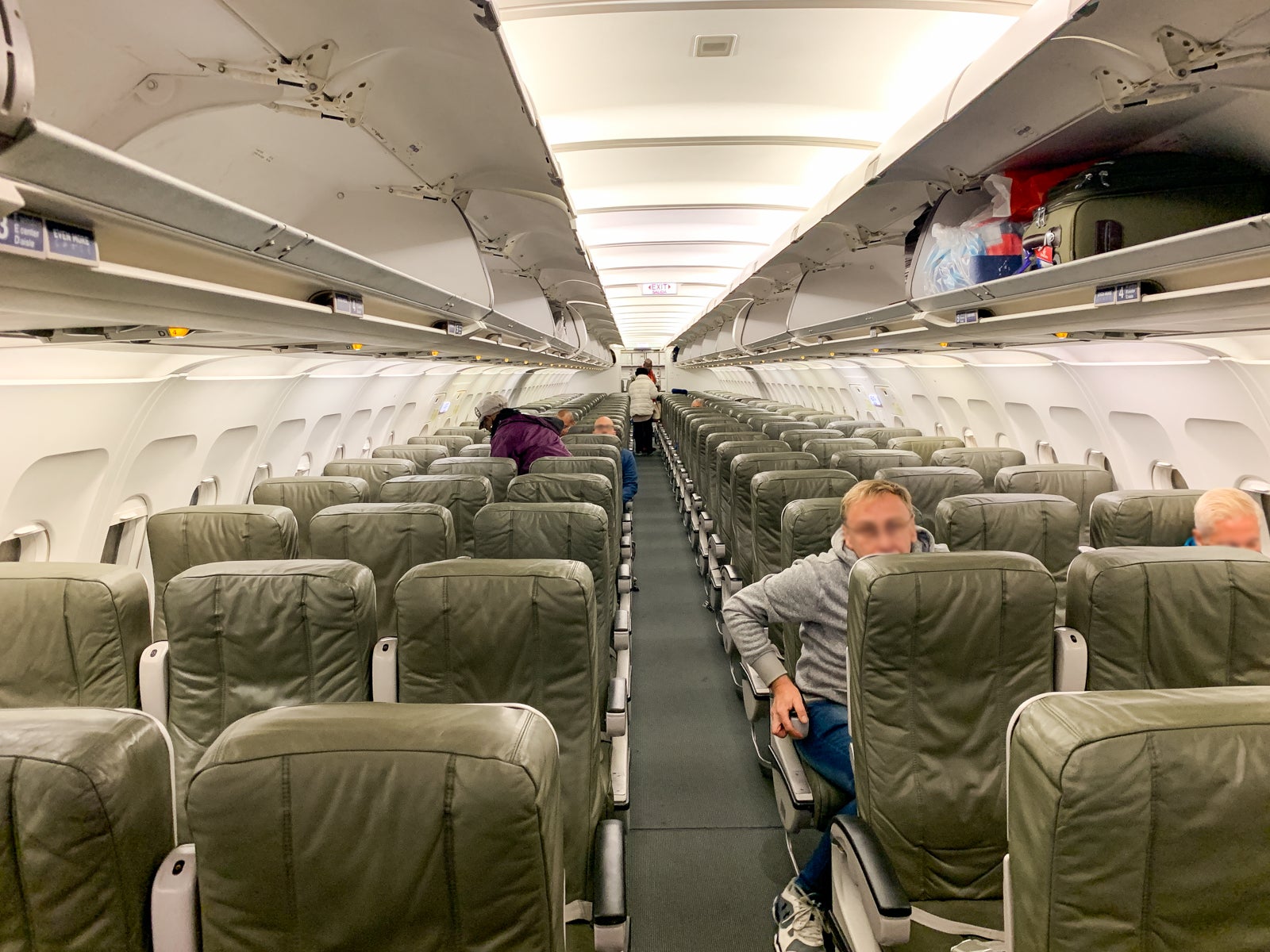 Dated, But Did the Job: JetBlue Even More Space on the A320 From San Juan to New York
This post contains references to products from one or more of our advertisers. We may receive compensation when you click on links to those products. Terms apply to the offers listed on this page. For an explanation of our Advertising Policy, visit this page.

In late January, I was assigned the arduous task of spending a week in Puerto Rico, primarily to review two recently opened resorts: Dorado Beach, a Ritz-Carlton Reserve, and The St. Regis Bahia Beach Resort (stay tuned for full reviews of both — coming soon!). Each resort is about a 40-minute drive from San Juan's Luis Muñoz International Airport (SJU) — but in opposite directions.

Since I'm New York-based, there are plenty of options for getting to SJU — Delta, JetBlue and United all fly nonstop from both New York-JFK and Newark (EWR) airports. Unfortunately, since we booked just a few days before departure, tickets with my airline of choice, Delta, were outrageously priced, while JetBlue was offering pretty reasonable last-minute fares. The carrier operates a mix of its A320s and A321s (which, by the way, won a TPG Award for best domestic economy product) on flights between the NYC area and San Juan, but the flight times I needed were both on an A320, the mainstay of the JetBlue fleet.

After finding the ideal itinerary on Google Flights, we booked the ticket from EWR to SJU to JFK directly with JetBlue for $376. We put the purchase on the Platinum Card® from American Express to take advantage of the card's 5x bonus on flights booked directly with the airline or through Amex Travel. We earned a total of 1,880 Membership Rewards points, worth about $36, according to TPG's current valuations. You can book flights with TrueBlue points, obviously, but the cost varies with the price of the ticket, and often it's not a great deal. Since we paid cash, I was able to earn miles for this trip — in this case it was a total of 2,050 TrueBlue points.

I booked a late departure from SJU back to NYC so that I could maximize my time relaxing working by the pool. Departure was scheduled for 9:26pm, but I got a text notification from JetBlue around 7pm telling me that the flight had been pushed back just over a half hour to 10pm. That was fine with me, though — more mojitos time to work!

I took an Uber from The St. Regis to SJU, which took about 40 minutes with light traffic, and arrived at Terminal A around 8:30pm.

Before I could check in, I had to bring my bags to the agricultural inspection checkpoint, since I was flying to the mainland United States. Once my bags were inspected, I headed to the check-in kiosk to start the process. I simply looked up my reservation and then printed a bag tag for my checked luggage. Then I proceeded to the counter, where the friendly agent scanned it and sent it on its way. Since it was so late, and also thanks to TSA PreCheck, I was through security and on my way to the gate in under five minutes.

There was a Priority Pass lounge in Terminal A at SJU (you can get a complimentary membership with certain premium credit cards like the Amex Platinum or the Chase Sapphire Reserve) but it was already closed when I arrived, so I grabbed a seat at the gate and pulled out my laptop to watch Netflix finish up the day's work, but, alas, Wi-Fi wasn't free.

I didn't have much time, either, so it wasn't worth it to purchase a plan. I'd bought an Even More Space seat, which meant I got to board in Group A, just after passenger with disabilities.

Once on board the 17-year-old A320, which was delivered new to JetBlue in 2002, I felt like I'd actually stepped right back into 2002. While the carrier's fleet of A321s (and retrofitted A320s) sport nice new interiors with smart-looking seats, cool lighting schemes and large seatback IFE screens, this unretrofitted A320 had tired-looking gray leather seats, harsh lighting and absolutely tiny IFE screens.

It wasn't all bad, though. Even though the seats were old, they were really comfy — they were the old style with plenty of padding. And there was So. Much. Legroom. You could tell the plane's age, though, as the leather was worn on the seats and the carpet stained from years of use.

This A320 configuration featured seats that were just about 18 inches wide in a 3-3 configuration. Like I mentioned above, the legroom was downright palatial, with Even More Space seats offering 38 to 39 inches of pitch. Even regular economy seats on this aircraft were roomy, with 34 inches of pitch.

I had an aisle seat, which I chose reluctantly, because I always choose window seats (when available). But for a nighttime flight it was totally fine. And not having a passenger in the middle seat made things even more comfortable.

One annoying thing about these seats (and those on JetBlue's A321s, too) was that the controls for the IFE screens were in the armrests between seats (pictured below in the far armrest). This meant that when the armrest was down, my elbow was inadvertently making all sorts of adjustments on the screen — it didn't matter at all this time (more on that later), but it certainly would be annoying on a flight where I wasn't just trying to sleep for a majority of the time.

The cabin was dated, yes, but I wasn't looking at it while I was asleep, so it really didn't matter all that much. I was comfortable and had plenty of room to stretch out, which is arguably the most you can ask for on a coach flight.

The IFE was where this experience really faltered. JetBlue offers free Wi-Fi on its flights, which is awesome, but on this flight, it didn't work outside the continental US, which meant it wouldn't be functioning until about the last hour of our flight, and by that time I was already asleep.

Besides Wi-Fi, JetBlue offered 36 channels of live TV through DirecTV, three movie channels, "JetBlueTV" (though I never quite figured out what that was) and 100 channels of SiriusXM radio.

I'd say that this IFE system was rudimentary, at best. The first issue was that the screen was pretty tiny and had poor resolution.

The next problem was, well, that nothing really worked. Like the Wi-Fi, the DirecTV was only available within the continental US, meaning it didn't work for the majority of the flight, either.

Then there were the movie channels, which worked fine, but there were only three of them, and you had to join a movie that had already started, which made it none too enjoyable. Plus, I didn't recognize anything that was playing, and none of them really captured my attention.

So, for most of the time that I was awake, I had the screen on the map function, so I could track our progress toward the continental US. Since I'd flown the same type of aircraft on the way to Puerto Rico, I'd planned to download a few shows on the Netflix app on my phone so I could be entertained, but since I didn't purchase Wi-Fi in the airport terminal, that didn't happen.

The A320 fleet is currently being refurbished, though, so the IFE experience should be much better if you find yourself on one of the rehabbed planes.

There was a significant amount of turbulence on our climb out of San Juan, so cabin service didn't start for quite a while after takeoff. By the time it did start, I was peckish. JetBlue offered a buy-on-board program with plenty of options, and I settled on a cheese plate. The friendly flight attendant explained that if I did a wine-and-cheese pairing (fancy!) I'd get a 15% discount, so I paid $12 for a pretty solid snack and a glass of red wine. Sure, it wasn't restaurant quality, but I'd pay more than that just for a glass of wine on the ground in NYC. I was satisfied.

I have to give a shoutout to the napkin I received with my snack: It read "Flying without earning points is like leaving money on the tray table." TPG-approved!

JetBlue is also famous for its basket of unlimited snacks. After the first service was complete, the FAs came through the cabin again with the basket. Passengers could choose anything (and as much as) they wanted — definitely a customer-friendly touch. However, I didn't have anything more, as I was pretty full after my wine and cheese.

The service I experienced on my JetBlue flight was great. Every interaction I had with the flight attendants was positive. I made my way to the front galley several times to ask for more water, and they gladly handed over mini bottle after mini bottle. I've had a few experiences with JetBlue before, and all of those were consistent with my most recent experience, so it's a safe bet that you'll get friendly flight attendants on your flight, too.

Although it wasn't on the the most up-to-date plane around, this economy flight with JetBlue did the trick. The IFE was disappointing, yes, but on this particular flight I wanted to sleep more than anything, so it wasn't too much of a disappointment. What it lacked in IFE, it made up for in friendly flight attendants and plentiful food offerings. When all of the airline's A320s are done being refurbished, it'll likely be a mixed bag for passengers. The plane will look spiffier and the IFE will be greatly improved, but gone will be the days of practically unlimited legroom (though the airline will still have the most legroom in coach out of all the US airlines) and the big, almost excessively padded leather seats that are a nod to the flying experience from a few decades ago.