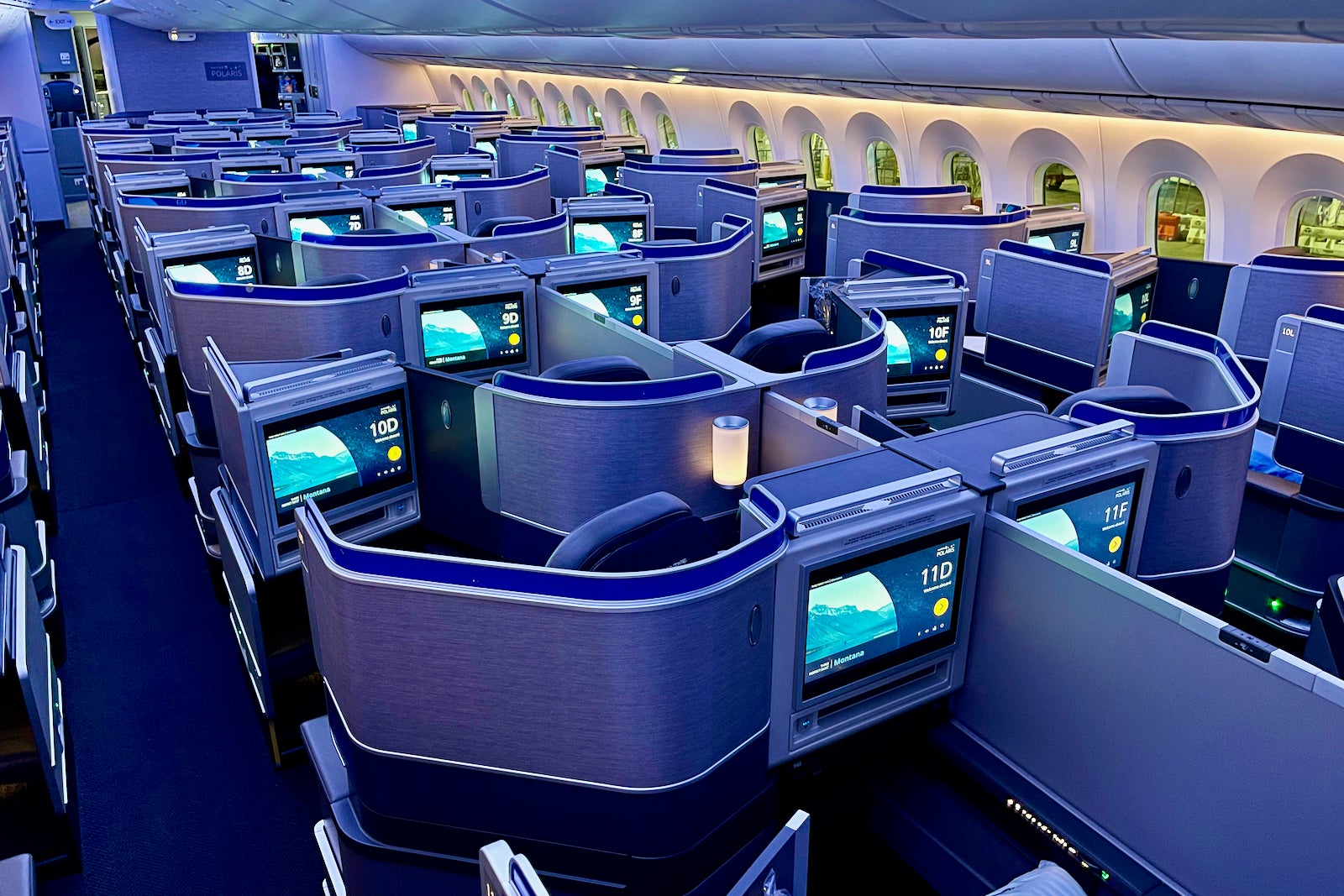 Since then, the airline embarked on (what has felt like) an endless retrofit project to outfit its existing international fleet with these top-notch cabins.

Though the carrier has made substantial progress since rolling out the first retrofitted plane back in 2017, there are still a handful of wide-body jets that feature the old lie-flat product. Fortunately, that number keeps dwindling, and United is now on the cusp of having all of its active international widebodies retrofitted.

During a media briefing about United's largest-ever transatlantic route expansion, Patrick Quayle, senior vice president of international network and alliance, gave TPG a fleet-by-fleet overview of where things stand with the onboard product, so read on for the good news.

Only one of United's new flagship transatlantic destinations announced on Thursday will be operated by a Boeing 767-300ER (Palma de Mallorca, Spain).

When asked about what onboard product flyers can expect on this flight, Quayle was eager to tell travelers that it'll be United's latest Polaris cabin.

Only five of United's Boeing 767-300ERs still have the legacy cabins with the Collins Diamond business-class pods in the pointy end of the plane. One of the five remaining jets is currently receiving the Polaris modification in Hong Kong, and the other four will be complete by February 2022, according to Quayle.

United is splitting its 39 Boeing 767-300ERs into two different Polaris layouts. There's a premium "high-J" version with a whopping 46 business-class pods, 22 Premium Plus recliners and 99 coach seats, as well as a "standard" layout with 30 Polaris pods and 184 coach seats.

Taking a look at the seat map for your upcoming flight will confirm which layout you'll experience.

Along with the Boeing 767-300ER, United's Boeing 787-9 Dreamliner fleet is still undergoing the Polaris and Premium Plus cabin retrofits.

To date, 50% of the airline's 787-9s are outfitted with the new cabins, with three more in the retrofit process as of press time.

As for the remaining Dreamliners, Quayle told TPG that they'll be completed by early summer 2022, barring any supply chain issues with the seat installation and manufacturing process.

For many routes operated by the Boeing 787-9, you won't know which cabin you'll get until a few days before departure. Some others, however, will always be operated by a Polaris-equipped Dreamliner.

If United's selling its premium economy cabin, dubbed Premium Plus, on your route that's operated by the 787-9, then you can be certain that the flight will feature the new Polaris seats.

If you're flying in United's premium cabins, this is the plane to avoid.

Before the pandemic, United's 767-400ERs were a workhorse on flights to Europe and South America. Once the pandemic decimated demand for long-haul flights, United opted to store these gas-guzzlers and instead use the more fuel-efficient Boeing 787 Dreamliner for its skeleton international network.

But in February, a chunk of the carrier’s Boeing 777 fleet was be grounded following an uncontained engine failure, leaving United with no option but to bring back the 767-400ERs.

United has 16 of these planes, and none of them have received the new cabins, nor is there a timeline available for when the retrofits could start.

All United Boeing 777-200s that operate long-haul international routes have already been updated with the latest cabins.

The carrier has a subfleet of 777-200s that primarily serve domestic destinations, including Hawaii, and other short-haul markets. These planes have a very outdated 2-4-2 "dorm-style" business-class cabin, and there are no plans to upgrade these cabins with the Polaris retrofits.

For now, this subfleet of planes, along with the international 777-200s powered by Pratt & Whitney engines are parked pending an investigation into the aforementioned engine failure that occurred earlier this year.

All 22 of United's Boeing 777-300s are already outfitted with the Polaris and Premium Plus cabins.

All 12 of United's Boeing 787-8 Dreamliners have already been retrofitted with Polaris and Premium Plus cabins.

All United Boeing 787-10 Dreamliners feature Polaris and Premium Plus cabins.

I, for one, can't wait for the cabin "guessing game" when flying United to be over. Though it's taken a while, the finish line for United's Polaris retrofit program is on the horizon.

By next summer, all of the carrier's international widebodies, excluding the 767-400ER fleet, will be outfitted with the latest cabins, which is great news for anyone who's booking long-haul routes with United.

Related stories
Here's what happens when Disney World is hit by a hurricane
MileagePlus members can't book most Lufthansa award space — here’s what we know
Canada to remove all remaining COVID-19 requirements Oct. 1
Can you go on a cruise while pregnant?
Featured image by (Photo by Zach Griff/The Points Guy)
Editorial disclaimer: Opinions expressed here are the author’s alone, not those of any bank, credit card issuer, airline or hotel chain, and have not been reviewed, approved or otherwise endorsed by any of these entities.

Our points-obsessed staff uses a plethora of credit cards on a daily basis. If anyone on our team wouldn’t recommend it to a friend or a family member, we wouldn’t recommend it on The Points Guy either. Our opinions are our own, and have not been reviewed, approved, or endorsed by our advertising partners.
See all best card offers
Related stories
News
Here's what happens when Disney World is hit by a hurricane
News
MileagePlus members can't book most Lufthansa award space — here’s what we know
News
Canada to remove all remaining COVID-19 requirements Oct. 1
Guide
Can you go on a cruise while pregnant?