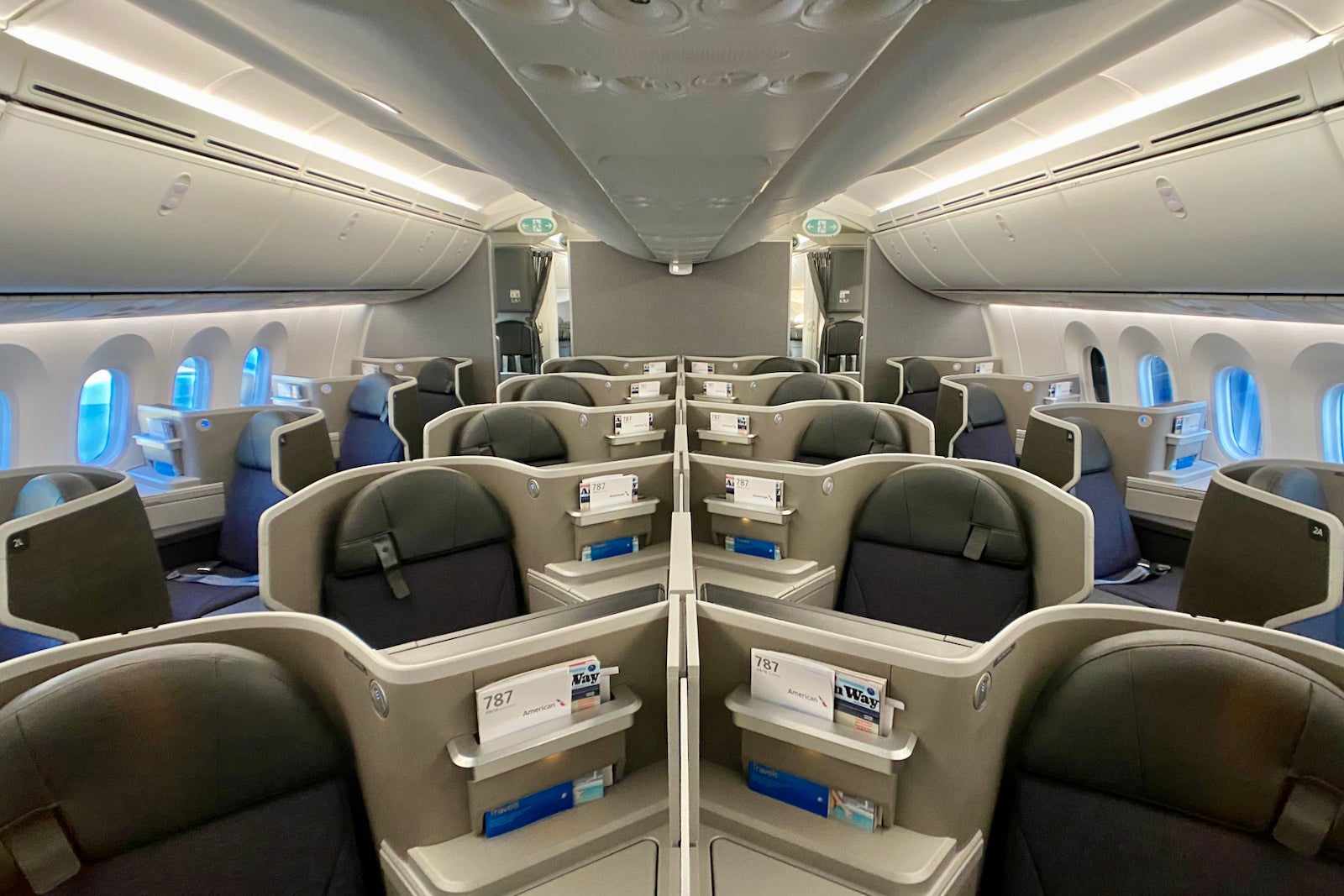 2020 isn’t all bad news for the aviation industry.

But that's not all.

The next time you step foot on an AA wide-body plane, you might not recognize where you are. That's because the carrier has retired its Airbus A330 and aging Boeing 767 fleets in favor of newer and more fuel-efficient Boeing jets. Post-pandemic, American will exclusively operate the 777 and 787 Dreamliner for its long-haul jaunts.

And if you're especially lucky, you might even find yourself on one of American's new "baby" Dreamliners. Despite the pandemic, the carrier began taking delivery of factory-fresh 787-8s — the shortest variant of the Dreamliner — back in March. AA expects 13 more Dreamliners to enter the fleet by the end of 2021.

Because of the coronavirus, the first batch of new planes sat in storage until Nov. 5. Now, these "787Ts," as they're referred to internally, are gracing the skies.

You can track the first three jets with their registration codes: N870AX, N871AY, N872AN. Cirium schedules show that the 787-8 fleet will be based in Chicago, Dallas, Miami and Philadelphia through the end of the year, with many flying entirely domestic routes. However, you won't know which variant of the 787-8 will be operating your flight until just a few days before departure.

TPG spent some time on the newest bird, N872AN, and what follows is your first look inside.

Flagship Business on the new 787-8

You’ll find the biggest improvements on the latest 787-8s in the flagship business-class cabin.

Each of the 20 reverse herringbone pods offers direct aisle access and converts to a fully flat bed at the touch of the seat-control screen.

Seats are spread across five rows in a 1-2-1 configuration. Note that row 5 is missing windows on both sides.

For one, they have a retractable privacy divider. This is a massive upgrade for anyone who has been stuck in the middle seat next to a stranger on an older 787-8.

On the new plane, half of the divider is fixed in the upright position, and the other half can be opened manually.

Another nifty addition is the mirror underneath one of the two storage compartments. This will definitely help me freshen up after a short six-hour hop to Europe.

Aside from transitioning to a fully touch-based control system, the remote has an "Air Mouse" mode. As you move the remote, the cursor on the seatback TV moves as well. When you've highlighted your selection, all you need to do is touch the remote to move to the next screen.

As a tech enthusiast, this is a cool feature that I'll definitely use when I'm reclined in bed mode.

The seatback screen also received a nice upgrade. There are new controls at the bottom of the monitor for brightness, volume, overhead lights and more.

Like the larger 787-9, each business-class seat has a shoulder strap that'll need to be worn for taxi, takeoff and landing.

Additionally, AA says these seats offer "open living space" around the footwell and ottoman area. That's definitely the case — and a notable enhancement — though it's hard to tell if there is any more space than you'll find on other comparable products.

Business travelers and road warriors will be thrilled to know that the new batch of 787-8 have ViaSat Wi-Fi. This satellite-based service offers much faster speeds than AA's older Panasonic system on the original set of 787-8 Dreamliners. (And with AA's new Wi-Fi pass, accessing the internet across planes is easier than ever.)

Right behind the cabin is a self-serve bar area reserved exclusively for the 20 business-class passengers. This also serves as the welcome area for flyers as they board the new Dreamliner.

All in all, the new business-class seat is dramatically better than the one on the older 787-8s. In fact, it's likely the second-best in the entire flight, just below the Safran Cirrus pods you'll find on the 777-300ER. It's just too bad AA didn't take a design cue from its joint venture partner across the pond and install doors on these pods.

Though biz products differ widely across the AA fleet, the premium economy offering is the exact opposite.

AA outfits its wide-body jets with the Rockwell Collins MiQ premium economy seat. The same is true on the new 787-8.

This recliner — nearly identical to the domestic first-class seats — is quite comfortable. Each seat sports an industry-average recline and has a footrest built into the seat in front. Those in the bulkhead have a footrest and leg rest, something to consider if you're faced with the choice of where to sit.

Premium economy on the new 787-8 is arranged in a 2-3-2 configuration, spread across four rows.

The bi-fold tray table pops out from the armrest, and you can find a power outlet and USB port in the second armrest.

There's also a slightly updated inflight entertainment remote on this "baby" Dreamliner. It wasn't immediately clear if there were any enhancements other than the new design.

Of the three cabins on the new Dreamliner, coach is the one that's changed the most.

American Airlines has installed a totally new economy seat — the Rockwell Collins Aspire seat — on the 787-8.

Though parties of two might opt for the "couple seats," note that they are quite close to the galley and lavatories — ambient noise might be bothersome.

In total, there are 48 extra-legroom Main Cabin Extra seats and 138 seats in coach, all split across two cabins.

Each has a seat-back monitor, extendable bi-fold tray table and power outlet.

Note that rows 27 and 28 have misaligned windows.

The Aspire seat is definitely slimmer than the ones you'll find on the older 787-8s.

So, is it an improvement? Well, that comes down to personal preference. There's definitely more space between your seat and the back of the one in front of you, but there's less padding than beforehand — something many fliers find to be far less comfortable. (United installed the same coach seats on its new 787-9 Dreamliner.)

On longer flights, some might prefer the older 787-8. Me? I'll try applying my systemwide upgrades to bump to biz.

The new American Airlines 787-8 Dreamliner is a marked improvement from the original 20 already flying for the carrier.

The business-class pods are now some of the best in the fleet, and a massive upgrade compared to the old alternating ones. With a brand-new seat, the coach cabin received a major update as well. Premium economy is largely unchanged, but that's not a bad thing.

Across the board, each cabin received some tech enhancements as well. With new remotes and seat-control buttons, the inflight entertainment system is purpose-built for the future. Plus, with speedier ViaSat Wi-Fi, the new 787-8s will be some of the most tech-forward jets in the AA fleet.

Now, I'm just dreaming of the day when I can board one of these 787s bound for a far-flung destination.