Consistently Inconsistent: American Airlines in Business Class on the 777-300ER From New York to London

Articles
Nicky Kelvin is the director of content and face of TPG UK, and is also an award-winning photographer. Before joining TPG UK, he was a record label lawyer and avid traveler sharing points wisdom as the "Miles Mogul."
Follow
March 26, 2019
•
13 min read 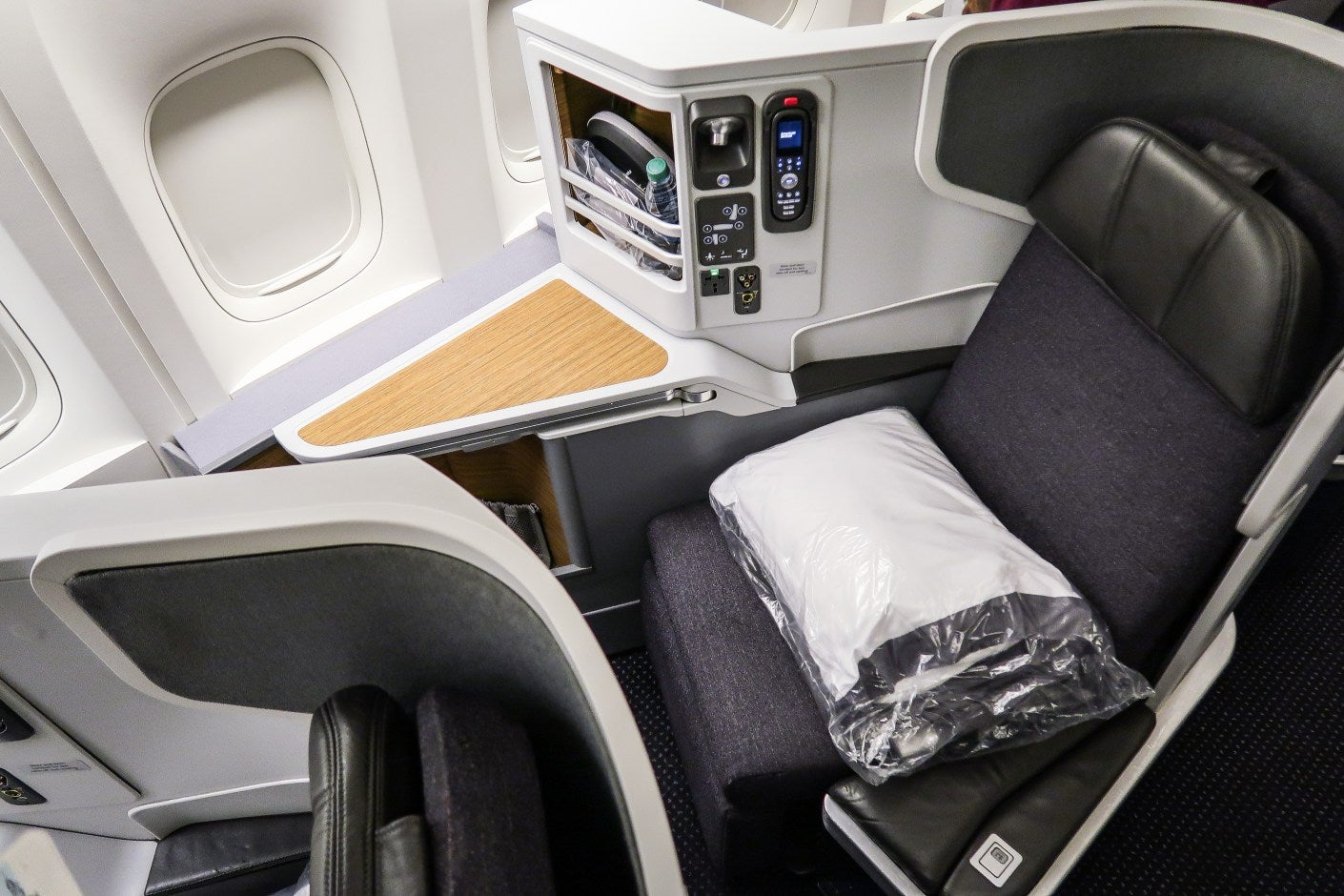 Consistently Inconsistent: American Airlines in Business Class on the 777-300ER From New York to London
This post contains references to products from one or more of our advertisers. We may receive compensation when you click on links to those products. Terms apply to the offers listed on this page. For an explanation of our Advertising Policy, visit this page.

In the last several months, I've been traveling very frequently between my home in London and TPG headquarters in New York City. While I've gotten to try a number of transatlantic products, I'm partial to the Oneworld alliance, so I've jumped at the chance to hop on board the nonstop British Airways or American Airlines flights. I recently had a fantastic experience on BA's 747 in the upper deck, but it had been a while since I'd flown AA's flagship aircraft in business class, so when I found that an award ticket was available on an AA Boeing 777-300ER on the day that I needed to get myself back home to London, I didn't hesitate to book.

Business-class fares between New York and London are hardly ever cheap -- oftentimes round-trip nonstop flights will sell for $8,000 or more. This particular route is one where your points and miles can really make some magic happen. And, on the day I needed to travel back to London, American Airlines had business-class saver availability on the nonstop JFK-LHR route. Even better, one of the flights with availability was operated by the airline's flagship Boeing 777-300ER. We quickly booked the ticket with 57,500 AAdvantage miles and $5.60, and I was set to hop across the Pond yet again.

If your AAdvantage account balance is running low, consider signing up for the Citi® / AAdvantage® Platinum Select® World Elite Mastercard®, which is currently offering a sign-up bonus of 50,000 bonus miles after spending $2,500 on purchases in the first three months of account opening. So, just by signing up for one card, you'd earn almost enough miles for a similar one-way business-class flight. The information for the Citi AAdvantage Platinum card has been collected independently by The Points Guy. The card details on this page have not been reviewed or provided by the card issuer.

New York-JFK was calm, cool and collected the afternoon of my flight. Since I was flying business class, I had access to the priority check-in desks. Combine that with TSA PreCheck, and the whole check-in and security-screening process was quick and painless -- I was through in about 10 minutes.

Immediately after passing through security, I headed to the Terminal 8 American Airlines Flagship Lounge and straight across into the slightly less-known Bridge, accessed by turning right at the top of the stairs, where the foyer leads to the main lounge.

There was cafe-style seating in this part of the lounge, with both bar and sit-down service. It was very quiet when I was there, and this may have contributed to the more attentive service I received the entire time.

I was incredibly well-looked-after by Eric, who made sure I had everything I needed.

The Bridge offered an a la carte menu, an improvement on the slightly sad-looking buffet on the other side of the lounge.

On Eric’s recommendation, I ordered the short-rib tacos, which were delivered quickly and delicious. I also sampled the sausage-and-pepper sandwich, which was more forgettable than the tacos.

Wi-Fi was strong on the Bridge, and, as I mentioned earlier, it was quiet -- conducive to getting preflight work done.

I decided to leave the quiet Bridge and take a peek at the main part of the Flagship Lounge, which was certainly busier. And, much to my dismay, the best seats in the house (those with apron views) were all taken.

Boarding began on time, and I was among the first group of people to get on the plane. It was a surprisingly calm experience, with no waiting around at the gate or on the jet bridge.

I boarded the flight to a frosty welcome. Not the norm in comparison to my previous flights with experienced AA crew heading to London, but on a night flight, crew interaction is not key, and efficiency is paramount -- there's always time to make friends later in the flight!

I find that my mind often changes about the comfort of the American's long-haul seats, and on this flight I felt the seat was hard and relatively uncomfortable. I didn’t get that sinking "aah" feeling when I sat down. Generally speaking, though, the all-forward-facing cabin was fresh and lovely on this relatively new aircraft.

There was plenty of room for my little legs.

The foldout table was large and sturdy with little to no wobble.

Storage space was not the most generous, but at least it existed. The side bin and pocket were easily accessible and the perfect amount of room to fit all the bits and pieces I needed access to during the flight.

I found the bedding to be just acceptable, and the pillow, while large for a plane pillow, was also just OK. There was no mattress pad provided, but I typically find that unless it's really substantial, it makes little difference anyway. Any thoughts of all the people before me who had lain on the raw material beneath quickly slipped away in a haze of fatigue.

The lavatories between the two business-class cabins were large enough to not feel cramped, and looked lovely with a modern wooden trim. C.O. Bigelow products were provided, and facial toner and moisturizer were a luxe touch. It's always nice to see any amenities beyond soap and hand lotion in an aircraft lav.

The IFE was run-of-the-mill, with a decent film selection. However, on this flight, my primary concern was sleep, and on these short overnight flights (this flight was due to come in at just under six hours), a film would have cut too deep into valuable sleeping time.

I didn’t have a great need for Wi-Fi, but purchased it to test. It was incredibly slow and almost impossible to even send messages.

Bottled water was waiting at the seat when I boarded. I requested a further glass and was given a rather disappointingly tiny and flimsy plastic wine cup.

Menus were also handed out, and orders taken before departure.

Hot towels were handed out followed by the drinks cart. My random panic order of Disaronno on the rocks (I just wanted the cute bottle, really, but wasn’t allowed to keep it!) was delivered with a bowl of warm nuts.

The poached shrimp remoulade and baby-spinach-and-arugula salad were both tasty, and while the idea of the buffalo skillet chicken was fantastic, the coating wasn’t the crispiest, and the chicken felt dense and dry. The jalapeño cheddar corn cakes were not as plural as the menu stated (there was only one!), and although it sounded like the perfect accompaniment, it was dry and tasteless.

All was redeemed at dessert with the caramel-cone ice cream, which was huge and delicious.

I had told the crew not to wake me, as I didn’t want breakfast, but after trying to sleep and only catching a couple of hours, the crew was happy to serve me about an hour and a half before landing. I took a croissant, yogurt and fruit and granola plate with a cup of tea, and although not mind-blowing, it was a solid breakfast.

I’ve had a really mixed bag with service on American. A couple of years ago, I encountered one of the best crews I’ve ever had. Here, the service was a little surly. (I like a smile, joke and a chat.) On such a short red-eye, though, this could be forgiven. In terms of service speed, the crew could not be faulted. I had everything I needed, and had it quickly, so perhaps this service was really a blessing and conducive to a good night’s sleep.

One real annoyance, though, was that the headphones were collected aggressively early. On this flight, they were taken away a good 40 minutes before landing, which prevented me from watching more of the IFE. This is a real gripe of mine, especially while the IFE is still rolling (as it usually is these days even until arriving at the gate).

All in all, this was a good flight. American is a solid option across the Atlantic in business class. The seat could be a little more comfortable, and the crew definitely could be more consistent, but generally I would always be happy taking one of these birds to London. This flight came after an outbound flight with British Airways, one where the crew really looked after me. In this instance, BA won out. That being said, the contest wasn't entirely fair. Frankly, I’m in love with the upper deck on BA's 747, and the crew on that flight was truly exceptional and had chance to shine on a longer day flight. I fully acknowledge that this was not American at its very best, so another round of AA and BA flights are in order, perhaps in the opposite order, to give American a fair shot at proving itself.