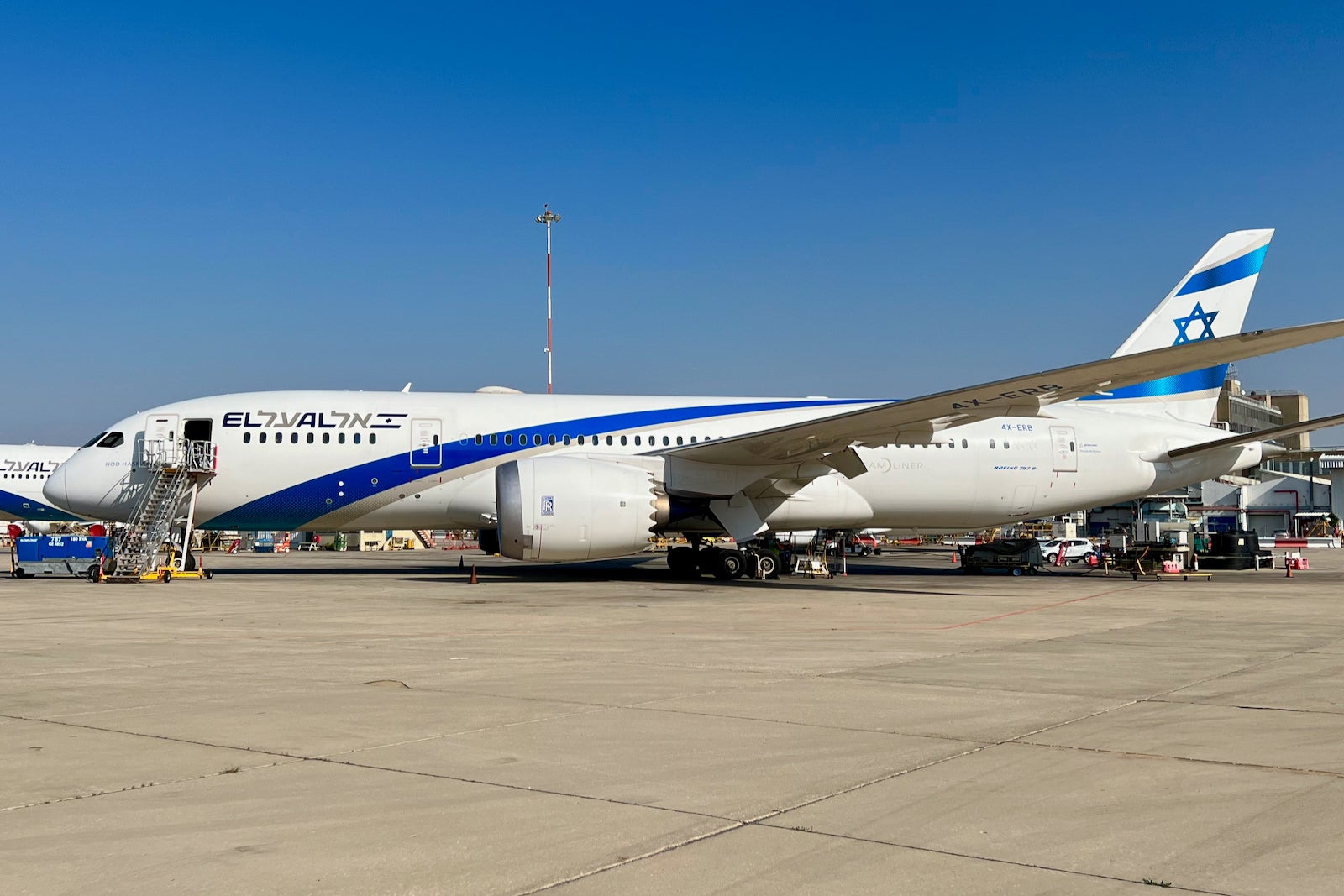 The flag carrier of Israel has historically operated a fleet of aging wide-body aircraft sporting outdated onboard products.

But, those planes have (thankfully) been sent to the boneyard in favor of 16 new Boeing 787 Dreamliners, ushering in a new era for the carrier.

During my recent trip to Israel, I had the opportunity to tour one of the airline’s newest jets, a Boeing 787-8 registered 4X-ERB, at the airline’s hangar at the Ben Gurion International Airport.

I was impressed with the overhauled cabins — so much so that I’m planning to fly El Al for my next flight to Israel (when the country reopens).

And after you see the new products for yourself, you might also put El Al at the top of your list for your next Israel trip.

Perhaps the biggest upgrade you’ll find on El Al’s Dreamliners is in the pointy end of the plane.

Each seat offers direct aisle access thanks to the 1-2-1 configuration. When it’s time to rest, the seats convert to fully flat beds measuring 78 inches long.

There are 20 pods on the “baby” Dreamliner (the smallest of the three 787 variants), arranged across five rows.

Window seats alternate between facing the aisle and being flush with the fuselage and window. If you’re traveling solo, I’d opt for one of the “true” window seats in rows 2 or 4 for the utmost privacy.

If you’re traveling as a couple, you’ll want to opt for the honeymoon pods in the center section of rows 1, 3 or 5.

The seats themselves are quite comfortable and spacious, and the gray, brown and tan finishes feel luxurious.

As you head back to the Premium cabin, you’ll pass the signature diamond branding on the bulkhead wall that’s intended to give off a luxurious, sophisticated vibe for the business-class cabin.

There’s a small, enclosed storage closet at each seat, which is the perfect place to keep your wallet and other loose items during flight. Plus, the faux-wood side table is large enough to hold a laptop or iPad during the flight.

Unfortunately, the 16-inch seat-back screens weren’t powered up during my tour, so I couldn’t put the Panasonic-powered entertainment system to the test.

In terms of connectivity, El Al’s Dreamliners are outfitted with satellite-based ViaSat Wi-Fi, which offers some of the best speeds in the skies, especially for long-haul flights. Of the airlines operating in the U.S. to Israel market, El Al’s Wi-Fi is the fastest and most reliable on paper. (Of course, your mileage may vary once airborne.)

Interestingly, El Al used to offer a first-class cabin on its 747s and 777s, but that’s now been retired in favor of a much more modernized biz cabin. Deep-pocketed travelers likely won’t miss those old-school recliners since the new biz pods are more comfortable and nearly as spacious as the first-class product of yesteryear.

Putting the premium in economy

El Al is betting big on premium economy with its Dreamliners.

The carrier’s 787-8 has a whopping 35 premium economy recliners, compared to 28 and 21 on the same jet operated by American and United, respectively.

Offered at a modest buy-up without a significant splurge for a lie-flat pod, El Al has seemingly been convinced that flyers will upgrade to its premium seats.

For a shorter-haul flight, like those between Tel Aviv and major destinations in Western Europe, I’d definitely consider the upgrade.

The 19-inch wide recliners are arranged in a 2-3-2 configuration spanning rows 10 through 14.

Each sports seven inches of recline and a footrest. There’s an oversized armrest between seats, which houses the bi-fold tray table.

There's a universal power outlet, as well as USB-A charging port, at each recliner.

When it’s time to rest, you’ll enjoy the same Hollandia-branded pillow and duvet as you’ll find in biz — a decidedly premium touch.

The headrest wings on either side for additional neck support, and I appreciated the consistent diamond-shaped branding etched into the fabric of headrest.

Coach is nice, too

The remaining 183 seats are outfitted in a standard 3-3-3 coach configuration spread across two large cabins.

The first seven rows, from 21 through 27, along with the bulkhead exit row 35, are designated as preferred seats. They feature at least three additional inches of legroom compared to standard economy seats.

Other than the added legroom, the seats are the same throughout the coach cabin, measuring roughly 17.5 inches wide.

Each seat has a large 12-inch inflight entertainment monitor, along with a USB-A charging port. There are AC power outlets located between seats in the coach cabin.

Bi-fold tray tables pop out from the back of the seat.

It’s definitely a tight squeeze in coach, especially for a long-haul flight, but the 787’s large windows and lowered cabin altitude should make for a more comfortable ride than the 747 and 777 that this plane replaces.

There are four lavatories in coach, two located in between the coach cabins, along with two at the rear of the aircraft. Each is equipped with a touchless sink and flushing mechanism.

The crew can also catch some Z’s

There’s a special surprise located at the rear of the El Al 787-8 Dreamliner.

Behind a hidden (and locked) door marked “crew only,” there’s a staircase that leads to an upper level above the passenger deck.

This is where you’ll find the crew rest — the place where the flight attendants sleep during their breaks on long-haul routes.

There are six berths up here, each separated by thick curtains for added privacy.

You’ll also find some emergency gear, AC outlets, mirrors and other conveniences up here, including an audio-only entertainment system for the crew.

While I’d still prefer a lie-flat biz pod, the crew definitely gets the second-best – and most private — cabin on this plane.

El Al’s latest Boeing 787 Dreamliner is taking the airline to new heights, especially compared to the outdated 747s and 777s that it replaces.

Even coach received an amenity boost — every seat features on-demand entertainment and USB-A charging ports, along with a winged headrest and other Dreamliner-exclusive updates, like larger windows and lower cabin altitude.

If you associate El Al with outdated cabins and a subpar inflight experience, it’s time to give the airline another try. The latest Dreamliners are waiting for you.