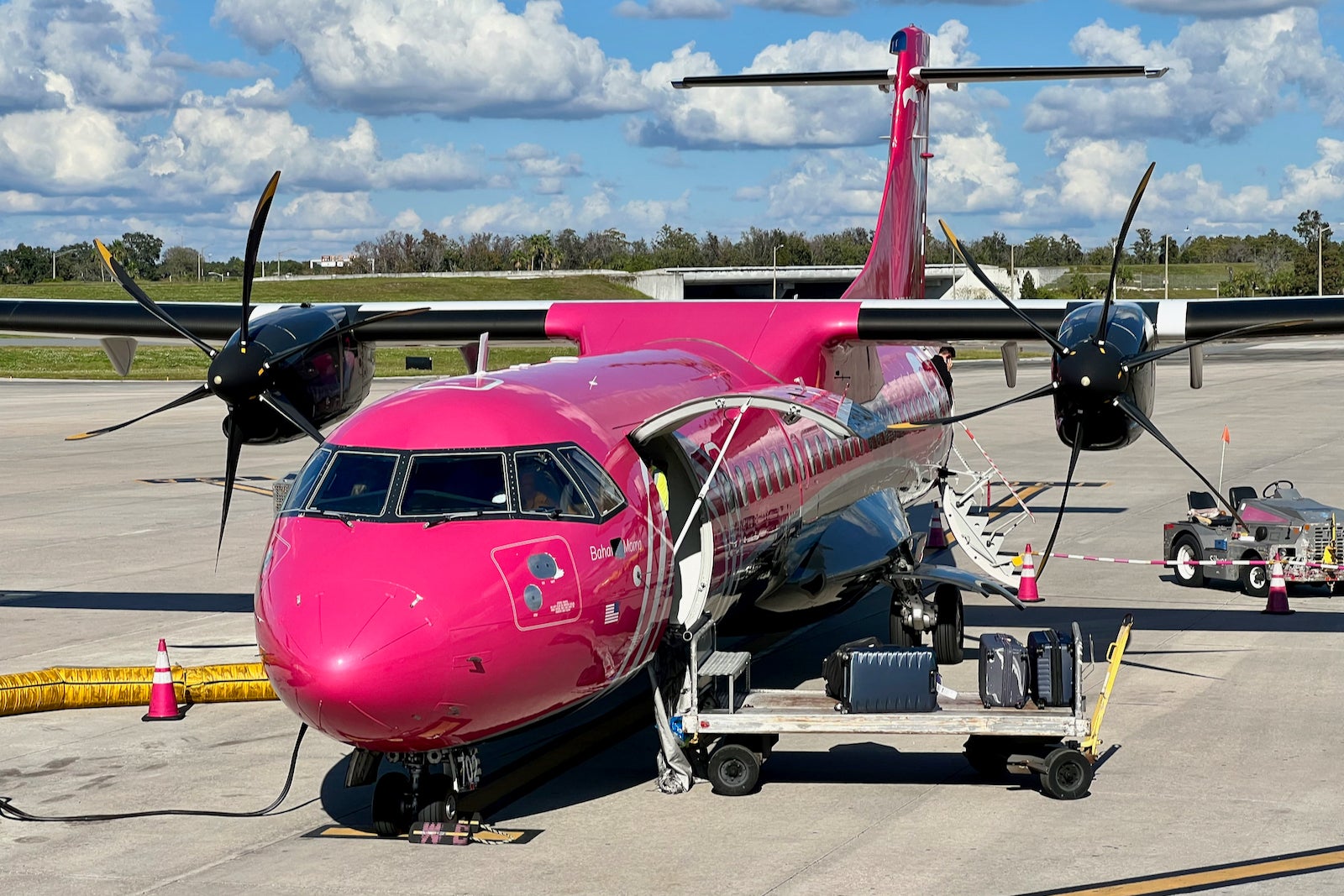 Growing up in South Florida, there was always one small airline with a few hubs across the state that I never knew much about.

Turns out, that airline — Silver Airways — is a small but mighty player in the region, serving 28 destinations across the southeastern U.S., as well as in the Caribbean through its subsidiary, Seaborne Airlines. Silver Airways has 14 turboprops in its fleet, 10 of which were manufactured by ATR.

Silver isn't a member of a major global alliance, though it has partnerships with some of the nation's largest carriers, including American, Delta and United, allowing you to purchase connecting itineraries with flights operated by Silver directly on those airlines' websites.

I’ve flown with Silver once before, over five years ago, so I’ve been keen to check them out again – especially after they took delivery of the ATR 72-600.

That opportunity came after taking Avelo Airlines’ inaugural East Coast flight from New Haven (HVN) to Orlando (MCO). Instead of turning around to head back up north, I flew on to Fort Lauderdale (FLL) on none other than Silver.

Though Silver Airways might not be a household name, purchasing a ticket on the airline is no different than with a major carrier.

The airline’s inventory is available across the major online travel agencies, including Google Flights. Alternatively, you can book a segment directly on the airline’s website, silverairways.com.

Another popular way to book a ticket with Silver is through one of its partners, including American, Delta, JetBlue and United. These airlines sell connecting flights on Silver metal on certain routes.

In my case, I purchased a multi-segment trip from Orlando to Fort Lauderdale, and then from West Palm Beach (PBI) to Newark (EWR), on a single United-issued ticket for $307.

The fare breakdown for the Silver segment totaled $149. I earned 1,474 redeemable miles, worth $19 according to TPG's valuations, but no credit toward Premier elite status (United doesn't award Premier qualifying progress from Silver flights).

Note that Silver operates as a low-cost carrier, and you'll need to purchase checked bags and seat assignments depending on which of the airline's three fares you purchase – "Escape," "Freedom" or "Refundable" – per the chart below.

Checked bags start at $30, and seat selection generally costs $4 for flights shorter than 90 minutes, and $8 for longer flights.

Note that my United-issued ticket was subject to United's change and cancellation fee structure because it was issued by a partner. Additionally, I received a complimentary seat assignment during the check-in process. Had I wanted to pay for a seat assignment, I would have needed to call Silver, since its online portal would not allow me to manage my booking with my United-issued ticket.

My experience with Silver began after taking the people mover from Orlando’s A Gates (where I had landed with Avelo) to the main check-in and ticketing concourse.

There, I quickly found Silver’s check-in counter located on the B side of the concourse, right next to United’s desks.

Only a handful of people were ahead of me, so I managed to collect my boarding pass within minutes.

Web check-in is also an option for those flying with Silver, though the carrier doesn't appear to offer a mobile app.

With my boarding pass in hand, I made my way to security — and thanked my lucky stars that the airline participates in TSA PreCheck. The wait for the general security line was estimated at greater than 30 minutes, which was a bit surprising for a Wednesday afternoon departure from Orlando during the school year.

By contrast, the line for PreCheck was dramatically shorter, though I used the Clear kiosks to proceed through even faster.

After another ride on the people mover, this time to gates 1 through 29, I was in the Silver Airways departure concourse.

I had about an hour before my flight, so I visited The Club at MCO using my Priority Pass Select membership, which comes included with a handful of premium credit cards.

The lounge wasn’t large — it only had two rooms — and it was overcrowded.

I managed to snag a small table near the cordoned-off buffet to catch up on some last-minute work.

I didn’t have the appetite to partake in the lounge fare, but options included hummus with pita, chicken soup and The Club’s signature candy towers. All food was served by an attendant due to COVID-19 protocols.

As boarding time grew closer, I made my way to Gate 13, Silver’s dedicated gate at Orlando International Airport.

Boarding began on time at 3:30 p.m., with rows one through five invited to board first. Silver loads its ATR 72-600 turboprops from the back to the front.

Despite sitting in row six, I boarded first to maximize my chances of getting good cabin shots.

I walked through the jet bridge, noticed (and appreciated) the rack of umbrellas in case of inclement weather and then walked along the ramp to reach the waiting turboprop.

Silver’s ATR 72-600 fleet is outfitted with 70 seats, arranged in an industry-standard 2-2 configuration.

Boarding was conducted via the rear door, giving those seated in the back the advantage of being first off the plane when we landed.

The bulkhead was the only exit row on the plane, affording passengers a bit more legroom than the 29 inches of pitch in the standard seats.

The remaining seats were all similar — there were no missing windows on the aircraft, and there weren’t any other extra-legroom seats. The seats were slimline and quite uncomfortable, though hardly a massive inconvenience for a 60-minute flight.

Seat width was generous at 20 inches, but the armrests were some of the narrowest I’ve seen, measuring under two inches wide.

The recline was generous, too, but it was hardly enough to compensate for the minimal seat-back padding.

There was a mesh storage pocket behind each seat, as well as one of the tiniest tray tables out there — 14 inches wide and just 6.5 inches long, barely big enough to fit my iPhone 13 Pro Max.

The overhead bins were actually quite large and capable of fitting many standard-size rollaboards.

According to the gate agent, my Tumi Continental expandable carry-on wouldn't fit, so I was forced to gate-check it — meaning that it would be available for pickup by the plane door upon landing.

There was one lavatory located at the back of the cabin, which was a tight fit for my 5-foot-11-inch frame.

Silver’s average flight distance is 230 miles, according to Cirium timetables, so it makes sense that the airline doesn’t offer much in the way of onboard amenities.

There are no power outlets or USB ports, and no Wi-Fi network or streaming inflight entertainment.

The only amenities, so to speak, are the safety card in the seatback pocket and the window views that you’ll get on clear days.

Consider yourself warned: If you’re flying with Silver, be sure to pack your own snacks.

Once we crossed through 10,000 feet, a flight attendant came through passing around small, eight-ounce bottles of water.

No other snacks or drinks were available, and this doesn't appear to be a pandemic-era cut. In TPG's 2018 review of the airline, the reporter was also served a similar small bottle of water.

As far as run-of-the-mill regional hops go, Silver checked all the boxes: an on-time flight, clean cabin and a small water bottle.

The two flight attendants on this flight were friendly enough. Each passed through the cabin once to collect trash, though they didn’t seem particularly excited to be working that day.

Other than the trash collection, they chatted in the rear galley for the duration of the flight. Additionally, my welcome and goodbye greetings were met with a curt smile.

Sometimes the best domestic flights are the ones you won’t remember. You get to your destination as scheduled – and you quickly forget the flight experience.

With Silver, that’s exactly what happened. While the airline itself offers a unique network, the inflight experience largely resembled that of any other low-cost carrier.

The seats weren’t particularly comfortable, there was very limited service and the service provided was wholly unremarkable.

Would I fly with Silver again? Absolutely. It was a perfectly pleasant way to spend an hour hopping across the Sunshine State.

Related stories
Chasing elite status on Alaska Airlines? A flight to California this fall could help
Flights to Auckland starting under $700 round-trip
The ultimate guide to earning elite status with United cards
American Airlines forgot it had landing slots at JFK. Then it lost some of them
Featured image by Zach Griff/The Points Guy
Editorial disclaimer: Opinions expressed here are the author’s alone, not those of any bank, credit card issuer, airline or hotel chain, and have not been reviewed, approved or otherwise endorsed by any of these entities.