Want to fly from New York to London in less than four hours? Hear from the company who could make that happen 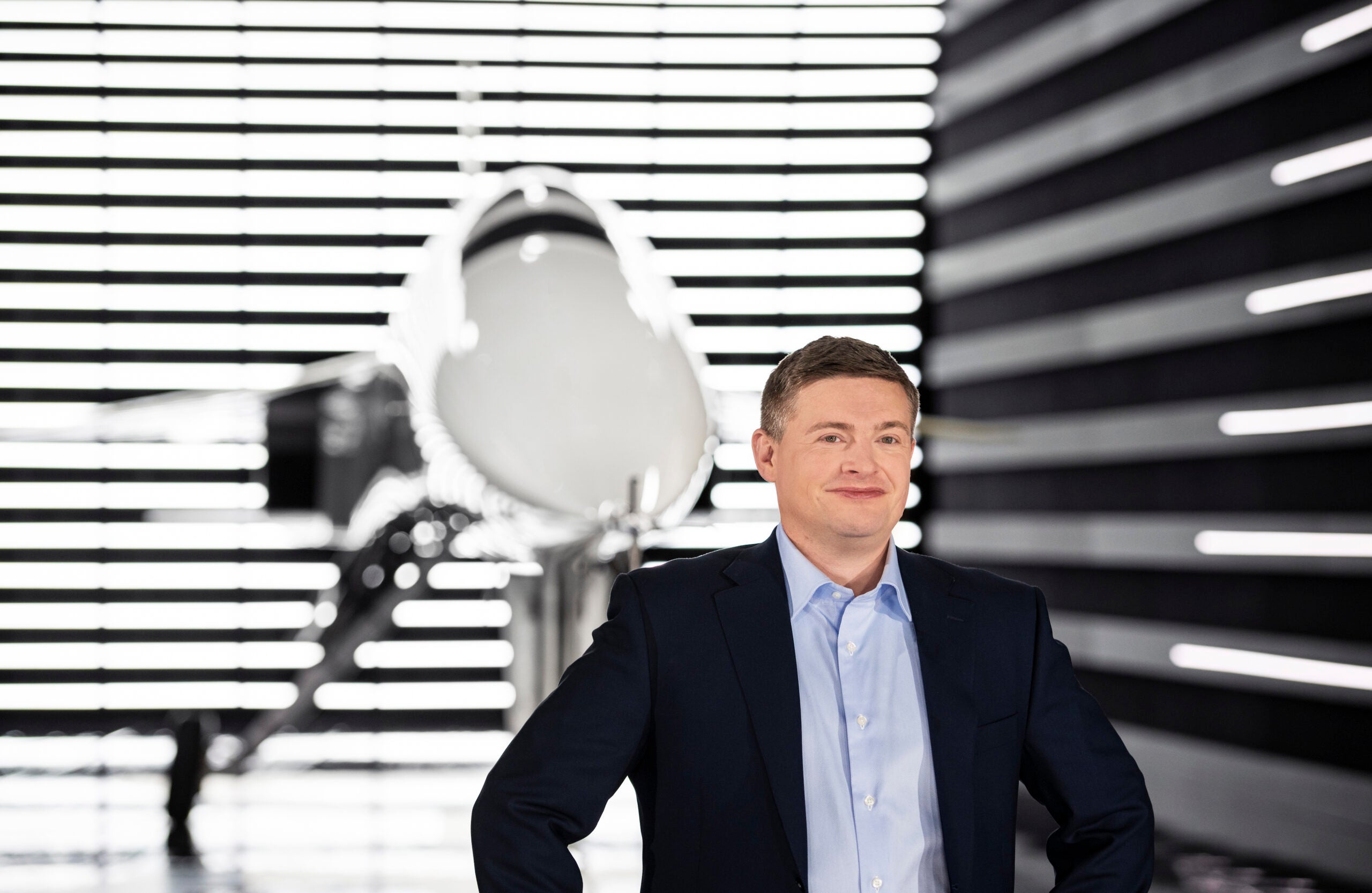 This December marks 117 years since the Wright Brothers first took to the skies, and the aviation industry has undergone massive changes since that fateful first flight. However, since the dawn of the passenger jet age in the late 1950's, we've seen more incremental steps forward — such as the development of composite-material planes like the Boeing 787 Dreamliner and improvements in fuel efficiency — rather than massive leaps.

One company, however, is hoping to change that trajectory, ushering in a new approach to mainstream air travel — one that could see you flying from New York to London in half the time it takes today.

As part of Airlines Week at the 2020 TPG Awards, we sat down with Blake Scholl, CEO of Boom Supersonic on a special edition of our Future of Travel webinar series. His company's goal is simple: Launch a supersonic jet (Overture) by the end of the decade capable of halving travel times on major international routes.

Oh — and these flights will be carbon-neutral as well.

It may sound like something out of a science fiction novel, but it's taking place at a real company outside of Denver, Colorado, and Blake took great care in discussing what this looks like.

Here are some of the key takeaways from our conversation.

How is Overture different from Concorde?

Most travel enthusiasts are aware of Concorde, probably the best-known passenger jet that flew at supersonic speeds. However, those planes last took to the skies in 2003. While Concorde is remembered fondly by those who flew it, only 14 of the planes ever operated commercial flights — and it never turned a profit for the two airlines that ultimately put it into service (Air France and British Airways).

Today, those jets are relics, relegated to museums around the U.S. and Europe.

Blake highlighted how Boom Supersonic is a completely different animal.

"I think it helps to remember that we're all basing our view of supersonic off an airplane that was designed 60 years ago," he said on the webinar. "But, fast forward ... and now we have a very different world. We have new technologies. We've got carbon fiber composites. We've got turbofan engines. We've got software-defined aerodynamics."

When you combine these capabilities with the incredible growth of international air travel (outside of a global pandemic), this creates an opportunity for a profitable supersonic jet that's affordable to millions of travelers.

"This isn't just a New-York-to-London, banker-and-rock-star machine but is something that can work on hundreds of routes worldwide that can reach economies of scale. This story turns out to be very different from Concorde."

What about the noise of supersonic flight?

Brian pointed a key criticism of supersonic air travel — one that dogged Concorde — was the noise. Several viewers also chimed in with questions about how Boom would handle this, and Blake acknowledged that it was a concern. However, he once again highlighted the technological advancements that would partly address this issue.

Concorde "had after-burning engines," he said. "They were taking a military engine and adapting it to a commercial flight." However, technology has pushed that approach to the history books. Turbofan engines, like what will be found on Overture, also have the capability to go supersonic — as long as you "have enough thrust to overcome the drag."

The end result? Engines that are "far quieter and far more efficient than Concorde."

But what about that sonic boom, when Overture crosses the sound barrier?

Well, that's not going anywhere — for now. Which is why the first iteration of Overture will focus solely on overwater routes. "You basically bee-line off the coast, you open up the throttles and you make your sonic boom where there's no one there to hear it."

What is the timeline for passenger service?

At the outset of the webinar, nearly half of the attendees said they were most interested in the timeline of when Overture would be ready for commercial passenger flights — and sadly, it's not around the corner. Boom just debuted its XB-1 prototype in October (you can view the full launch video on the company's website), but even that won't take to the skies until 2021.

So what's happening with the XB-1 right now? Testing ... lots of testing.

"We have 36 independent ground tests planned," Blake said, looking at all aspects of the plane — from the hydraulic system to the landing gear to the electrical power system.

From there, it's a series of taxi tests outside of Denver in early 2021, and after that, the XB-1 will be taken to the Mojave Desert (via truck) for higher-speed testing on the runway before actual takeoff. If all goes according to plan, these test flights will begin in Q3 or Q4 of next year, and the company will incrementally ramp up to supersonic speeds.

Based on the results of these myriad of tests, Boom will then finalize the design of Overture, the aircraft that ultimately will carry passengers.

"Think of Overture as about five years behind XB-1," Blake said. "This year we rolled out XB-1, and in 2025 we'll roll out the first assembled Overture. Then we'll start the flight test program for Overture in 2026."

The big unknown, however, is just how long the certification process will take, though Blake expects that it'll be longer than before due to the Boeing 737 Max situation.

That said, Blake hopes to welcome the first passengers onboard Boom in 2029 — less than a decade from now.

The last several years have seen significant enhancements to the onboard experience for passengers — with new first-class suites and the standardization (for the most part) of lie-flat seats in business class. For Boom, however, the development of Overture represents "an opportunity to build a brand-new cabin experience," said Blake.

Air travel can be stressful, but "we want you to experience a sense of tranquility from the moment you get on board the aircraft," he added

And he teased some of what this might include:

However, he did indicate that lie-flat seats weren't going to be standard — and pointed out that with the shorter travel times, they wouldn't be necessary. By turning red-eye flights into shorter, daytime flights, "you don't need a flat-bed seat," according to Blake. Instead, "you really need a comfortable seat, and that's how you can increase the passengers the airplane can carry, and that's part of how you make the economics work" for those carriers operating the aircraft.

He also had an interesting take on the prevailing perspective of the onboard set. "We think about flat beds and a function of route, but it's really a function of time." By cutting down flight times, Boom hopes to shift this mindset.

What about the environment?

Before and during the webinar, we received many questions about the environmental impact of flying at supersonic speeds, so we took the opportunity to discuss Boom's approach along these lines. Sustainability is one of the company's core values, but how does that translate to the actual operation of Overture?

For starters, "this is the first airline designed from the ground up to run on 100% sustainable, alternative fuel," Blake said — which allows your flight to actually be carbon-neutral. "You're using all fuels that were built out of carbon that was removed from the atmosphere, and so when you burn it, you put it back where it came from — and it's zero net carbon on a life cycle basis."

He even indicated that tests on the XB-1's engines saw better performance with alternative fuels than with standard jet fuel, an exciting aspect of the development of Overture from an environmental perspective.

Related: What your favorite airlines and hotels are doing to fight climate change

If you want to hear more of Brian and Blake's conversation, you can watch the full recording right here.

“The Future of Travel with Brian Kelly” is a series of live events looking ahead at what’s in store for the travel industry as it begins to recover from the coronavirus pandemic. Join Brian as he interviews top experts and company executives on a range of topics, including traveler health, cleanliness measures, loyalty programs and what it all means for the traveling public.

For recordings of past sessions, please visit the following links: