Articles
David Slotnick is a senior aviation business reporter at TPG. He covers anything and everything to do with the business of running an airline.
Follow
Oct. 06, 2021
•
9 min read 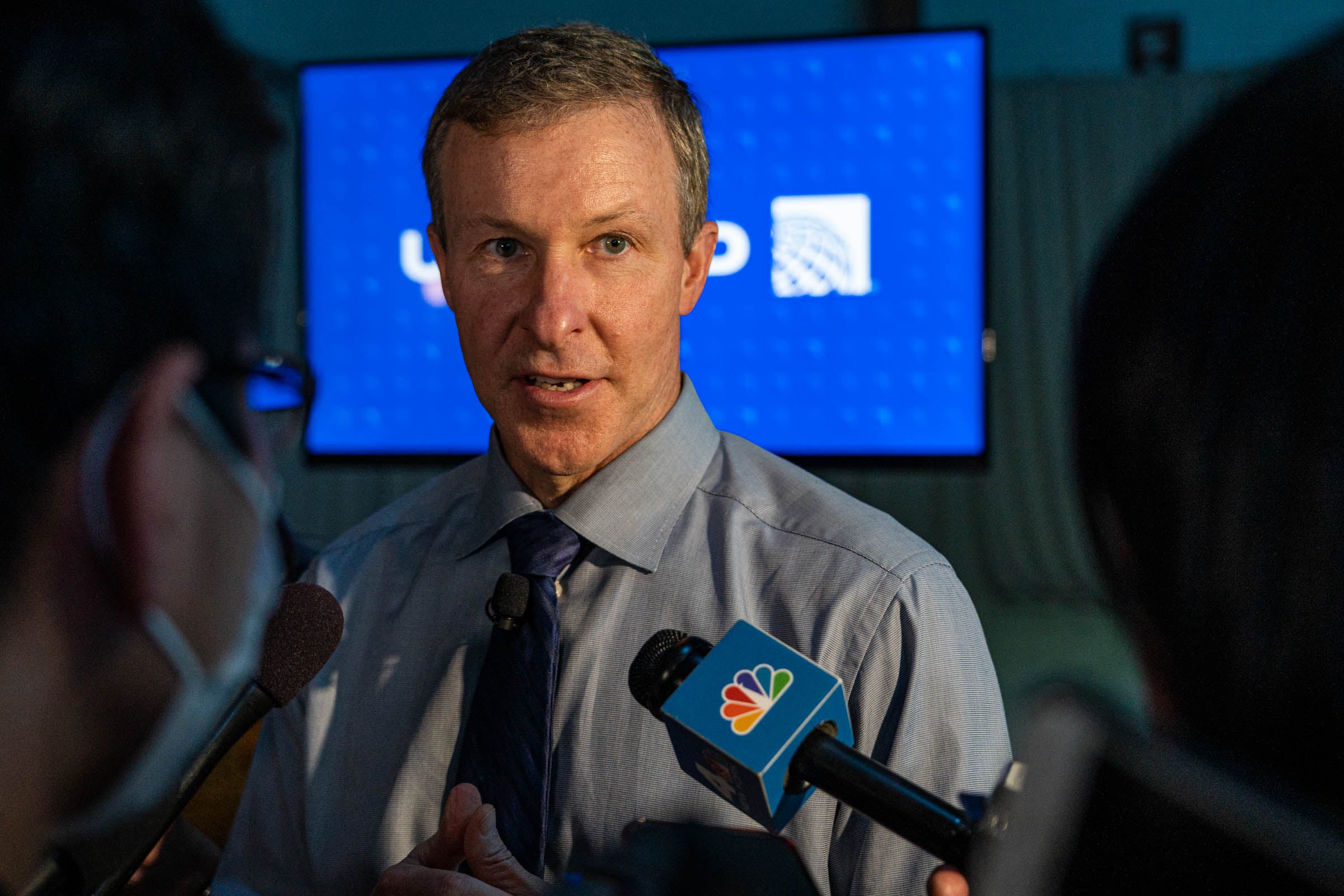 United Airlines just saw its strongest bookings week since the start of the pandemic — suggesting that the setback airlines saw from the rise of the delta variant is beginning to recede (other airlines saw similar improvement).

It came as the airline was receiving media coverage and praise from around the globe for its vaccine mandate, which saw more than 97% of employees vaccinated, and just a few hundred of its 67,000 U.S. employees unwilling to meet requirements.

Meanwhile, United rivals American Airlines and JetBlue, which have partnered together to try and present a United front against United and Delta in the Northeast, were hit by an antitrust lawsuit by the Department of Justice.

All in all, it's been an interesting couple of weeks for United Airlines CEO Scott Kirby.

"It's kind of entertaining," he told TPG in an interview at the annual meeting of the International Air Transport Association, referring to the American/JetBlue situation. "I like our hand."

With United seemingly on a roll, with wins in the media, good news on the business front, and a United States that's preparing to lift restrictions on international travelers, it's a pretty good time for Scott Kirby. A good time that he has barely had a chance to enjoy as CEO of the airline.

Kirby took the helm in May, 2020, barely three months into the pandemic — his succession of Oscar Munoz was first announced in December, 2019 — as the air travel industry and the world as a whole were still at a virtual standstill.

For Kirby, that's meant navigating the company through the worst crisis to ever hit the airline industry. But now, nearly two years later, the light at the end of the tunnel might be starting to glow on the horizon.

The data that Kirby has seen coming in is good, but early; the positive turn in direction is only weeks old.

Nevertheless, it's the trend that everyone in the industry wants to see.

More on United: 99.5% of employees have now complied with the vaccine mandate

"Business travel is now back to levels that are [the same] as what they peaked at before the delta variant started at the end of June," Kirby said. "And I think it'll really pick up in January."

There's still a ways to go, of course.

"We still need office towers, people back in office buildings, to really get business travel going."

A major theme at the IATA conference was figuring out a way to fix the hodge-podge of travel requirements, restrictions and documents required by different countries for travel.

The IATA Travel Pass, naturally, was talked up, and delegates urged countries to work together to reach a consensus on vaccination and testing requirements.

Kirby said that it would be great if that happens. But he isn't waiting for it.

"I'd love if there was an IATA pass or something that was universally accepted," he said. "But I'm not holding my breath that that will happen."

United was the first U.S. airline to build functionality into its app and online tools to upload and store vaccine documentation and test results, although other airlines have been working to add similar functionality. Since airlines are enforcing the bulk of it, Kirby says, that's good enough, and makes things easier for passengers.

"We've tried to focus on making it easy for customers, so that you can upload whatever documentation you need. to get your boarding pass before you leave for the airport," Kirby said. "Just trying to make it easy under the presumption that there will never be a common, endorsed solution."

Related: Your guide to vaccine passports

"It'd be great if there was, but we're prepared for that to never happen."

As for the differing requirements, Kirby thinks that bookings data so far shows that people are willing to put up with the inconvenience for now.

"I think that business travel can come back without a uniform system," Kirby said. "It's a pain in the butt, but if you need to go, if you've spent 18 months and you haven't seen your partners across the Atlantic, we make it relatively easy."

What's Next for United

In June, United launched a campaign titled "United Next," which it described as directing the airline's post-pandemic development.

As part of the program, the airline ordered 270 new narrow-body aircraft, unveiled a new cabin interior for those planes, and said that it would retrofit its entire existing narrow-body fleet by around late-2025.

As part of its strategy, United plans to upgauge numerous markets from older regional jets to newer, larger, but more efficient mainline aircraft.

“We’re still going to fly 50-seat jets to small communities throughout the country to make sure they’re still connected to our global hub network,” airline chief commercial officer Andrew Nocella said in June. “But we’re no longer going to use small jets to fly to large communities.”

How committed United remains to that 50-seat market remains undecided.

"We're still debating what the long-term future of 50 seaters really is," he added. "The challenge is, do you want to serve places like Erie, Pennsylvania, at all, or Cody, Wyoming, or do those places just get cut off of the connectivity to the world?"

The debate is particularly acute due to congestion at hub airports, particularly Newark (EWR) in the New York City metro area, where each incoming small plane uses up a scheduled landing slot.

"They're just not big enough to fly big airplanes to," Kirby said.

Even with reduced flight frequencies using bigger aircraft, those cities could be effectively cut-off from the international networks.

"We're struggling with that, we feel some obligation to keep the communities connected, but the economics ultimately aren't going to work, and pilot shortages — you know, they're getting squeezed."

Related: What it’s like flying United’s new CRJ550, possibly the most comfortable regional jet in the US

"There are some cities that are big enough that we could serve with bigger airplanes, but there are some places that just aren't large enough," he said.

Kirby stressed that vast changes weren't imminent — it's more a consideration of the long-term business model.

"There are some places that can only be served economically with 50-seaters, but as the economics of 50-seaters are changing so radically, it calls into question what the answer is. And we don't have the answer yet."

"But the current system is challenged."

JFK will go back to premium

For those looking forward to flying United trans-continental from JFK, Kirby has good news. The airline plans to return its premium-heavy "high-J" Boeing 767 to the JFK routes as soon as business travel picks back up a little further. United switched the aircraft flying those routes to Boeing 757-200s with nearly the same number of seats, but a lower proportion of premium seats.

United also decided to pull the longer-range 767s from the route so that it could slot them into different parts of its network.

Don't miss: United’s big order reveals two major insights about the airline and the aviation industry as airlines look beyond the pandemic

The bolster to its long-haul fleet was particularly helpful given the prolonged grounding of one of United's 777 subfleets, following an engine failure earlier this year. Fifty-two of the 777s — all with Pratt and Whitney 4000-112 engines requiring inspections — are grounded, while 44 of its other 777s, all with GE engines, remain in service.

"Really the issue that drove [the equipment switch on the JFK routes] is that with 52 of our 777s grounded, we're scrambling to put the network together with wide-bodies," Kirby said. "We have to sub-optimize the network until those airplanes get back."

Kirby declined to speculate on a timeline for the subfleet's return.

"We feel good about how the process is going."

With the worst of the pandemic hopefully — though not definitely — in the rearview mirror, Kirby said he's excited for the next chapter of his time heading United.

"This has been a phenomenal opportunity for the company to change the culture," he said, referring to a customer-first and practicality-driven mindset he has spoken of during his tenure — for example, doing away with delay codes to help different teams work together better before departures.

"We're going to be getting back to growing," he added, "and the investment in United Next, and the great product, and all of that, but it's really about changing the customer experience at United."

Featured image by United CEO Scott Kirby speaks with media at a June 29, 2021 event in Newark. Photo by David Slotnick/The Points Guy
Editorial disclaimer: Opinions expressed here are the author’s alone, not those of any bank, credit card issuer, airline or hotel chain, and have not been reviewed, approved or otherwise endorsed by any of these entities.