How to snag an exit-row seat when flying U.S. carriers 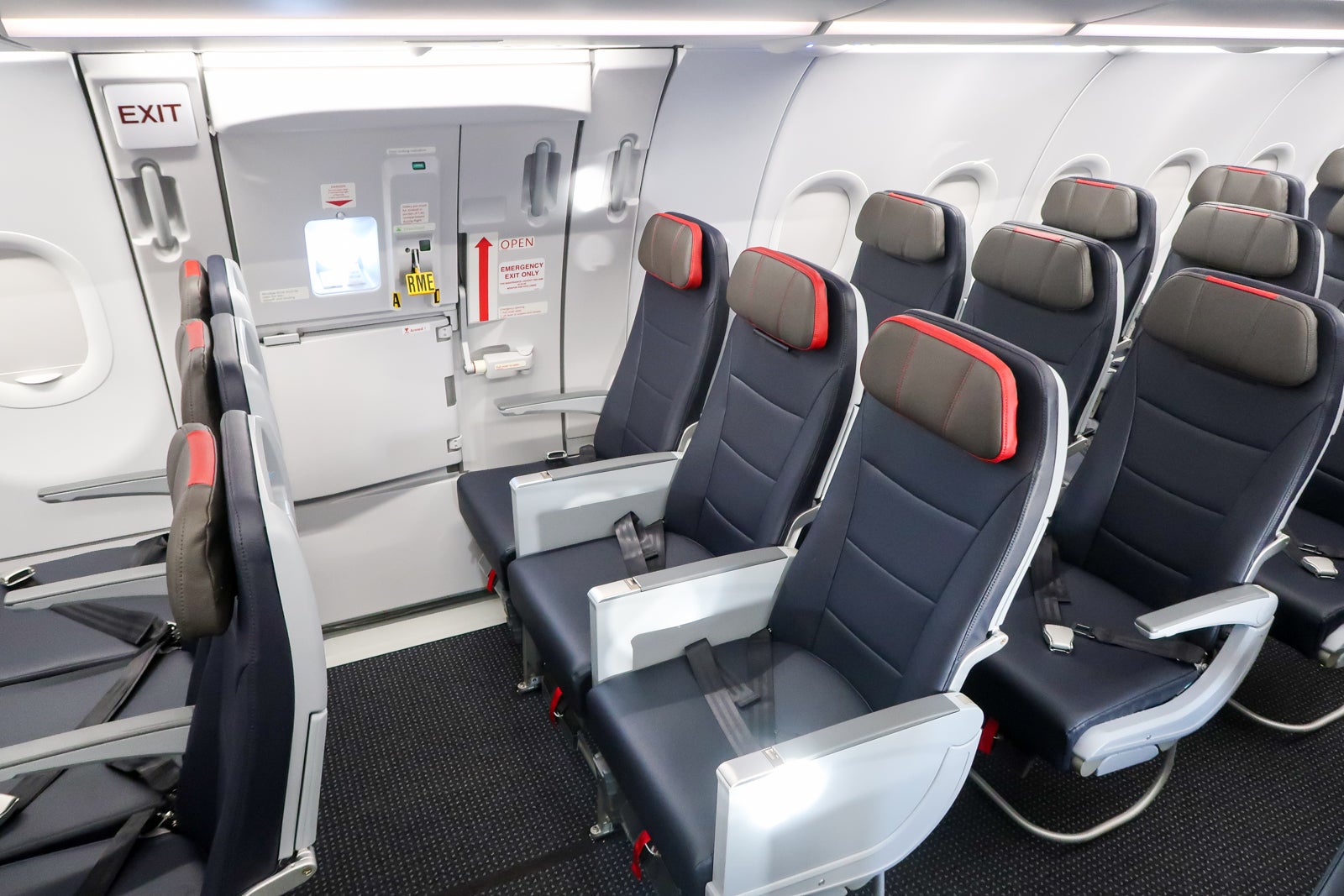 Whether you are 6'7" like TPG founder and CEO Brian Kelly, or you simply want more space, you might want to book an exit-row seat for your next flight.

With tight seat pitch in economy on many airlines, travelers covet exit-row seats for the extra legroom they often provide. Many airlines allow flyers who have elite status to select exit-row seats for free either at booking or at check-in. But there are often ways for non-elites to snag these seats as well.

Although exit-row seats have their benefits, there are also downsides. For example:

So, consider the tradeoffs. And, of course, you can only sit in an exit-row seat if you're willing and able to assist in case of an emergency. But, if you'd decided you want an exit-row seat, today I'll discuss how to snag one on 10 popular US-based airlines.

Alaska's website states that only Alaska Airlines Mileage Plan elite members can reserve exit-row seating in advance. Non-elites can check-in as usual and then ask any customer service agent at their departure airport about exit-row availability. But, doing so is only likely to get you an exit-row seat occasionally.

Non-elites looking to snag exit-row seats in advance will want to fly Alaska's A321 aircraft. On this aircraft type, Alaska usually classifies exit-row seats near the plane's rear as Saver seats.

If you need extra space but can't snag an exit-row seat on Alaska Airlines, you could purchase a Premium Class seat after selecting a Main or Saver fare. Although Premium Class usually doesn't include exit-row seating, it does provide four extra inches of legroom and a complimentary drink.

Allegiant Air charges between $0 and $80 to select a seat during booking. However, on most routes I checked, the price to reserve an exit-row seat at booking was between $16 and $29.

Related: Southwest vs. Allegiant: What it’s like to fly a low-cost airline during a pandemic

If you don't have elite status with American Airlines or select Oneworld partners, you can still pay to select Main Cabin Extra or Preferred seats, including exit rows. Plus, Main Cabin Extra seats come with complimentary beer, wine and spirits on flights with full beverage service.

Prices vary for Main Cabin Extra seats depending on the route. But, prices are seemingly the same regardless of date or whether you get a window, aisle or middle seat. For example, for a flight from Chicago (ORD) to Los Angeles (LAX), exit-row seats cost $95. And for a short hop from Washington (DCA) to Portland (PWM), exit-row seats cost $43.

Delta’s designates most exit-row seating in the economy cabin as Preferred Seating. But, you can also snag extra legroom in Delta's extra-legroom Comfort+ seating, which the carrier technically sells as a separate class of service. And you can purchase Preferred or Comfort+ seating on any Main Cabin ticket.

On the Boeing 767-400, a widebody jet Delta uses on many transcontinental, European and South American routes, exit-row seats are only available in one row and sold as Preferred Seating. I checked the JFK to LAX route on several dates and the buy-up to a Preferred exit-row seat was $159. However, the cost of a Comfort+ seat with extra legroom ranged from $139 to $179. So, many passengers looking for extra legroom might prefer the Comfort+ seat over the exit row.

For a short-haul route from Atlanta (ATL) to Savannah (SAV) on Delta's Boeing 717-200, you can select exit-row seats with limited recline on a Main Cabin fare for no additional cost. However, for flights on this route operated by Delta's CRJ900, exit-row seats (including some with limited recline) cost $9. Alternatively, you can select Comfort+ seats with extra legroom on both aircraft types for a modest amount that ranged from $14 to $19 on several dates I checked.

Frontier Airlines sells Stretch Seating that has five to seven more inches of legroom than standard seats. Stretch Seating costs between $35 and $70 per flight. Frontier says that purchasing seats at booking provides the best price.

Frontier's aircraft generally have Stretch Seating in the first couple rows that provide 36" of legroom and exit-row seating that provides 38" of legroom. There are two consecutive exit rows on some Frontier aircraft, but Frontier only marks row 13 as Stretch Seating. After all, row 12 has extra legroom but isn’t pre-reclined. So, if you don’t mind not being pre-reclined, row 12 may present an opportunity to get extra legroom at a discount.

However, you can purchase an upgrade to Extra Comfort and Preferred Seats at booking or after booking as long as you didn't buy a Main Cabin Basic fare. A Preferred Seat on a neighbor island flight costs just $10 per passenger each way. But, Extra Comfort Seats on A321 and A330 routes vary in cost.

JetBlue's exit rows are all sold as Even More Space seats, which have up to seven inches more pitch than standard JetBlue seats.

Southwest does boarding and seating a bit differently. No one is assigned a seat, so there's no way to reserve an exit row. Instead, you merely select whatever available seat you want when you board.

Southwest determines boarding order by the order you sign in when check-in opens 24 hours before departure. But, even if you check-in immediately, Southwest elites and those who purchase a Business Select fare, Upgraded Boarding or EarlyBird Check-in will be ahead of you.

If I check-in precisely 24 hours before departure or purchase EarlyBird Check-in, I'll usually be able to snag an exit-row seat. But, I might end up in a middle seat or have to argue with someone who is attempting to save a seat.

Related: Everything you need to know about the best seats on Southwest Airlines

TPG founder and CEO Brian Kelly enjoyed Spirit when he flew in an exit row from Havana to Ft. Lauderdale in 2017. Regular seats, including exit-row seats that provide up to 10 inches more legroom, cost between $1 and $50 to reserve. The specific cost varies based on route and seat location.

In some cases, Big Front Seats will be a better value than exit-row seats. Big Front Seats cost $12 to $150 when purchased in advance and $25 to $175 when purchased onboard. These seats provide 36" pitch and 18.5" width, which makes them similar to domestic first-class products offered on other U.S. carriers.

For example, here's what seat costs currently look like on a flight from ORD to LAS in May:

Big Front Seats and exit-row seats sometimes sell out. So, it's best to purchase your seat early if you're sure you want the extra space.

Related: Why having the Spirit Airlines credit card isn’t crazy

The cost to reserve Preferred or Economy Plus seating varies. For example, for a United 757-200 flight between EWR and SFO in May, exit-row seats range from $19 to $139. The first row of exit-row seats is classified as Preferred seating due to limited or no recline and costs $19 to $29 to reserve. The second row is classified as Economy Plus seating and costs $134 to $139.

Since United elites and subscription members will snag the best seats as departure nears, it's best to purchase exit-row or Economy Plus seats when you book if you know you want the extra room.

If you're tall or simply want extra legroom, exit-row seats can make your economy flight much more comfortable. As shown in this guide, almost every airline will charge you to reserve exit-row seats. Of course, you can always try asking nicely for an exit-row seat at the airport. Although asking will sometimes net you an exit-row seat, it's better to plan ahead and pay if you want to guarantee yourself an exit row.

Be sure to understand the details of the seat you're paying to reserve, though. If there are two adjacent exit rows, usually the seats in the first row won't recline. Some aircraft may have exit doors that restrict the legroom of the passenger in the exit-row window seat. Other airlines, like United, discount the price of these sub-optimal exit-row seats, while others will sell them at full price. And, remember: some airlines sell seats that may be more comfortable than exit-row seats at a similar price — such as Spirit's Big Front Seat. So be sure to check all your options before simply assuming the exit row is the best place to sit in economy.

Related stories
A solid option for American loyalists: AAdvantage Aviator World Elite Business Mastercard review
Is the Amex Business Platinum worth the annual fee?
Maximize your points: Why you should consider redeeming Hilton points abroad
The 18 best places to travel in 2023
Featured image by (Photo by JT Genter/The Points Guy)
Editorial disclaimer: Opinions expressed here are the author’s alone, not those of any bank, credit card issuer, airline or hotel chain, and have not been reviewed, approved or otherwise endorsed by any of these entities.