Ticket to Paradise: A Review of United Economy on the 737 From Newark to Nassau 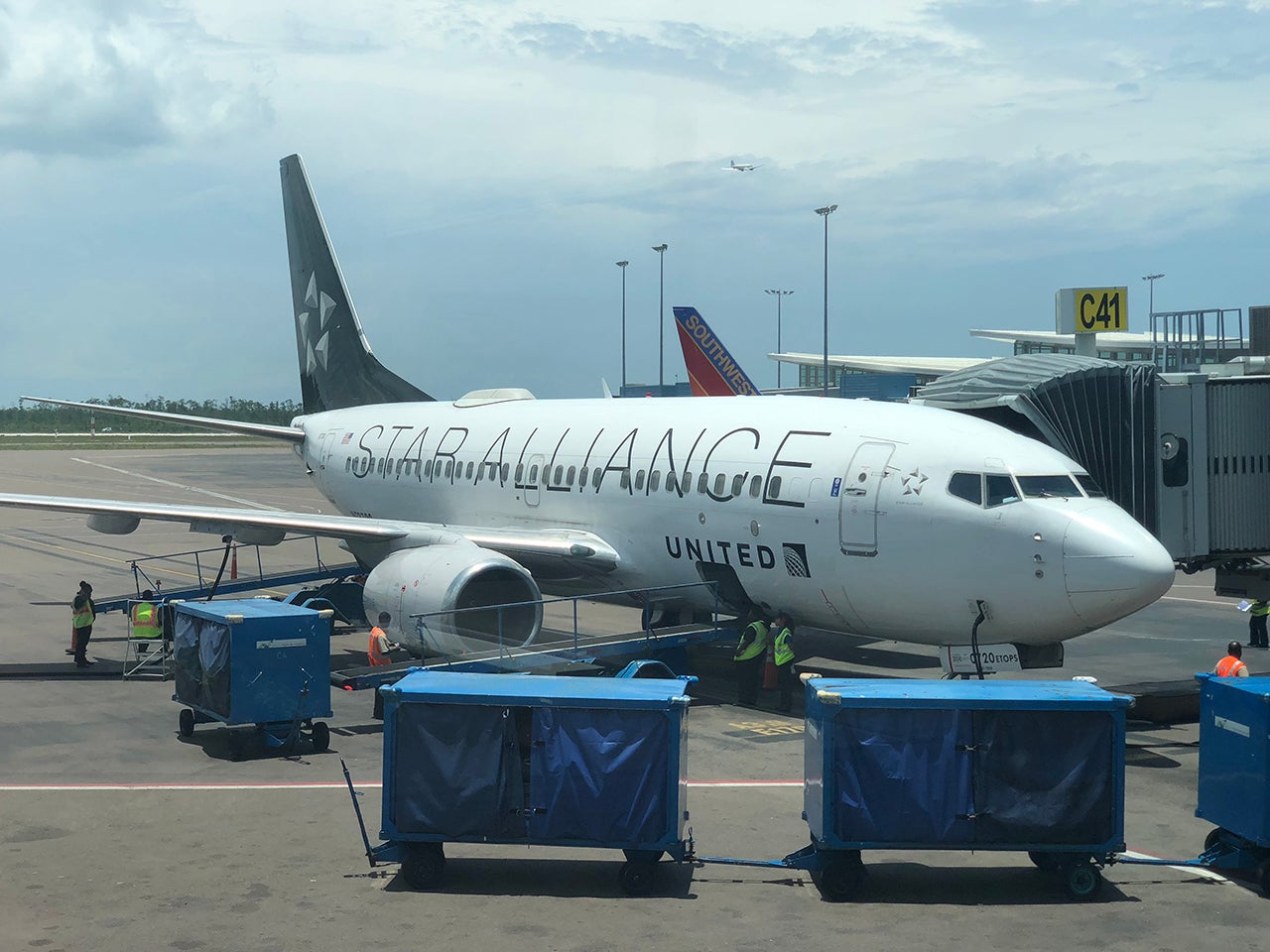 I’ve had my eyes on Baha Mar — the sprawling resort complex that has been slowly opening in stages — since 2015. And when the ribbon was finally cut in May at the third and final hotel, the Rosewood Baha Mar, I couldn’t wait to hop on the first flight down there to see the fully opened property. Newark Liberty International (EWR) is my preferred airport, so I was delighted to find United’s daily nonstop flight to Lynden Pindling Airport (NAS) in Nassau, Bahamas, was still available.

On certain routes, it really doesn’t matter if you have status (disclosure: I don’t) or can afford a premium seat (another disclosure: I can’t). On short-haul flights like this one, what matters most is how quickly you get to where you’re going.

Delta Air Lines, JetBlue and United all offered nonstop flights from the New York City area to Nassau, but since United flies primarily from Newark (EWR), it was something of a no-brainer. The flight left at 10:10am, and after the aircraft deplaned and was cleaned, it returned to EWR at 2:10pm.

If you have some more flexibility in your travel plans, you should be able to find saver economy awards for as little as 17,500 miles each way plus about $6 in taxes and fees. However, we booked my flight just over a day before I was to depart, so unfortunately no awards were available. Thus, we paid $846 for the round-trip flight. It was paid for with TPG's Platinum Card from American Express in order to take advantage of the 5x bonus category on airfare booked directly with the airline or through Amex Travel. In total, we earned 4,230 Membership Rewards points, which are worth about $80 according to TPG's latest valuations. In addition to the MR earnings, I walked away with a total of 2,192 Premier Qualifying Miles (PQMs), 695 PQDs and 3,475 redeemable miles.

Late-morning flights are usually ideal — you can sleep until a reasonable hour and make those last-minute packing decisions — but you have to be careful if you’re flying out of a New York-area airport. Traffic can be brutal in both directions, so I left twice as early as I would on a weekend or first thing in the am.

EWR is my home airport (at the right time of day, you can do the drive from my house in 15 minutes), making it by far the most convenient option for me. But I’m going to make a wildly unpopular statement: I actually really like Newark. It’s one of my favorite airports in the world. Sure, you won't find Singapore Changi-esque features there, but you can breeze through in no time at all. Plus, a spate of updates have outfitted the airport with complimentary high-speed Wi-Fi, plenty of seating and some not-at-all-unappealing places to eat and drink. It’s gloomy, but it’s home.

Unfortunately, this hub was the gloomiest of all when I flew out. Unless you're a premium traveler (which, in this case, I was definitely not) you had to check in at the lower level. I had checked in online the night before, but received one of those nausea-inducing alerts that I still needed to check in at the airport. So I went straight to one of the kiosks, only to be told my reservation could not be found. After a brief moment of panic, I tried again and was able to locate my reservation, and there I was — Seat 27E, squarely in the middle of a very ordinary 737-700.

Because I had carry-on luggage only, I was able to head straight to security, where I embarrassed myself by forgetting about a full 32-ounce water bottle strapped to my backpack. But I was still through security in 11 minutes, and it would have been faster if I hadn’t tried to drink all 32 ounces (I wasn't going to toss it!) before sending my backpack through the X-ray machine.

Flyers departing from Terminal C could visit the United Club, which is open to travelers with United first- or business-class tickets; passengers with first- or business-class tickets on a Star Alliance member; Star Alliance Gold flyers with eligible same-day boarding passes; or those who paid a $59 one-time entry fee. But because I was short on time and full of water anyway, I decided to head to my gate.

Like the check-in desk, Gate 97 was gloomy. There's simply no other way to describe it. While travelers at other gates could wait to board while watching planes navigate the tarmac, my gate was underground. No view of the plane. No view of anything at all.

Though the airline divided the cabin into five distinct boarding groups, the gate was, as usual, one thick mob of people standing as close to the gate agent as possible.

This United 737 featured just three rows of 21-inch-wide United first-class seats in a 2-2 configuration, all with a standard seat pitch of 37 inches and a seat recline of 5 inches.

The 12 first-class seats were followed by the economy-class cabin — which included both economy plus and economy seats.

Every seat through Row 23 featured in-seat power, but the final 10 rows of economy — including my middle seat in Row 27 — were all without charging ports.

The economy plus seats boast between 34 and 35 inches of seat pitch and 3 inches of standard seat recline and were a standard 17.2 inches wide. The regular economy seats featured the same amount of width but less pitch and recline — 31 inches and 2 inches, respectively.

I may have been able to snag one of the last available seats on the very full nonstop flight, but that didn’t help me when it came to seat selection. I ended up in the middle, between a friendly couple who had decided to forgo sitting next to each other in order to enjoy the preferable aisle and window seats. Good for them.

The navy blue leather seats with black accents felt fairly new and were clean but were about a basic as you could get. A seatback pocket filled with the usual safety card and a copy of the airline’s latest issue of (the fantastic) Hemispheres magazine — I flipped straight to an amusing Q&A with Jim Parsons.

The lavatory was as cramped as you would expect, perfectly predictable in every way. A slightly askew toilet, a bottle of United-branded foaming soap that was comically larger than the sink basin, and bright blue lighting that felt contemporary but didn’t really disguise the bathroom’s diminutive size.

Nothing says short-haul flight quite like a crumpled bag of pretzel twists. Yet for the brief flight time — under three hours and 15 minutes and 15 minutes ahead of schedule — it was nice to have something to munch on. Flight attendants also came around with complimentary soft beverages (is it strange that I still get excited when I’m offered an entire can?) and plenty of items for sale.

The flight to the Bahamas might've been short, but the lack of seatback entertainment or so much as a charging outlet was frustrating. The plane was equipped with Wi-Fi, so I could stream complimentary entertainment by way of United, but watching on the comparatively small iPhone screen wasn't exactly enjoyable.

In theory, I could have watched a selection of new releases including “Lady Bird,” “Black Panther” and “Murder on the Orient Express.” Instead, I stuck to working offline for the brief early-afternoon flight. For travelers who preferred television shows, there was a lot of variety, everything from crowd-pleasing episodes of “Friends” to a number of series I’ve never even heard of, among them “Pickle and Peanut” and “Feud: Bette and Joan.”

This flight was about as basic as it gets. But that’s not a bad thing. The trip from the New York City area to Nassau is so quick and painless that none of the inconveniences (namely the lack of seatback IFE and charging ports) were really a major problem.

But in terms of getting where you want to go — in this case, a 2.5-mile-long stretch of beach in the Caribbean — United’s daily nonstop service is incredibly convenient. And the times (a 10:10am flight there and a 2:10pm flight on the return trip home) are perfect. No waking at the crack of dawn to catch your flight, or losing out on an entire day of beachfront bliss — I wouldn't hesitate to fly this again, though next time I'll be sure to plan in advance with the hopes of scoring an award ticket.

The Points Guy has comprehensive coverage of Baha Mar and the Bahamas — read all our stories here.