Articles
Andrew Kunesh is a senior editor at The Points Guy covering loyalty programs. He's been a miles and points fanatic since 2014 and previously wrote for Upgraded Points and Credit Karma. Outside of the travel world, Andrew is a cyclist, craft coffee aficionado and — despite now living in NYC — a Chicagoan at heart.
Follow
June 09, 2020
•
12 min read 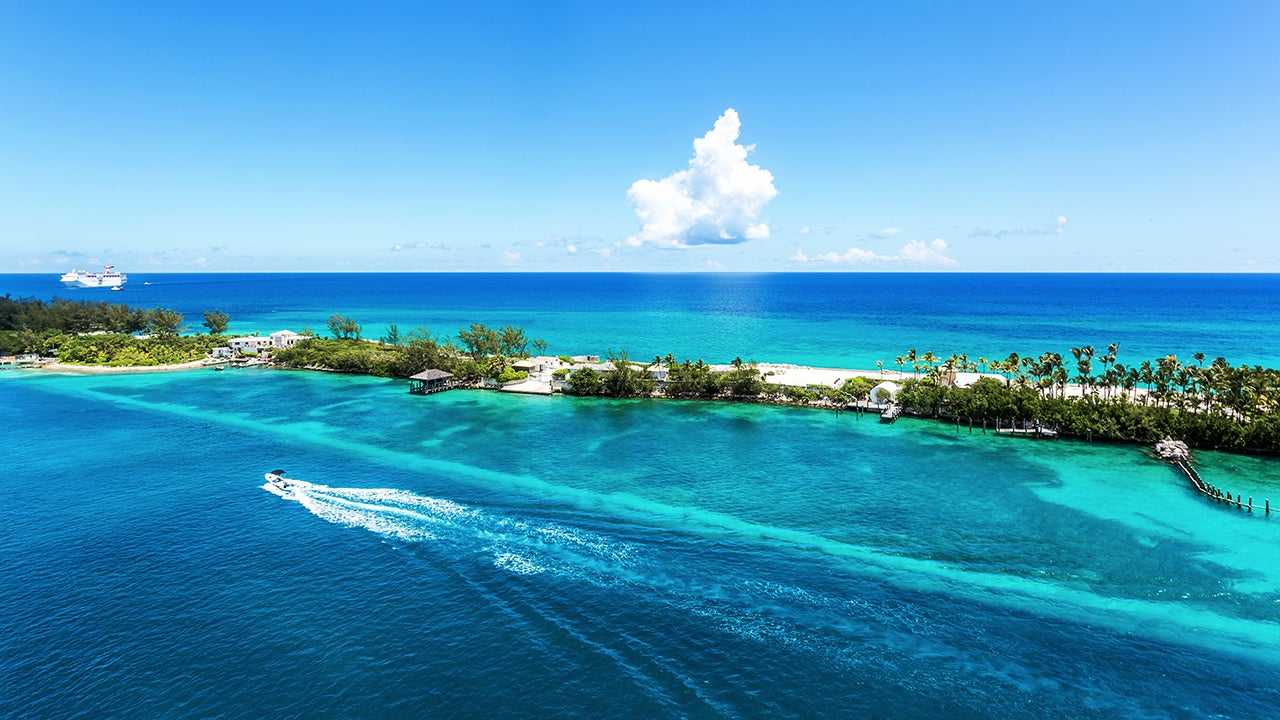 The Bahamas is a well-known tourist destination for Americans. It’s close to home and has pristine beaches and a plethora of resorts that make traveling there easy and fun for couples and families alike. Plus, the country is one of the first to open its borders to Americans after the coronavirus outbreak, making it a good place for a post-pandemic vacation, if you're comfortable with the risks of booking travel now.

If you're thinking of planning a trip to the Bahamas with points and miles, you're in luck. All of the major U.S. airlines fly to the capital city of Nassau, and it's relatively cheap and easy to book. That said, you need to know where to look to find the best deal.

In this article, we’ll show the best ways to fly to the Bahamas with miles and points. But first, let's discuss some of the risks of booking travel during the coronavirus outbreak.

The risks of booking travel now

There are a couple of things to keep in mind when booking travel during the coronavirus outbreak. The first is that — despite the coronavirus outbreak showing signs of slowing in some parts of the world — there is no way to guarantee that the virus will be contained by the time you're set to travel. If the virus isn't contained, you may be forced to cancel your ticket, so keep your airline's change and cancellation policies in mind before you book.

In addition, airlines around the world are on rocky financial ground — when demand for air travel hit historic lows in March, airlines in the U.S. and abroad asked for government bailouts to stay afloat. While passenger counts have started to recover, airlines will likely be hurting financially through 2020 and beyond. Some have already for bankruptcy.

If the airline you book with goes bankrupt, your award tickets and miles could be rendered worthless. With that in mind, you should only book award travel with airlines that you're confident will make it through the downturn without going out of business. So if you plan on booking an American ticket with British Airways Avios, you should be confident that British Airways will survive before you transfer miles and book.

With that out of the way, let's look at the best ways to book tickets to the Bahamas.

The best way to get to Nassau nonstop on miles and points is by redeeming British Airways Avios for tickets on American Airlines. American offers plenty of routings from the East Coast, including year-round nonstop flights to Nassau from Philadelphia (PHL), Miami (MIA) and Charlotte (CLT). The airline also offers seasonal service from Chicago-O'Hare (ORD), Dallas-Fort Worth (DFW) and Washington-Reagan (DCA).

Due to the coronavirus outbreak, not all of these routes will operate right away. At the time of writing this article, American is showing flights departing from Charlotte (CLT) and Miami (MIA) through the summer.

Note that British Airways has a distance-based award chart and determines redemption rates per segment. Ideally, you'll want to book a nonstop flight to avoid redeeming additional miles for each segment. Avios award tickets to the Bahamas are subject to $115 in taxes on a round-trip itinerary.

Below is how many Avios you’ll need to fly from the United States to Nassau on nonstop itineraries from American hubs. One-way awards are available at half the price.

Dallas-Fort Worth or Chicago to Nassau

Unfortunately, British Airways' award search engine has had issues displaying American-operated flights in the past, but thankfully that seems to have been resolved. Note that British Airways operates a fifth-freedom flight between Nassau and Grand Cayman on its Boeing 777 aircraft. If you’re doing a tour of the Caribbean, this is by far the most stylish way to fly between the islands — especially in a premium cabin.

You can book these Delta flights through Air France and KLM's joint Flying Blue rewards program. It's difficult to know exactly how many miles an award flight will cost, but this is what we found during our searches for round-trip flights from the continental U.S. to Nassau:

Like the flights above, expect taxes and fees to run around $115 for a round-trip award ticket.

There are a number of ways to earn Flying Blue miles, but your best bet is to transfer points from a credit card. It's one of the only programs to partner with every major transferable rewards program, so you can transfer points directly from Chase Ultimate Rewards, American Express Membership Rewards, Citi ThankYou Rewards, Capital One and Marriott Bonvoy.

Other ways to redeem points and miles for Delta flights

If you're looking to redeem miles for a trip on Delta, you have more options than just Flying Blue — here's a look.

Even though the program has largely led the devaluation wave (e.g. by removing its award charts back in 2015), there is still value to be found. For example, we're seeing round-trip award rates as low as 20,000 miles in basic economy, though the rates vary by date.

Delta is a partner of American Express, so you can transfer Membership Rewards directly to the SkyMiles program to book these flights. Likewise, you can use cobranded credit cards, the airline's shopping portal and other methods to rack up Delta SkyMiles.

Long story short: Be sure to compare award rates for Delta-operated flights across these three programs before deciding which one makes the most sense to you.

Another option for getting to the Bahamas on points is Virgin Atlantic Flying Club. Round-trip award rates are a bit higher than Air France (35,000 miles for economy and 60,000 miles for business class). However, we've seen transfer bonuses to Virgin Atlantic from both American Express and Citi in the past, so you may wind up with a better deal under these circumstances.

Like Flying Blue, Virgin Atlantic partners with all of the major transferrable points programs, but you may want to steer clear of transferring to the airline now. Virgin Atlantic is on rocky financial ground and there's a chance they may file for bankruptcy this year. If this happens, your miles could be rendered worthless.

JetBlue offers nonstop connections to Nassau from the East Coast, including Boston (BOS), Fort Lauderdale (FLL), New York-JFK, and Orlando (MCO). Nonstop service from Fort Lauderdale and New York is bookable in July, while flights from Boston and Orlando are bookable starting in September and August, respectively.

The carrier prices awards based on revenue fares, with each point worth roughly 1.2 cents per mile according to TPG's latest valuations. While it used to be easy to get a higher valuation than this, it's become less common over the past few months. For example, JetBlue charges $409.75 for a round-trip flight in the Blue booking class from New York to Nassau in September 2020.

Alternatively, you can use 22,000 JetBlue points and $115.25 for the same round-trip ticket. Once you remove the taxes and fees, this award would get you 1.33 cents per point in value. This is higher than TPG's valuation, so it's a solid redemption.

That said, we don't usually recommend transferring points to the airline. Most transferrable points currencies are worth over 1.5 cents per point, so you'll lose value when you make this transfer. Further, Chase Sapphire Reserve cardholders can use their points toward paid travel at 1.5 cents per point through the Ultimate Rewards Travel Portal. This is a better redemption and you'll earn TrueBlue miles on your flights.

You can also apply for a JetBlue Plus Card (a favorite of TPG Editor Nick Ewen), which awards 40,000 bonus points after spending $1,000 in the first 90 days of account opening. The card also offers 10% of your redeemed points back, extending the value of your awards to the Bahamas even further.

The information for the JetBlue Plus Card has been collected independently by The Points Guy. The card details on this page have not been reviewed or provided by the card issuer.

Live in a Star Alliance hub? United Airlines MileagePlus miles may be your best strategy for getting to the Bahamas.

We’ve found that United has decent award space to Nassau, even during peak seasons. The airline operated year-round flights from its Houston and Newark hubs and seasonal nonstop service from Chicago and Washington-Dulles (IAD). There's no word on whether the Chicago and Washington D.C. service will resume this year, but United recently confirmed that Houston and Newark service will resume in July.

Like Delta, United recently removed its award charts, so there's no way to say exactly how many points a flight to Nassau on United will cost. That said, we've found United's pricing to be much less variable than Delta and Flying Blue, with most awards in 2020 being at or close to these price-points:

Like the above suggestion for Delta-operated flights, be sure to compare the award rates United charges with partner programs like Air Canada Aeroplan before redeeming your MileagePlus miles.

The MileagePlus program partners with Chase Ultimate Rewards and Marriott Bonvoy, so you can transfer points in from those programs to top off your MileagePlus balance. Marriott Bonvoy offers a preferential 3:1.1 transfer ratio to United through its RewardsPlus partnership, and you'll earn a 5,000-mile bonus when you transfer 60,000 Marriott Bonvoy points.

You can also open a cobranded card like the United Explorer Card. Cards like these can also give you enhanced economy award availability on United-operated flights, further expanding your options for getting to the Bahamas. Make sure to check out our complete guide to earning United MileagePlus miles too — here, we show you other earning methods like earning with the United shopping portal and earning miles on partner flights.

There are plenty of ways to get to the Bahamas from the United States for relatively few points. We believe that the best option is using British Airways Avios to fly nonstop from an American hub, but with limited availability, assess all options so you can fly on your preferred dates.