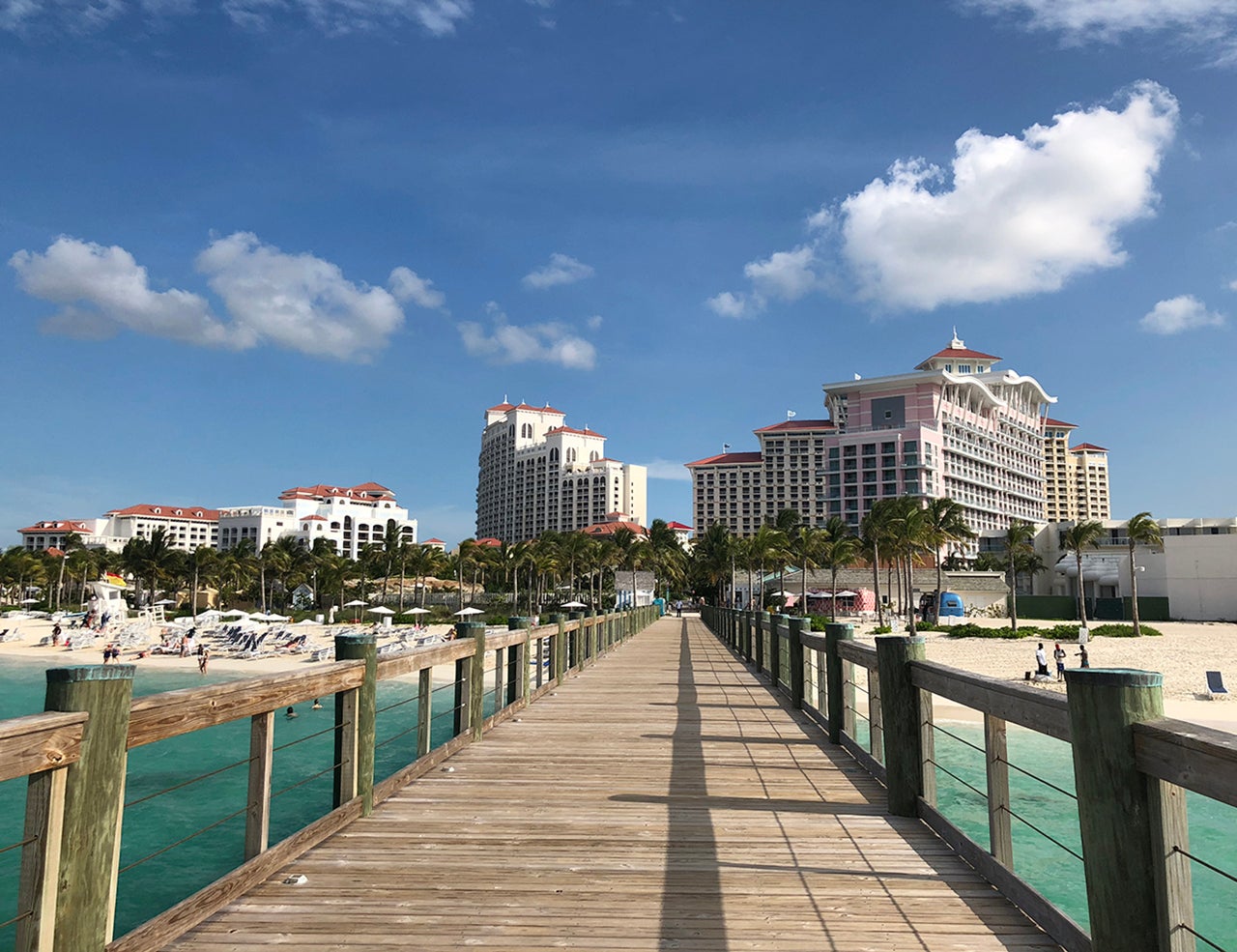 Ask anyone familiar with the Bahamas, a 700-island archipelago that begins just 57 nautical miles from Miami, and chances are they’ll wax poetic about the breathtaking color of the water here. It’s a vibrant turquoise ombré that draws your cheek to the airplane window (and will seriously make you regret booking anything but the window seat).

The first time I laid eyes on these famous Bahamian waters was as my flight began its approach into Nassau’s Lynden Pindling International Airport (NAS) in June. Considered the gateway to most of the other islands in this tropical playground, Nassau is where the Bahamas debuted its first megaresort, Atlantis on Paradise Island, in 1998, paving the way for a string of all-encompassing experiences — water sports, nightlife, dining and shopping — designed to keep you on the same property for the majority of your stay.

The latest to join the fray is Baha Mar, a 1,000-acre property where the "cha-ching" of the slot machines, the flicker of cards at the blackjack table and the smoky stench of cigarettes might make you think you’ve accidentally landed in Las Vegas.

But if you wanted to find the Bahamas in Baha Mar, hope is not lost: The islands' local color can be found — if you know where to look — in this latest megaresort. And if you're willing to venture beyond the property, you'll be rewarded even more.

There are certainly consequences to being so large in scale, and the Baha Mar’s mere presence has changed the travel game in the Bahamas.

“A lot of people don’t know that this resort complex was 10 years in the making,” Fred Lounsberry of the Nassau Paradise Island Promotion Board told TPG. “It represents a 25% increase in hotel room inventory — that’s huge.”

As a result, the Baha Mar project became a driver for more airlift, a complete remodel of the airport and even better infrastructure, including the repaving of roads. Arrivals to Nassau have hit record-breaking numbers this year, with some months showing an increase of as much as 25% year over year.

Whispering Baha Mar employees and local cab drivers tease of a prophesied water park that will take over the site of the shuttered Wyndham Nassau Resort & Crystal Palace Casino next door. If ever this prediction comes true, Baha Mar will become even more closely aligned with the nearby Atlantis.

But does that mean you're doomed never to have a true Bahamian experience as a Baha Mar guest? Not necessarily.

If you're looking in the right spots, the local color shines through even among the manicured lawns and white and gold lion statues of Baha Mar.

Each hotel has a distinct energy. The most affordable and kid-friendly of the three on-site hotels, the Grand Hyatt has two towers: the classy East Tower, with its navy-and-white geometric prints, and the beachy, bright West Tower. The SLS is sexy, cosmopolitan and almost unmistakably "Miami" in design. (Even one of its restaurants, Fi’lia, is helmed by Miami-based chef Michael Schwartz.)

But it's the Rosewood Baha Mar that feels most Bahamian. Here, guests enjoy local teas on furniture that you could imagine Ernest Hemingway lounging in after a day fishing for marlin. The rooms and suites feature colonial furnishings, including four-poster beds, leather furniture and furnished balconies.

But no one comes to the Bahamas to stay inside all day. And Baha Mar goes to considerable lengths to incorporate Bahamian culture, cuisine and attractions all over the grounds — whether that's to give travelers a sense of place or to keep them from straying too far from the grounds.

There's the Dean’s Blue Hole pool, for example, named for the world’s second-deepest natural blue hole, in Long Island, Bahamas. Rather than rush out of the hotel to catch a 45-minute flight to a distant island, guests at Baha Mar can congregate around this, one of the property's busiest communal pools, which features a trio of waterfalls that rush over a 15-foot manmade cliff. Perform your best cannonball into the pool, then swim into the grotto for an up-close look at the sea turtles, sharks, reef fish and stingrays in the adjacent marine sanctuary. Here, at the ecological aquatic conservation habitat, guests can drop by during feeding times for an up-close look at the aquatic creatures ($65 per person, and visitors must be at least 8 years old).

The curves and bends of the meandering walkways along Cable Beach reveal plenty of surprises and lush, tropical gardens. See a group of Caribbean flamingos sunning themselves in a habitat where the Hyatt and Rosewood converge near the beach, or step into the aviary, where 33 colorful native birds flit around. Some will even land on your outstretched fingers.

When you need to get out of the sun, the water or both, travelers will find that Baha Mar is also home to an art gallery known as the Current, where guests can meet local artists. There are more than 2,500 paintings and sculptures by the artists in residence, many on display in the hotels' public spaces and guest rooms, but the Current was one of the few opportunities I had to really surround myself with Bahamian culture without stepping off the property.

In terms of Baha Mar's culinary options, there are several food trucks parked near the beach, providing the illusion that you’ve stopped on the side of a Bahamian road for a quick taco, hot dog or pulled-pork sandwich. But while there are around 30 restaurants and bars at Baha Mar (and more on the way), few offer much in the way of traditional Bahamian cuisine — something of a tragedy for traveling epicureans, because the area boasts pretty tasty cuisine.

Sure, there are dishes featuring conch, snapper and local grouper, but one of the only authentic dining experiences on the resort’s grounds is the Conch Shack, where hotel guests can sidle onto a barstool and watch as fresh conch is wrested from its shell, chopped and tossed into a fresh conch salad. And it’s only open during the day.

Getting off the grounds

Thanks to the enormous property’s seemingly endless diversions, Baha Mar does a good job of introducing travelers to the Bahamas, but it doesn’t exactly immerse you in the island culture.

For that, you’ll have to leave the hotel. The cheapest option by far is hopping on the local bus, which runs right in front Baha Mar's main entrance and loops around the island. (It costs $1.25.) Several locals suggested this as a great way to see the island and engage with Bahamians riding to and from work or running errands.

Taxis into town are plentiful, but be sure to ask in advance about the price, which can vary by up to $10. Ask your concierge how much it should cost to get to your destination before you hail a cab.

For truly Bahamian flavor, head out to the local fish fry. It’s a nightly event held in a collection of weathered, colorful cottages (take your pick) set up beachside near downtown Nassau. Each of them offers a nearly identical menu of fresh fish, plantains and pigeon peas with rice.

And to connect with locals while getting your fill of fare, the four-hour Bites of Nassau Food and Cultural Tour covers several cultural and culinary sites in downtown Nassau. Highlights include the conch fritters, fried grouper and stewed chicken at Bahamian Cookin’, which is owned and operated by three generations of women who cook each plate to order in a charming tin-ceiling restaurant.

The tour continues at Balcony House (the oldest standing wooden residence in Nassau) and pauses for a planter’s punch at the Talking Stick restaurant, tucked inside the quaint Town Hotel. Travelers then visit the Graycliff, a historic bed and breakfast with the restaurant where Jay-Z proposed to Beyoncé. The latter is now a growing complex that includes a cigar lounge and a chocolatier, both stops on the walking tour.

For something more intimate, the Bahamas Ministry of Tourism can arrange dinner at a local residence or a coffee date with a Nassau native. It's a complimentary offering available through the ministry's People-to-People program.

And if the marine sanctuary's sharks and stringrays are more your thing, travelers can take day trips (either by flying or catching a boat) to the Exumas — a region of the Bahamas known for its rock iguanas, nurse sharks and swimming swine.

After traversing Nassau’s hilly downtown streets, and spending a day exploring the islands and cays scattered across the nation's azure turquoise waters, I certainly felt an appreciation for Baha Mar’s luxuries. With so much to see, do and taste under one roof, the resort's a great home base. Just don’t let its comforts stop you from exploring the rest of the Bahamas.

The Points Guy has comprehensive coverage of Baha Mar and the Bahamas — read all our stories here.