Maximizing Points and Miles on a Trip to Savannah, Georgia 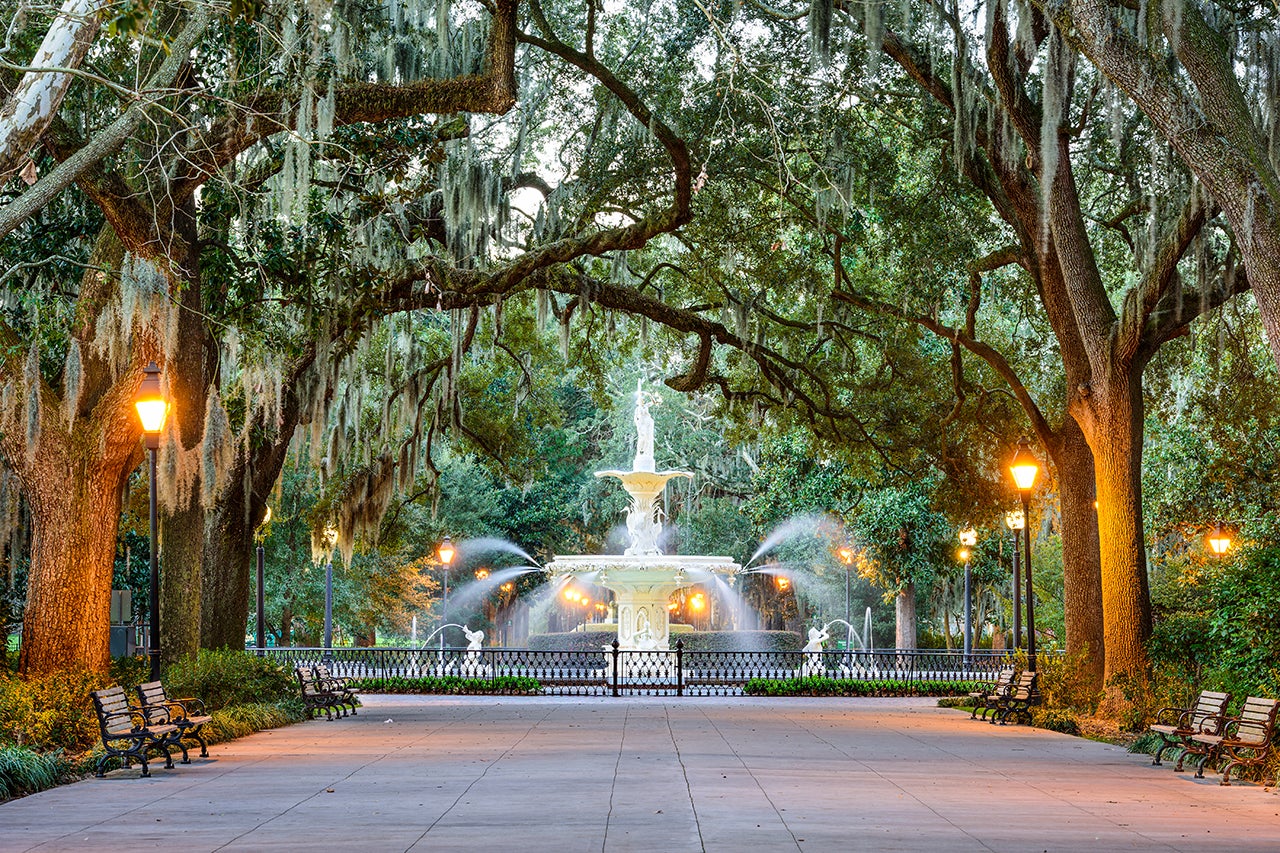 Savannah, Georgia is nicknamed “The Hostess City” and upon arriving, you’ll find out why. The people are friendly, the streets are tree-lined and charming, and the food is unbelievable. It’s been featured in Forrest Gump and Midnight in the Garden of Good and Evil, but you have to see the place for yourself for its many National Register of Historic Places-listed buildings and award-winning restaurants.

Even more important to points and miles enthusiasts, the city is a great value destination, so whether you're wanting to add it to your Southern road trip or visit from afar, here's a complete guide to help you maximize your rewards.

The closest airport to downtown Savannah is Savannah Hilton Head International Airport (SAV), which serves the coastal communities between Georgia and South Carolina. It is served by major airlines like United, Delta, and American, and if you’re coming from within North America, this can be a good destination to use points, as tickets tend to be pricey — anywhere between $200 from the East Coast to $500 from the West Coast.

United offers daily, nonstop flights from most of its major hubs, including Newark (EWR), Chicago-O'Hare (ORD), Denver (DEN), Houston (IAH) and Washington-Dulles (IAD). Even though the carrier is set to remove award charts in November in a full-on switch to dynamic award pricing, flights are still pricing at the saver-level rate of 12,500 miles each way in economy — though if you have a card like the United Explorer Card, you may have access to better economy award availability. Saver awards in first class are much harder to come — expect to fork over at least 35,000 miles for a one-way flight up front.

American is another carrier with numerous flights into Savannah, including nine flights daily from its hub in Charlotte (CLT), two to three from Dallas/Fort Worth (DFW), two daily from both Miami (MIA) and Washington-Reagan (DCA), and one daily from Chicago-O'Hare (ORD). It also offers two on weekends from New York-LaGuardia (LGA) and three on weekdays from its Philadelphia (PHL) hub. American is also implementing more dynamic award pricing, so expect to pay anywhere from 12,000 to 20,000 miles for one-way economy flights and 25,000 to 55,000 for business/first.

Delta is king in this region with 11 daily nonstop flights from Atlanta (ATL), 2-3 daily nonstops from both LaGuardia and New York-JFK, and one from Detroit (DTW). It offers one Saturday nonstop from Boston (BOS) and a weekly nonstop to Minneapolis/St. Paul (MSP). Delta too offers dynamic award pricing — ever since it removed award charts back ion 2015 — but you can expect to redeem roughly 12,000 miles for a one-way economy award, 17,000 miles for Comfort+ or 34,000 miles for first class.

For a more leisurely journey, visitors can also reach Savannah by Amtrak on the Silver Service/Palmetto line that connects New York City to Miami. From New York, it’s about 5,000 points for a standard seat, 7,000 points for a business class seat, and 11,000 points for a viewliner roomette.

Savannah’s airport is around 30 minutes from the historic district. Taxis are easily accessible, as are rideshare apps. Chatham Area Transit, or CAT, has express buses between the airport and the historic district for only $1.50 on route 100x. You can get off in the center of town at Reynolds Square, and service runs every hour and 25 minutes every day, but note that the last bus departs SAV at 5pm, which isn’t ideal for late arrivals.

Once you’re in Savannah, the best way to see the city is by foot. It’s set up on a grid system with squares in the middle that are the perfect place to get your bearings. If you get outside of the historic district, the bus and rideshare apps are the best way to go. Parking can get expensive and is unnecessary unless you’re exploring surrounding areas like Tybee Island or Hilton Head Island.

Savannah has always been a great place to find cozy bed and breakfasts and big-name chain hotels, but in recent years it’s seen a boom in boutique hotels, especially those connected to loyalty programs. All of these properties are within walking distance of the city’s major landmarks.

The Andaz Savannah on Ellis Square is steps away from the City Market and its surrounding shops and restaurants. Guests enjoy complimentary WiFi and minibar snacks. As a Category 4 property in the World of Hyatt program, you can snag one of these rooms for only 15,000 points per night — or consider using a free night certificate or two from the World of Hyatt Credit Card. Room rates here start at over $200 per night but can easily be double that amount, getting you great value from your points (or certificates).

Some of the city’s best hotels are a part of the Marriott Bonvoy family. And all of the following properties fall into Marriott's Category 6, requiring just 50,000 points per night but also eligible for the annual free night certificate offered to holders of the Marriott Bonvoy Brilliant® American Express® Card. With room rates that can easily climb to $400 per night, any of these would be a great award redemption.

The Mansion on Forsyth Park is in both Marriott’s Autograph Collection and the Kessler Collection of hotels, meaning it has incredibly-designed rooms, artwork throughout the property, a spa, and an in-house cooking school.

Another Kessler and Autograph property is The Bohemian Hotel Savannah Riverfront, which has rooms decked out in leather and wood inspired by colonial Georgia. The brick building has views of the river and the historic district as well as a rooftop bar and restaurant.

Named one of the best new hotels in the nation, the Perry Lane Hotel is a Luxury Collection property with multiple dining options including Peregrin, its rooftop bar (pictured above). Rooms are accented with unique artwork and stocked with a private bar.

The Alida Hotel is named for one of the women who spearheaded the historic preservation in the city, thus saving the charming buildings it’s known for today. The Riverfront hotel is in the Tribute Portfolio and features design elements from the nearby Savannah College of Art and Design. It also boasts a pool, restaurant, and rooftop bar.

Of course, once you've decided where to stay, you'll then need to figure out how to fill your time in town. Fortunately, there are plenty of things to stay busy, whether it's a short weekend trip or a longer visit.

Savannah is Georgia’s oldest city — founded in 1733 — and many of the buildings have been preserved through the hard work of the historical society. A number of historic homes are open for tours, including the Flannery O’Connor Childhood Home, the home of Girl Scouts founder Juliette Gordon Lowe and the Mercer Williams House, which was the scene of the crime in Midnight in the Garden of Good and Evil. The American Prohibition Museum covers that period in history as it relates to the city and even has its own speakeasy. See priceless works like the “Bird Girl” from Midnight in the Garden of Good and Evil at the Telfair Museums or admire the next generation of artists at the SCAD Museum of Art.

Savannah is conveniently located on the coast and has easy access to nearby beaches and barrier islands. The closest is Tybee Island, which has a historic lighthouse and museum as well as laid-back seafood restaurants. To the north is Hilton Head Island, a popular area for golf and family resorts, and a few hours further is Charleston. To the south are the Golden Isles, including Jekyll Island and St. Simon’s Island.

The most popular activity in Savannah is eating and drinking. In fact, it’s legal to carry an open container of alcohol in the historic district — as long as it’s in a plastic cup. Enjoy a locally-made craft beer at Service Brewing or a funky martini at Jen’s and Friends. There are plenty of places to have a drink with a view like Perch, Top Deck Bar and Rocks on the Roof.

Dine out at one of the city’s incredible restaurants like The Grey, Mrs. Wilkes Dining Room and The Collins Quarter. The food tours from Savannah Taste Experience are a good way to try multiple dishes in a day, while cooking classes at Mansion on Forsyth allow visitors to bring home their favorite Southern recipes. Even kids can get in on the action, with several child-friendly restaurants in town.

Savannah may not be a bustling metropolis like New York City, but it's still a fantastic destination for a weekend or even a week-long trip. With service from all major US airlines and an abundance of points hotels, your travel rewards can get you far in town. Just be ready to plan a return trip before your first one wraps up.