Delta's Regional Jets Are About to Get a Huge Upgrade 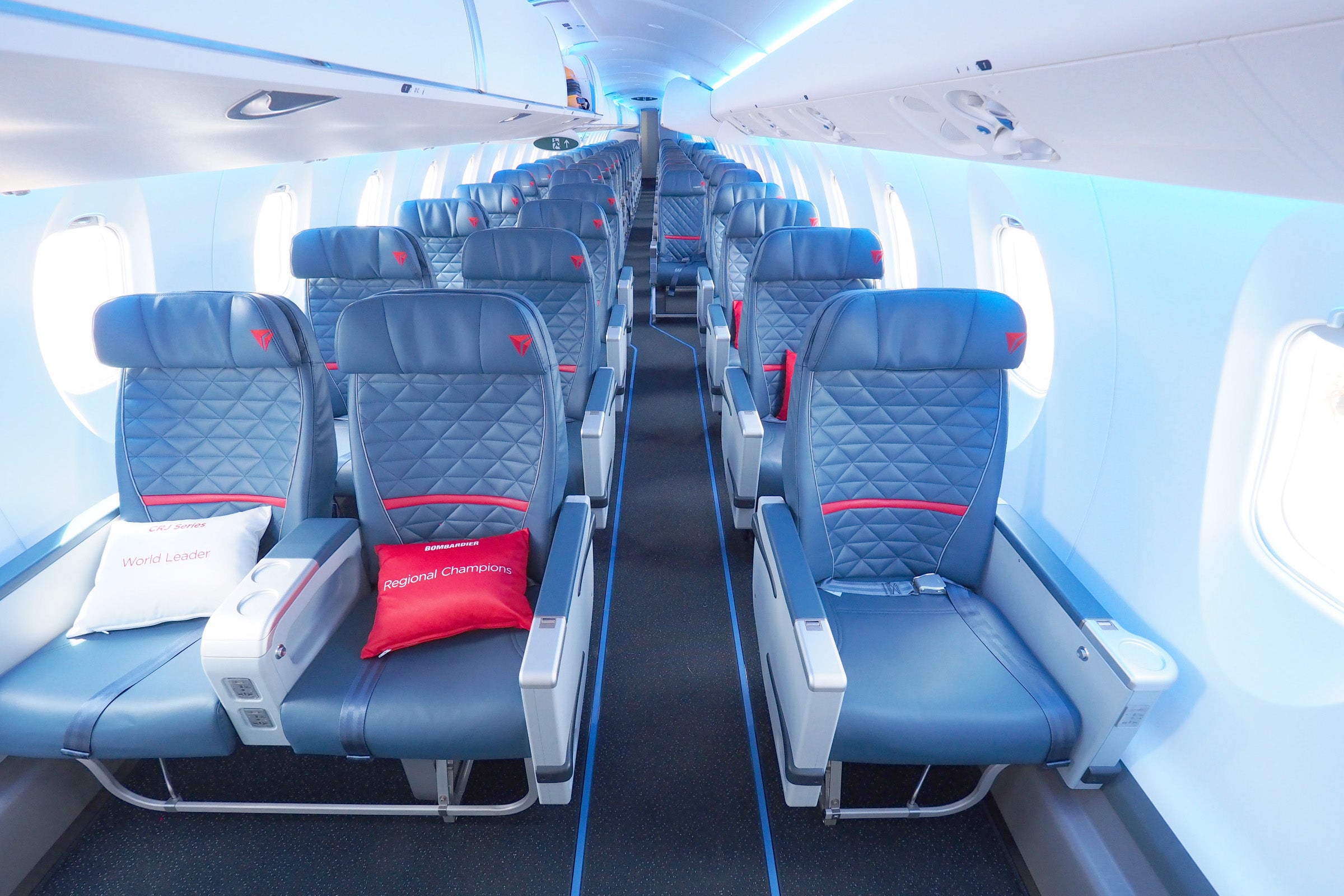 Just as they're doing with mainline aircraft, including narrow-bodies and long-haul planes alike, manufacturers and their airline customers are investing significant resources in updating their regional jets, offering more spacious cabins, improved overhead storage space and amenities like power outlets and Wi-Fi.

The latest aircraft to get a major overhaul is Bombardier's workhorse CRJ900, a plane that I've actively avoided flying in the past — primarily because of the limited overhead bin space, and the requisite bag check that follows. But my position will likely change after what I experienced today.

This week, Bombardier's showing off its new Atmosphere cabin at the Farnborough Air Show, and it manages to significantly improve passenger comfort. It'll launch with Delta Connection later this year.

Delta began a massive overhaul of its regional-jet fleet in 2016, so the airline's CRJ900s are already far more attractive than they once were, as you can see in this Delta-provided image below.

While the seats themselves appear to be more or less the same, the cabin feels more modern and spacious, with larger overhead bins, improved lighting and more modern windows.

There's more room for flight attendants too, with a larger entrance and galley area at the front of the plane.

First class maintains the same 1-2 configuration, with a total of 12 seats.

Modern regional jets are especially appealing if you manage to snag a seat in first class, thanks to the single "A" seats by the port-side windows.

I really am a sucker for those single seats — if you're traveling alone, they can't be beat.

While it's fine for a short regional hop, the center console is a bit narrower than what you'll find on mainline jets.

All first-class seats have power outlets and USB ports, though, so you won't have to fight your neighbor for some in-flight laptop fuel.

The first-class overhead bins have gotten a significant upgrade — there's 50% more space, making it possible to store more bags in a wheels-first arrangement. Economy bins have been enlarged by 40% as well, but they aren't quite as big as those up in first.

The forward lavatory has up to 90% more space, with up to three more inches of headroom. It's also large enough to accommodate wheelchair passengers.

Delta offers five rows of Comfort+, for a total of 20 seats, matching the number you'll find on the previous-generation aircraft flying today.

The first-class aisle snakes to the left at the beginning of the Comfort+ section — while the economy aisle is workable, it's noticeably narrower than what you'll find up front.

The windows feel significantly larger than what I remember from my past CRJ flights — the modern frame design certainly doesn't hurt.

In addition to up to three inches of extra legroom, Comfort+ passengers get free cocktails, even on shorter flights.

Every row on the plane offers in-seat power now — even in coach. Economy and Comfort+ passengers need to share their outlets, though, with one universal outlet and one USB port for each pair of seats.

Delta's economy cabin has actually shrunk a bit, dropping from 44 seats to just 38 — you'll not only have a roomier cabin, you'll also be sharing it with fewer passengers.

Exit-row seats aren't branded as Comfort+, but they offer even more legroom than you'll find up front.

A lone pair of seats at the rear of the cabin offer a bit more privacy, but you'll have to be okay with being stuck next to a closet, and the rear lav.

Speaking of the rear economy lavatory, it's surprisingly spacious for a regional jet, even though you'll have more room in the forward lav.

All seats have a pop-out or fold-down tray table that's big enough to support your laptop — or an in-flight drink and meal.

While there are plenty of improvements in the cabin, those seated up in the cockpit won't notice much difference — according to a Bombardier test pilot, there aren't any major tweaks to note, so pilots should be able to operate both versions of the aircraft fairly seamlessly.

Still, like everyone else, crew members will benefit from that additional space in the entrance area, and in the forward lav.

After spending some time on Delta's new Atmosphere-equipped CRJ900, I've definitely changed my tune — while it's not yet clear if the airline will distinguish Atmosphere flights, assuming it'll be possible to see which plane you'll get, I certainly wouldn't avoid booking this.