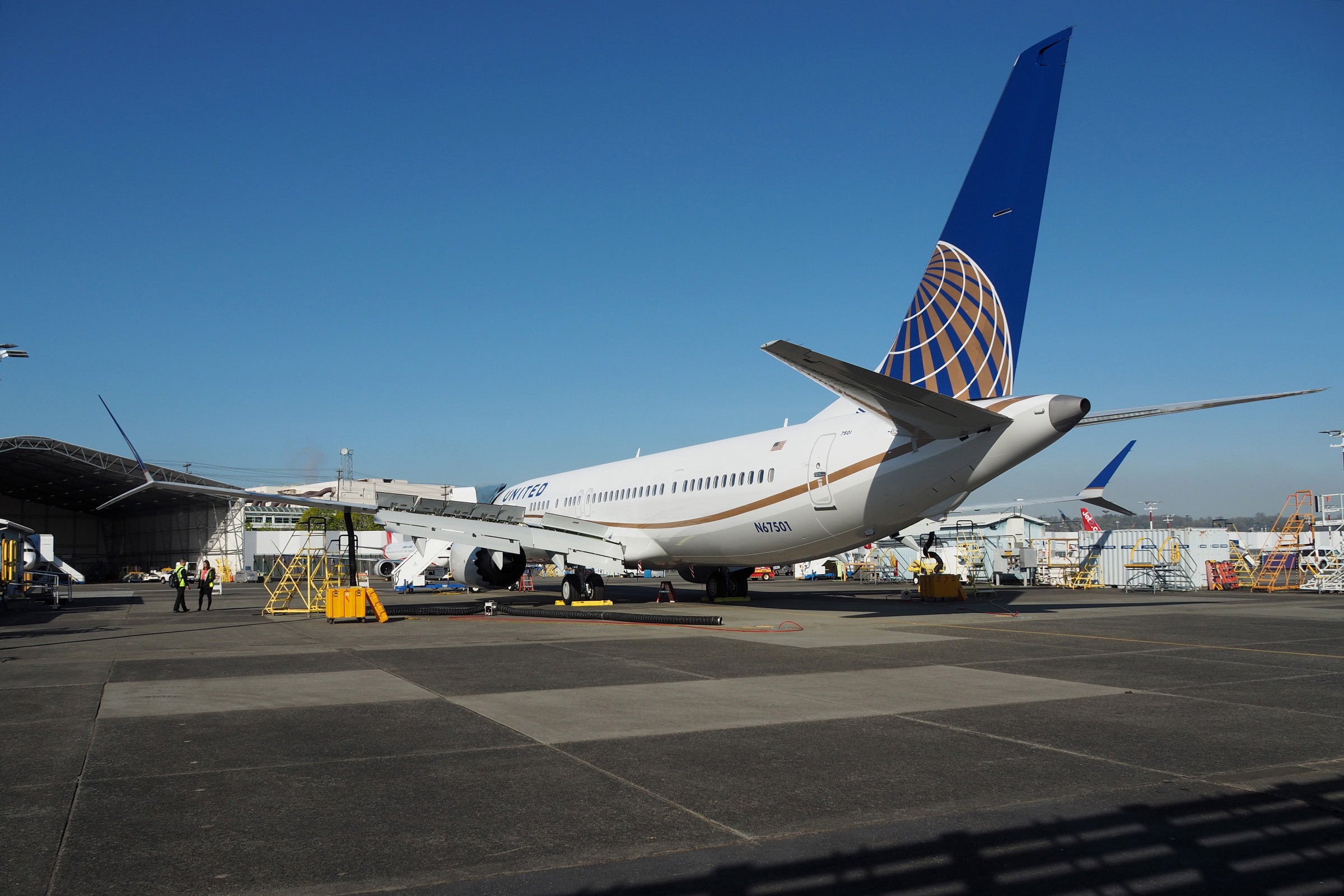 Exclusive Look Inside United's Very First Boeing 737 MAX
This post contains references to products from one or more of our advertisers. We may receive compensation when you click on links to those products. Terms apply to the offers listed on this page. For an explanation of our Advertising Policy, visit this page.

United's gearing up to launch service with Boeing's latest and greatest single-aisle jet, the 737 MAX. UA's variant, the MAX 9, is nearly 9 feet longer than the version flying with a handful of carriers today, including Norwegian and American Airlines. While Indonesian carrier Lion Air beat United to the MAX 9 punch, UA will be the first US-based airline to fly Boeing's new extended-length 737.

I had a very rare opportunity to tour the new plane ahead of delivery, at Boeing Field (BFI) just south of Seattle. The plane was completely powered down, due to some exterior work, but the large windows let in enough light to capture much of the cabin.

The first thing I noticed was United's "swoop" design, which you'll otherwise only find on the 787-8 and 787-9 Dreamliners. The other obvious difference is the chevron-fringed nacelles around the LEAP engines, which help to reduce noise (while also looking pretty awesome).

While the MAX can be flown by current 737 pilots, thanks to its common type rating, the cockpit offers several upgrades, including four new 15-inch displays — similar to those on the 787.

The two galleys may offer some minor upgrades, but components should feel familiar to flight attendants who are used to working the airline's existing 737-700s, -800s and -900s.

The biggest cabin enhancements are in first class, starting with a raised logo panel similar to what you'll find on the 777-300ER.

First class offers a total of 20 seats, in a 2-2 configuration — the same arrangement as on United's 737-900ERs. These are the exact same seats the airline has been installing on its Airbus fleet.

Most of the airline's older 737s currently offer live seat-back TV — the MAX sports streaming entertainment, instead. As a result, the seatbacks definitely look a bit bare.

The new seats also feature an integrated tablet holder — I didn't have one on hand, but it worked to prop up my iPhone just fine.

There is one thing I really don't like about this version of the new seat, though. United opted to add airbags at the bulkhead seats — while you'll have a bit more legroom in Row 1, I'd rather pick a seat farther back to avoid having to deal with a bulky airbag during the entire flight.

Another change is the lack of a bulkhead wall between economy and first class.

As a result, passengers in the first row of economy on this plane actually have under-seat storage, which is a huge plus. It also enables first-class passengers seated in that row to recline a bit more than they otherwise would be able to with a bulkhead just behind.

Unfortunately Economy Plus seats in Row 7 do have airbags, just like those in Row 1, so keep that in mind — they could become especially annoying on longer flights.

I found legroom to be excellent in Row 7, though, so aside from the airbags I think this a great option in the economy cabin — stay tuned for a post examining the best and worst seats in both cabins soon.

The MAX 9 offers six more Economy Plus seats than the 737-900ER — 12DEF and 14DEF have extra legroom on the newer plane, while these are ordinary coach seats on many of United's -900ERs.

Most Economy Plus seats offer 34 inches of pitch, though you'll get a bit more in the front and exit rows.

The last row offers a very different experience, though — you get 30 inches of pitch back there, plus you have to deal with the galley and lavatories just behind, plus limited recline due to the wall (the aisle seat is fully reclined in the picture below).

There's no seat-back entertainment in coach, either.

Instead of a tablet holder in the tray table, economy seats offer a pop-down platform at the back of each seat — the same model installed in AA's new fleet.

There's also a universal power outlet — two for each row in economy, and one at every seat in first class.

They're by no means large, and appear to be the same version selected by AA.

The sinks are bizarrely narrow, too.

While the 737 MAX 9's interior may not look all that different from the Sky Interior version of United's 737-900ERs, the plane's exterior has a very different appearance — the swoop livery and chevron engine design make the MAX look almost like a "baby Dreamliner."

While I have yet to fly on a MAX myself, I'm told that the plane is noticeably quieter than the Next-Generation Boeing 737. I'm also a fan of the drop-down tablet holder in coach, though many travelers will no doubt miss having a seat-back display. The onboard ViaSat Wi-Fi should be especially speedy, though, making it easy to pass the time by browsing the web or streaming free content from United's local server.

Currently, United's latest planes are scheduled to enter service on June 7, 2018, with the first flight departing from Houston (IAH) at 7:35am. They'll operate flights throughout North America — Alaska and Hawaii included.