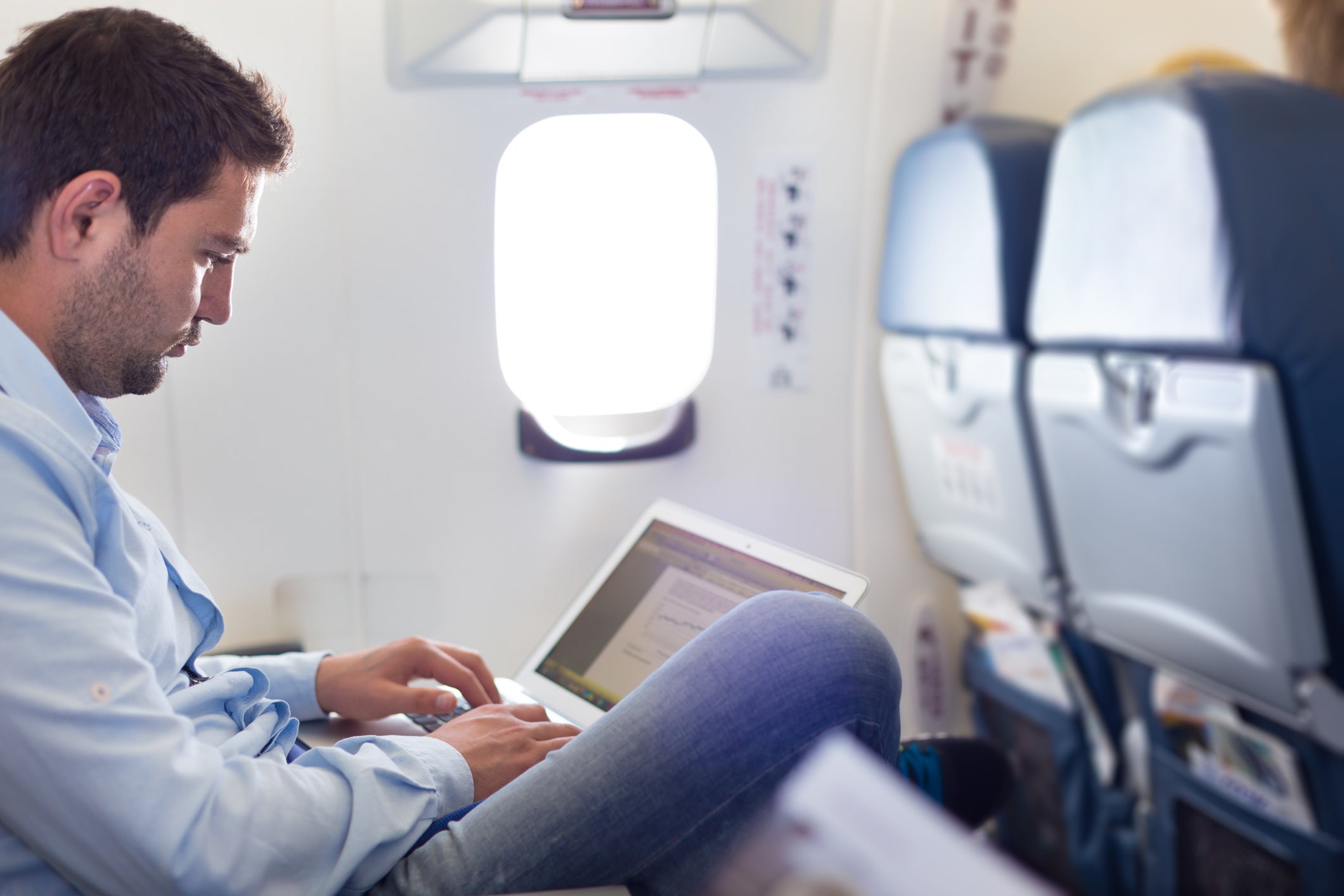 What ViaSat 2 Means for the Future of In-Flight Wi-Fi
This post contains references to products from one or more of our advertisers. We may receive compensation when you click on links to those products. Terms apply to the offers listed on this page. For an explanation of our Advertising Policy, visit this page.

At this year's Aircraft Interiors Expo (AIX) in Hamburg, TPG sat down with ViaSat's VP of Commercial Mobility, Don Buchman, to talk shop about the upcoming ViaSat 2 satellite launch, and what it will mean for airlines and their customers.

First, I asked Buchman for some background on what ViaSat already has in place, along with what's to come.

"Our ViaSat 1 and KA-SAT are now old technology, 6-7 years old," said Buchman. "ViaSat 2, which is launching probably next month, doubles it. ViaSat 3 launching in 2019 will be a terabit per second. That's where our growth is at. If you're going to spend $500-600 million on a satellite, do you wanna get 15 gigabits to resell or a terabit to resell? It's pretty easy economics. ViaSat 2 is our design, built by Boeing, with a payload co-designed by Boeing. ViaSat 3 will have a Boeing bus — [a bus being the infrastructure of the satellite body itself] — but ViaSat is doing the entire payload. We'll be building our own high-bay [assembly building] in Tempe, Arizona. We'll be building the payload and testing it, then delivering it to El Segundo to mate with the bus, do final testing and verification there, then it goes off to the launcher."

How do you decide where to launch?

"It depends on the launcher," said ViaSat spokeswoman Chris Phillips. "For ViaSat 3 we do have contracts with Arianespace, as well as Space X. So if it's Space X, we'll launch out of Cape Canaveral, and if it's Arianespace, it will be French Guiana."

Will ViaSat 1 customers automatically have access to ViaSat 2 bandwidth?

Buchman : "Anyone that's on our current Generation 1 hardware will have to upgrade some pieces of the hardware, mainly the antenna and the modem, to get access to ViaSat 2. We'll work with our partners to make that as painless as possible. If they want to get access to the new expanded coverage area. They're still gonna get the same great performance they're getting today. There's no degradation in what they're getting today. Really what ViaSat 2 is gonna bring to them, it's gonna bring more coverage area. So think of JetBlue, all of their flights in the Caribbean, covering off the eastern shoreline that goes from New York to Puerto Rico. Today they have coverage for about an hour, but it will be full coverage with ViaSat 2."

Will airline customers notice any difference, no matter what satellite they're linked to?

Buchman: "Not today. Today they actually use three satellites, [WildBlue, Anik F2 and ViaSat 1] and no one knows the difference as we fly around the pattern. What we do is have a common experience. We keep trying to upgrade that experience over time, so what happens on ViaSat 1 is when ViaSat 2 launches, we'll probably have a better experience on ViaSat 1 because we'll have less customers on it [who are soaking up that bandwidth]. What a good experience is today doesn't stay static for three years. To have the same experience in three years, you'll probably have to deliver three times the capacity. The expectations will go up just to stay with today's standard. We sell on a SLA [service level agreement] that's per passenger, so it doesn't matter whether it's one passenger on a plane that uses it, or 100 we'll have the same SLA. For us, it's all about devices under the satellite. It doesn't really matter which aircraft they're on."

Have any airlines signed up for transatlantic service?

Buchman: "Not yet. We're close. We have several that we believe will be going forward with the ViaSat 2 launch. We're getting really good prospects for that."

After ViaSat 2 is launched, how long will it take to be online for airline use?

Buchman: "We'll probably have our consumer residential business launch by the end of the year, and then the first quarter after that, we'll launch the airlines. We always have the residential first. We'll get that up and running, and then we'll bring our airline customers in."

What happens after launch?

ViaSat 2 will launch from French Guiana on a rocket built by Arianespace, with an additional payload. That second payload is another communications satellite, the Eutelsat 172B satellite. Eutelsat 172B will provide satellite coverage in the Asia-Pacific region, including live TV streaming to airlines for Panasonic Avionics.

So basically, the two satellites are released and then transferred up to their final orbit. Given the fact that there are two heavy satellites that are going, it's going to take about six months for ViaSat 2 to reach its final orbital slot.

The launch had been scheduled to occur on April 25, but has been postponed by civil unrest in the territory, ViaSat revealed on April 3. The launch is now estimated to occur in May, and Buchman said that ViaSat 2 would reach its orbital slot around the October timeframe.

Boeing will get the satellite up and running, then hand control over to ViaSat from there. ViaSat will next complete all of its testing, communicating between the satellite and ground stations, making sure all beams are up and running and calibrated. That testing process takes an additional month or two before ViaSat can really begin using it with customers, estimated to be this December for residential customers, and Q1 2018 for airlines.

What makes ViaSat better than other Wi-Fi providers out there?

"What our three satellites [even before ViaSat 2] offer in terms of service quality, scale and affordability is an apples-to-oranges comparison to any other in-flight Wi-Fi provider," said Buchman. "The difference comes down to how much capacity we have in our network. This is a really important differentiator, because other in-flight Wi-Fi providers purchase expensive wholesale bandwidth, and many cannot afford to buy enough bandwidth to truly satisfy passenger demand — which results in passengers ‘fighting’ for or ‘sharing’ the amount of purchased bandwidth, or have their own satellites, but are playing catch-up as ViaSat’s technology is orders of magnitude better than any other satellite in terms of capacity, performance and the ability to enable service at scale."

No matter how you look at it, ViaSat seems to be way ahead of the Wi-Fi game, leaving other providers to play catch-up. Here in the US, you'll find ViaSat Wi-Fi exclusively on JetBlue and Virgin America, along with some United planes. American will also be installing it on its forthcoming 737 MAX fleet.