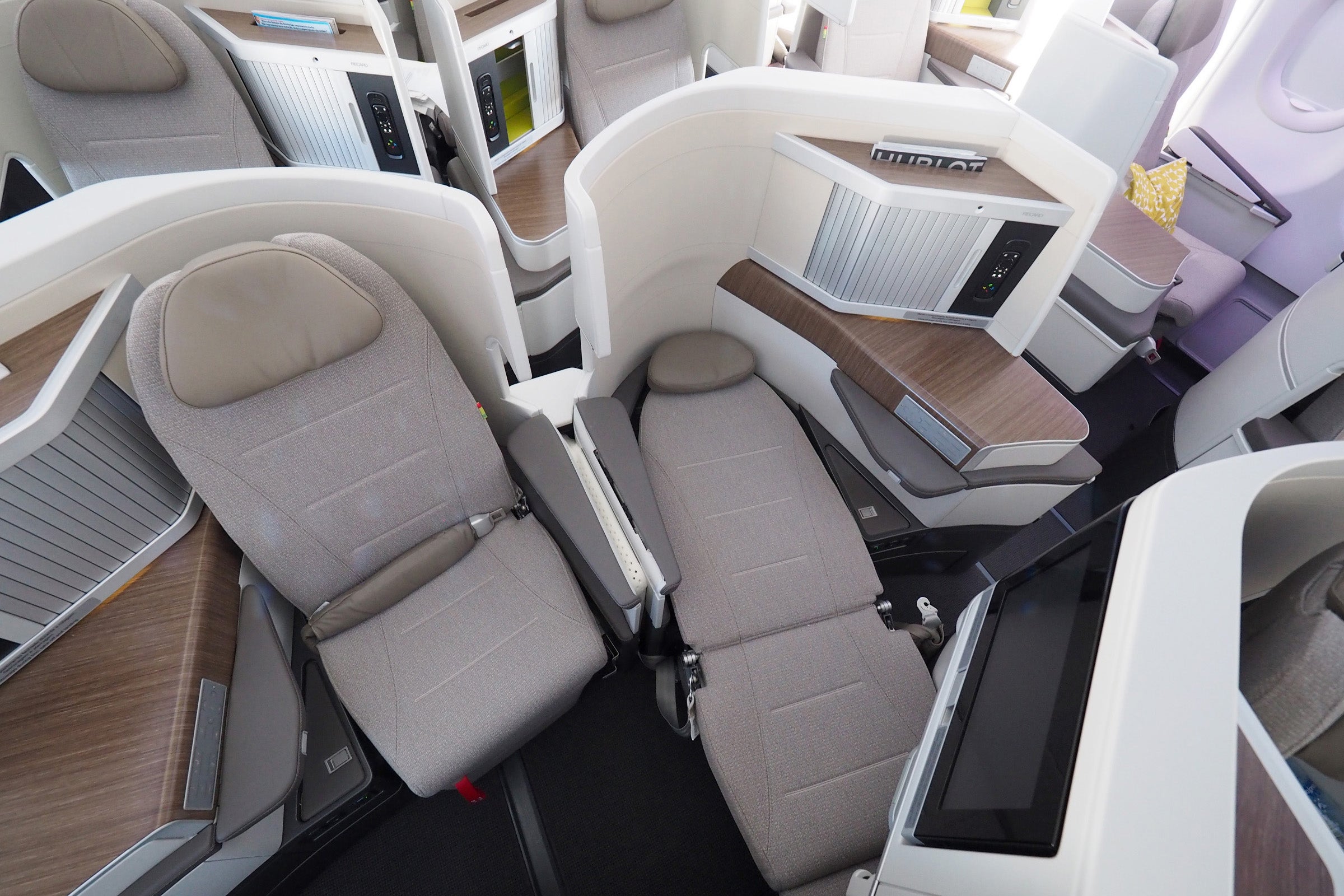 The super-sleek A350 has been getting all the love recently, but there's another new and improved Airbus plane that should be on your AvGeek radar: the A330neo.

I got my first look at the neo's super-slick "Airspace" cabin at 2016's Aircraft Interiors Expo; now the plane is expected to launch with TAP Portugal later this year. TAP will take delivery of seven neos in 2018, with another 14 coming soon. The airline also has 19 A320neos, 17 A321neos and 14 A321LRs on order, which will be used for a mix of regional and longer international flights.

Miquel went into great detail in his post last month, so today I'm going to focus specifically on my experience in TAP's entirely new business-class cabin, which we got to experience for the first time on last week's test flight from Chicago to Atlanta, since it had been reserved for Airbus and TAP executives on last month's flight.

TAP's business-class cabin consists of 34 seats in a 1-2-1 configuration, and sports Recaro's new CL6710 seat — the same model you'll find on El Al's Dreamliners. These seats will eventually be added to all widebody TAP aircraft, with the upcoming retrofit process expected to be completed by the end of 2020. They're a big improvement over TAP's current product, so I'm glad they'll be available fleet-wide soon.

The seats resemble the familiar reverse-herringbone design found on many long-haul carriers, from Cathay Pacific to EVA Air, however the arrangement is significantly different, with the seat position alternating between rows.

Some rows have center seats positioned next to one another, in a "honeymoon" arrangement, while others have seats next to the aisles — while the side-by-side seats are great if you're traveling with a companion, there isn't a center wall available to divide the space, which could make things a bit awkward if you're flying next to a stranger.

For solo travel, I highly recommend the window-facing window seats, since you'll have significantly more privacy there.

The aisle-facing single seats are an acceptable alternative, though they're much more exposed.

There are two lavatories available between business class and coach, plus one more at the front of the biz cabin. They're not especially exciting — I find the lavatories to have a more modern, spacious feel on the A350.

Sadly TAP opted to leave out the overhead air vents, too, so you're at the crew's mercy when it comes to climate control.

Since this wasn't a commercial flight, and the priority was the various testing taking place in the economy cabin, Airbus didn't assign seats — we were just told to grab whichever business-class seat we'd like.

I opted for one of the more exposed aisle seats, so I could see how private it felt compared to the window-facing seats I'm far more familiar with.

I spent much of the flight up and about chatting with Airbus employees and journalists, and exploring the plane, but I did find the seat to be comfortable, and reasonably private. I'd definitely go with a window-facing seat instead, though, if one happens to be available on your flight.

You can also lower the armrest to create a bit more space, if you'd like.

I found the seats to be comfortable in the lie-flat mode, though there wasn't enough time to sleep during our 90-minute hop down to Atlanta.

There's plenty of overhead bin space, though storage is somewhat limited within the seat itself.

I only found two compartments — one barely large enough for a phone and/or small camera underneath the armrest, and another small compartment above the side table.

Each seat has a slide-out tray table, and an adjustable 16-inch screen.

While TAP's interior is more or less completely ready to go at this point, even though the airline has yet to take delivery, the in-flight entertainment system was still a work in progress.

I found the screen to be sharp and fairly responsive, but many of the options wouldn't load.

There were a small number of movies to choose from — presumably to test the system and help entertain off-duty staff during the 150 hours of flight testing — but some of the content clearly had yet to be loaded.

The picture also seemed a bit soft, so it's likely that the movies available during my test flight weren't uploaded at their full resolution.

After a couple minutes of poking around, the video content froze and I wasn't able to pull it up again, so I poked around the map, instead.

I came across a fun kids-friendly map, above, along with the typical high-res adjustable map you'll find installed on most modern long-haul planes. There didn't seem to be any live camera views available as you'll find on the A350, though.

You can control the system using the touchscreen, or via the handheld remote.

The remote had a keyboard on the reverse side — presumably to message other passengers on the flight.

I was surprised to find that the Panasonic Wi-Fi system was actually working after takeoff, but it quickly became unavailable — we were offline before I had a chance to run a speed test, but it didn't seem to be especially fast. TAP selected Ku- band connectivity for its A330neo fleet, which isn't quite as fast as the Ka-band internet you'll find on some aircraft, including JetBlue's A320s and United's new 737 MAX fleet.

I was pleasantly surprised when I walked into Airbus' fancy neo mock-up at the Aircraft Interiors Expo back in 2016 — the A330 has been flying for years, and while it's certainly a popular aircraft, it's not especially exciting from a passenger perspective.

I personally don't care for the windows, though — they're noticeably small on the A320 and A330 families, which is one of the many reasons I prefer the Airbus A350. The A330neo does offer a quieter ride than the original model, plus it offers a refreshed cabin design, but those small windows still stand out compared to the more advanced A350.

Speaking of the design, while TAP's neo does employ some "Airspace" elements, I thought it felt a bit toned down compared to the mock-up I had seen in 2016. For example, here's the laser-cut ceiling design from the mock-up:

And here's a similar (painted on) element on TAP's plane:

Overall, I found TAP's A330neo to be a huge upgrade from the carrier's existing A330 fleet, especially in business class. Although several rows were dedicated exclusively to flight testing, economy looked quite nice as well — be sure to check out Miquel's post for a closer look there.

It's not clear which routes will get TAP's new plane first, though the A330neo is expected to replace the airline's existing long-haul fleet, so TAP's US destinations of Boston (BOS), Miami (MIA), New York (JFK) and Newark (EWR) could end up with neo service before 2018 is through. While award availability can be a bit hit and miss, when space does pop up you can book TAP flights for 30,000 United miles in economy or 70,000 miles each way in business class. You can also use miles from another Star Alliance program, if you prefer.

Awards could become more plentiful as the airline adds routes in the future, too — with a range of over 7,500 miles, the A330-900neo could easily reach many long-haul destinations from TAP's hub in Lisbon (LIS), so it wouldn't be unreasonable to expect flights to new markets in the US and beyond to be announced soon.