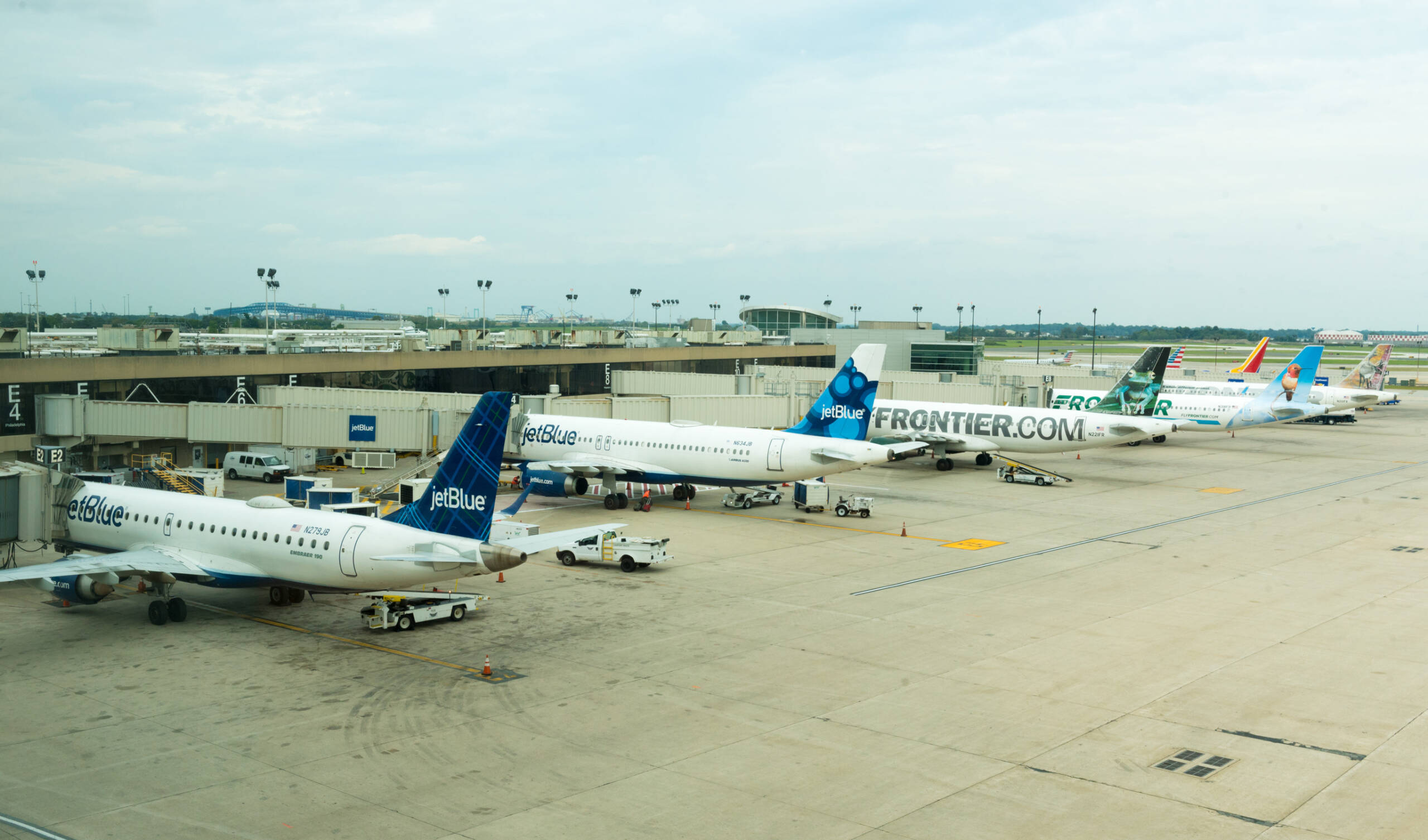 Budget airlines muscle into big airports as coronavirus creates new opportunities
This post contains references to products from one or more of our advertisers. We may receive compensation when you click on links to those products. Terms apply to the offers listed on this page. For an explanation of our Advertising Policy, visit this page.

These are all opportunistic moves airlines have made since the coronavirus pandemic hit, possibly helping to reshape U.S. airline maps for years to come.

“We have historically been boxed out of places where we want to be bigger or we want to fly," Spirit CEO Ted Christie told TPG on pandemic growth opportunities during the Boyd International Aviation Forecast Summit on Oct. 12. "We’re always trying to look up and look out.”

In total, JetBlue, Southwest, Spirit and Sun Country Airlines have added or plan to add flights at seven restricted airports in the U.S. that are either slot controlled or have limited gate availability. And, had the U.S. Federal Aviation Administration (FAA) not extended slot waivers at New York John F. Kennedy (JFK) and LaGuardia (LGA), and Washington Reagan National (DCA), travelers could see even more of this opportunistic expansion.

The benefits to travelers are direct. Competition, particularly from discounters, lowers fares thus enabling more people to fly. The Department of Transportation (DOT) itself gave the phenomenon a name in the 1990s, dubbing it the "Southwest effect" for the drop in fares and jump in flyers when Southwest Airlines added a new city. The contemporary caveat, however, is that air travel remains at historic lows amid continuing concerns over COVID-19.

And for the airlines, adding a new city during the pandemic gives them a beachhead to maintain flights after fears of the coronavirus dissipate.

"It has to be a city that we would add in normal times," Southwest CEO Gary Kelly said of the airline's COVID expansion in a September interview. "In other words, this can't just be a pandemic play."

The Dallas-based carrier is due to add six new airports to its map since March: Miami (MIA) and Palm Springs (PSP) on Nov. 15. Montrose (MTJ) and Steamboat Springs (HDN) in Colorado on Dec. 19, and Chicago O'Hare (ORD) and Houston Intercontinental (IAH) in early 2021.

Southwest's expansion is by far the most aggressive of any other airline since the coronavirus hit. And it is not just about establishing itself in new cities — many of the new markets it already serves from other airports — but also about finding new revenue sources as steep losses loom.

JetBlue is notable for using the virus to completely relocate one of its bases. The New York-based carrier closed its long-standing Long Beach (LGB) focus city in favor of nearby Los Angeles (LAX) when the pandemic opened up an additional gate for it to use in Terminal 5. It has also taken advantage of slower-than-normal flight levels to expand in Newark (EWR).

“For us, LAX is the new world and we’re burning our ships,” JetBlue's head of revenue and planning Scott Laurence told TPG at the end of September. The airline added nonstop flights to seven cities on Oct. 7 and will add another nine new routes by year-end. It hopes to grow the LAX base to 70 daily flights in five years.

Related: Airlines get a break on slot rules at New York, Washington airports

The South Florida-based budget carrier is notable for opposing the FAA's plan to extend slot waivers at big airports. Spirit called the move "unacceptably protective of dominant incumbent carriers" in a letter to the agency. Prior to the pandemic, the airline sued for more access to Newark — something it has since gained as a result of the crisis.

The benefits have even trickled down to niche carrier Sun Country. At the Boyd forum, CEO Jude Bricker told TPG that the pandemic has allowed the airline to add flights in Houston and Los Angeles that it otherwise would not have.

“Our focus right now is market share capture in our home markets," he said, indicating that bolstering its presence at its Minneapolis/St. Paul (MSP) home is top of its list.

Big airports have seen some of the steepest declines in flights. An Oct. 10 weekly analysis of schedules by air service development advisers Campbell-Hill Aviation Group found that flights will be down the most at Atlanta (ATL), Chicago O'Hare, New York JFK, LAX and San Francisco (SFO) airports in November compared to pre-pandemic plans. Much of this is driven by the deep cuts to international flying.

Two of the airports listed by Campbell-Hill — LAX and O'Hare — are among those seeing new domestic competition as a result of the pandemic.

The reset in U.S. airline maps is not without its losers. Delta Air Lines has suspended flights to at least 16 cities across the U.S. indefinitely. These destinations range from Akron-Canton (CAK) in Ohio to Bangor (BGR) in Maine and Lincoln (LBK) in Nebraska.

Delta spokesperson Drake Castañeda told TPG that it hopes to return to these cities “as demand resumes.”

Related: Delta has suspended flights to 16 cities across the US because of coronavirus

In addition, American Airlines has suspended service to 11 smaller communities — four less than initially planned — through at least the end of November as a result of the crisis. The airline has only officially ended service to Oakland (OAK) and suspended flights to Worcester indefinitely.

Still, the CEOs of Southwest and United Airlines have said that, if losses continue to mount and there is no additional federal aid, they could cut some service too. The former has not suspended any cities to date while the latter has indefinitely put flights to Stockton, California (SCK), on hold, Cirium shows.

"We’re sticking to bringing the airline back to our core hubs," Delta senior vice president of network planning Joe Esposito told reporters during the Boyd forum. This includes adding some new flights, for example between Atlanta and Boise (BOI), and Los Angeles and Reno (RNO), as well as growing its hub in Salt Lake City (SLC) in response to more travel in the West.

Delta does not plan to follow Southwest and enter new domestic airports that it previously did not serve, Esposito said when asked.

United stands alone among the big three — as American, Delta and United are colloquially known — for aiming to use the pandemic to expand. The airline reportedly hopes to return to New York JFK after a six-year hiatus in 2021.

Looking toward the future, the COVID-19 crisis appears to be far from over. At the Boyd forum, most estimates for when air travel will return to 2019 levels put that recovery pessimistically in 2025 or 2026. That is a long time for airlines to continue to reshape their maps — whether that's JetBlue and Southwest nosing their ways into previously constrained airports or American, Delta and United "suspending" service to small cities across the country for the duration.

"We’re on a good path," Delta president Glen Hauenstein said during the airline's third quarter earnings call on Oct. 13. "We know we’re closer to the end of the pandemic than to the beginning but we don’t know how it’s going to evolve to the end.”

Related: Delta CEO talks recovery, says we ‘have no documented transmissions onboard our aircraft’