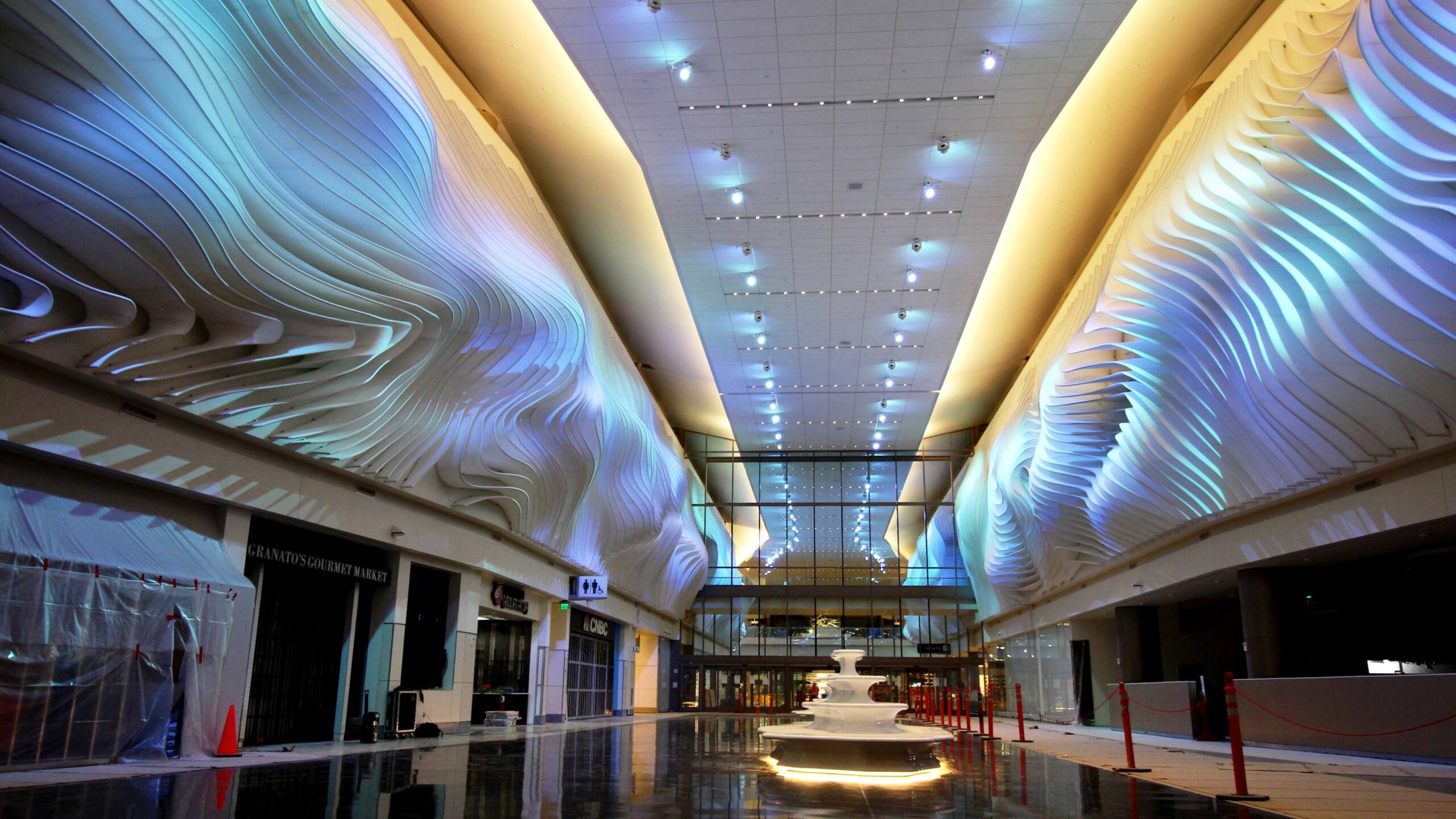 Salt Lake City airport, Delta to open new canyon-inspired terminal on Tuesday
This post contains references to products from one or more of our advertisers. We may receive compensation when you click on links to those products. Terms apply to the offers listed on this page. For an explanation of our Advertising Policy, visit this page.

Flyers on Delta Air Lines Flight 3540 are in for a treat when they land in Salt Lake City after the short 50-minute hop from Idaho Falls on Tuesday.

After flying over some of Utah's peaks and valleys, maybe with a view of the Great Salt Lake, passengers on DL3540 are the first scheduled to arrive in the new 4 million square foot terminal at the Salt Lake City International Airport (SLC).

Years in the making, the terminal complex features a design inspired by Utah's slot canyons and will be able to handle up to 32 million flyers a year. This is a far cry from the 10 million travelers that the three separate terminals and five concourses it replaces were designed to handle. Those aging facilities date to 1961, and — in the words of Salt Lake City mayor Erin Mendenhall — are “on multiple forms of life support."

Delta and its affiliates will use the new terminal and the first 25-gate section of Concourse A that open Tuesday. A parallel satellite Concourse B with 20 gates that will house Alaska Airlines, American Airlines, Delta, Frontier Airlines, JetBlue Airways and United Airlines opens Oct. 27. At that point, the old facilities will be closed and demolished to make way for phase two of the new complex.

The opening comes amid the devastating coronavirus pandemic, but also at something of a golden age for American airports. New terminals and concourses — all years in the making — are opening across the country in places from Nashville to New York to Portland, Oregon.

These are just some of the tens-of-billions-of-dollars' worth of airport investments that were planned prior to the pandemic. Many works already underway will be completed, though some projects that hadn't moved past planning stages are being paused or put on hold indefinitely.

Related: US airlines ‘fighting for survival’ with no hope of V-shaped recovery

While Salt Lake City authorities could wait to begin work on the second phase of the new terminal — a 22-gate extension of Concourse A and an 11-gate extension of Concourse B — there are not yet plans to do so, executive director Bill Wyatt told TPG. The airport is critical to Delta, which sees the coronavirus as an opportunity to reduce costs by accelerating work instead of hitting the pause button.

The airport hopes to shave as much as two years off work on the second phase. It now aims to open the Concourse A and B extensions in 2022, rather than 2024.

Still, the pandemic has taken a bite out of Salt Lake City's plans. The new terminal will open with roughly half of the concessions planned following the COVID-related drop in air traffic, said Wyatt. And while traveler numbers have recovered faster than in other places, he noted that they remain down about 65% compared to 2019.

The new terminal in Salt Lake City is a "foundation for Delta’s continued growth in the western U.S. when we move into the recovery," Delta CEO Ed Bastian told staff in a memo on Aug. 27. He called the opening a "refreshing" break from constant barrage of COVID-19 news.

Salt Lake City is one of the carrier's four core hubs alongside Atlanta (ATL), Detroit (DTW) and Minneapolis/St. Paul (MSP). And while Bastian has acknowledged that Delta will be smaller than it was pre-pandemic, he and other airline executives have repeatedly assured staff that the core bases — plus coastal hubs in Boston, Los Angeles, New York and Seattle — will return.

“The folks in Atlanta really view Salt Lake as the only tool to make their mini-hubs in [Los Angeles] and Seattle work," Wyatt said. "This really is how they make their connection to the West work.”

Related: Delta will return to all of its hubs, many focus cities after coronavirus

Delta will fly roughly 43% of what it flew a year ago in September, according to Cirium schedules. However, its Salt Lake City hub — strategically located in the middle of the Rocky Mountains where holidaygoers have flocked in search of social distance during the pandemic — will be down just 23% compared to a year ago.

Salt Lake City has been Delta's primary western hub since it acquired Western Airlines in 1987. Western established its hub in 1982 as an alternative to congested Denver, advertising it with the tagline "the fastest hub in the west."

“As everyone who travels by air knows, airports and aesthetics are not always synonymous," Utah Lt. Gov. Spencer Cox said at an unveiling ceremony for the terminal on Aug. 27. "English humorist Douglas Adams remarked: ‘It can hardly be a coincidence that no language on Earth has ever produced the expression ‘as pretty as an airport.’”

In contrast, he said, the new Salt Lake City terminal is “truly beautiful and breathtaking."

In creating their image for the new terminal, architects at HOK in collaboration with artist Gordon Huether drew on Utah's natural dramatic features, including the state's signature long, narrow and deep "slot canyons." The hall immediately post security is dubbed "The Canyon" for its design, which is meant to emulate its natural inspiration.

“How the filtered light shifts — it shows the geological layers, the reds [and] the greens," HOK regional lead of aviation and transportation Matt Needham told TPG. "It’s definitely a beautiful environment and [gives] a sense of Utah.”

That local feel was a key focus in designing the new terminal for both the architects and local community, he said. Other aspects include large windows with vistas of the nearby Wasatch Mountains that are unique to Salt Lake City's location.

Of course, the layout is not unlike so many other terminal-plus-linear-satellites airport designs of the past forty years. Strikingly similar to the layout of the Delta terminal in Detroit, it also resembles Atlanta, Denver (DEN) and even Terminals 2 and 5 at London Heathrow (LHR).

This increasing ubiquity in airport layouts — as uninspiring as it can be — is not without its benefits. It offers airlines, particularly hub carriers, the "highest efficiency for airline operations," said Needham. And efficiency, plus the lower costs that entails, are music to the ears of airline executives.

Travelers will benefit from the efficient layout as well. With just two concourses connected by an underground tunnel, flight connections will be simpler to navigate than in the old five-concourse facility. In addition, both Concourse A and B are wider than the old concourses allowing space for moving walkways, more concessions and larger gate areas with outlets and other useful amenities.

One amenity Delta flyers will appreciate is new Delta Sky Club that will among the airline's largest. And in keeping with Salt Lake City's western locale, it features an outdoor fire pit — just don't plan on roasting s'mores before a flight.

“[We’re] changing the entire physical model of the airport," Wyatt said. "The new terminal is "so much more efficient for aircraft and passengers... it’s just a stunningly beautiful and functional facility.”