Articles
Zach Griff is a senior reporter at TPG. He writes travel and product reviews, deep dives into loyalty programs, news about the airline industry and more.
Follow
May 09, 2020
•
8 min read 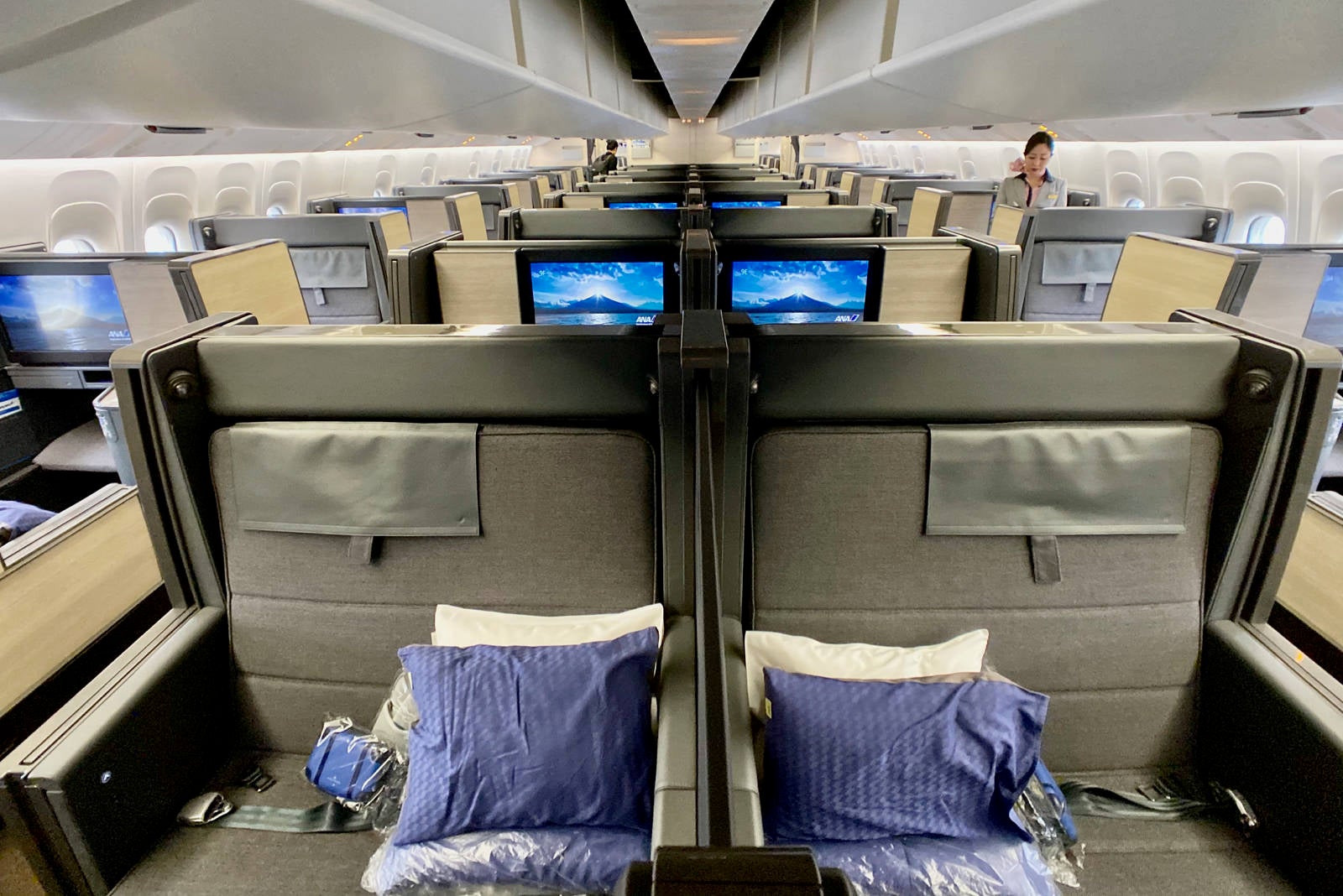 The coronavirus pandemic has halted travel around the world.

As one of TPG's biggest travelers, it's not unusual for me to log over 100 flight segments in a year or fly around the world in 48 hours. But now, I've been grounded for about two months.

Fortunately, I'm physically healthy, but it's been a long time since I was last at home for eight weeks straight. And while I'm dreaming of the day that travel safely resumes, I miss it dearly (turns out, I'm not alone).

One way that I cope with the fact that I'm grounded is by looking back at my Instagram feed (follow me!) and reliving some of my favorite travel memories. And since I love flying and all things aviation, let's take a trip together down memory lane and look at 10 of my highlights.

Throughout the pandemic, we've seen airlines quietly retire large swaths of their fleets. Many carriers are bidding farewell to the Queen of the Skies — the Boeing 747 – and others are retiring the gas-guzzling Airbus A340.

But there's one plane type that's near and dear to my heart, and that's the McDonnell Douglas MD-80. Delta's the last remaining domestic operator of this plane type, and the Atlanta-based carrier announced that it'll fly its last remaining flight this June.

Last September, the other big U.S. operator of the MD-80, American Airlines, retired its remaining Mad Dogs with a celebration in Roswell, New Mexico.

I was fortunate enough to attend the event, and loved every minute of it. I got to fly on one of the last AA Mad Dogs and hear from Doug Parker, American's CEO, about what the plane meant to him.

Related: Where planes go to die: A guide to aircraft boneyards

You can relive that celebration by reading my behind-the-scenes look at the Super 80 sendoff.

Squeezing in an overhead bin

As part of the American MD-80 retirement party, the airline had stationed one aircraft next to the event hall that attendees could check out.

Naturally, that meant that I took some shots in the cockpit and in different seats. But then my curiosity got the best of me — could I fit in an overhead bin?

Turns out, I could. Thanks to some help from Ed Pizzarello, I managed to climb up in into the bin. It was tight and I was sore for a few days after, but the pic I got was priceless.

In January of this year, I flew what I called the "new gold standard" for business class. Last year, ANA introduced a brand-new business- (and first-) class cabin that immediately wowed us at TPG.

For a while, it was nearly impossible to find award availability. Plus, the carrier only has a subset of its Boeing 777s outfitted with the latest cabins.

But I managed to snag a great paid fare ex-Hong Kong for January, so I was the lucky TPGer to fly the new product.

Suffice to say, it really impressed me and is arguably better than the Qatar QSuite. And now, with United relaxing its upgrade policies for ANA flights, you can enjoy The Room with just 25,000 United miles or 40 PlusPoints.

As an aviation geek, my bucket list is filled with random flights on obscure airlines. But one thing that I hadn't yet checked off was flying the world's longest flight.

At over 9,500 miles, Singapore operates a once-daily service on its Airbus A350-900ULR from Newark to Singapore. Getting a ticket on this flight is quite expensive, especially if you're looking to fly in biz, but I managed to snag a pretty sweet redemption through Alaska Mileage Plan.

With over 17 hours in the air, I loved every second of the flight. I even wrote a separate post with 18 thoughts I had while flying the world’s longest flight.

Sitting in the engine of a Dreamliner

I love everything about planes, from the inside to the outside. And the thing I admire most about airplane design is the engines, particularly the massive ones found on wide-body jets.

So when I went on a three-day behind-the-scenes tour of LAX, I couldn't pass up the opportunity to get a picture inside an engine.

My time came when a United 787-9 Dreamliner had just arrived from Shanghai. Since the plane had quite a long time on the ground, I was able to get the coveted shot.

Related: Why United’s new 787-9 Dreamliner is a massive upgrade for travelers

Can I fit in the cargo hold?

I didn't just get the chance to sit in the engine of that United Boeing 787-9.

I also had the opportunity to observe the cargo handlers work their magic. As the flight was coming from abroad, it was carrying a ton of goods. Interestingly, most of the items onboard were souvenirs headed to Disneyland.

After watching the handlers unload pallet after pallet, the cargo hold was finally empty. Zach Honig and I grabbed a shot together, but neither of us could stand up straight. The cargo hold isn't nearly as high as you'd think.

Related: How passenger planes are converted into cargo jets

About a year after that picture was taken, we've now seen airlines convert these passengers planes to temporary cargo jets to carry life-saving medical supplies around the world. How times have changed.

We at TPG do some crazy things to fly interesting planes and routes. One such example is my trip to the Caribbean last December.

Aside from checking out three islands and reviewing some awesome hotels like the Park Hyatt St. Kitts, I also got to fly British Airways while I was there.

Yes, you read that right. I flew the UK flag carrier between two islands in the Caribbean. Turns out that BA actually flies a bunch of fifth-freedom routes in the Caribbean as part of a triangle flight to and from London.

There was something really special about flying a Boeing 777 for just 20 minutes, even if the plane was quite dirty.

Checking out the crew rest

Did you know that the crew sleeps on long-haul flights?

That's right. There are dedicated crew rests on most of the world's largest passenger jets. I got to tour one such area on a Boeing 787-9 Dreamliner.

I was quite impressed with how big it was. The beds looked much longer than those in business class and it was certainly much quieter up in the crew rest.

Another plane to feature a crew rest is the Boeing 767. American's version of the now-retired jet featured one of the coolest crew rests out there. Though the seats weren't the most comfortable, passengers could request to sit in them when the plane wasn't operating long-haul flights!

I spent 36 hours in the desert sun capturing one of the coolest airport timelapses you'll see.

As part of that project, we saw areas of the Las Vegas airport that are normally off limits to the public, including the underground baggage belts.

This is where all the checked bags are sorted before being driven to their planes. After filming a ground handler load bags for a flight to Houston, I had the opportunity to ride the tug from the central terminal to the plane's gate. It was so cool!

I'm somewhat cheating here since I haven't actually flown the United Island Hopper just yet. But it's been on my AvGeek bucket list for ages, and it's (hopefully) going to happen this year.

For the uninitiated, United operates a flight between Hawaii and Guam that stops at five different islands in the Pacific Ocean. The 14-hour flight is operated by a Boeing 737 and it serves as a lifeline for many of these islands.

Though 14 hours on a narrow-body plane may sound like hell to some, I can't wait. Stay tuned because there's going to be lots of content coming from that trip!

Though I might be grounded, I've got lots of amazing travel memories from my time at TPG. Hopefully we'll all be allowed to safely take to the skies once again and resume creating even more memories.

In the meantime, keep your eyes peeled to TPG for more flashbacks, and follow me on Instagram if you liked what you saw above.

Our points-obsessed staff uses a plethora of credit cards on a daily basis. If anyone on our team wouldn’t recommend it to a friend or a family member, we wouldn’t recommend it on The Points Guy either. Our opinions are our own, and have not been reviewed, approved, or endorsed by our advertising partners.
See all best card offers
Related stories
News
Now live: Chase Freedom cardholders can earn 5% back on PayPal and Walmart purchases this quarter
News
Hurricane Ian: Airlines join relief efforts, offer bonus miles to customers who donate
Guide
Marriott Bonvoy Bountiful credit card review: Solid sign-up bonus with limited perks
News
Cruise lines begin resuming ship departures from Florida ports that closed due to Hurricane Ian