18 thoughts I had while flying the world’s longest flight, from Newark to Singapore 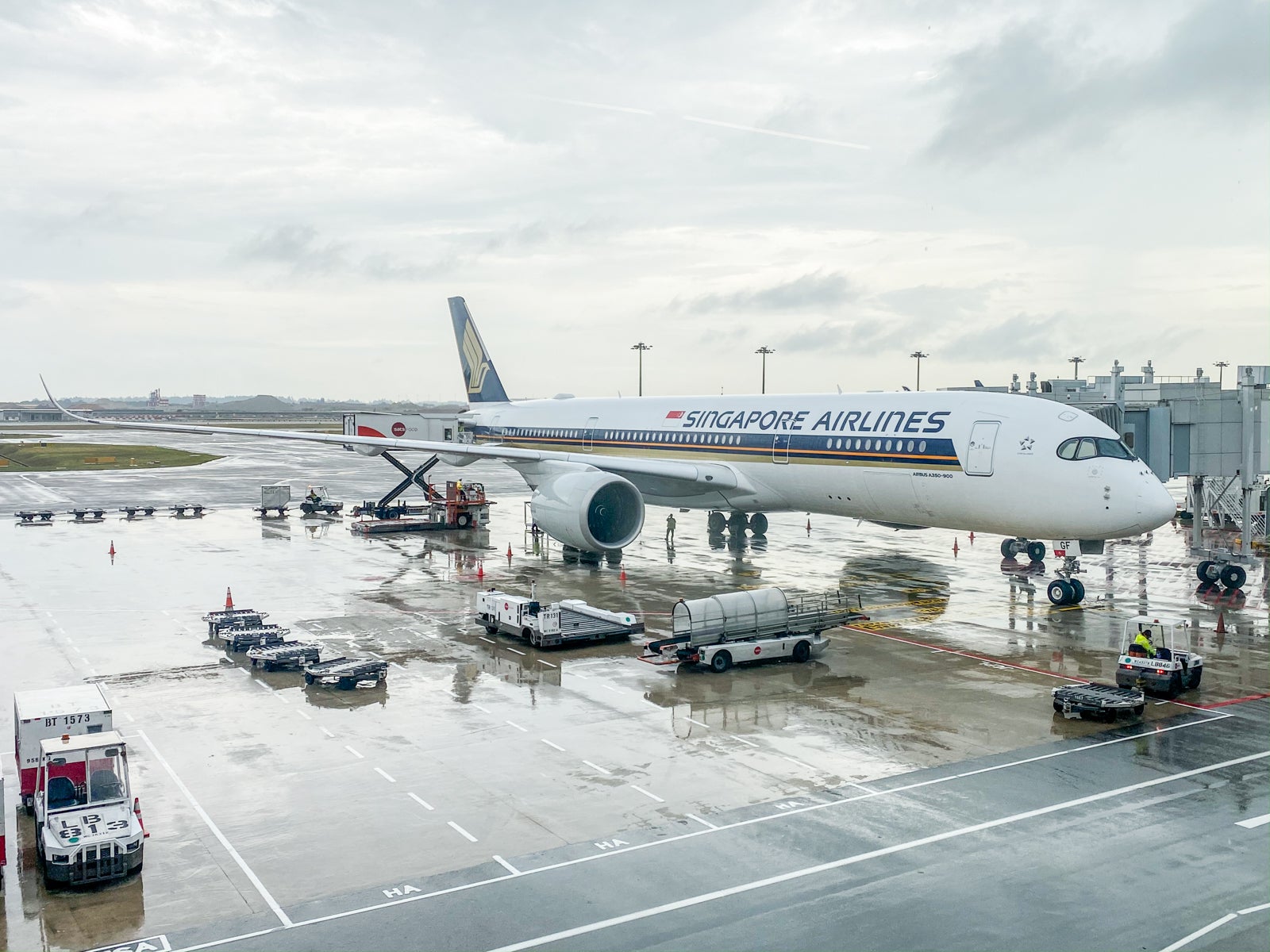 18 thoughts I had while flying the world’s longest flight, from Newark to Singapore
This post contains references to products from one or more of our advertisers. We may receive compensation when you click on links to those products. Terms apply to the offers listed on this page. For an explanation of our Advertising Policy, visit this page.

The world’s longest commercial flight, SQ 21 from Newark to Singapore, is blocked at 18 hours and 30 minutes and covers a distance of over 9,500 miles. When I flew this route a few weeks ago, I had lots of time to let my mind wander, so I compiled a list of 18 thoughts, each corresponding to the over 18 hours I spent aboard the Singapore Airlines Airbus A350-900ULR.

Hour 1: Why did I preboard this flight?

I’m usually the world’s worst gate louse when it comes to boarding flights I'm reviewing. There’s only a short window of opportunity to get clean pictures of the cabin before passengers start filing on to the plane. That’s why I always aim to be the first to board.

Being first to board also means that I usually spend an additional 30 to 45 minutes on the plane before even pushing back from the gate. After the first hour in the air after preboarding at Newark Liberty Airport (EWR), I began questioning why I willingly spent an additional 45 minutes aboard the plane. Then I looked through my camera roll and was reminded that it all paid off.

As an AvGeek, I was so excited for this flight that I only got four hours of sleep the night before. No surprise, then, that I got really tired right after takeoff. Fortunately, I could rely on my adrenaline to power me through the journey. Even though I was exhausted, I managed to stay up for the first 10 hours of the flight.

Hour 3: The best cocktail in the sky

There’s lots to love about flying with Singapore Airlines. One of my favorite things, though, is the Singapore sling, a cocktail made of gin, Dom Benedictine, orange liqueur, cherry brandy and pineapple juice that was invented in 1915 at the Long Bar in the Lion City's legendary Raffles Hotel. As lunch service wrapped up, I decided to order a third sling, telling myself that it was definitely 5 p.m. somewhere along our route.

Hour 4: This is the shortest day ever

Although it was only 1:45 p.m. Eastern time at this point, the sun began setting, making this one of the shortest days I’d experienced. I immediately wondered whether I was flying on Nov. 19 or Dec. 22.

At this point, it was about 3 p.m. back in New York, and I decided to connect to the Panasonic Wi-Fi network to check in with the office. Singapore offers free Wi-Fi to business-class passengers, but it took me just 10 minutes to run through my 100 MB of free data.

I purchased another 200 MB package, but that didn’t last me much longer. All right, I thought, time to watch some TV.

Hour 6: Are we going the right way?

I began questioning whether I boarded the right flight when I looked at the flight map and saw that we were flying east across the Atlantic, just south of Greenland. I assumed we were going to fly close to the North Pole, but the strong winter winds obviously had a mind of their own.

I wasn’t totally bummed to miss a visit to Santa, since we ended up flying 10,476 miles, about 200 miles longer than Qantas' Project Sunrise flight from New York-JFK to Sydney (SYD).

KrisWorld, Singapore Airlines’ signature inflight-entertainment system, was remarkable. There were over 300 movies and 700 TV shows. I definitely didn’t get bored on this flight, even after my Wi-Fi package elapsed.

In fact, I could’ve flown this flight every day of the month and still had a new movie or TV show to watch.

My legs were definitely feeling swollen after sitting for over nine hours, so I headed to the back galley behind premium economy and did some stretches.

Getting my blood flowing felt great, and I began wondering if there were an instructional YouTube video for airplane galley yoga. Too bad I didn’t have Wi-Fi to find out.

Hour 9: Should I buy something from duty free?

I’d already completed one movie and finished a few chapters of my book, so it was time to check out the literature pocket. I pulled out the KrisShop catalog and perused the duty-free items for sale.

Ever since comparing duty-free prices at over 50 major international airports, I’ve been fascinated by the duty-free market. It didn’t take me long to realize that SG$237 (about $175) for a 750-milliliter bottle of Johnnie Walker Blue Label was a pretty good deal.

Hour 10: Everyone is on a different schedule

With over 17 hours in the air, it was no surprise that everyone had a different strategy for tackling the flight. Some people went to sleep immediately after takeoff, and others, like me, stayed up for as long as possible before going to bed. I was impressed that the crew did a great job adjusting food and beverage services to meet passengers’ schedules.

I was getting quite peckish, so it was time to raid the snack bar. I chose SunChips, rice crackers and my favorite, Tate’s Cookies. Eating Tate’s chocolate chip cookie immediately brought back memories of long summer days soaking up the sun in Long Island.

Aside from periodically getting up for yoga stretches, my other jet-lag buster is drinking lots of water. Throughout the flight, the flight attendants did a great job of keeping my glass filled. In fact, they were so good that by this point I'd drunk over 30 glasses of water.

Hour 13: My Apple Watch is not happy with me

I’m pretty active on a normal day. Between walking to work and going to a workout class, I easily hit my daily move and step goals. My Apple Watch has recognized this pattern, so it’s no surprise that I got a ping in the middle of the flight saying that my activity was well below my normal average. With nowhere to go and no more yoga moves left in my arsenal, it was time to turn off my watch.

Hour 14: How are the cabin and bathrooms still spotless?

Singapore Airlines is known for its legendary service, and this flight was no exception. Flight attendants kept coming through the aisles every 20 minutes, checking on passengers and refilling drinks. Unsurprisingly, they also did a great job at keeping the cabin and bathrooms spotless.

Although I was exhausted, I had a really tough time sleeping on this flight. Singapore’s business-class seat may be one of the widest and most spacious in the industry, but it’s not very comfortable. Even though there was a mattress pad, the bed was still pretty hard. The footwell was tiny and awkwardly aligned with the bed, making it hard to get in a comfortable position.

Singapore definitely deserves credit for providing passengers with three pillows. But that still wasn’t enough to help me catch some z's.

Have you ever felt like a reptile? Me neither — until SQ 21. Airplanes are notoriously dry because of the cabin pressurization and recycled air. Even though I constantly applied hand lotion and moisturizer, my skin felt as coarse as a reptile by now.

When I’ve flown with Singapore Airlines in the past, I’ve always been annoyed at how hot the crews kept the cabin. And since most Singapore planes don’t have personal air vents, you’re at the mercy of the crew’s whims when it comes to your comfort.

Before boarding, I was worried I'd be stepping foot in a sauna for the next 18 and a half hours. However, on my flight, the crew did a great job at using the air conditioning. They kept the cabin at 72 degrees Fahrenheit, which was perfectly pleasant for both sleeping and relaxing.

Thankfully, I don't need an 18th thought, since we landed much earlier than our blocked flight time of 18 hours and 30 minutes. In fact, it took us just 17 hours and 54 minutes to traverse the 10,000-plus miles from Newark to Singapore (SIN).

That's what it's like inside the mind of someone who flew on an almost-18-hour flight. I definitely got antsy and bored at times, but Singapore Airlines has done a great job of making time fly by. As an AvGeek, I enjoyed every minute of the world’s longest flight. Stay tuned for a full review of Singapore Airlines business class on the Airbus A350-900ULR.

Related stories
Should you buy Marriott points with a 50% bonus?
5 secrets to getting a luxury cruise for less
Deal alert: Widespread Air Tahiti business class award space to French Polynesia
This no-annual-fee card earns 2% cash back on every purchase — and automatically applies your rewards
Featured image by (Photo by Zach Griff/The Points Guy)