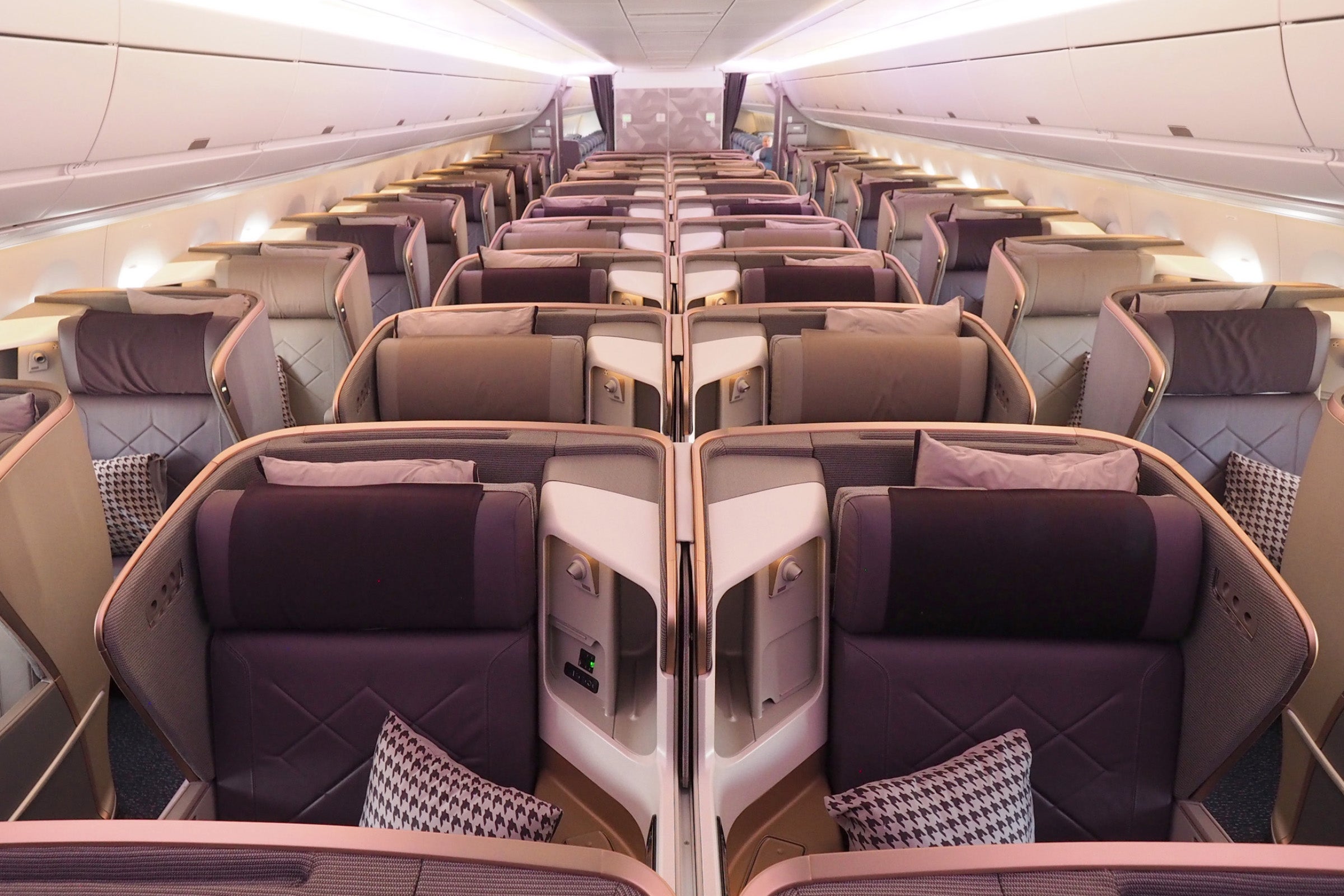 Two years ago, Singapore Airlines restarted nonstop service between Changi Airport (SIN) and the United States, flying daily to San Francisco (SFO) with the Airbus A350-900.

While that long-haul jet can handle the 8,500-mile trip to SFO, it isn't quite capable of reaching two of SQ's other top US markets: New York (EWR) and Los Angeles (LAX). Thanks to a new Ultra-Long-Range model, the A350-900ULR, that changed this week — Singapore has just relaunched the world's longest flight, flying daily between SIN and EWR.

Aside from some fuel tank modifications, both A350 versions are virtually identical outside — the cabin is an entirely different story, however. The regular A350 carries 253 passengers in three cabins — business, premium economy and coach — while the ULR version accommodates just 161 — 94 in premium economy and the remaining 67 in business class.

With a spacious 1-2-1 arrangement, 67 business seats is an awful lot for a single-deck plane, and it shows — most of the A350-900ULR is occupied by business passengers, spread between two cabins.

There are just 23 seats in the forward cabin, and a whopping 44 in the far larger cabin behind.

The rear cabin really is gigantic, so keep that in mind when you're trying to decide where to sit.

First, let me just come right out with it: There are no perfect seats on this plane. The most comfortable options are just behind the bulkhead walls, bar none, but that means they're very close to the galleys, so light and noise will be an issue. That said, if you're tall, you really don't have a choice but to book a bulkhead seat — if you can get one.

The most comfortable seats are located at the windows directly behind the two bulkheads. In order, I'd choose:

The center bulkhead seats would be my next pick, since they have gigantic footrests, though they're a bit less private, since they're positioned together in the middle of the plane. In order, I'd pick 11D or 11F, and then 19D or 19F — Row 19 should be your second choice, since it's at the front of the largest cabin and located just behind the busier galley.

I would certainly do my best to avoid booking any center seats one row behind the bulkhead, or in the very last row of each cabin, since you'll be dealing with more light and noise from the galleys, without the benefit of a large footwell.

Generally, I'd avoid the rear cabin if preferred seats are open up front — there's simply far more traffic, and it'll take longer for a flight attendant to reach you.

And, honestly, if you're especially tall, I don't think you'll be comfortable in any of the non-bulkhead seats. The footwell is simply too small, and the angled position doesn't help. If you're over six feet, I might even consider connecting flight options before booking a non-bulkhead seat on this plane.

Singapore's Airbus A350-900ULR will operate all of the airline's nonstop flights to Newark and Los Angeles, and select flights to San Francisco. Flights include:

Most partner programs don't offer awards in Singapore's newer premium cabins — to book a seat there, your best bet is to ticket your flight through SQ's own KrisFlyer program. Fortunately, it's easy to boost your KrisFlyer balance, thanks to partnerships with the three major transferrable-points currencies, including:

Singapore's new A380 business seat is far more comfortable, and versatile — the A350 seat has limited recline, and requires a flight attendant to fold the seat into bed mode, while the new A380 seat can recline into the full-flat position on its own. Unfortunately, the airline opted for its flawed A350 seat for the ULR, and taller customers will pay the price whenever they can't land a bulkhead seat.

That said, being able to fly nonstop between Newark or Los Angeles and Singapore is a huge time-saver for business travelers, and easily worth the comfort compromise for those on a time crunch. The airline's catering, entertainment and service is among the best in the biz, too, so if you're able to look past the seating challenges — or you can confirm a bulkhead assignment — you can expect a pleasant experience overall.