A 'Double Bed' in Biz: A Review of Singapore's Brand-New A380 Business Class 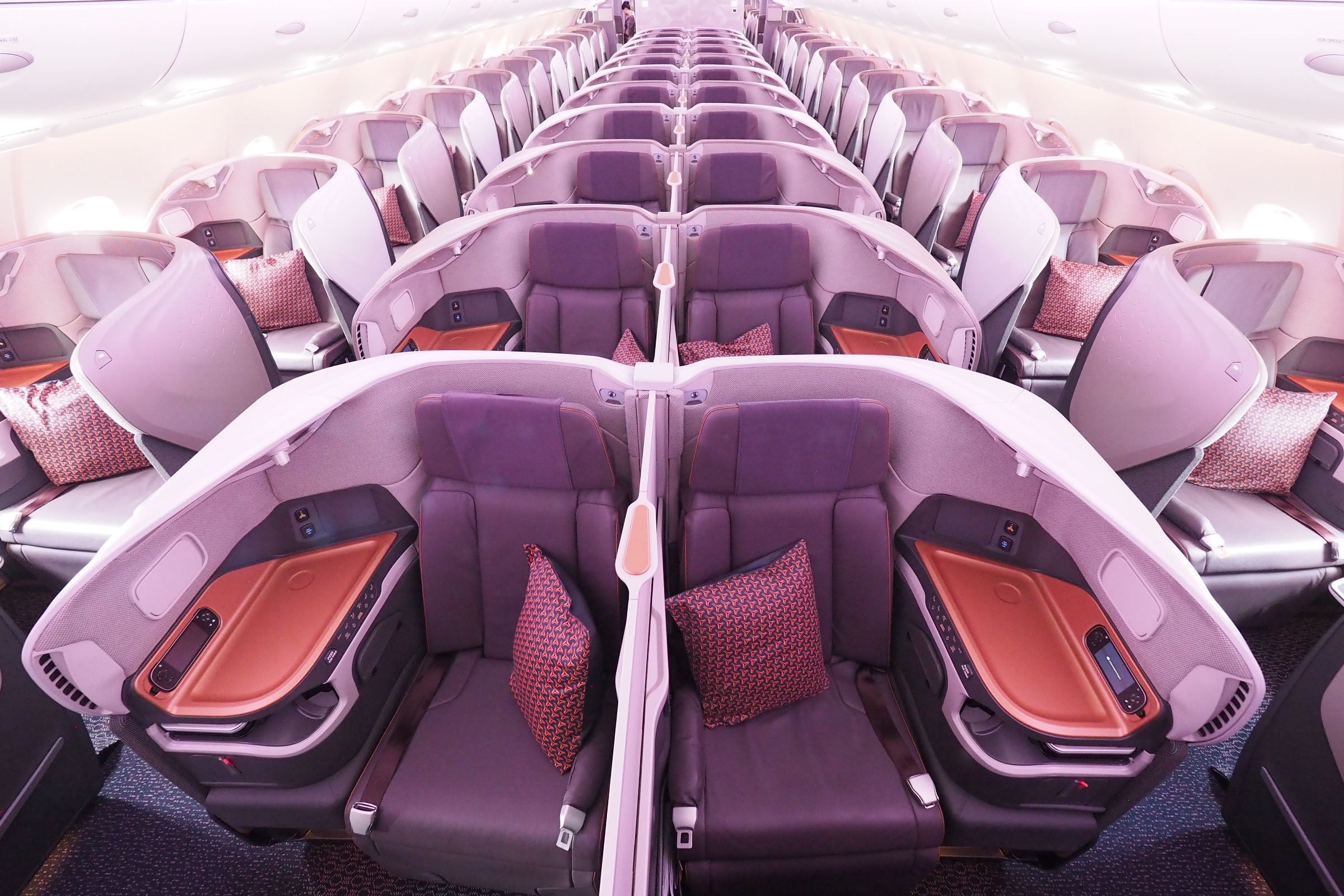 I love traveling on any Airbus A380, but Singapore's latest variant is a whole different beast. It's the first plane to offer the carrier's incredible new first-class suite, but business class isn't too shabby, either.

While I managed to travel in a business-class seat on this same A380 during its delivery from Airbus HQ in Toulouse, France, this particular plane is so notable that I built an entire round-the-world itinerary around getting onboard a passenger flight, including flights on two other interesting aircraft — Air India's 787 and Malaysia's brand-new Airbus A350.

Almost as exciting as the flight itself was the fact that we managed to book a coveted KrisFlyer saver award — the one-way flight from Sydney (SYD) to Singapore (SIN) cost just 58,000 miles in business class, plus about $70 in taxes. Singapore partners with American Express Membership Rewards, Chase Ultimate Rewards, Citi ThankYou Rewards and Starwood Preferred Guest (SPG), giving you plenty of options to quickly boost your KrisFlyer account.

Currently, the new A380 is only available on one Sydney round-trip each day — Singapore 221 on the outbound from Changi Airport (SIN) and 232 on the return from Sydney. Since 221 is a redeye, I recommend choosing the northbound flight from Australia if you want to get the full in-flight experience. You can book the new A380 on certain flights to London (LHR) and Hong Kong (HKG) as well.

As we explained in our review of Singapore's new A380 suite, this particular flight was a bit out of the ordinary. Because I needed to move back and forth between business and first class in order to photograph TPG, a Singapore Airlines PR representative joined us on the flight. Additionally, my pre-flight time was spent capturing TPG at Singapore's first-class lounge in Sydney, so I didn't have time to visit the regular SilverKris Lounge.

Business-class passengers normally have access to either the SilverKris Lounge or the Air New Zealand lounge around the corner, which I visited briefly ahead of my Thai 747 flight in March 2017.

This time around, we entered through the main SilverKris check-in area before heading right into the first-class lounge, which isn't normally accessible to business-class passengers. I was able to get in as TPG's guest, however, since he was flying first class and I was departing on the same flight. I don't want to cause any confusion by including those pictures here, though, so head over to our suite review to see Singapore's first-class lounge at SYD.

After a snack and a glass of Veuve Clicquot Champagne, it was time to make our way on to 9V-SKU, Singapore's first A380 with the new seats.

Singapore's latest A380 has 78 business-class seats, all on the upper deck. By comparison, the airline's older A380 offers 86 seats, but 20 are located where the suites are positioned now, so this new plane actually fits more seats — 78 in total — in the same space occupied by 66 seats on the older plane.

Seats are arranged in a 1-2-1 configuration, with 50 seats in the large center cabin — located just behind first class — and another 28 in a smaller cabin at the rear of the upper deck. All seats are more or less the same, though center bulkhead seats in rows 11, 91 and 96 have significantly more room for your feet.

I was hoping for an empty seat next to me so I could try out the new "double bed" mode, available exclusively in the center seats. I grabbed a seat in the very last row of business class since I figured that'd be my best shot at having an empty seat next door.

That gamble paid off! The rest of row 97 ended up going out empty — not only did I get my own double bed; there also wasn't anyone to give me nasty looks as I took a million pictures of my seat, bed and food.

Singapore's new seats are fairly private, but if you want even more space to yourself I suggest grabbing an "A" or "K" window seat.

Center "D" and "F" seats are ideal for couples, but you can keep the center partition up for the entire flight if you're sitting next to a stranger. A flight attendant can lower the divider even further to create the "double" bed.

While there's enough room to place a small bag under the foot rest, storage compartments are fairly limited — there's one small storage area to the top right or left of the screen, as you can see below:

And then another even smaller compartment below, with a fold-up door.

And a small compartment to the side of the seat, though that's barely large enough for magazines and the menu.

There's plenty of exposed storage space, though, thanks to the oversized side tables. I ended up storing my laptop on the side table for much of the flight.

The controls are fairly high-tech, but you can't control individual sections of the seat — options are limited to lie-flat or a couple different recline presets. That said, recline has been improved with this version, and you can raise and lower the leg rest individually as well.

There's a power outlet and a high-wattage USB port, along with a credit card reader that may eventually be used for duty-free purchases.

The highlight is definitely the "double" bed — it's far more confined than what you'll find in the first-class suites, of course, but it's still nice to be able to sleep next to a partner.

The one thing I really don't like is how absurdly small the footwell is — unless you're at a center bulkhead seat, you need to sleep at an angle, since the tiny space is positioned at the far left or right in front of your seat. It's barely wide enough to store the bedding, as you can see below.

After a few minutes I forgot that I was positioned at an angle, but it's definitely an unusual feeling at first. I also found the bed to be a bit firm, but I didn't try to sleep during this daytime flight.

While first-class passengers flying up front on the new A380 get Lalique amenities to take home, Singapore doesn't offer kits in business class. There are some items available in the lavatories, though, including toothbrushes and shaving kits, and eye masks and ear plugs can be requested from the crew.

Passengers also receive high-end bedding to use during the flight, including a mattress cover, comforter and two pillows. Flight attendants will prepare the bed when you're ready to sleep, including lowering the center partition if you wish to sleep next to a companion. I found the bedding to be comfortable, and while the cabin wasn't hot, I was too warm to stay under the comforter without a dedicated air vent.

There may also be some Singapore-branded teddy bears on board, so be sure to ask if you're traveling with kids!

On the in-flight entertainment front, this system is a huge step up from what you'll find on the older A380s, and even the IFE available on Singapore's A350s. The noise-canceling headphones are pretty decent, and they're comfortable to wear as well.

One new IFE feature is the ability to link the system with your KrisWorld account, which allows you to pre-select films, access additional content and even save your place in a movie or TV show, so you can pick up right where you left off on a future flight.

The in-flight map was especially high-resolution, too, and you can adjust the position and view.

You can control content either directly on the main screen, or via the wired touchscreen remote.

The new A380 also offers much-improved Wi-Fi, which was priced at $20 for 500MB of use during the flight. The purchase page listed that as a limited-time promo, though, so the rate may have jumped to $30 now.

As I mentioned, this was an unusual flight. My primary objective was to capture TPG up in first class, so I ended up missing the entire meal service in biz. The crew held my Book the Cook entree and the other items as well, and delivered my meal course-by-course later in the flight. I did receive a glass of Champagne before departure, though.

Then, a couple hours into the flight I asked to begin my main meal, which started with another glass of Champagne and some mixed nuts.

The first course was a fresh-tasting prosciutto salad, which was served with artichokes and roasted peppers.

A flight attendant also came by with a selection of bread, including garlic bread and some mixed rolls, all of which seemed fresh.

For my main course, I used Singapore's Book the Cook option to pre-order the seafood Thermidor, which I compared to the lobster Thermidor TPG was served in his suite.

This was easily the highlight of the meal — while there was a lot of sauce, the white fish and scallops were tender and delicious, as was the buttered asparagus served on the side.

Then, for my dessert I had the tiramisu and a bowl of ice cream.

I also asked to see the cheese board, though I wasn't hungry for more food by that point.

Finally, I was served a small shrimp and vegetable dish before arrival, which I didn't enjoy nearly as much as my main course.

There's no question that this A380 represents a huge improvement over Singapore's already comfortable older superjumbo config. I was relieved to see that the seats recline more now, since they don't fold over into a bed, but the footwell issue prevails — there just isn't enough room for your feet with this design, unless you luck out with a spot at the center bulkhead.

The food was good and the flight attendants were personable and overall exceptional, as they've been on my previous Singapore Airlines flights.

That said, the crew could clearly tell that TPG and I were onboard to review the new product, since we needed to get special permission — and a PR escort — to bring me back and forth to first class. I wouldn't expect different service on an "ordinary" flight, though some of the amenities — namely the stuffed Singapore bears that are normally reserved for children — were likely only made available because of my special "status" on this flight.